The Rogers Centre is on its last legs, destined to be replaced in the not-too-distant future with "a new stadium as part of a downtown Toronto redevelopment."

While it still seems like a relatively new stadium to those of us who grew up in the SkyDome glory days, the since-renamed 1989-opened stadium has actually slipped all the way down to the 23rd newest stadium in Major League Baseball. Or the seventh oldest. 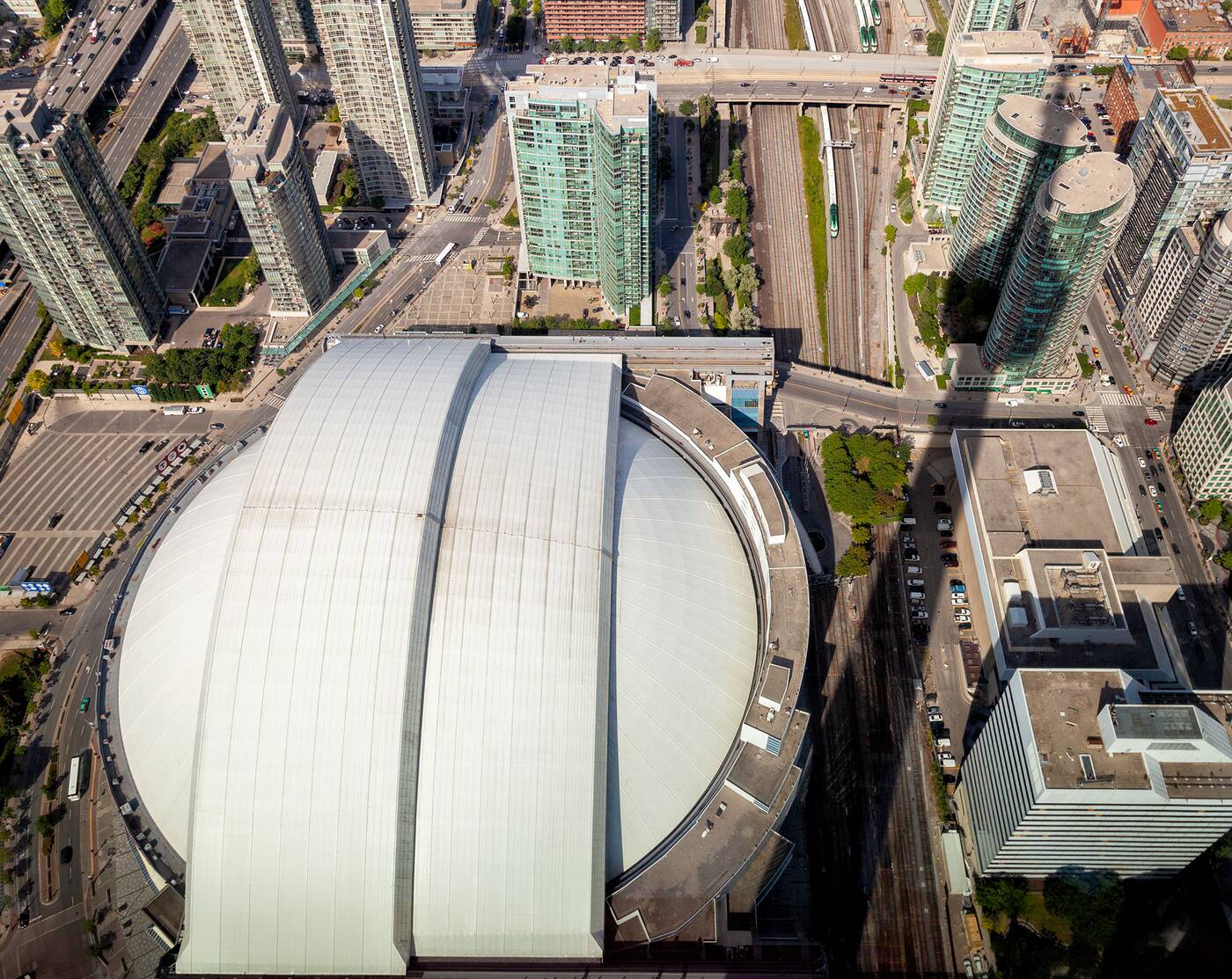 The Rogers Centre is no longer the technological marvel it was considered upon opening as SkyDome in 1989. Photo by Jack Landau.

It may be beloved in Toronto, but it's easily one of the most hated stadiums among players and fans abroad, consistently placing near the bottom of MLB ballpark rankings.

Rogers and Brookfield Asset Management Inc. have revealed little in the way of details as to what we have in store, but that hasn't stopped one intrepid stadium fan from creating a concept design for a new downtown ballpark.

It's still very much a work in progress, but the design was first shared via Twitter on Thursday.

Since @BlueJays are looking to replace Rogers Centre in near future (at same location), working with @architecturejks to build a concept retractable roof stadium (in progress).

A ballpark aficionado living just outside of Savannah, Georgia, Mark Anderson started the @MLBcathedrals Twitter account to share what he's learned and connect with other ballpark nerds in the Twitterverse. He's since amassed almost 105,000 followers.

The exterior features a video board/marquee inspired by Scotiabank Arena (also in Toronto) that includes a stage below for pre/post game events. pic.twitter.com/zn97b1V77q

And while he lives a good 1,600 kilometres from Toronto, Anderson is still surprisingly familiar with the history of our not-so-new technological marvel on Bremner Boulevard.

The exterior features a video board/marquee inspired by Scotiabank Arena (also in Toronto) that includes a stage below for pre/post game events. pic.twitter.com/zn97b1V77q

"While the Skydome did set a precedent for retractable roof ballparks (it was tried and failed miserably at Montreal's Olympic Stadium), it came at the tail end of the cookie-cutter multi-purpose era. A wonder of the world at the time, it became quickly outdated in the baseball world when Oriole Park at Camden Yards opened in 1992." 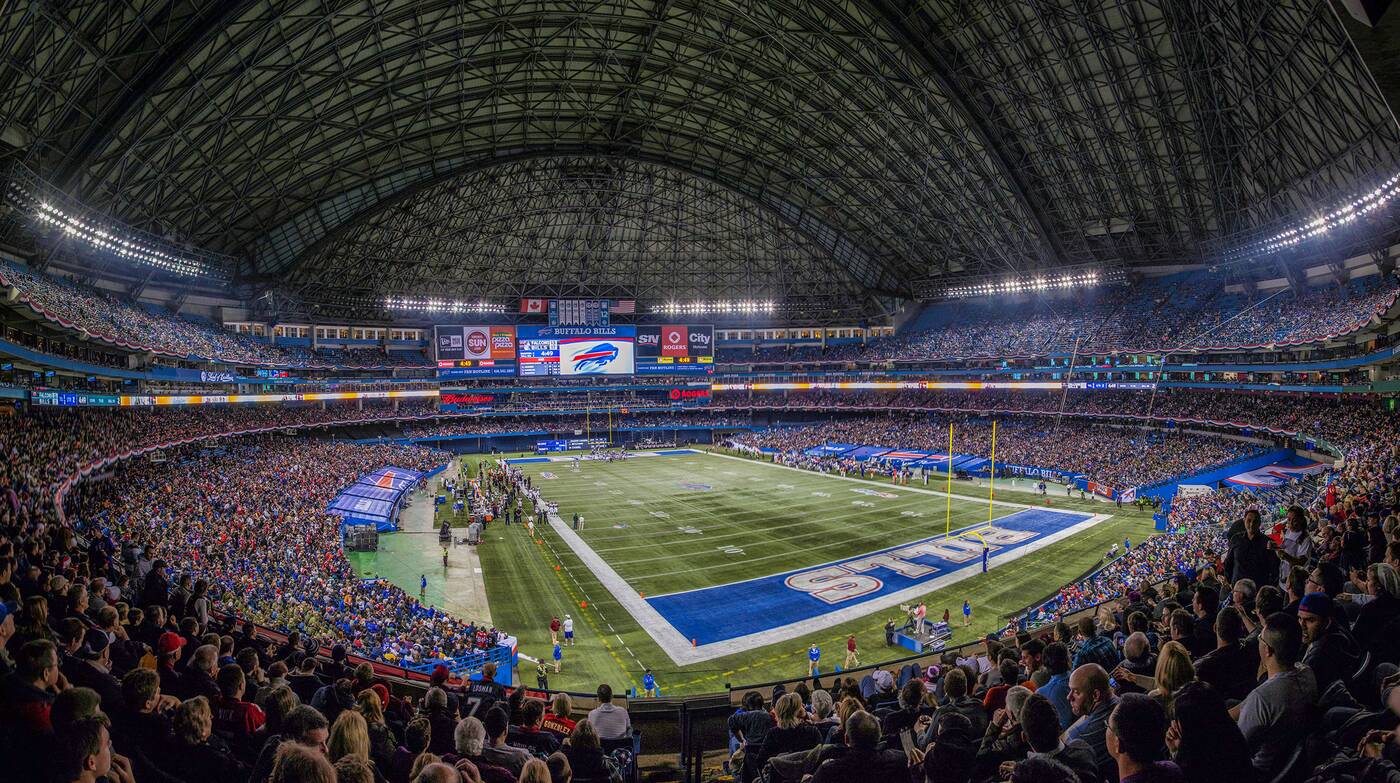 The Rogers Centre was built to accommodate football as well as baseball, making for awkward sightlines and a cavernous interior. Photo by Jack Landau.

Camden Yards changed baseball, leaving Toronto's still-new megaproject in the dust of a new era of retro-modern ballparks. But it wasn't just the look of Camden Yards that made the dome feel like a white elephant, it was the way it was built for baseball fans rather than multi-sport versatility.

"The brick, wrought iron details of retro Camden Yards are not necessarily what outdated the Skydome/Rogers Centre. There have since been non-retro ballparks like Target Field and Nationals Park, but it was the sightlines and intimacy of a baseball-only facility."

These design standards have become the norm, and while it is widely expected that any new baseball-specific park in Toronto would draw heavily from the last three decades of stadium design, there's no evidence the Jays — still a relatively young franchise — would go retro.

Still, retro is precisely the direction Anderson took his unsolicited stadium pitch for Toronto, starting upon learning that the Blue Jays were looking to replace Rogers Centre with a new stadium on the exact location.

And while Anderson certainly did his homework, drawing influence from Toronto landmarks past and present, don't let him hear you call his design retro.

"I wouldn't call the design retro or retro-inspired," says Anderson. "When I hear retro, I think brick and wrought iron."

"This would be a lot of stone and a lot of glass. Former Toronto landmark Maple Leaf Stadium and its arches will have a large influence, but so will other structures such as the Birkbeck building (Heritage Foundation building) and Brookfield Place. A fusion of old and new." 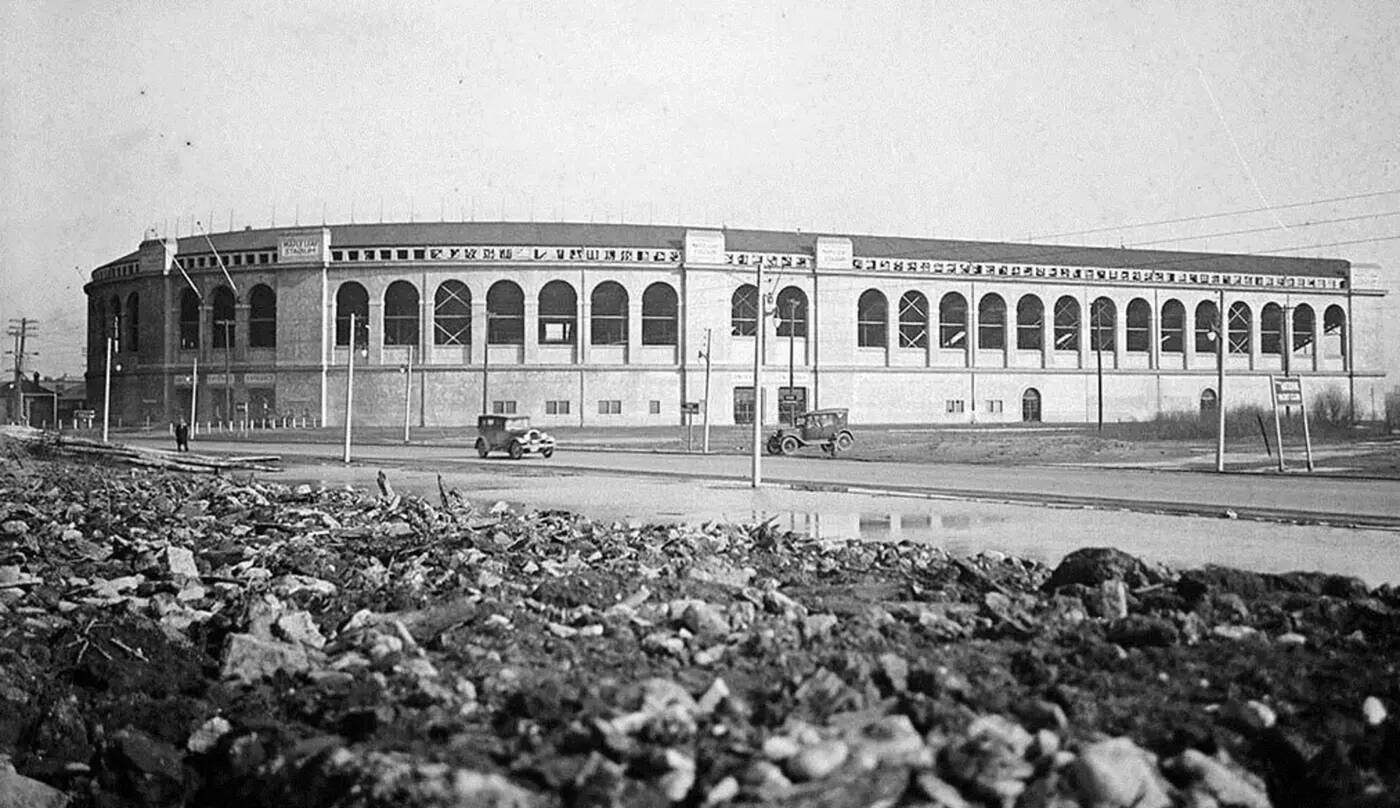 Even recognizing cold-climate roofless stadiums in Minnesota and Detroit, as well as his personal preferences for ballparks without retractable roofs, Anderson presumes, "with a high degree confidence, that anything that replaces Rogers Centre will have a retractable roof the encloses the stadium for cold April and September/October days and nights."

Anderson teamed up with friend Jack Stamm of Middlesex, New Jersey, with Anderson handling the majority of stadium design and Stamm providing the painstaking graphic design elements along with valuable feedback.

"While Jack and I have already put many hours into this project, the images and details you see are just the beginning. We plan on getting pretty detailed to include the CN Tower, which will be located just beyond right field," says Anderson.

The result (still evolving as this is being typed) is something that Anderson feels can deliver Blue Jays fans "a ballpark with great sightlines, real grass, and a more intimate feeling that can also be used for concerts and other off-season events."

"Besides that, the driving force behind this design is to give fans something they don't have at Rogers Centre, as much of an open view of the Toronto skyline as possible while still being protected from the elements." 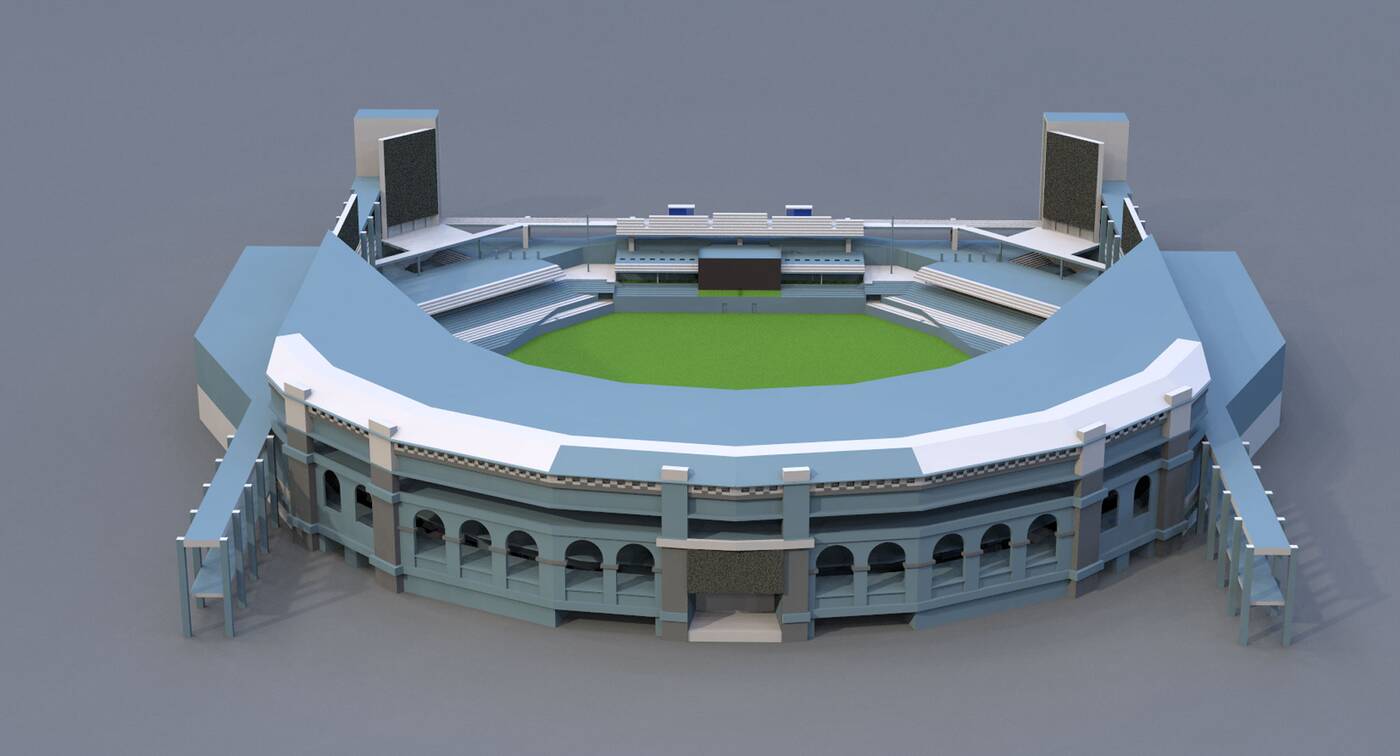 And rebuilding the stadium offers some pretty enticing opportunities to make the Toronto skyline a feature from the stands. Rule 1.04 of MLB states that ballparks should face northeast, though there's a lot of variation in the league. Rogers Centre's home plate faces slightly west of true north.

"If you put a new stadium on the same location but tilted home plate a little more towards the northeast or directly north, the CN Tower and the Toronto skyline would be in direct view," says Anderson.

"Tilt it slightly, and the CN Tower would loom over right field. Tilt a little more, and the CN is in direct center field. You will get the best view of the skyline if the CN Tower is beyond left field, so that's the direction we are leaning."

And it wouldn't just be an open view of the skyline. The concept would offer so much more open sky than fans currently get in the Rogers Centre. 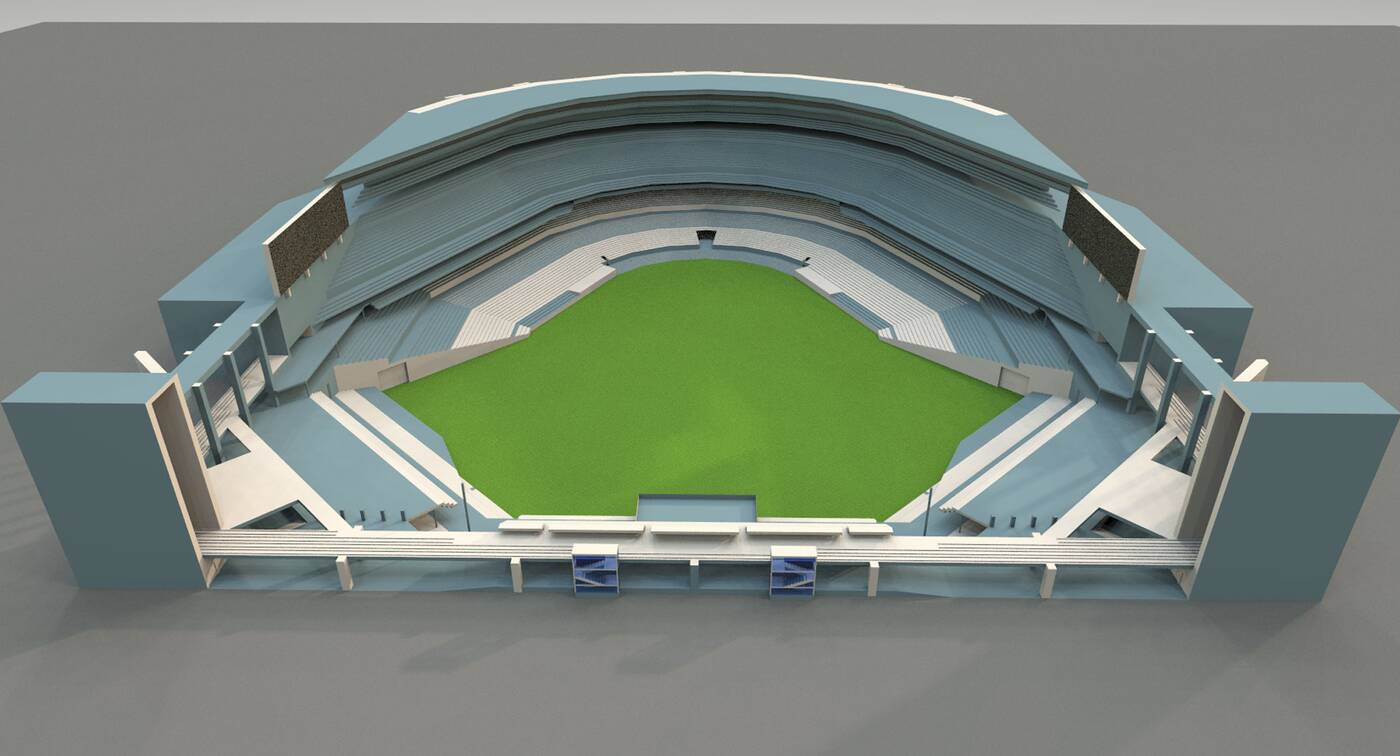 An open outfield could be positioned to frame views of the city skyline. Rendering courtesy of Mark Anderson.

And if there's one thing players and fans want out of any new stadium, it's natural grass. Some fans see it as a difference-maker in signing big names to the Jays, and players have stated their preference for playing on more-forgiving grass surfaces.

"It is my opinion that baseball should be played on real grass," says Anderson. And his design would accomplish this with transparent roof panels that allow UV light to penetrate even when the roof is closed.

What we end up with might look nothing like what these fans have proposed, but it's nice to see ideas being stirred up for what the future of baseball will look like in Toronto.