When Toronto entered Stage 1 of reopening after Ontario's first major pandemic lockdown last spring, golf courses were one of the first outdoor spaces to resume operations.

Golfers were understandably thrilled, but critics took issue with the idea of so few people enjoying so much wide, open and — most pertinently — publicly-owned green space.

While it can cost up to $75 per adult for one 18-hole game at any of these courses, the facilities have actually been losing money for years, prompting discussions about how the land might be better used to serve surrounding communities.

Many ideas have been floated over the years for these underused and at times obstructive courses, from transforming them into huge urban farms to building new affordable housing complexes.

Calls for the city to repurpose its sprawling golf courses have only intensified since the pandemic hit and amplified the importance of access to public space.

The city did, in fact, just install a number of outdoor snow loops at all five golf courses for members of the public to walk, snowshoe and cross-country ski this winter. It's a great start, but what happens when spring comes and golfers want to get back on the course?

Toronto-based architecture studio RevelHouse has an idea that could satisfy the needs of both golfers and non-golfers who simply want more public recreation space. 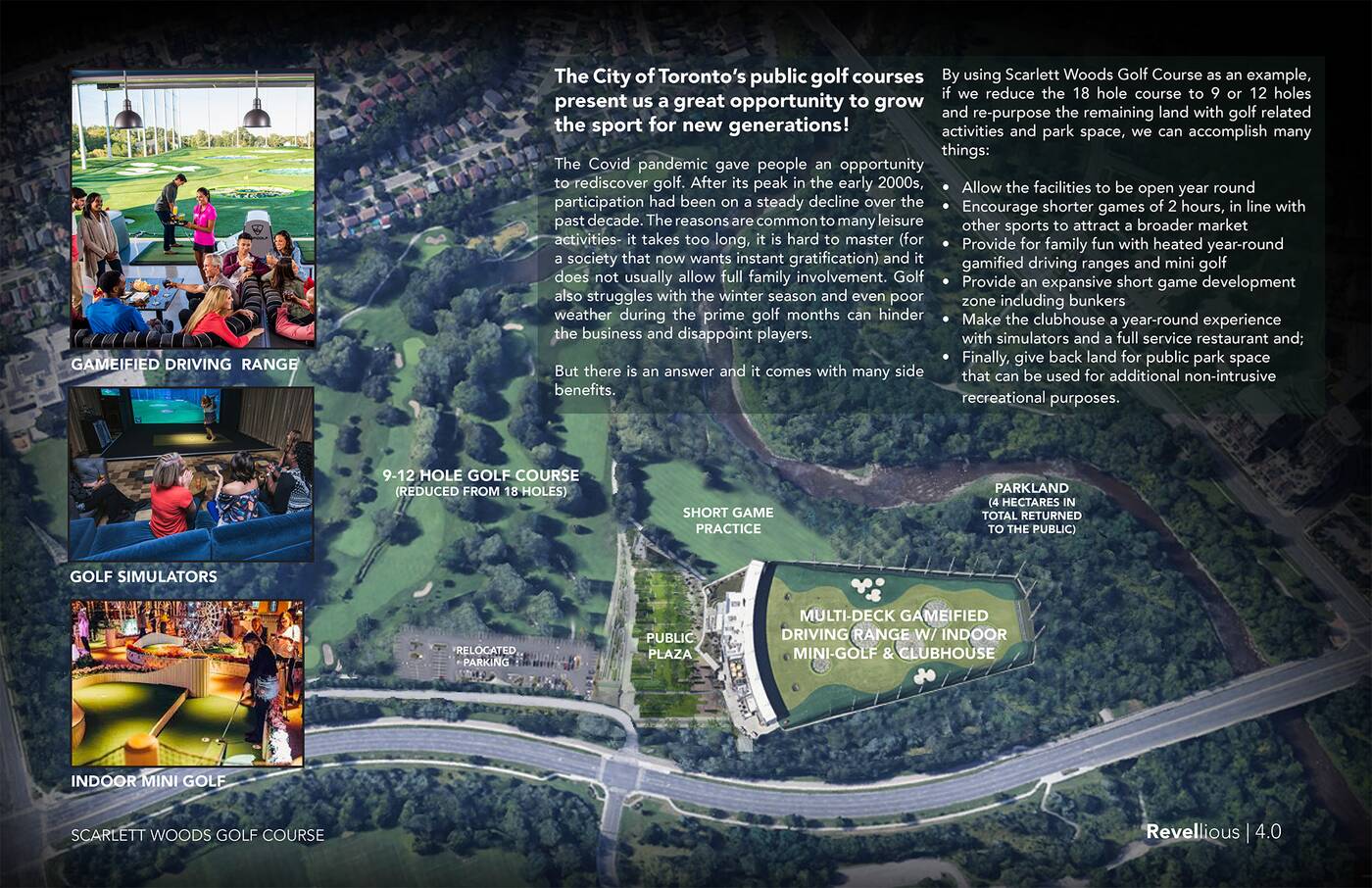 "Golf has had a huge increase in participation due to the pandemic.  In order to remain popular, we believe the municipal courses need to broaden their appeal with some bold moves," said RevelHouse's Joseph McBurney to blogTO.

Using the Scarlett Woods Golf Course as an example, McBurney's team imagined what a "re-tooling" of Toronto's public golf courses to include more park space and golf-adjacent activities could look like.

"By reducing the 18 hole courses and re-purposing the land with golf-related activities and park space, we accomplish many things," notes McBurney, pointing to shorter games of two hours each ("in line with other sports to attract a broader market") as well as "gamified driving ranges" and year-round, indoor mini golf.

In addition to driving ranges, new development zones could be added into the mix, such as short game areas and indoor golf simulators.

The plan additionally proposes re-imagining "the clubhouse experience" with a full-service restaurant and beverage options.

RevelHouse is already in discussion with several partners and the city to test out the concept, though McBurney notes that no formal conversations have taken place with city officials to date.

He does, however, believe that the re-tooling that could help leaders in the city manifest something they've been wanting for decades:

"With the new uses using up far less space we can give back land for public park space — a major desire of the municipal government."