Meditation gyms are becoming a thing in Toronto

If you’ve ever been to a yoga class, odds are at some point you’ve been asked to close your eyes, relax, and clear your mind in some way, whether it’s just for a few seconds, or for a full yoga class centred around mindfulness and meditation.

Many yoga studios are now not only focusing their practice around meditation, but making it their main offering, whereas others are pretty much doing away with the yoga altogether.

Enter Mindset, Yorkville’s newest brain gym. In the summer of 2018, a rash of yoga and meditation studios opened with the promise of harnessing the power of mindfulness to reduce stress and anxiety, and boost happiness and productivity.

Meditation is no longer the realm of “zen,” hippies and granola: packaging it as a gym brings mindfulness into an everyday context for many.

“With a gym, you’re making exercise a part of your routine and you immediately join a close-knit community of like-minded people,” says Sean Finnell, co-founder and “chief experience officer” at Mindset brain gym.

That is, if you consider hanging out in “stillness pods” with immersive audio, being cradled by ergonomic seating and sniffing signature blends of diffused essential oils to be exercise.

Many meditation studios are arguing that for too long mental health hasn’t been taken as seriously as the physical, and that demand from city dwellers for a bit of a mental stretch is overwhelming, though they often don’t know where to start on their own. 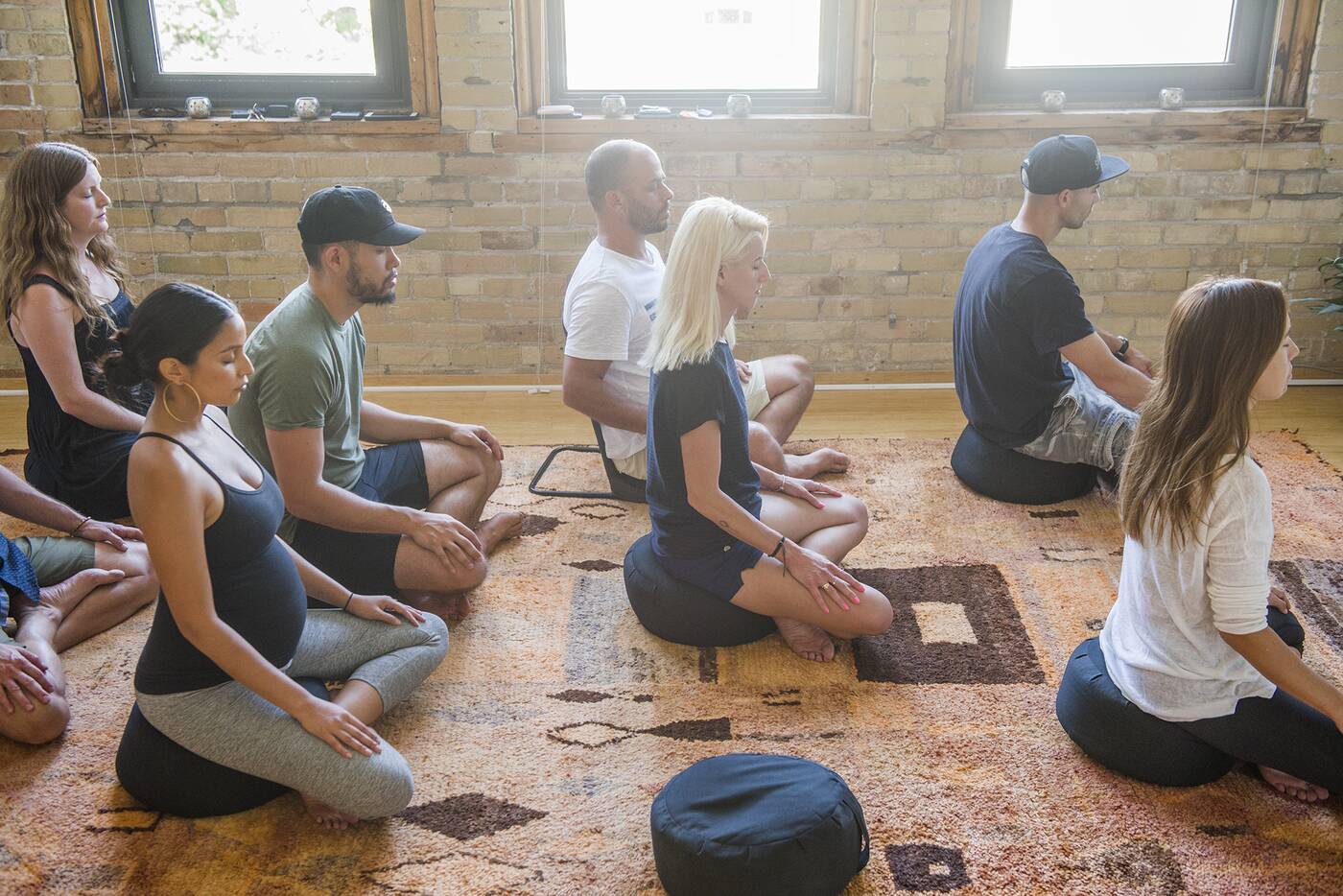 A meditation class at The Quiet Company in Toronto. Photo by Hector Vasquez.

“Mindfulness and meditation can be helpful for managing stress and anxiety but it can be a hard practice to develop on your own as it requires a lot of self-discipline,” says Emily Thring.

She founded The Quiet Company, arguably Toronto’s first modern meditation studio. “Meditating with a group creates an energy that’s very different than sitting by yourself,” she adds.

Stephanie Kersta and Carolyn Plater see Hoame, the 5000-square-foot Toronto meditation space they co-founded, “as a community space centered around the shared practice of meditation.” It might seem counterintuitive to practice something so personal in a group, but Kersta and Plater, mental health clinicians, have found the opposite.

“Science shows us that humans thrive when they feel a sense of belonging and connectedness. Having a space to come together and share this beautiful practice is very appealing to many people, because it gives them a chance to bond with other like-minded individuals.”

Classes in Toronto range from the non-committal Quiet Company with sessions starting at just $10 for only 15 minutes, to drop-ins at Mindset for $25, to $45 for an hour in a highly calming and therapeutic salt cave, making meditation a surprisingly accessible wellness practice. After all, when you think about it, all you need is a mind.

There's also a massive shift in people accepting what was once considered ‘weird.’ Think; sound baths, full moon rituals and crystal shops. Plus, these meditation studios are beautiful, they’re relaxing and they’re different. 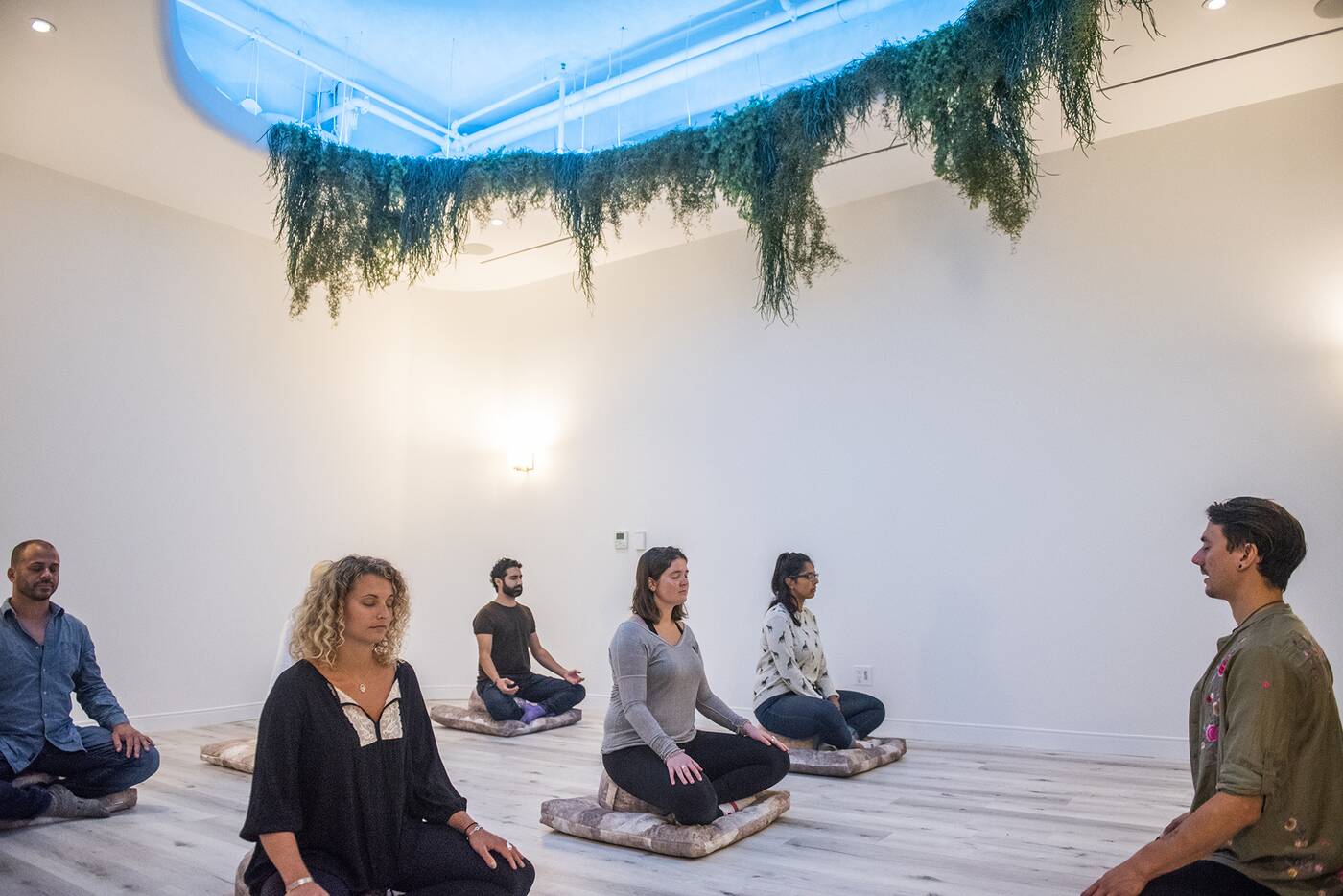 Lighting is a key feature of the meditation rooms at Hoame. Photo by Hector Vasquez.

Like trends before it, this niche interest group appears to be growing and diversifying in order to keep up with demand and the different ways people are embracing meditation.

“While all businesses might be similar in their offerings, each take a unique approach to meditation and in the experience they present to their guests,” offer Kersta and Plater.

I don’t know about spending an hour in a salt cave, but I’ve got 10 bucks and 15 minutes for something that might improve my life as drastically as it’s supposed to.

“The demand for community-oriented meditation is only growing, and I expect we'll see plenty more to come in the years and decades to come,” says Finnell. Time will tell here in Toronto, but Thring over at The Quiet Company argues that in the meantime, “The more people who are meditating the better the world will be!”