Everything you need to know about running in Toronto

Toronto may be a concrete jungle but it's simultaneously a runner's paradise. With a number of picturesque running trails and plenty of events, groups, and stores dedicated to jogging gear, this city is prime territory for runners of all levels to jog it out.

Here's everything you need to know about running in Toronto.

Whether you're looking for a marathon or a quick jaunt, the city's selection of trails has it all. Still, beginners with no experience manoeuvring the city in running shoes should definitely be planning out their route before leaving the house.

The City of Toronto's trail page provides some very comprehensive maps showcasing all the main paths in the city. There's also the ever-popular Great Runs site, which has its own descriptions and detailed maps to help you figure out what kind of run you're looking for. 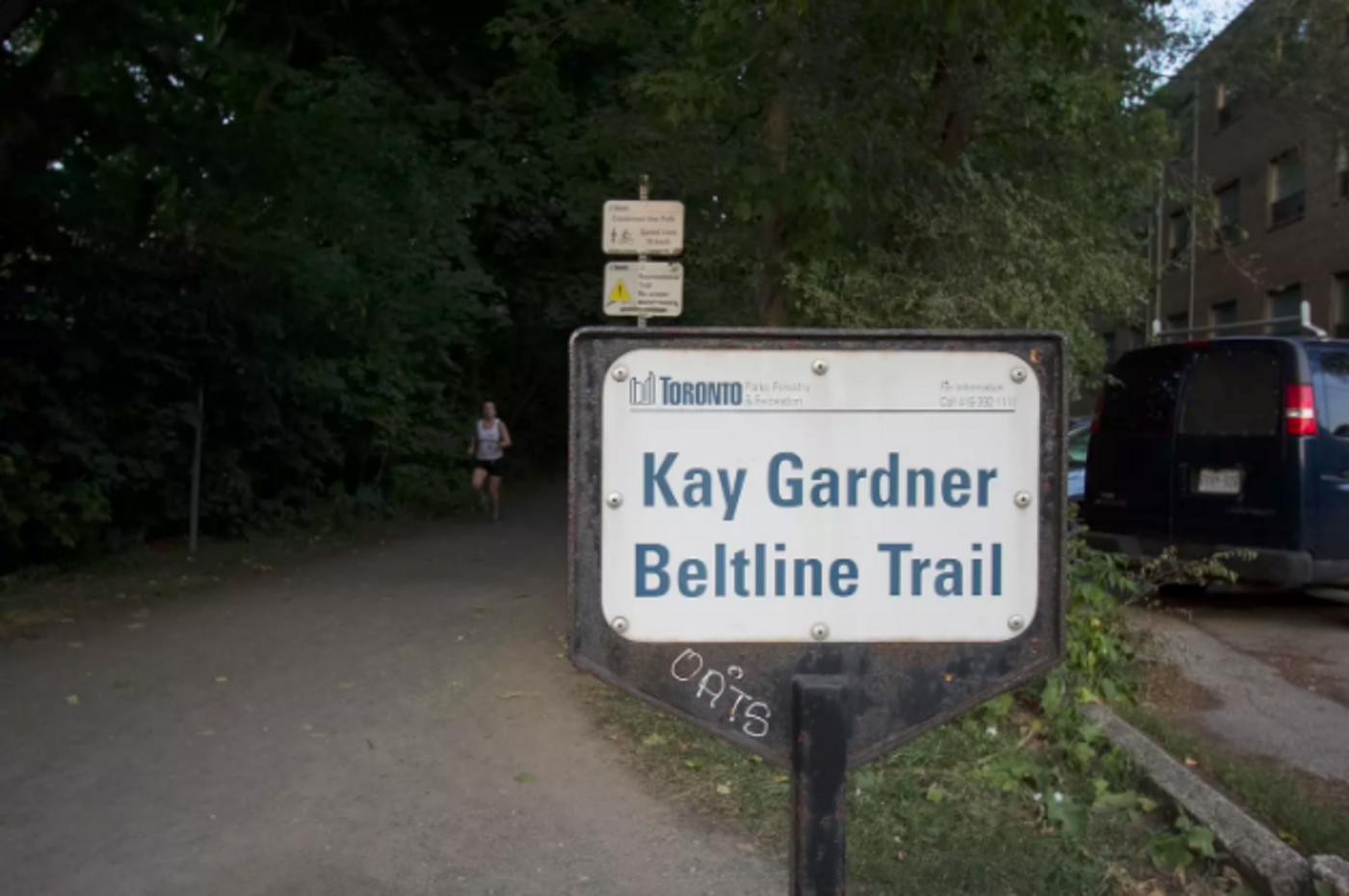 The Beltline Trail is a favourite running route in Toronto. Photo by Tanya Mok.

If you're trying to hit the pavement uninterrupted for long stretches at a time, some of the top trails in the city include popular east-to-westers like the smooth 35-mile Martin Goodman Trail leading through several city parks, and the 9-kilometre Beltline Trail

Good endurance runs include the 400 acres of High Park, where you'll definitely get a glute workout on those hills, and the uphill path of the Don River Trail from the Beaches leading up to Edwards Gardens.

Those who want a more urban experience can take the popular 5-mile Downtowner that goes by some of the city's main attractions like the ROM, the AGO and U of T, or for something scenic yet still urban, there's the Finch Hydro Corridor. 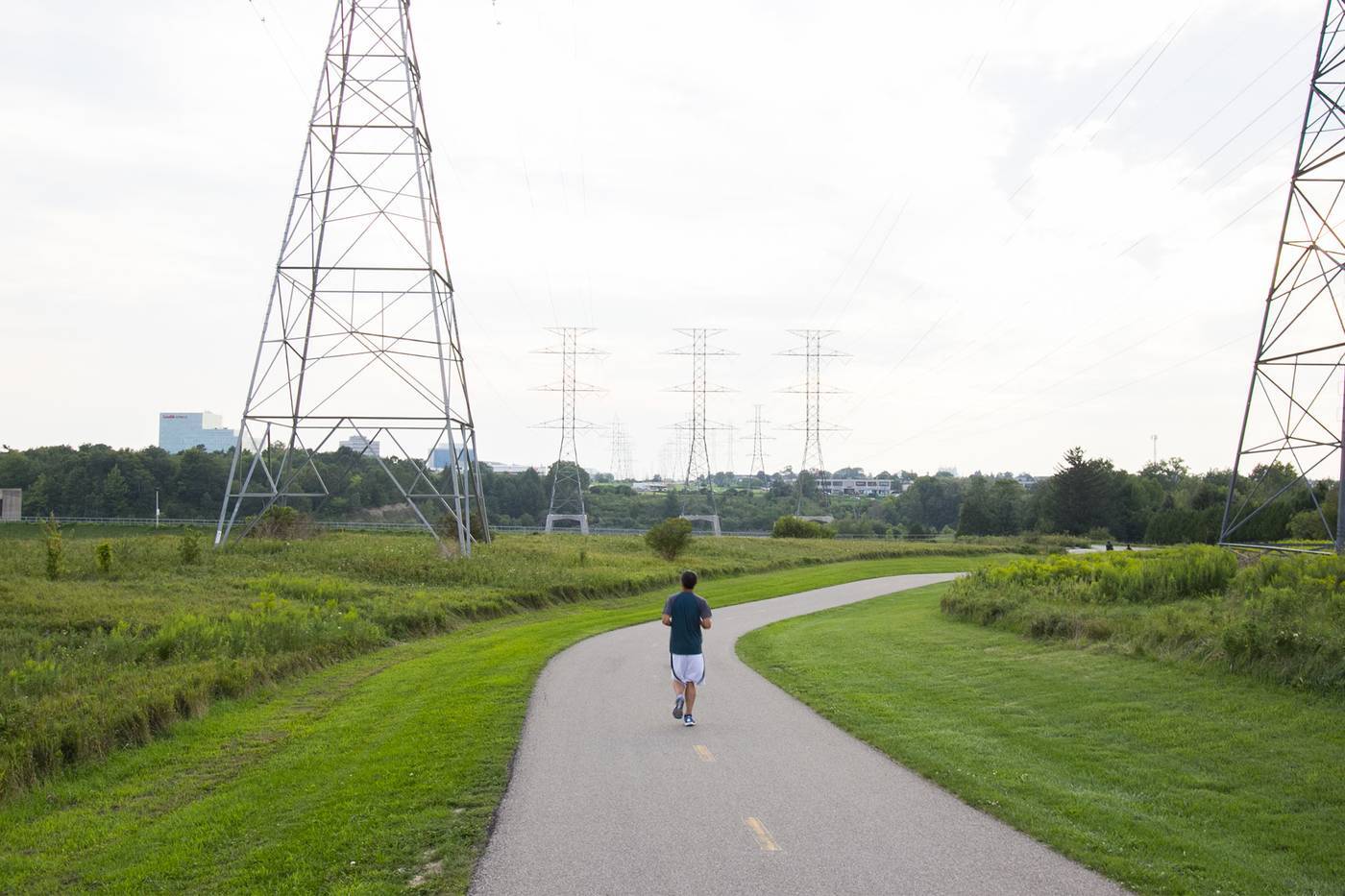 The Finch Hydro Corridor will take you running through transmission towers. Photo by Tanya Mok.

If the priority is ditching the cars to get some fresh O2, there's nothing greener than the network of trails on the east side, mostly nestled in the ravines by the Don River.

You can jog the weathered Redway Road Staircase down to Crothers Woods, a steep spot for mountain biking that's equipped with a popular running loop for beginners. Not far from St. Clair Station, the David Balfour Park Trail is a quickie but a creek-side goodie.

Further southeast, Glen Stewart Ravine is a beautiful path by Kingston Road framed by green walls on either side and equipped with two sets of staircases, one with 114 steps, for a real leg burner.

And for a complete getaway, there's always the Toronto Islands with their paths leading from Hanlan's to Centre to Ward's Islands. You can even try running on the beach for an extra workout—you just need to take a ferry to get there first. 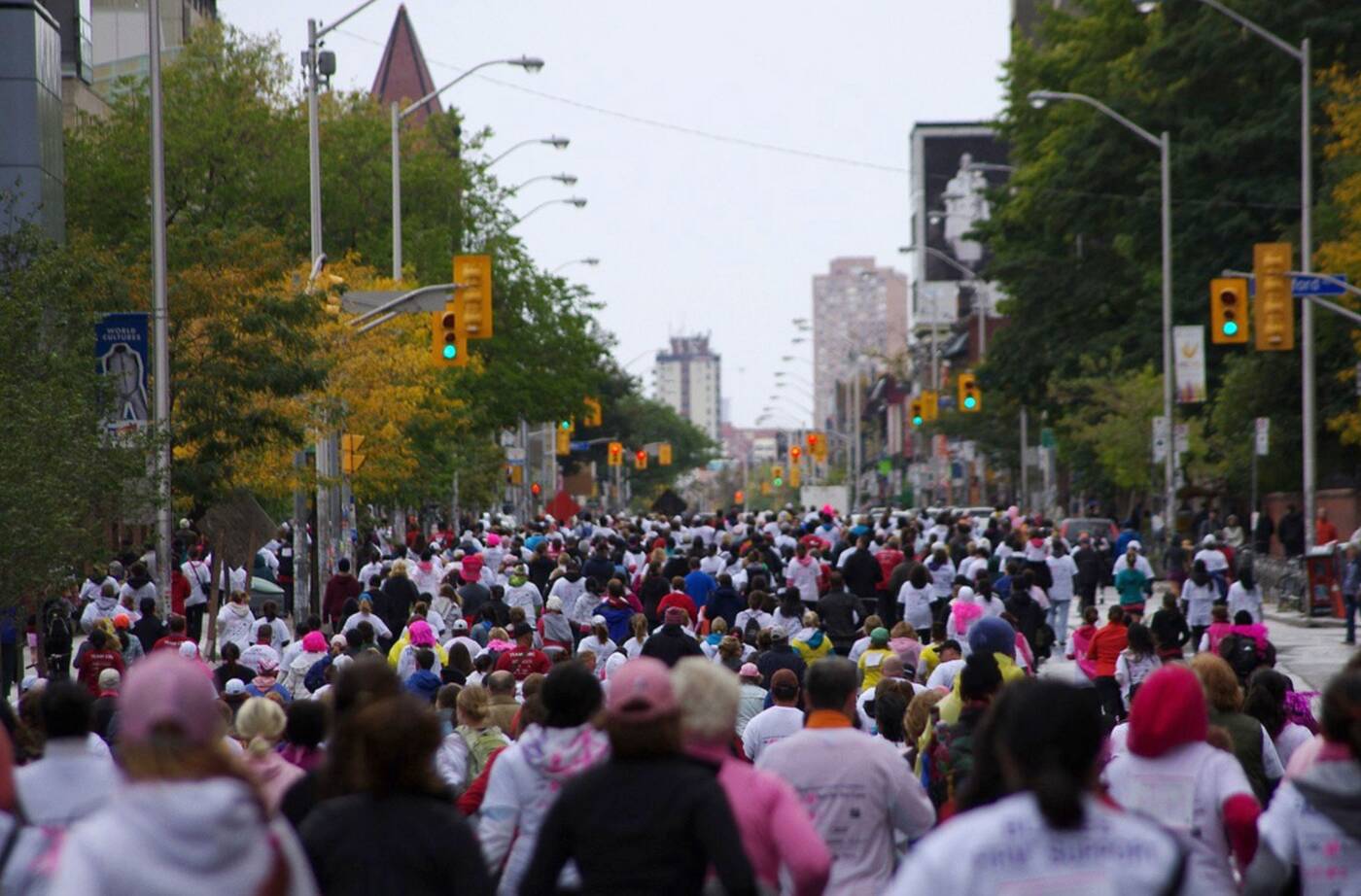 The Canadian Cancer Society CIBC Run for the Cure is a popular annual running event and fundraiser. Photo by PLTam.

There's no shortage of gatherings around the city where you can put your running form to test all year-round. Yes, even during winter.

During springtime you'll see events like Sporting Life 10K, one of the biggest running events in the city, taking over Yonge Street every May. There's also the TO Women's Run in Sunnybrook Park and of course, Toronto Waterfront 10K.

Those who dare to run in the heat can look forward to events like the Toronto Carnival Run in July, the Pride and Remembrance run around Queen's Park in June, or when it cools down a bit, Terry Fox Run in mid-September.

Some of the best running weather is in fall, which is when you'll get the bulk of events like Oasis ZooRun at the Toronto Zoo, The Canadian Cancer Society CIBC Run For the Cure and the Waterfront Marathon, just to name a few.

MEC holds a run every season of the year, including the wintry ones, which is when you'll also get to experience the Toronto Resolution Run, which has been going for over 30 years. 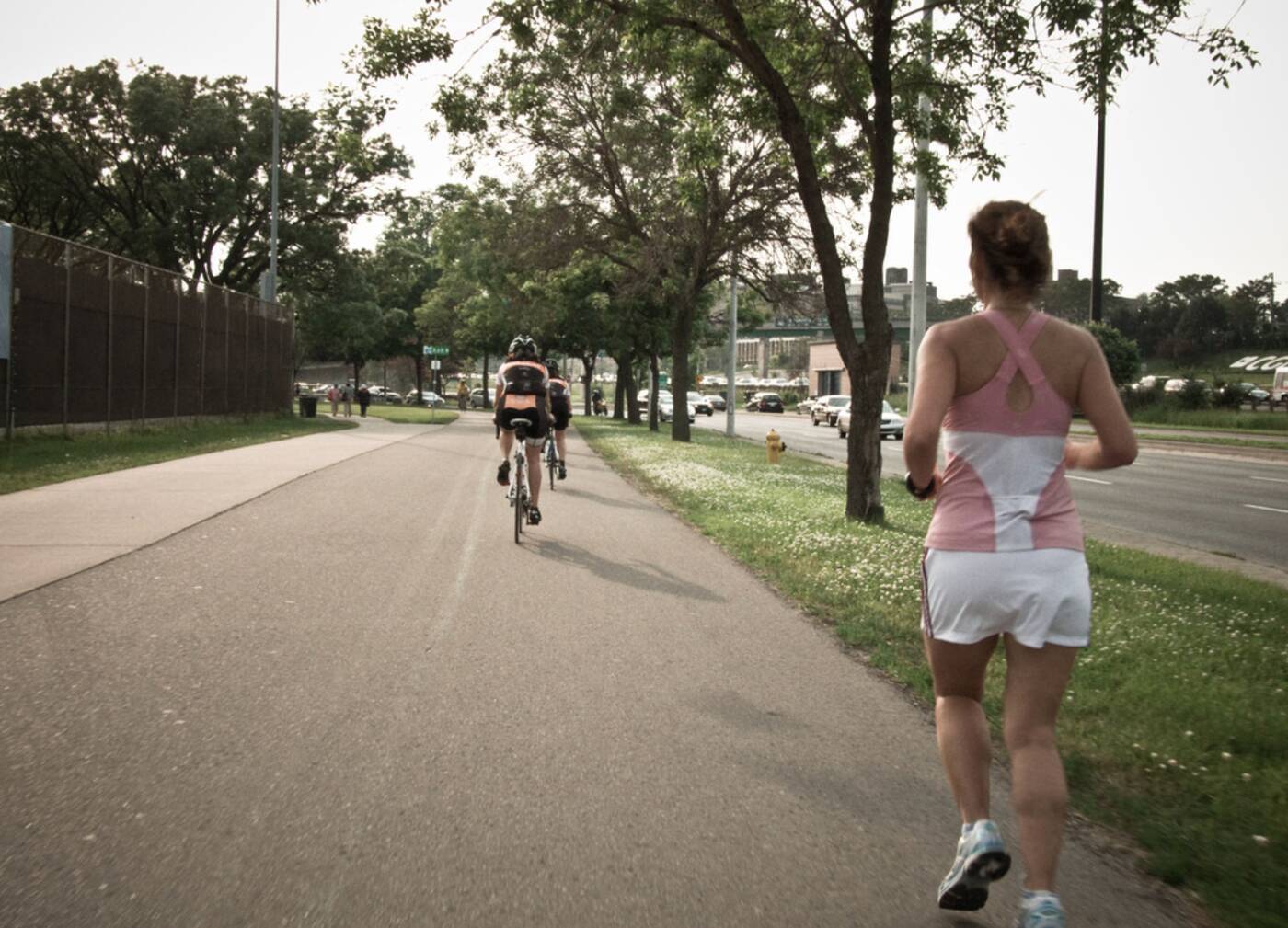 The Martin Goodman Trail comes with views of the lake. Photo by Andy Carroll.

If you're not the type to run solo, joining a group is a great way to keep motivated and share endorphins with some new friends.

We've got more than few running clubs in the city, including some operated by some of your favourite fitness brands like Lululemon, Nike, and the Running Room.

Depending on where you live, you might want to join some neighbourhood groups like the Parkdale Road Runners, who meet at Capital Espresso every week, all year, or the Toronto Beaches Runners Club on the east side.

The majority of these are free, but there are a few which require a yearly membership like the Toronto Running Club, Frontrunners Toronto, or the Longboat Roadrunners for more advanced joggers. 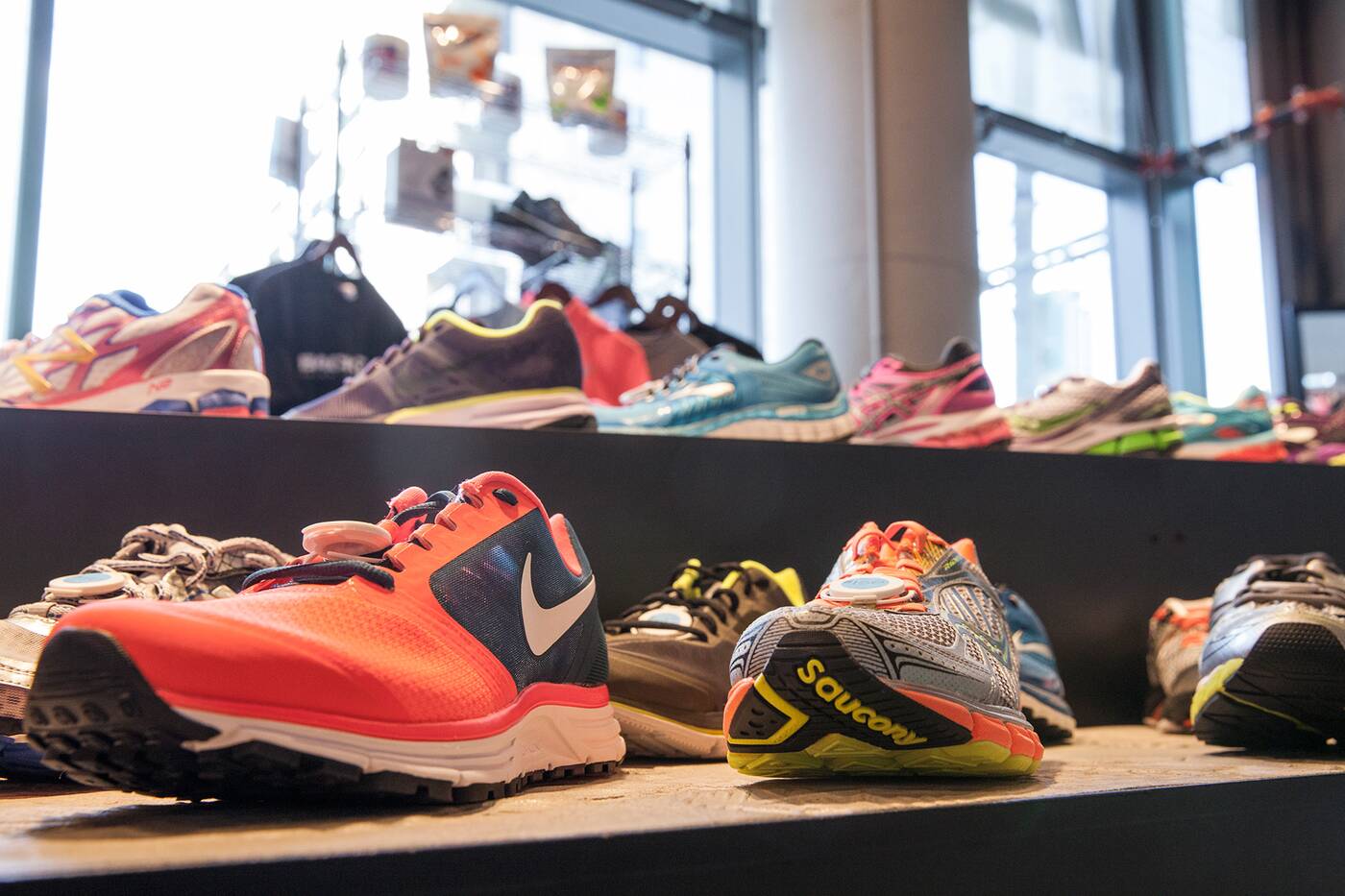 Black Toe Running is a popular store near King and Bathurst for running shoes and gear. Photo by James C. Lee.

Get your fitness outfit looking right (and feeling comfy) with the city's top running shoe stores.

You can't go wrong by hitting up the Running Room, regardless if you're a beginner or a seasoned vet. There's also more obvious mall favourites names like Sport Chek and the Nike Running Loft, or the massive stores of MEC.

For those looking for something specific, specialty shops like Enduro Sport in Leaside, Black Toe Running on King West, and the Runners Shop carry more serious footwear and clothing for optimal performance. 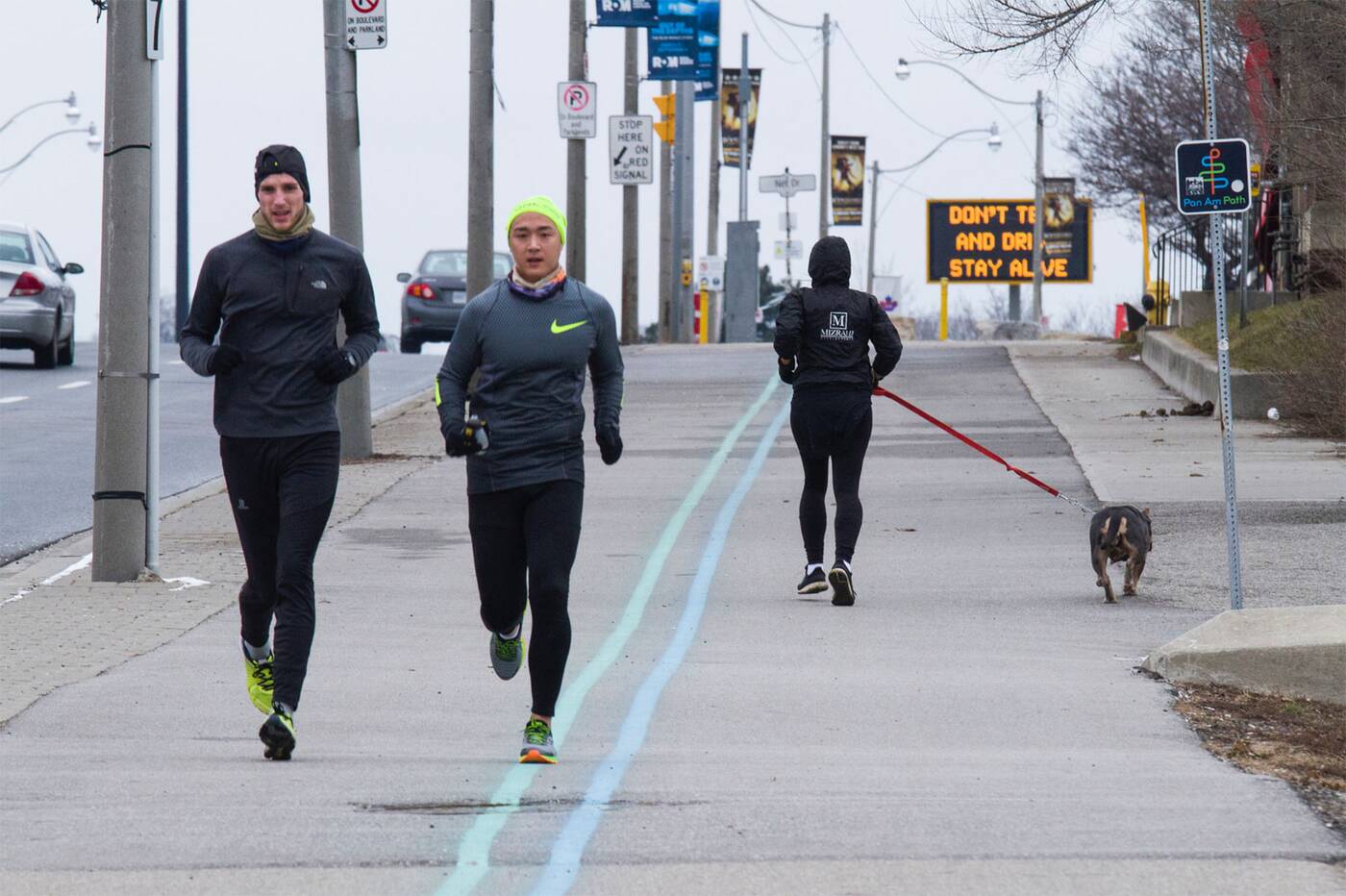 Running is an all-season sport in Toronto. Photo by Jeremy Gilbert.

No matter how much you stretch or stay hydrated, there's always a chance you might incur some type of injury on the road. There's a few clinics in Toronto that specialize specifically in running-specific aches, pains, and sprains, so that you can get back on your feet in due time.

If you're looking to start running seriously, it's important to get some professional medical advice every now and then to minimize the wear and tear, and ensuring you're in tip top condition for the long haul.

Running is a great way to feel better and work on your health, and can be very inexpensive. Make sure you're prepared before starting on that morning jog or training for a marathon in the city.