The Beltline is Toronto's popular trail on an old railway line

The Beltline Trail is a nine-kilometre path where walkers, joggers, and bikers can traverse the city from west to east, weaving in and out of neighbourhoods along midtown Toronto.

Established in 1989, the trail is built on what used to be the Toronto Belt Line Railway — a commuter line that opened in the 1890s to service residents of suburbia but failed to turn a profit, ultimately closing just two years later. 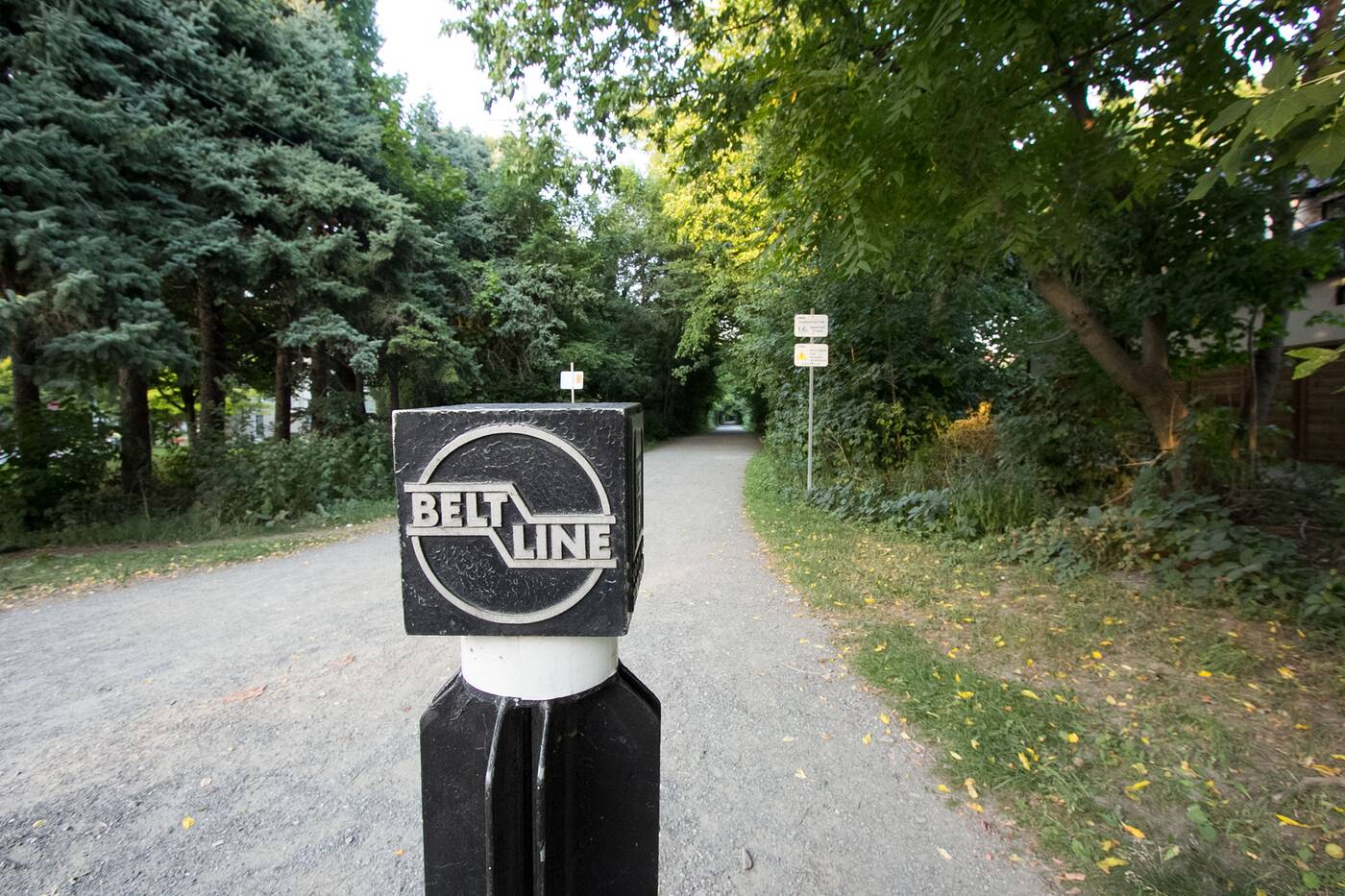 The Beltline Trail is nine-kilometre walking and bike path on old railway grounds.

The Beltline today is the decades-long result of land purchased by the city from CN and track removal along the old rail space. Using paths that are nearly exclusively car-free, the trail now runs just west of Caledonia all the way east to Bayview, then south, ending near Bloor. 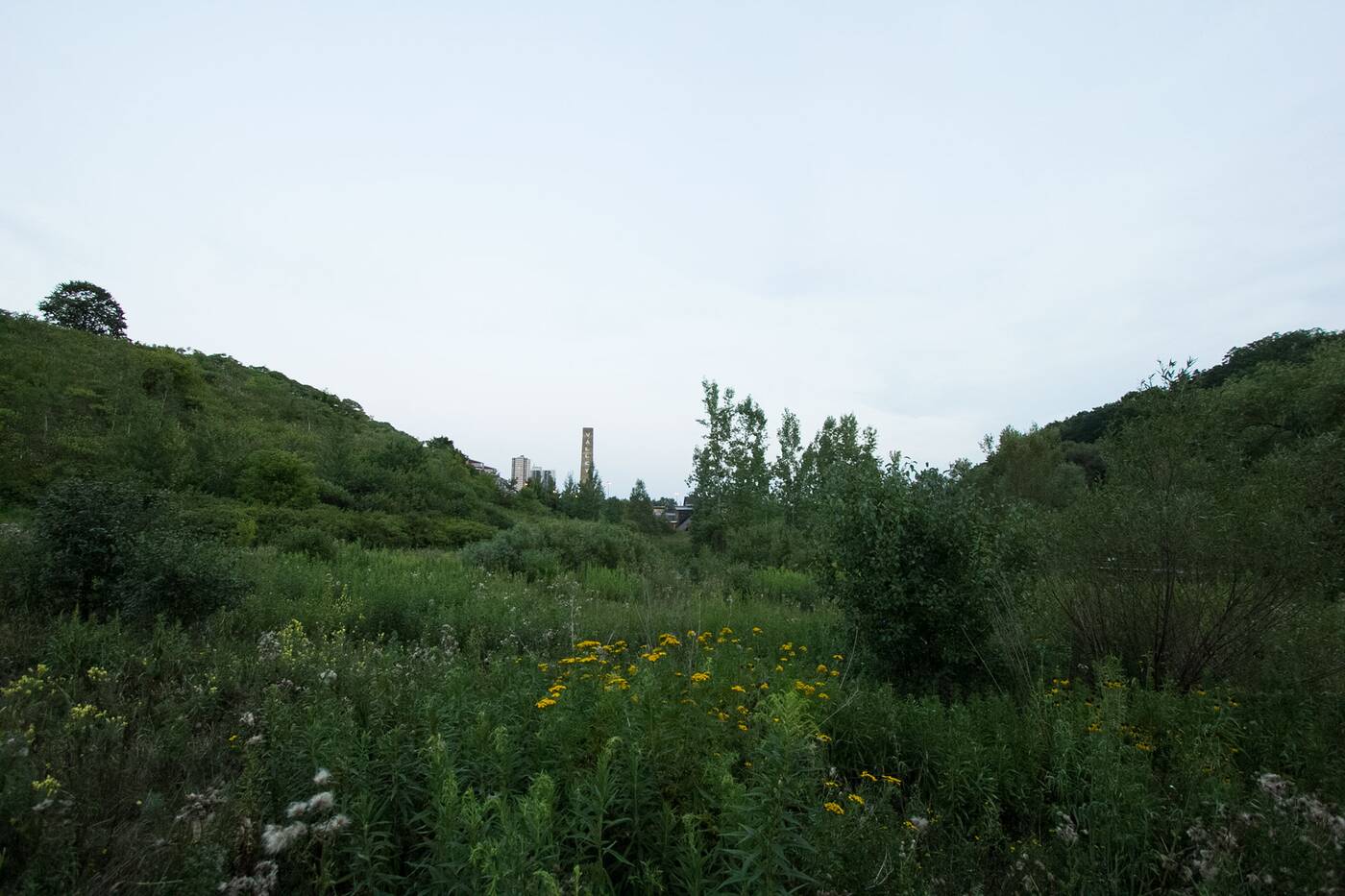 You can take an offshoot path from the Beltline into the Evergreen Brick Works Park.

Traveling all three sections of the Railpath you'll cross scenic bridges and travel tree-lined paths as they lead you through areas like Rosedale, Forest Hill, Moore Park and detours through Evergreen Brick Works. 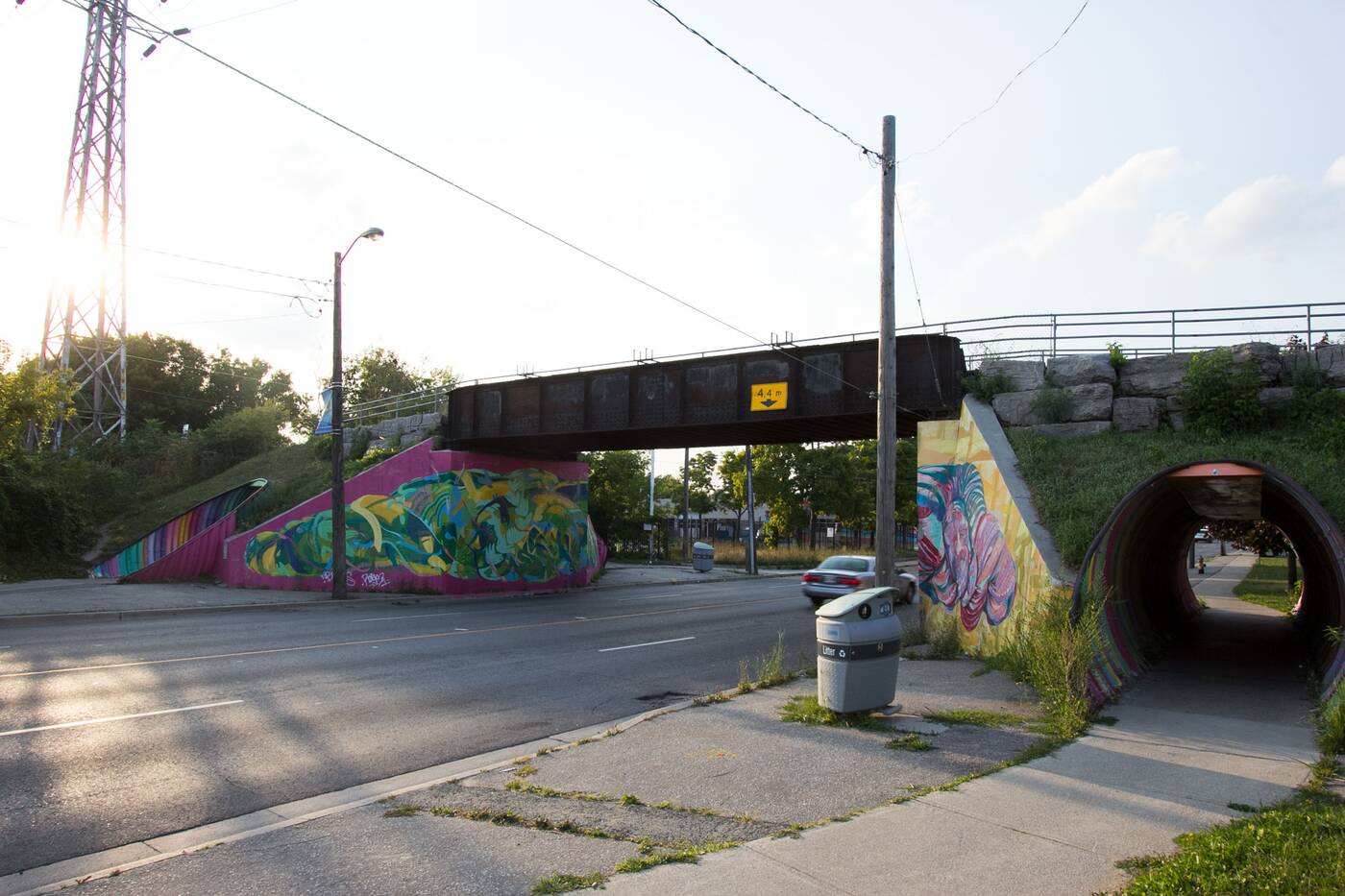 The first section of the Beltline is called the York Beltline Trail.

It's impossible to stay on the Beltline for all nine kilometres uninterrupted, which makes it confusing for some as they attempt to brave the whole trail in one go (if biking, a nonstop trip should about an hour and a half).

Though the first section of the Beltline, the York Beltline Trail, techinically starts near Caledonia off Bowie Avenue by the Castlefield Design District, the trail's most recognizable western entrance lies on Dufferin Street just under the old iron bridge. 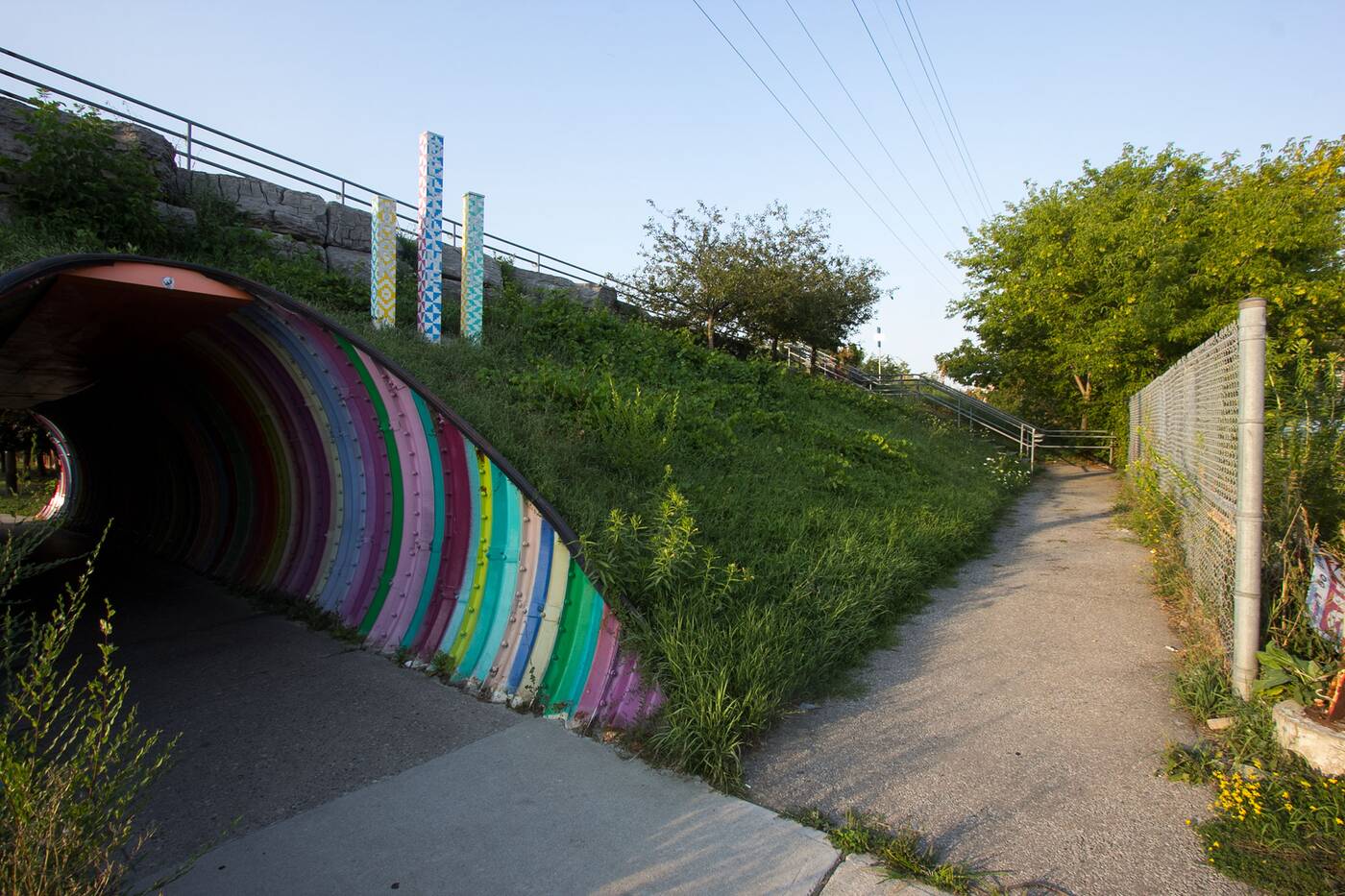 The Dufferin Bridge marks one of the entry points into the York Beltline Trail.

It's easy to spot the colourful tunnels and markers sticking up out of the ground, which were just implemented this year in May. Alternatively, you can find a more accessible entrance through the Walter Saunders Park, through which the Beltline runs. 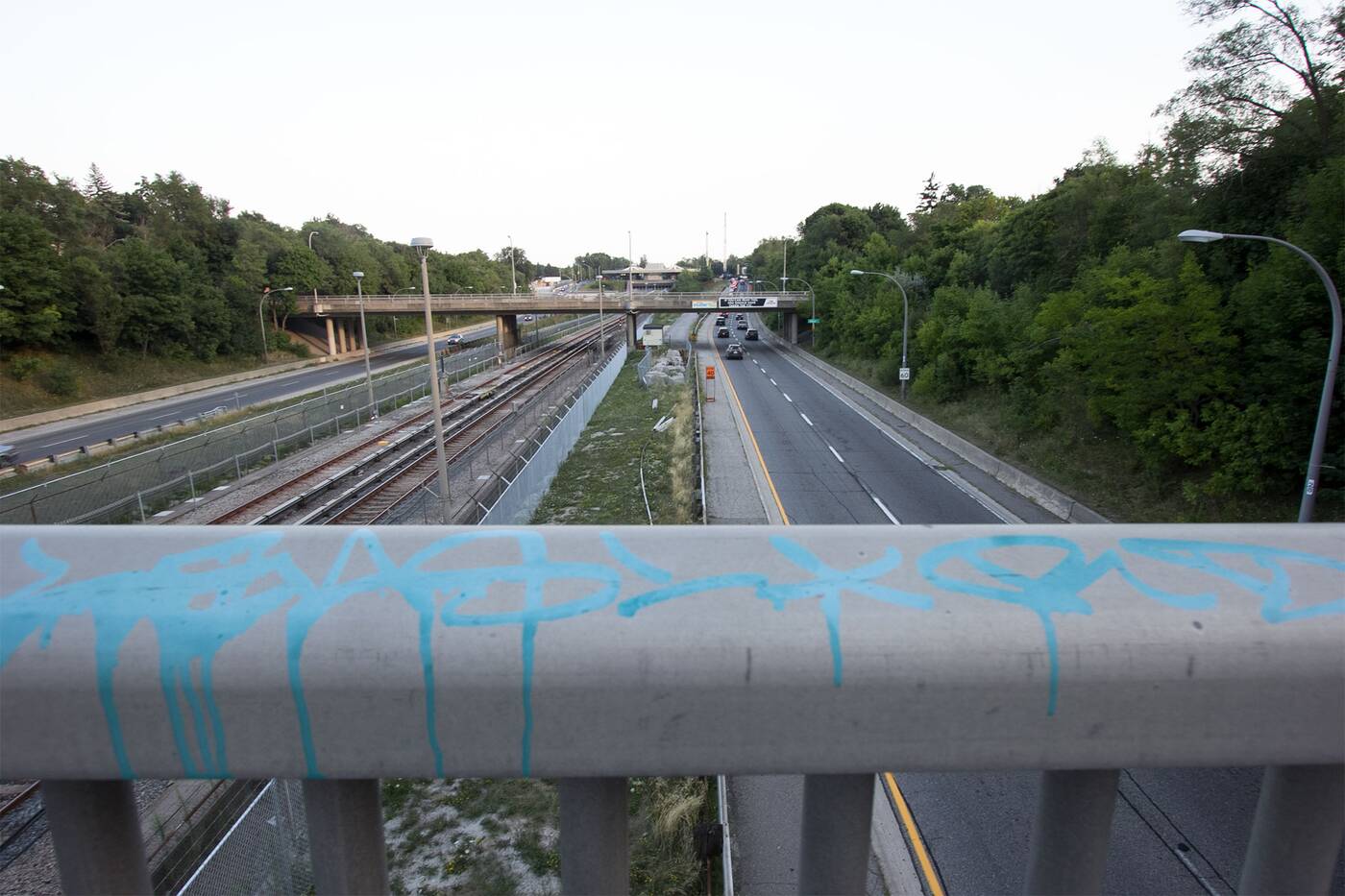 You'll have to cross a bridge over the Allen to get to the second section of the Beltline.

The shortest of all three sections, the entirety of the York Beltline Trail ends after approximately 2.4 kilometres from its starting point, stopping just east of Walter Saunders where it tapers upwards toward Roselawn Avenue.

From here you'll have to go rogue, heading east along Roselawn until it becomes Elm Ridge Drive. Eventually cross the bridge over the Allen to hit the beginning of the trail's second section, the 4.5-kilometre Kay Gardner Beltline Trail. 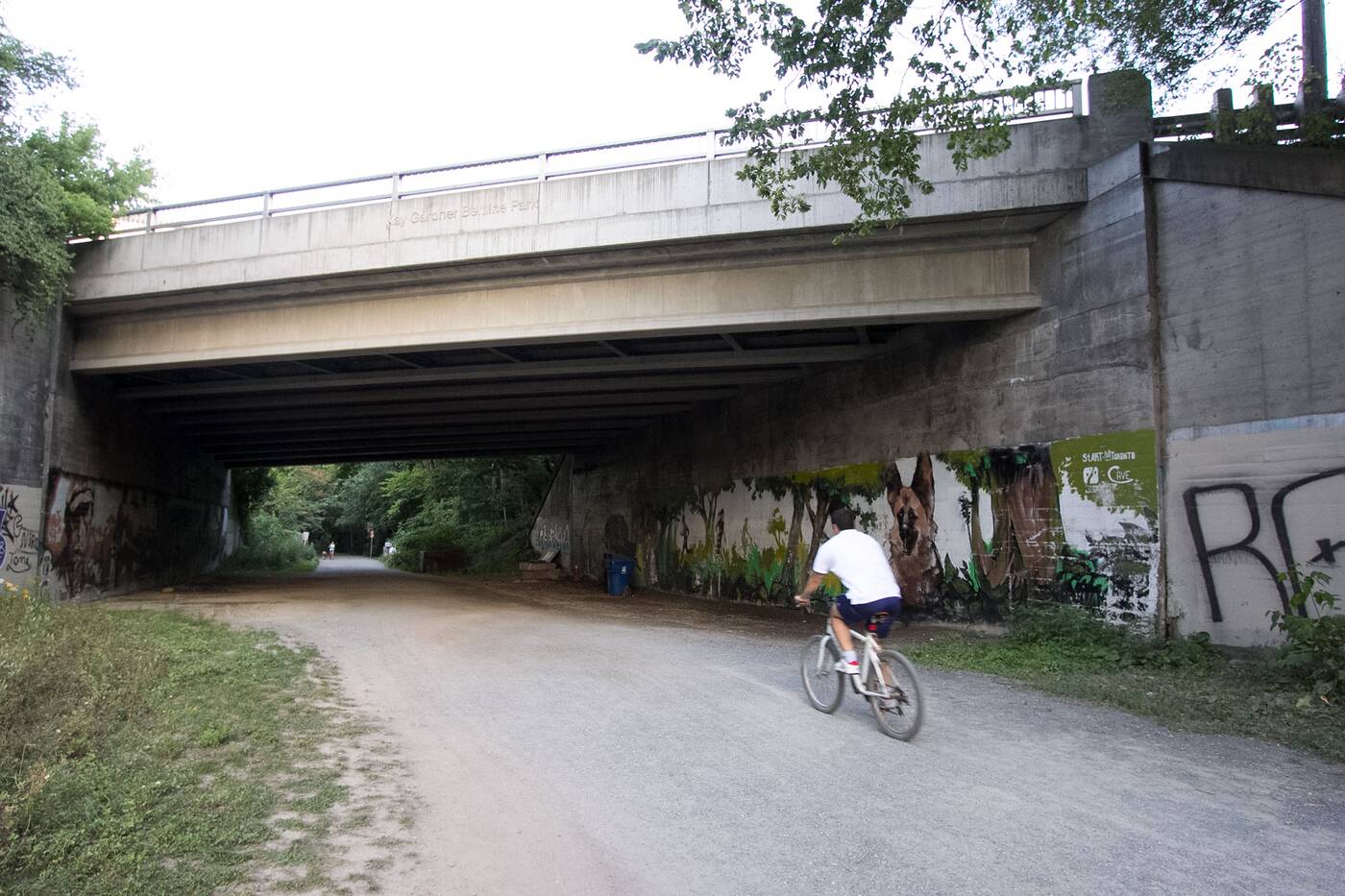 A bridge along the Kay Gardner Beltline Trail features murals courtesy of StreetARToronto.

This stretch is definitely the busiest of the Beltline, with more recreational joggers and bike riders making use of this very green part of the trail as it begins to slope south, parallel to Chaplin Crescent. 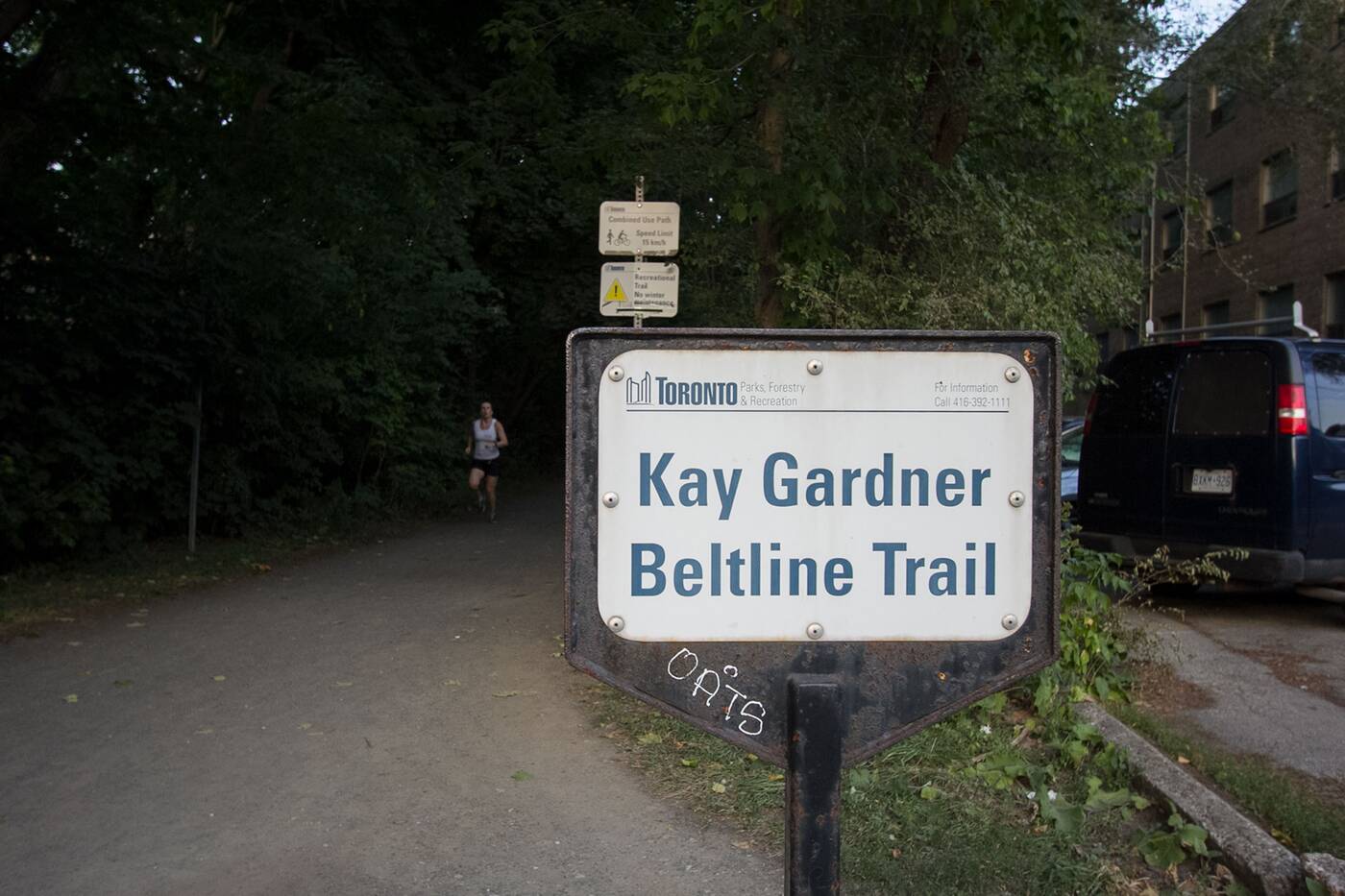 The second leg of the Beltline runs through affluent areas like Forest Hill and Chaplin Estates.

Running through the richer neighbourhoods of Forest Hill and Chaplin Estates, you'll immediately see a difference in the residences which line the paths beyond the trees. 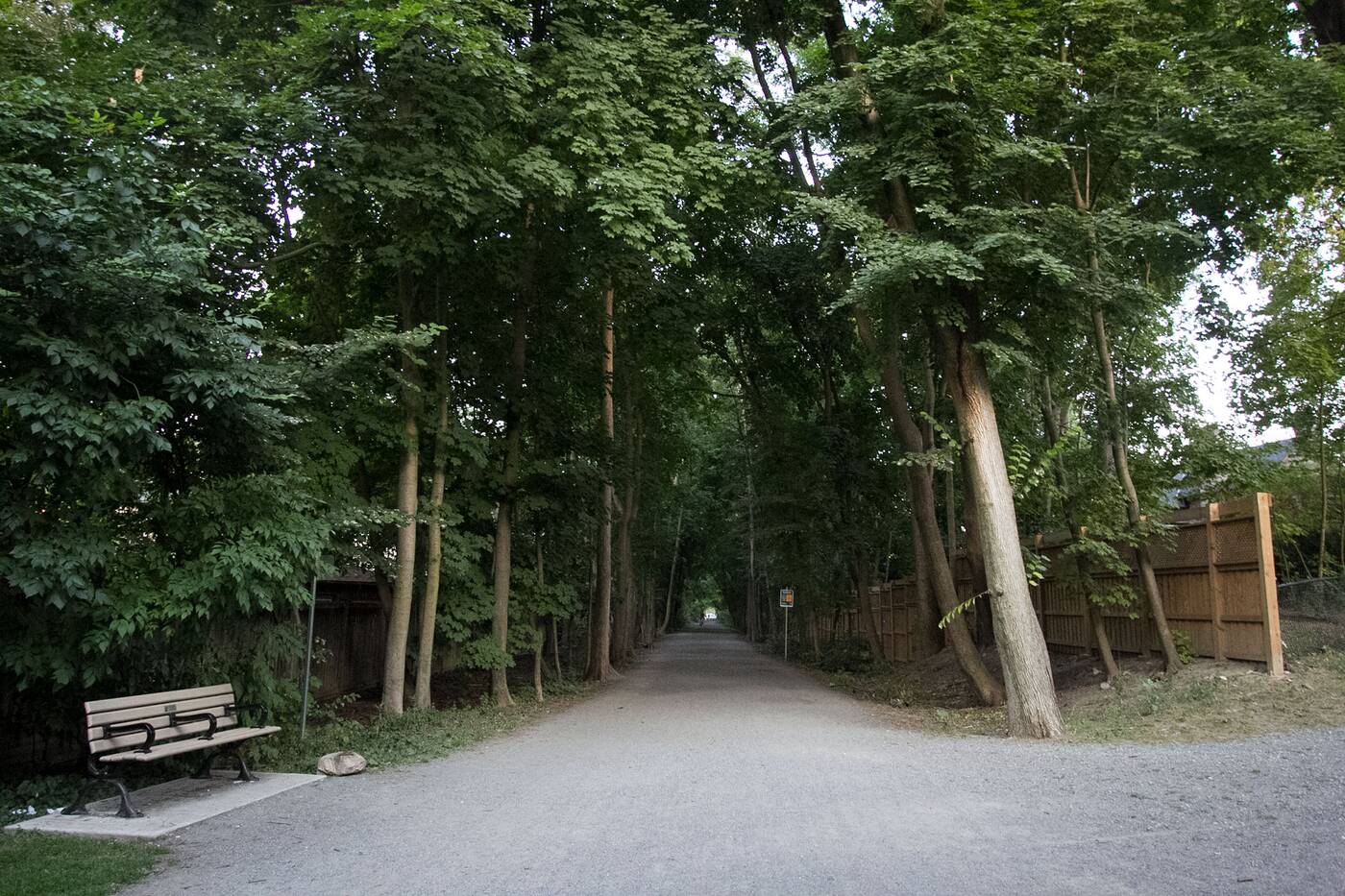 The Kay Gardner is usually busy with joggers and bikers.

You'll probably also notice an influx of dogs and young children along the Kay Gardner, and along this section you'll pass through, or along, several open green spaces like Memorial Park, Larratt Parkette, Forest Hill Road Park and Oriole Park where you can take a rest. 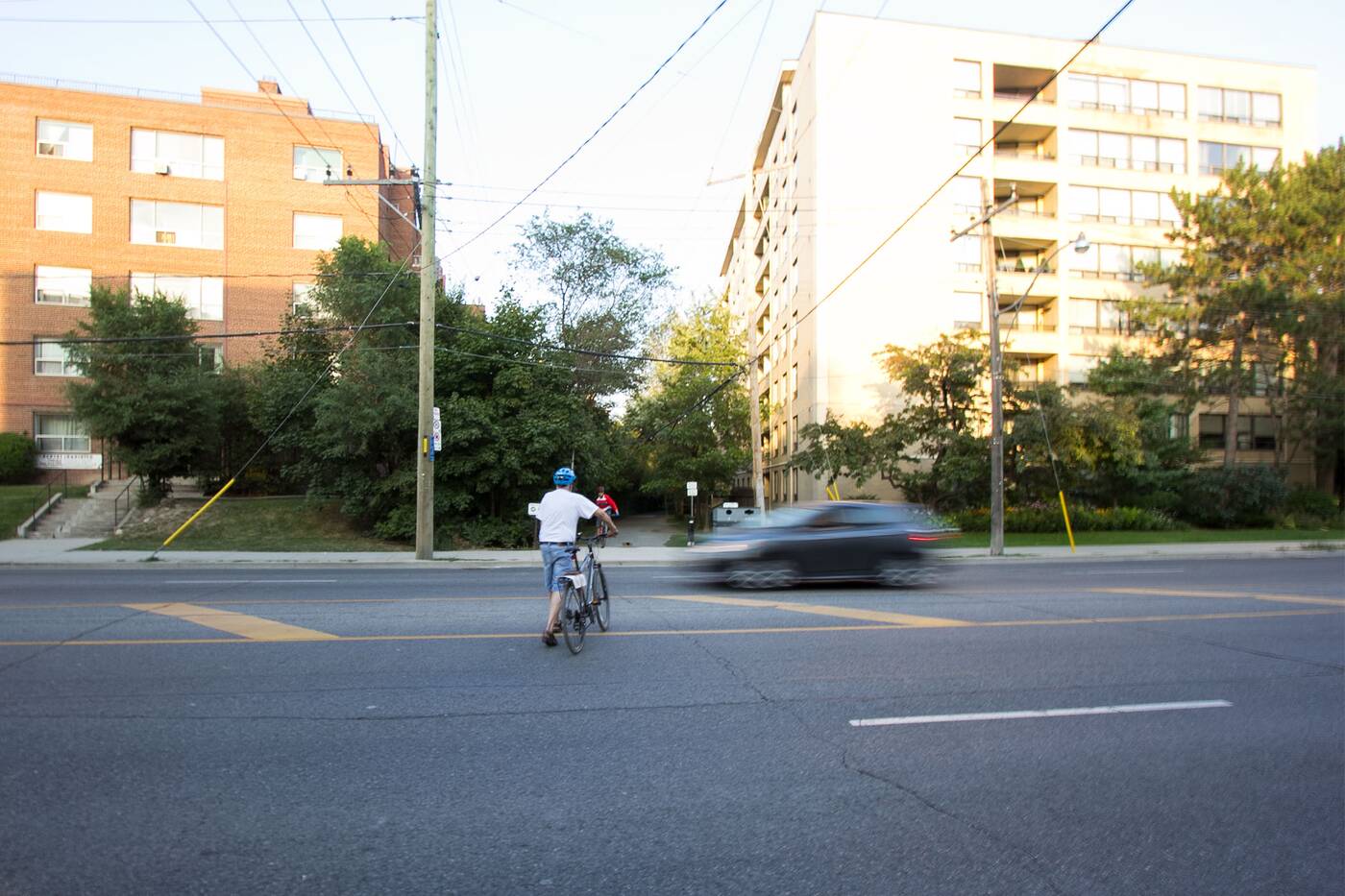 Just be careful when crossing occasional busy intersections like Bathurst, where traffic can be intense and a lack of proper crosswalks require a dangerous bolt across the street. 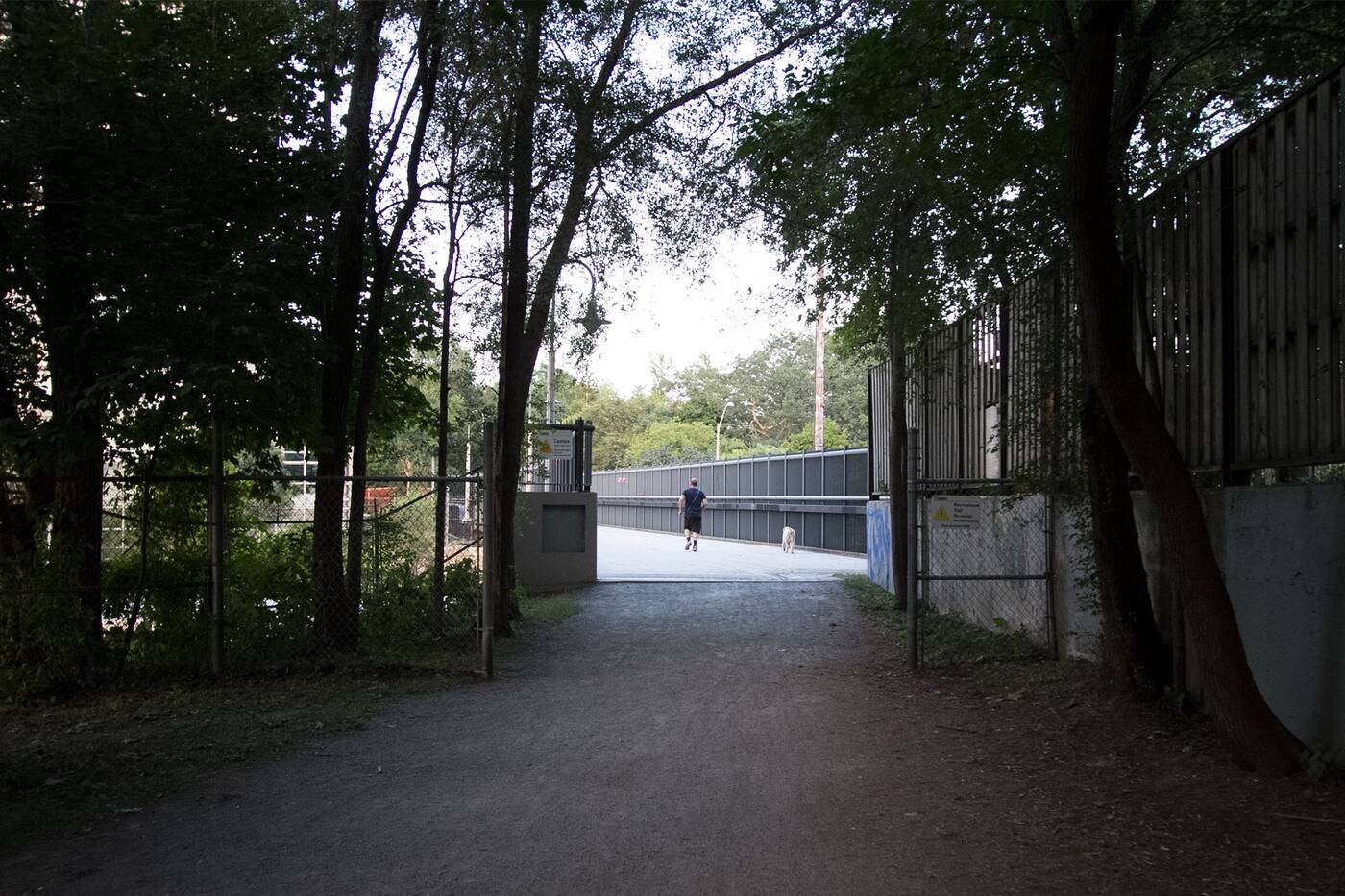 The Kay Gardner crosses over to the east end of the city via the Yonge Street Bridge.

The last third of the Kay Gardner Beltline Trail is marked by the Yonge Street Bridge, which also passes over the Davisville Subway Yard. 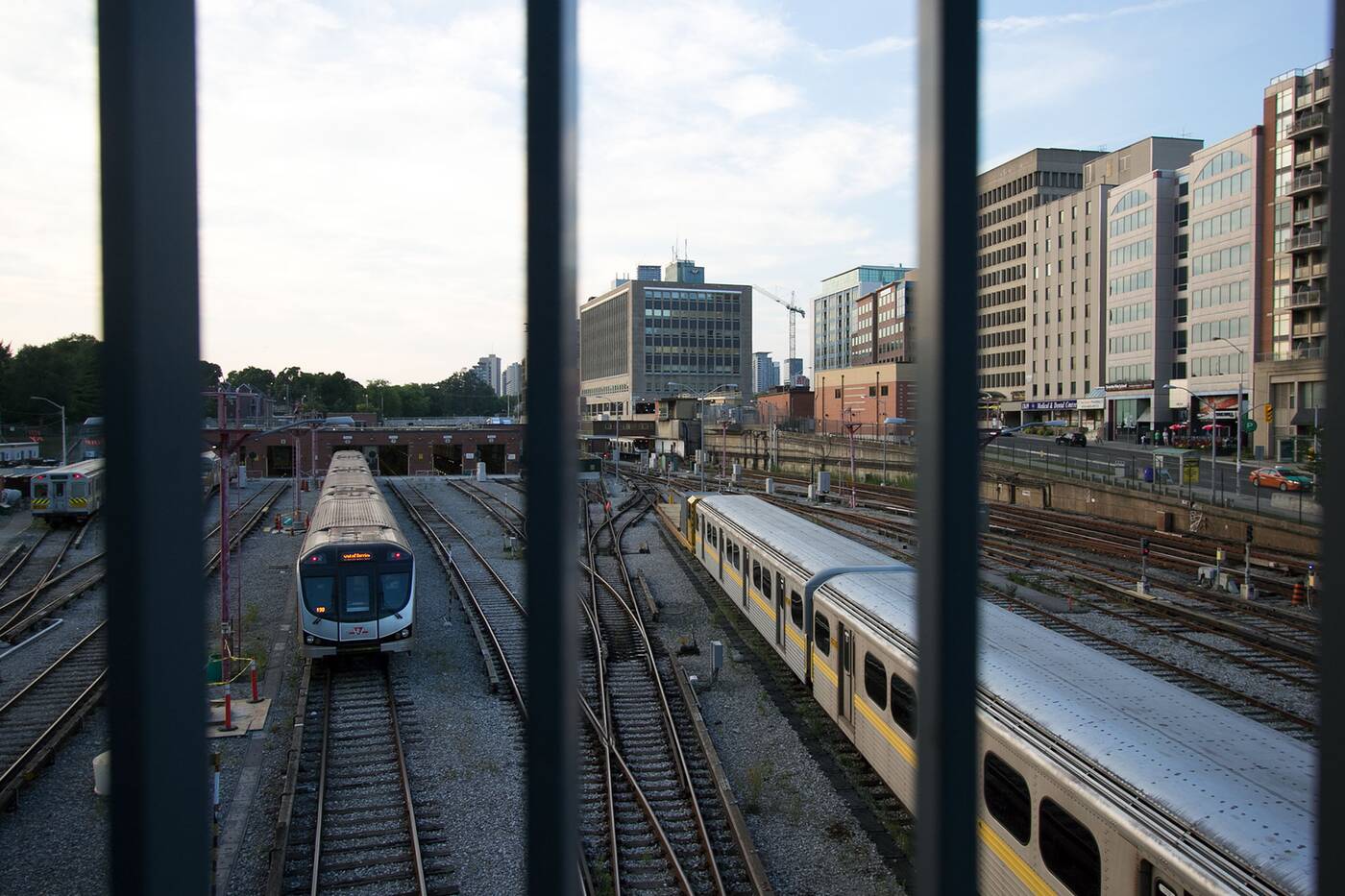 The Yonge Street Bridge crosses over the Davisville Subway Yard.

Refurbished in 1993, this bridge is a favourite spot for photographers looking to practice their shutter speed game, with Line 1 subways racing underway every four minutes or so. 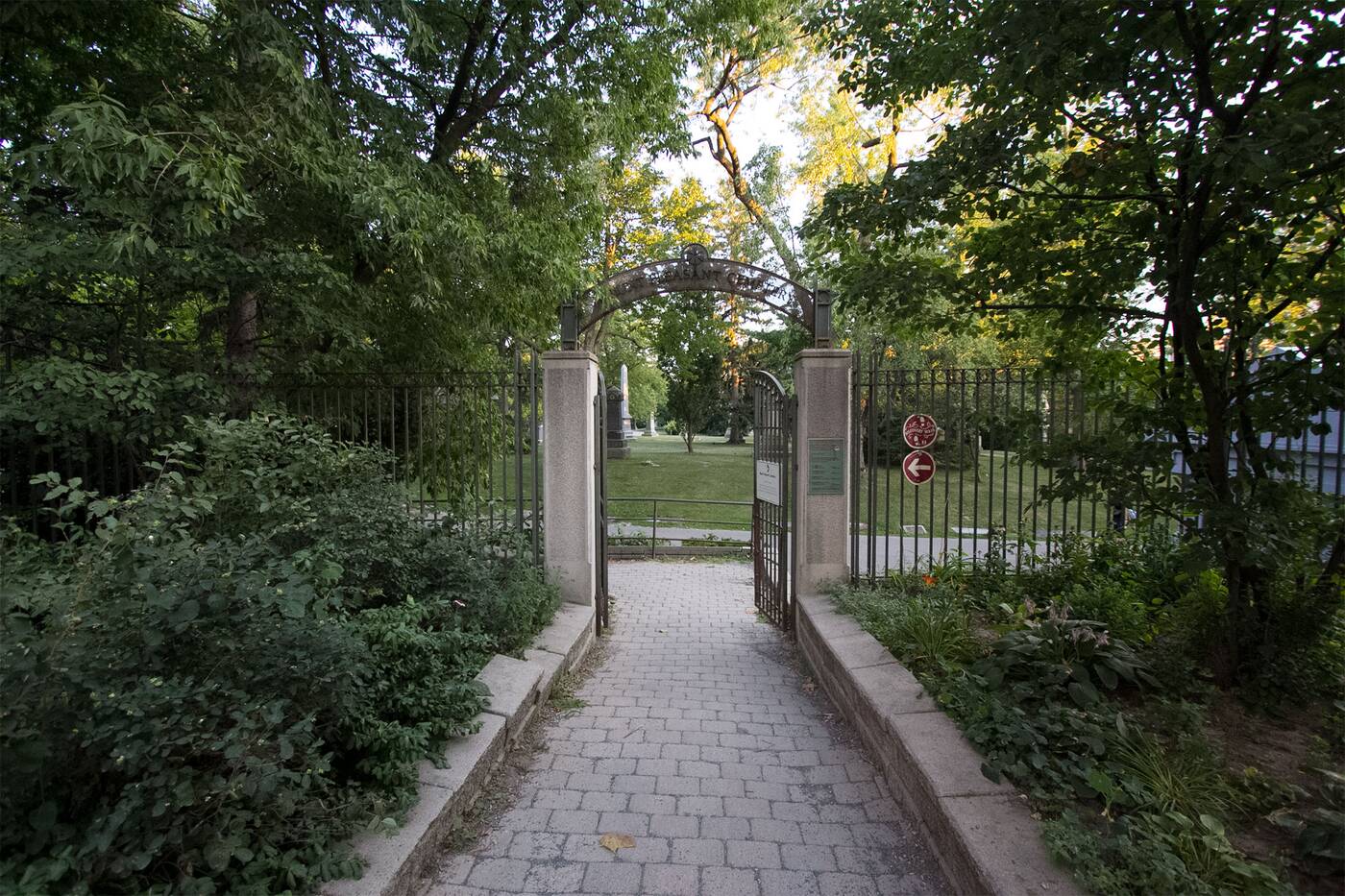 You can take a detour through the Mt. Pleasant Cemetery near the end of the Kay Gardner.

Eventually you'll have the option of continue eastward toward Mount Pleasant, where the Kay Gardner Trail ends, or opt to explore the beautiful grounds of the Mt. Pleasant Cemetery, which is over a century old. 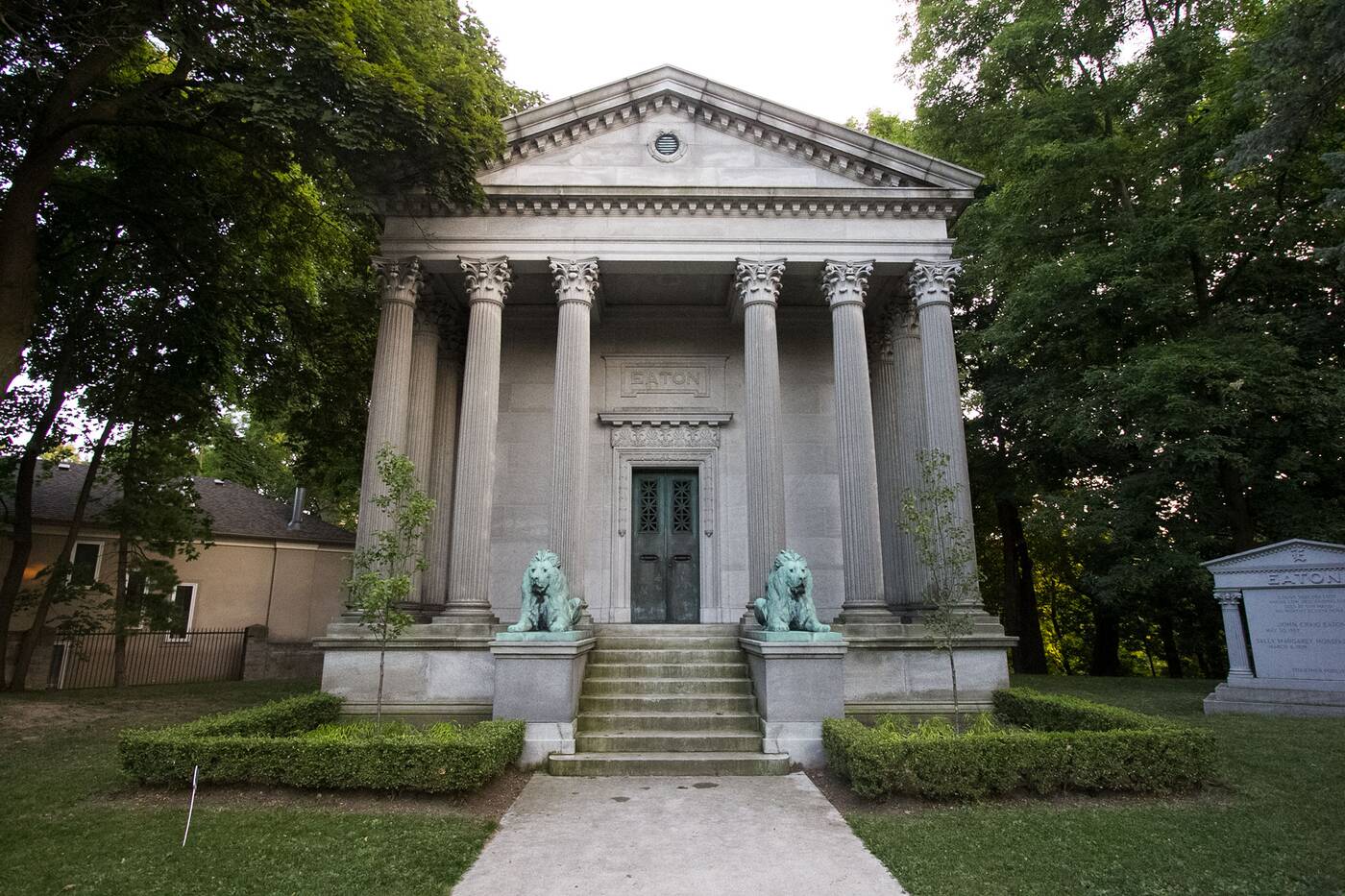 There's an entrance to the third section of the Beltline Trail at the southern end of the cemetery.

Opened in 1876, this National Historic Site of Canada is the perfect place to take a scenic stroll or bike ride along its curving paths lined with mausoleums and tombstones.

Head through the cemetery, across Mt. Pleasant Road to the other side and you'll eventually find the entrance to the final leg of the path, the Ravine Beltline Trail, somewhere next to the Mt. Pleasant Funeral Centre. 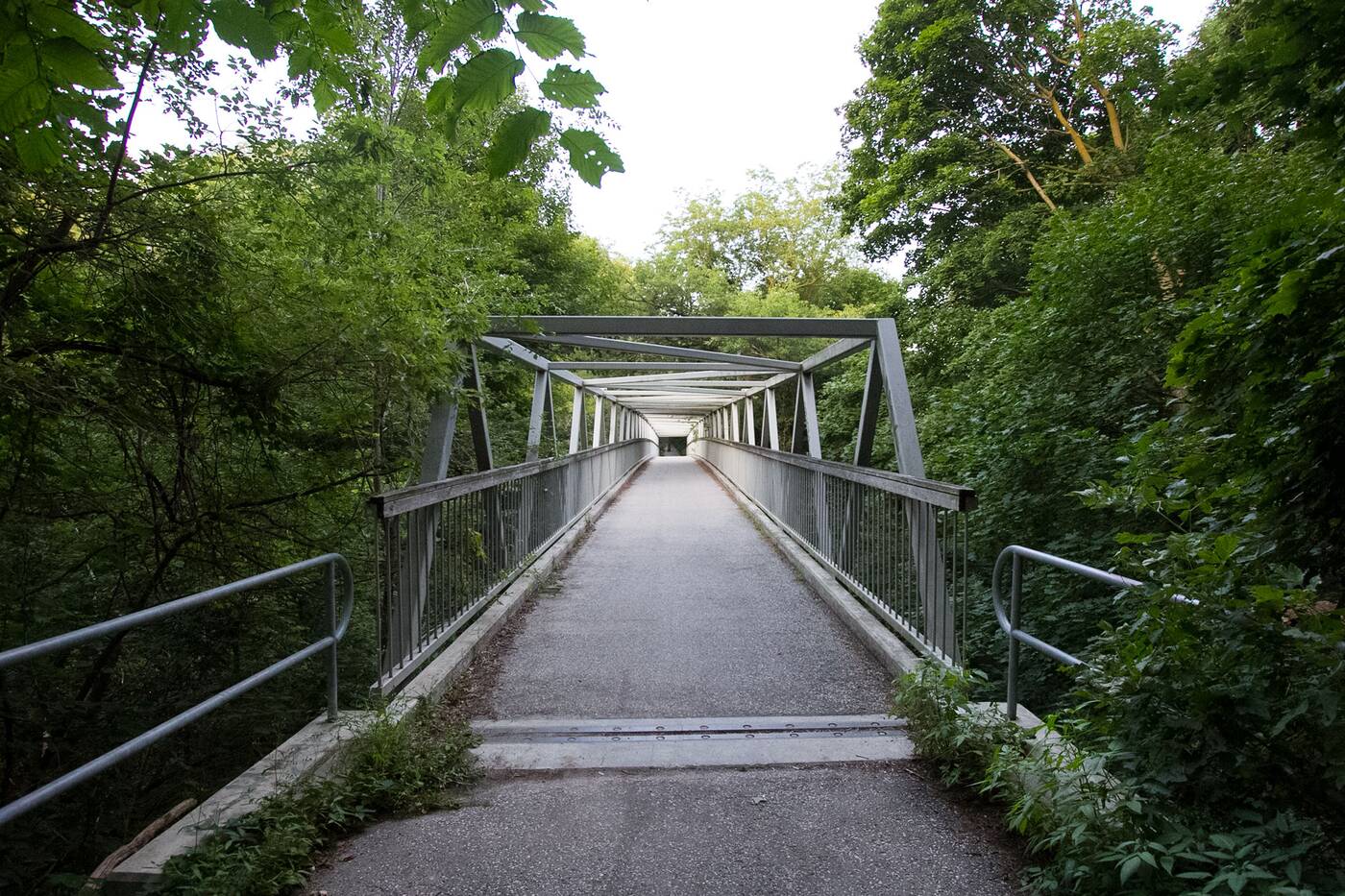 Alternatively, there's another entryway that's worth exploring: a harder-to-find entrance at the residential intersection of Hudson Drive and Heath Street, near Moorevale Park.

Descend into this subtle hole in the brush to cross over the Moore Park Ravine before heading under to continue heading south along the wildest part of the Beltline. 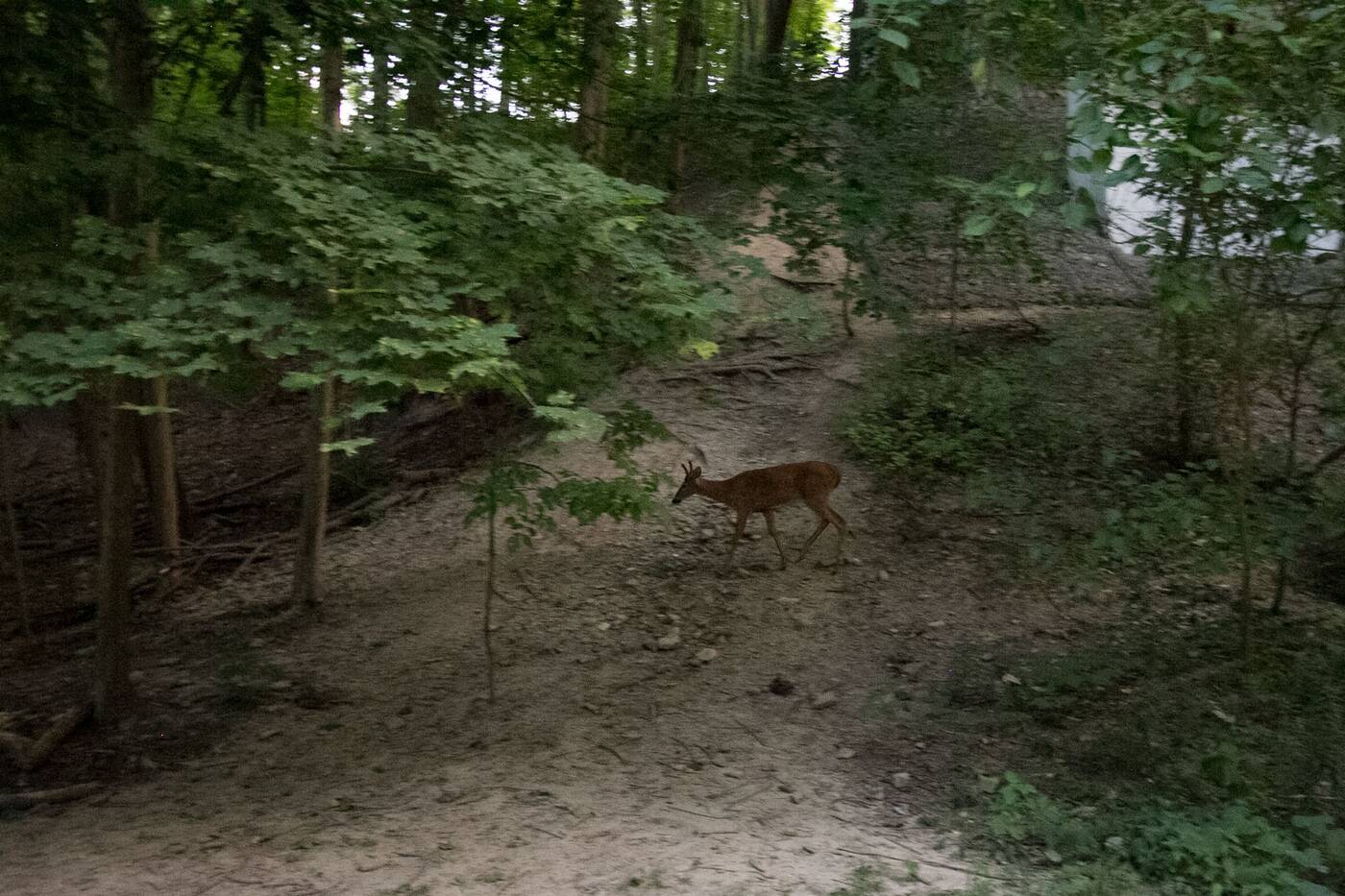 It's common to spot wildlife like deer and small critters in the Ravine Beltline Trail.

Where other parts of the Beltline enforce at 15-kilometre speed maximum, the Ravine Trail offers far more flexibility.

With trees towering on either side of this trail known as Mud Creek, you'll feel totally immersed in nature here. The canopy here is amazing, and it's very likely that you'll see some deer, or at the very least some rabbits and birds. 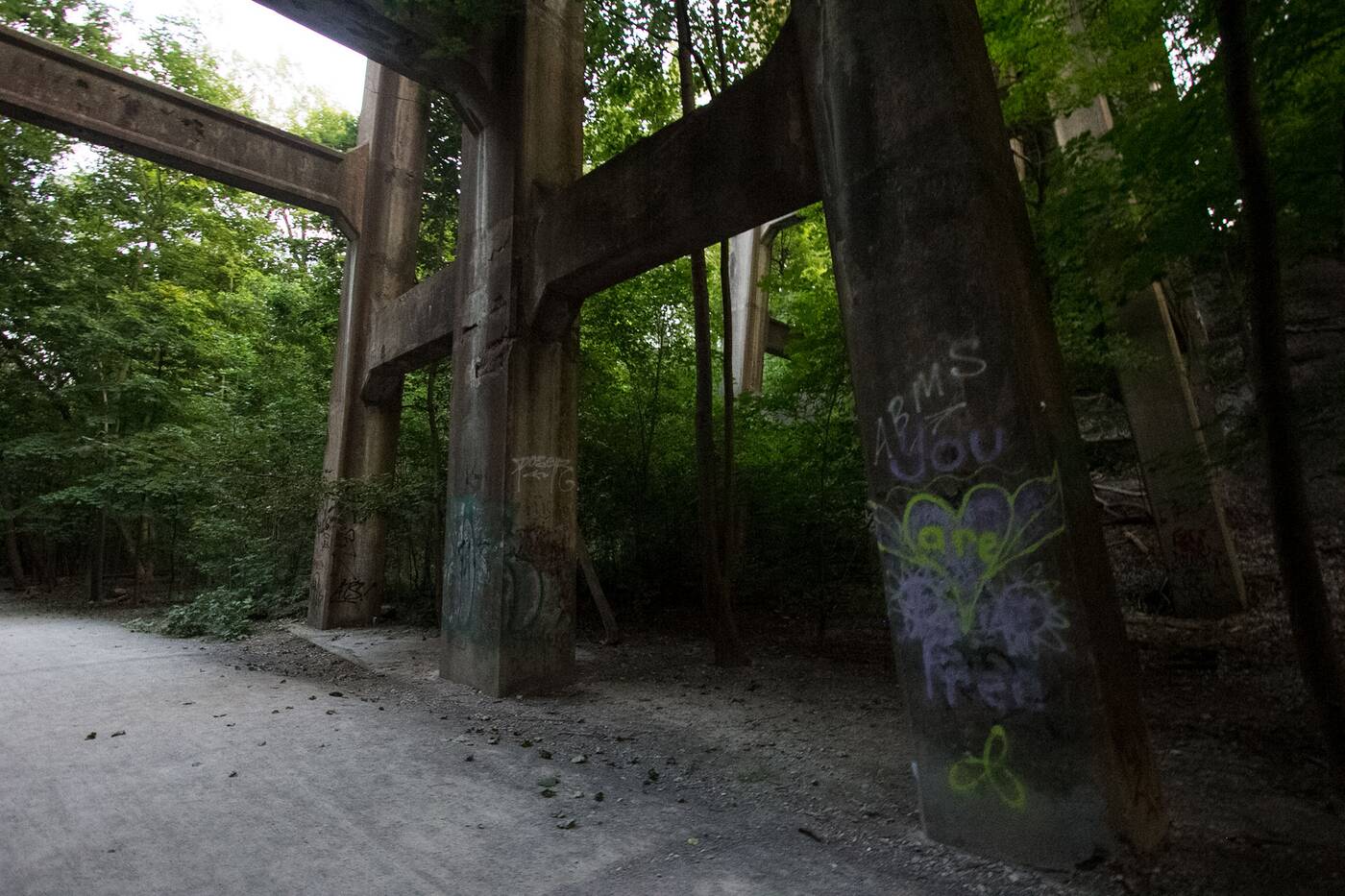 The Governors Road Bridge is a towering structure adorned with graffiti tags and greenery.

Crossing under the impressive Governors Road bridge is always a sight to behold. 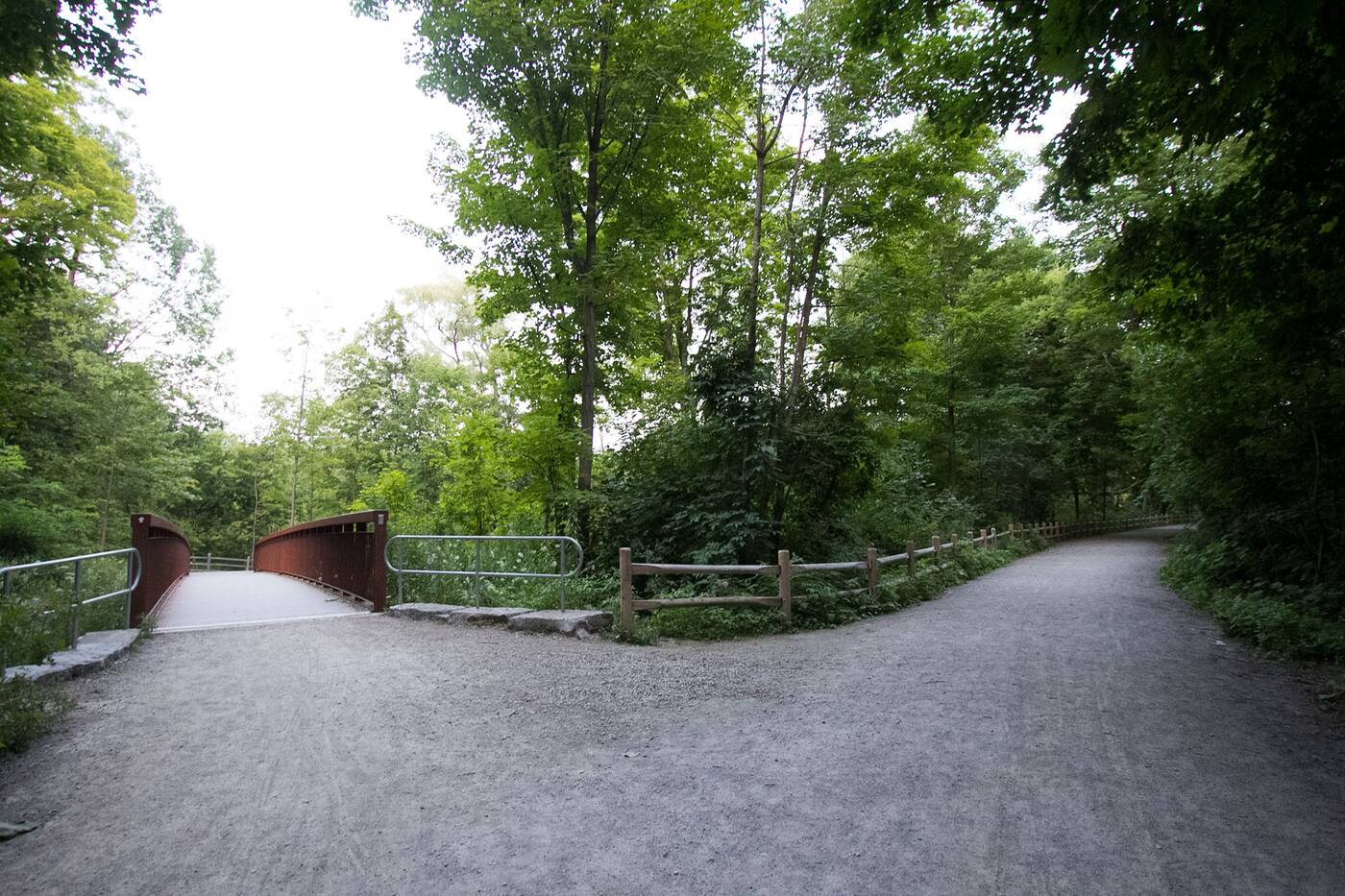 A fork in the road allows travellers to continue on the Beltline or take a detour through Don Valley Brick Works Park.

Soon after, you'll come to the end of the Moore Park Ravine, marked by a fork in the road, with the right path being the Beltline, and the other, a bridge leading through the Don Valley Brick Works Park. 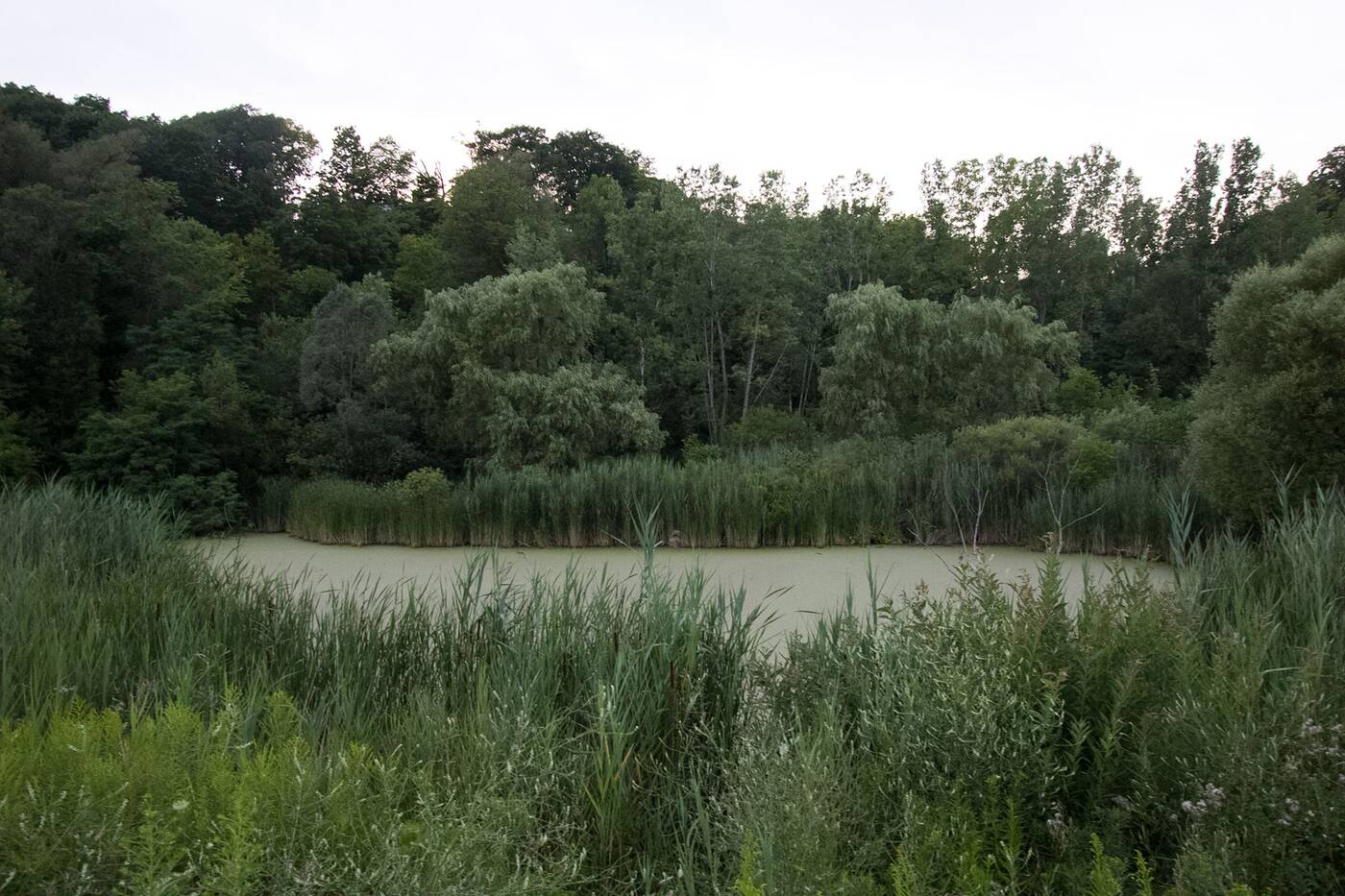 The Don Valley Brickworks Park is a lush piece of land.

If you've never explored the latter, I highly recommend checking it out. The area has been restored completely, consisting of a lush mix of Carolinian trees, wetlands and even a marsh. 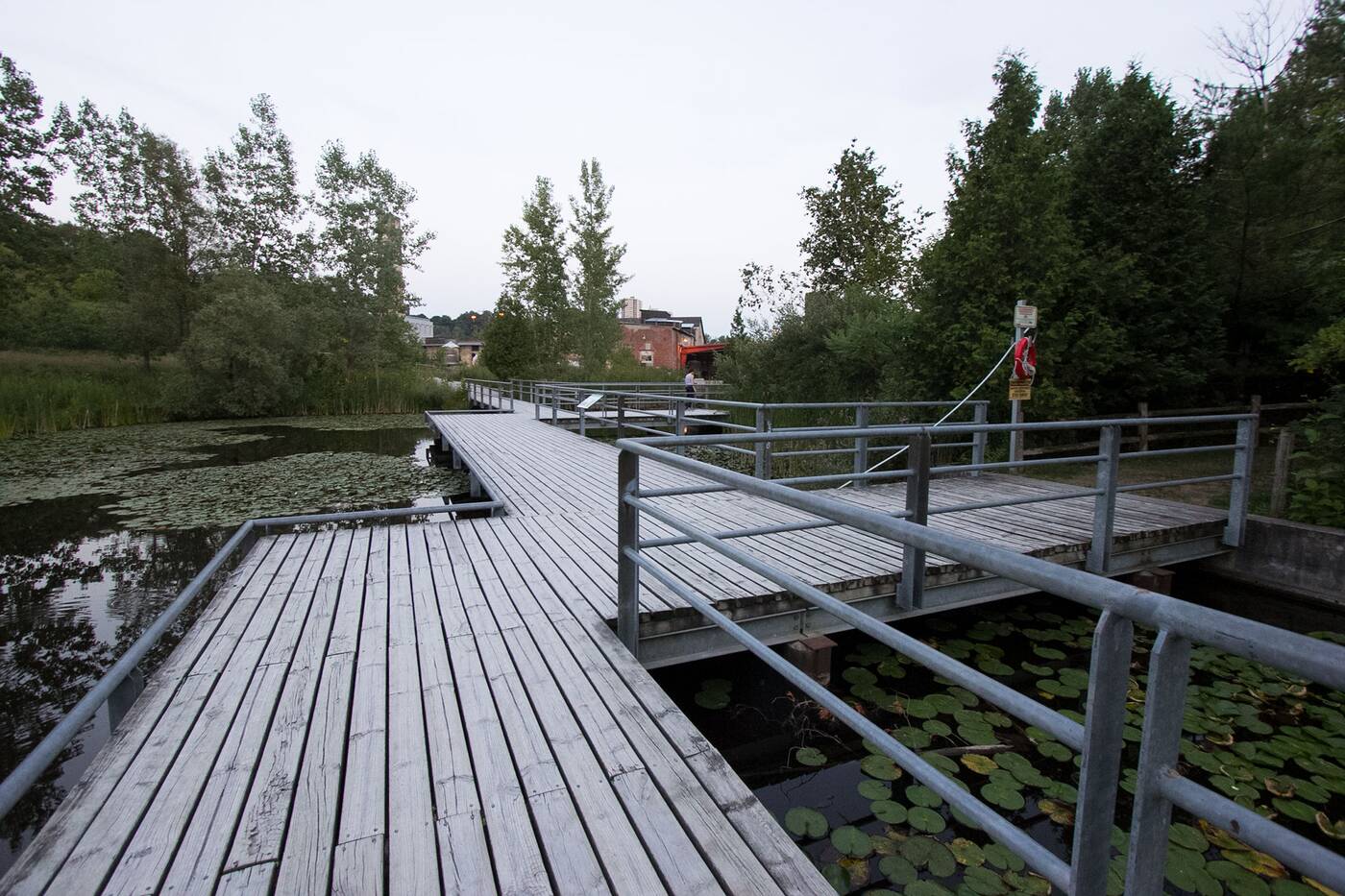 You can continue south past Evergreen Brick Works to finish off the rest of the Beltline Trail.

Beyond the fork, the Beltline Trail continues heading south, parallel to noisy Bayview Avenue in what can be considered the least enjoyable and most industrial part of the trail.

I recommend making your graceful exit at Evergreen Brick Works; otherwise, you can can continue to the official end of the Beltline Trail, where it splits off at another fork, leading to the Park Drive Reservation Lands to the right and Craigleigh Gardens to the left. 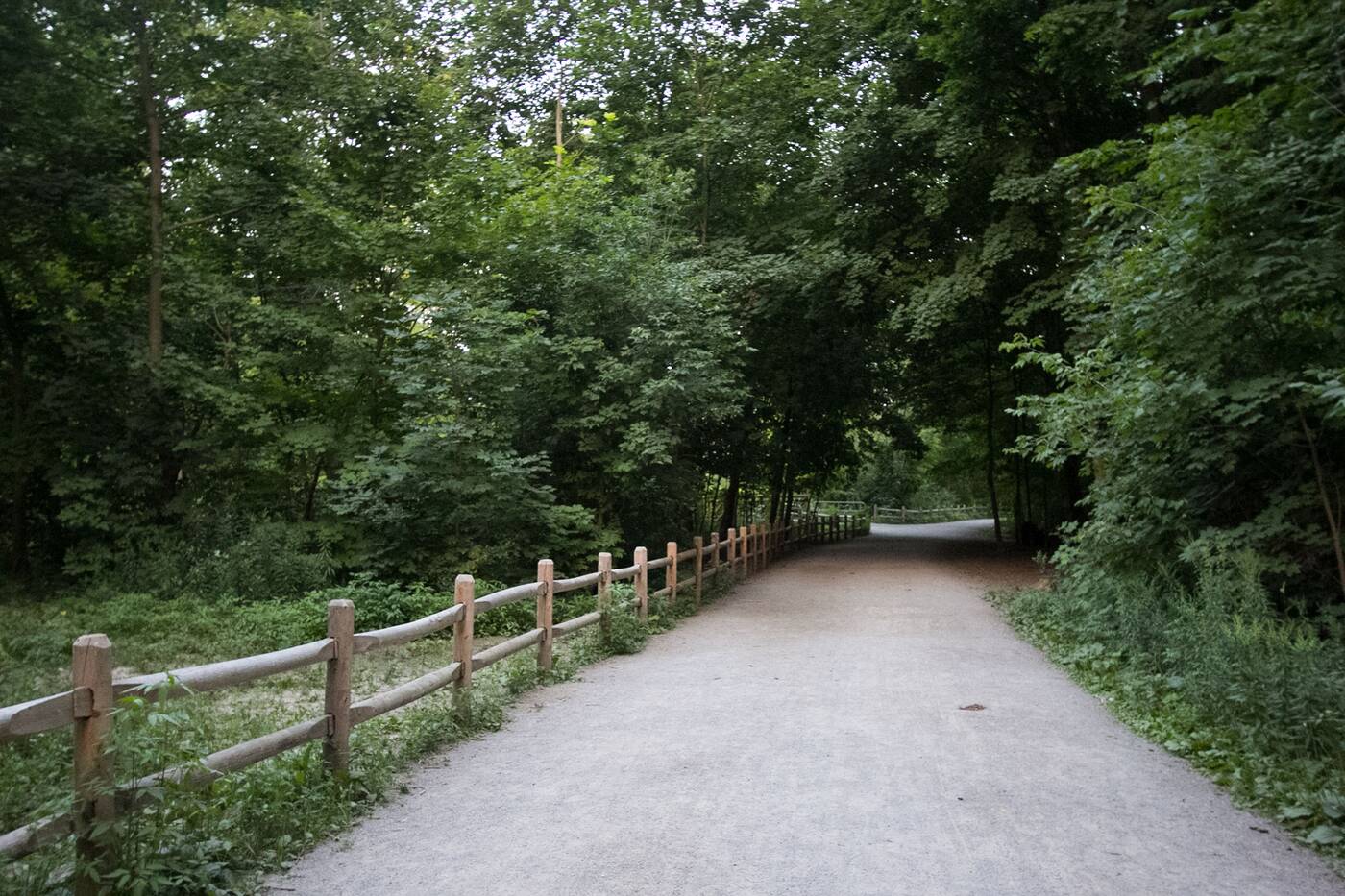