How to spend a day in Bloordale and the Junction Triangle

Bloordale and the Junction Triangle are neighbourhoods that have changed profoundly over the last five years. The latter, for instance, didn't even have a name until 2009 when a competition was held to bestow a moniker on the area nestled between the Junction and Bloordale. Since then, the neighbourhood has experienced a major boom. Sure, there are still empty storefronts along Dupont, but the number of new businesses that have opened is at times staggering.

Bloordale has also experienced its own surge, particularly as pertains to restaurants, which have graced the neighbourhood in droves. That said, it'd be a mistake to characterize the rise of both of these neighbourhoods as solely food-oriented. As Toronto art galleries have migrated away from West Queen West, there's a burgeoning scene in and around Sterling Road, and the stretch along Dupont between Lansdowne and Dundas is home to a number of quirky shops that are as interesting as the city has to offer.

Here's how I'd spend a day in Bloordale and the Junction Triangle, from morning to late at night.

Neither of these neighbourhoods could be accused of being brunch capitals of Toronto, but with the surge of restaurants come a healthy dose of options for your morning meal. For weekend eats, I'd head to the the Whippoorwill for excellent eggs Benedict and one of the city's better Caesars. If I was looking to indulge my sweet tooth, I'd mosey over to Starving Artist for its waffle-focused offerings. Or, I f was feeling a bit more adventurous, I'd snag a table at the Farmhouse Tavern. 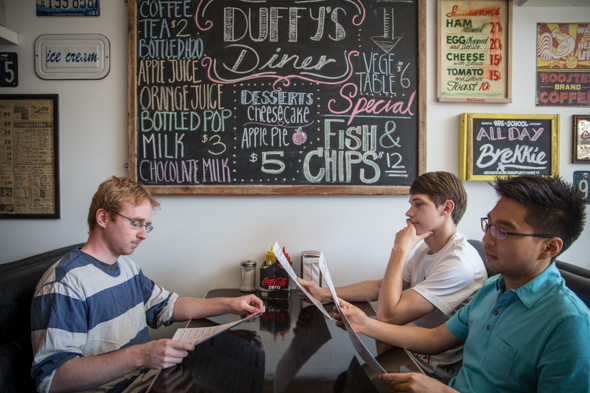 When I want to do the diner thing, I love Wallace & Co. and Duffy's Diner. If I'm eating with vegetarian friends, Hello Darling is far and away my favourite neighbourhood spot to take them.

Both neighbourhoods have coffee shops that are fixtures in my weekend routine. Cafe Con Leche is an underrated gem near Dupont and Symington, complete with Nutella lattes. The Intergalactic Travel Authority is a hit with the kids, though I try to get to Propeller Coffee as often as I can to buy beans and snag a quick shot. I'm also a fan of Wallace Espresso. If there's work on my plate, I like to settle in at the homey Holy Oak Cafe. 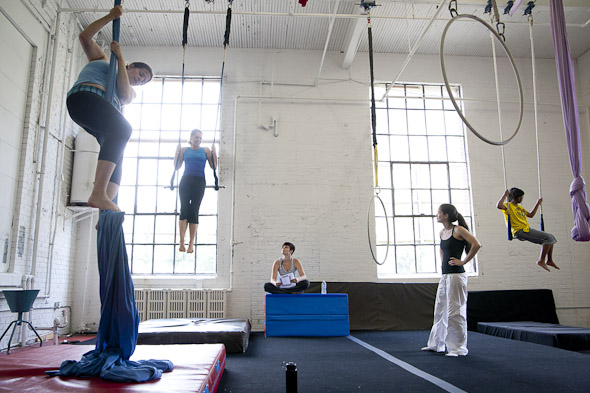 With a full stomach and some caffeine in my system, I might hit up go for an easy ride down The West Toronto Railpath. If the weather's good, I might hit up the Campbell Avenue Park for softball, soccer and general running around. Depending how playful a mood I'm in, I might contemplate joining the circus or doing some hardcore crossfit training.

Lunch is a casual affair in Bloordale and the Junction Triangle. Brock Sandwich is one of my absolute favourites, while Clara's Gourmet Burgers is an underrated player in the city's burger wars. I head to Charmaine's Place if I'm seeking the comfort of a home-cooked meal, while a visit to Foodbenders always makes me feel just a bit healthier, which I don't mind one bit.

There are two things these neighbourhoods do particularly well: vintage shops and art galleries. That's not really surprising in that both of these businesses tend to be signs of recent gentrification, which doesn't need to be the bad word it's so often understood to be. 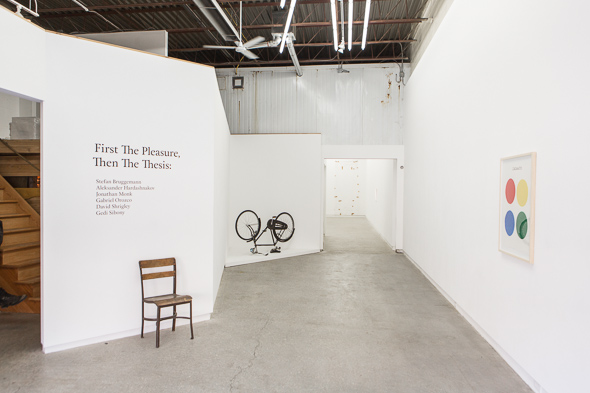 As someone who lives in the area, I'm ecstatic to see the burgeoning gallery scene in the former industrial area around Sterling Road. Clint Roenisch just relocated to a new warehouse space on St. Helens, joining Daniel Faria, Scrap Metal Gallery, and Arsenal Toronto. I also like to pay regular visits to Mercer Union, Katzman Contemporary and Jessica Bradley Annex.

For vintage clothing, Odd Finds General Store is my top pick, which also sells high quality tea. There's also the Kind Exchange and Ransack the Universe and the Vintage Depot.

Perhaps the best part of shopping in these neighbourhoods, however, is the quirky one-off stores. For Euro-bike accessories I drop by La Carrera, for paper goods Town is the spot. There's also shops devoted to bee products, get authentic letterpress printing, and puppetry puppets here. Yeah, really. 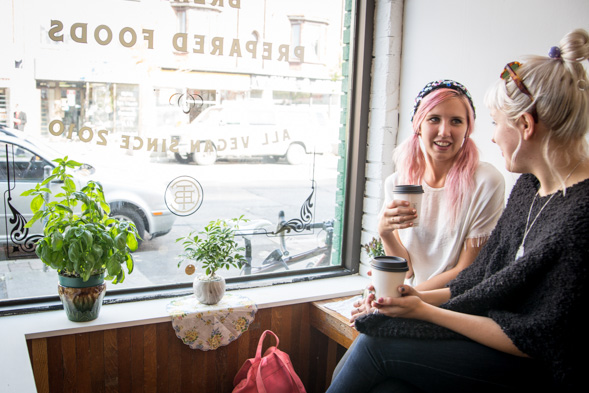 Phew. After all that art and shopping, it's time to fuel back up. For an afternoon snack, I'd indulge in one of the impossibly good doughnuts at Through Being Cool Bakery. If I was lacking a sweet tooth, a visit to Caribbean Queen would be in order. They make one of the best beef patties in the city. If it was warm out, I might stop by the Lansdowne Cone for a treat.

My ideal day in Bloordale would certainly involve having dinner at Ortolan, which does Mediterranean-inspired fare impeccably and always has interesting wine on offer. The Emerson is also a favourite for comforting food and ambitious cocktails. If it's a seafood kind of night, I head to the The Farmer's Daughter. Piri Piri is a bustling churrasqueira that is great for family-style feasts. For Scandinavian fare, there's no better place than Karelia Kitchen. 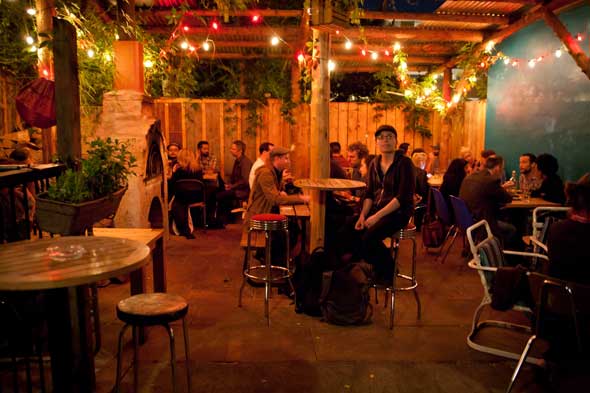 While the Junction Triangle isn't much of a hot spot for evening entertainment, Bloordale is chock full of fun places to drink. For cheap drinks and a good patio, I'll head to 3 Speed. The newly revamped Steady hosts tons of parties and events, and features daily drink specials that make my lush heart swell. For top notch cocktails, Bar Neon is my place. For a good jukebox and a retro vibe, the iconic Duffy's Tavern is a local standby. If live music is on my agenda, I'll head back to Holy Oak, which fosters up and coming musical talent and makes an amazing hot toddy.

If there's chink in the cool armour of this area, it's late night offerings, but that doesn't mean us locals are entirely out of luck. Chito's Pizza does a decent late night slice, as does Plizza along with Italian sandwiches and gelato. Ali Baba's falafel works in pinch when I'm starving at 1am. That said, my favourite late night spot is right on the eastern edge of the neighbourhood. Jerk King is open until 4am and serves heaping plates of jerk chicken, oxtail and other Caribbean specialties. A dose of Jerk King will kill your hangover before it even begins.

What did I miss? Add your suggestions for how to spend a day in Bloordale and the Junction Triangle to the comments.