The Annex Billiards Club is a snooker player's paradise

The dim fluorescent light at the Annex Billiards Club creates a shadow around Matt Bayley as I see him hoist himself onto the scrubbed 12 by six foot table. His leather jacket blends with the darkness of the room. The other players of his weekly tournament, and me as an observer, lean against the sideboards to watch him. Pushing his worn cue stick forward, he sinks the chipped indigo ball into the wooden pocket. "Yes," he murmurs, "Five points."

With ten participants, this Sunday tournament is the most successful one Bayley has hosted since he started ten months ago. Canadian sports networks will not air snooker tournaments like these anytime soon. That doesn't mean snooker isn't played. It just means that instead of arenas, players are going to places like the Annex Billiards Club.

The club is where fast-talking Hungarian card dealers, hustling pool players, and brilliant political junkies will talk to eager learners like me. It's a quiet place where billiard shooters, aged 30-70, can compete without the heavy bass of rock music found in sports bars. I have discovered many will stay crouched over one of the eight snooker tables from 10 a.m. until the doors shut at 2 a.m.

There are not many serious snooker players left in Canada. Players at the club are trying to revitalize the game but when I talk to those playing in the tournament, I begin to see that even some of them wonder if it's too late.

Located on the upper floor between a Sobeys and a yoga studio, this is not one of the popular addresses on Bloor Street West. Tobacco drifts inside from the smokers who huddle around the entrance. Inside are dirt brown walls where a portrait of Cliff Thorburn gazes down as the men try to decide which red ball to hit.

I notice the concentration only breaks when the players need food. In the other room, there are chairs and booths with red and gold upholstery, a throwback to the 1970s when the club opened. A large flat screen goes unnoticed, as patrons strategize their next game. "The game is about ego. The players expect a lot out of themselves," the manager Dennis Ingham says to me during a break between games. 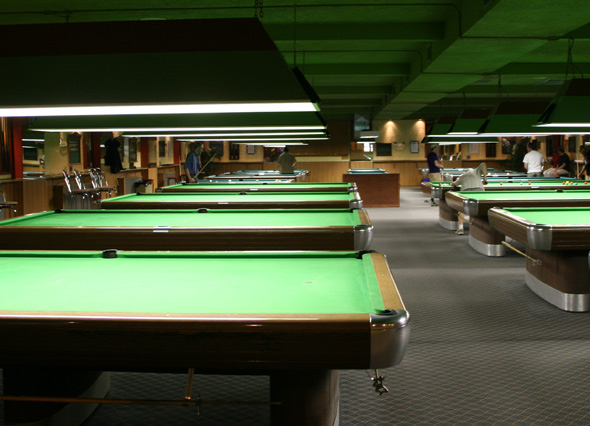 As the games go on, each face wrinkles with silent determination as he tries a different blocking technique. After one of the men with graying hair loses, he will wander to the smaller pool tables at the back of the room while I stay near the front to watch.

"Snooker needs an idol for kids to look up to," agrees Ivan Hirschowitz, head of the press office at the Association of World Snooker and Billiards in England. Snooker tends to gain popularity in the countries with winning champions. But in Canada, the talented athletes are stuck in these small billiard rooms.

At 8 p.m. the tournament draws to a close. Bayley ends the day by rolling the balls over to put them in the rented black holder hanging from the light. Next Sunday Bayley will trudge in for another tournament.

"I shall be Robin Hood," he says to me in a lilting British accent. "I will get a band of merry followers to help bring in more snooker players."

Billiards and snooker, on the other hand are played on a big 12 by 6 foot table. With these two games, the balls are "potted" instead of "pocketed" In billiards, there are only three balls: a red object ball and two cue balls. You get points by potting the red ball, potting your cue ball off the red ball, or hitting the red ball and the opponent's cue ball in one stroke.

Snooker is a bit more complicated. There are 22 balls in total. 15 red, a cue ball, and one of each yellow, black, pink, brown and green. The basic object of the game is alternately sink red balls and coloured balls. The red ones are worth one point while the coloured ones vary in the points.

There are more rules to each game, of course, but just remember to look at the table size and then what kind of balls are being hit.