Inside the College of Sports Media

The College of Sports Media is a modest private career college in a city overcome by ostentatious post-secondary education. The Yonge and Dundas area has been painted Ryerson's blue and gold, the St. George vicinity is effectively University of Toronto land, and George Brown's banners are unavoidable on Adelaide East. But right in the middle of the city, in a lower-level former agency-space on George Street, post-secondary students are being groomed to take over the sports media industry. So even if you don't see them now, there's a good chance you'll see a whole lot of them later. 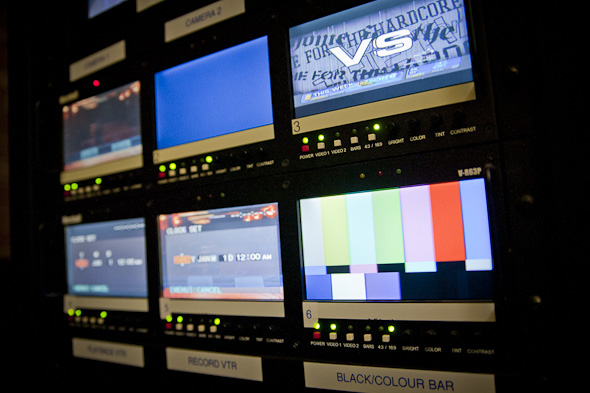 There was more than just city tracking stirring my interest of the College of Sports Media. As a Ryerson journalism alumnus, I was curious to explore a school of which I had heard absolutely nothing before donning my graduation robe. I've been in the j-school bubble--and, more importantly, left it and entered the real world--so I was interested to find out the mantra behind this school, and just how it has been able to joust among the journalist-producing big boys. 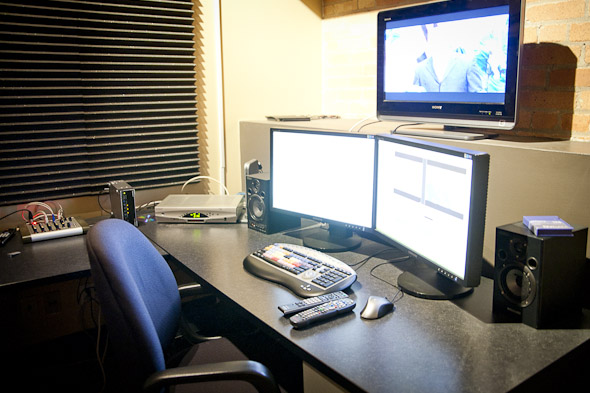 The College of Sports Media is on George Street between Richmond and Adelaide. If you blink, you'll miss it, and if you try to get enter through the door off the sidewalk, you probably won't get in. I cross through the parking lot and spot a little teal sign that told me I was in the right place. Down the stairs I find a trendy, industrial-looking place, rich with wood, glass panels, hanging lamps, and exposed vents. If Ryerson's halls--in all of its lockered glory--make it akin to a high school, then the College of Sports Media is the swanky downtown office it inherits after graduation. 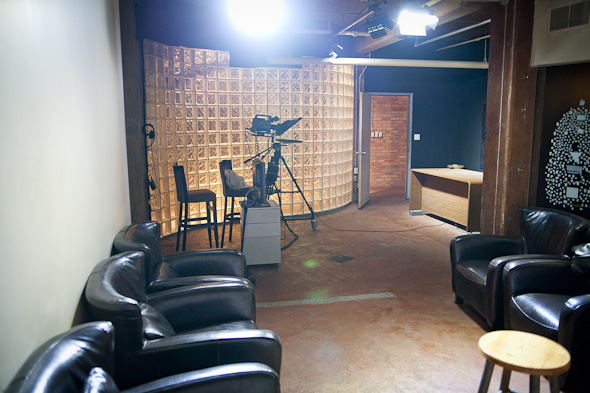 David Lanys, the College's president, meets me at the entrance, and we pass by a glass-encased basketball and headed to his office. There he tells me he started the college in 2007 after years of mulling and dealing with unprepared interns while working at The Score. "They were underdeveloped in the fundamentals of reporting," he says, of the then soon-to-be college and university grads. "They just couldn't give me a story." 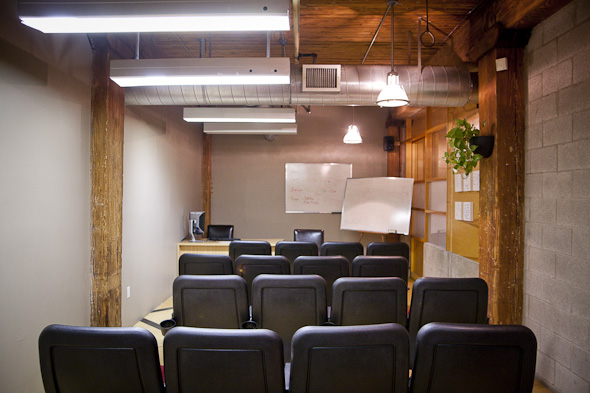 His frustration spawned the idea of a journalism school rooted in practicality. Though Lanys originally thought the school would teach general news reporting, a conversation over lunch with then Toronto Argonauts owner Howard Sokolowski affirmed his inclination that sports media was the way to go. "Everyone I knew was in sports," Lanys says. "Once we got Phil King," he adds, referring to the school's advisory board, "everyone else followed." 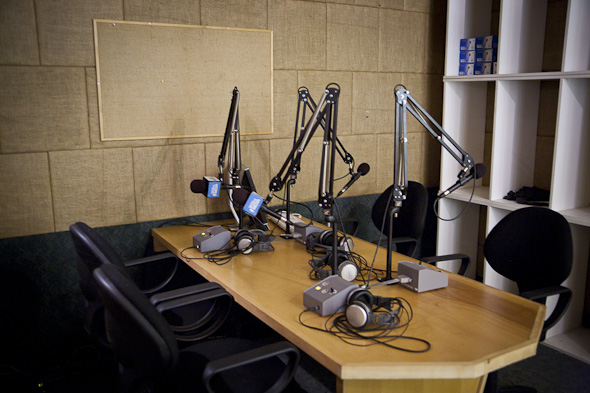 The roster of venerable advisors and instructors is part of what attracts the school's 80 students to its facilities each year, according to Lanys. So too does the hands-on approach, individual and immediate critique, and guaranteed internship with sports broadcasters including TSN, CBC Sports, and The Score. 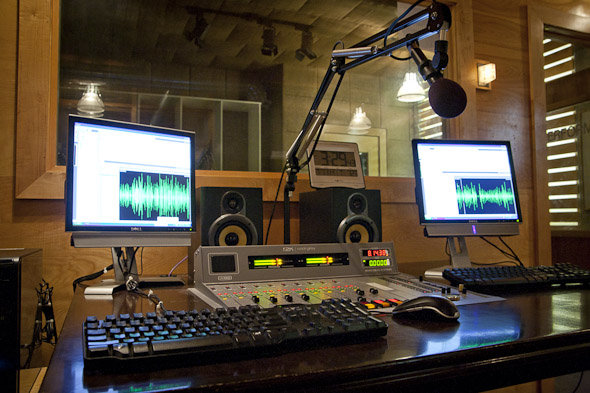 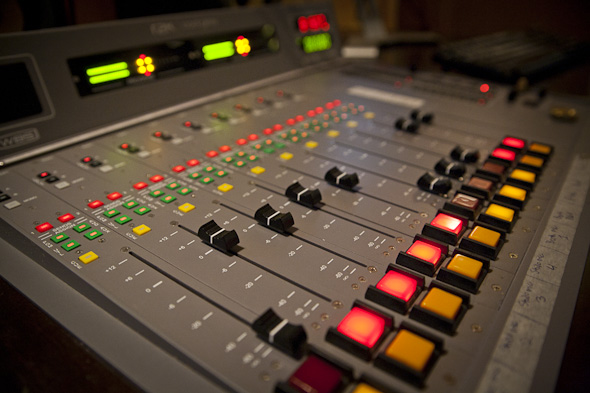 We tour the facility, checking out the two professional newsrooms, edit suites, control rooms, and studios. As far as I can tell, all of the equipment is the latest and greatest, and the space certainly has a real-world feel. But in exchange for all of that latest technology, personalized attention, industry contacts and more, students have to fork over a pretty penny--$17,000 a year for the two-year program, to be exact. "It's not cheap," Lanys says. "That's why we have to deliver a good program." 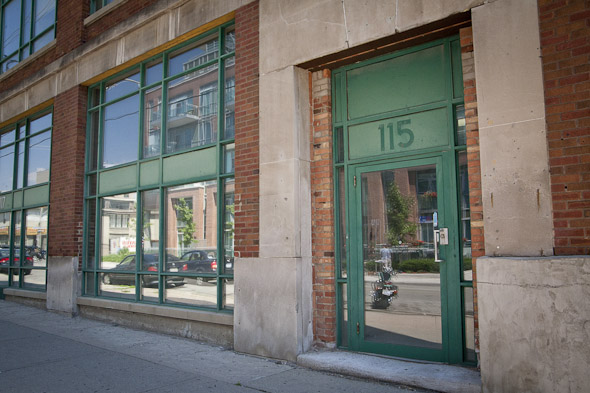 And I suppose the results speak for themselves. The college boasts that over 80 per cent of its graduation class is employed in the industry, a figure that seems astounding to me, a Ryerson journalism grad. "Some are at Rogers TV, a bunch are at the Fight Network," Lanys says when I ask where they all end up. "And for the next Olympic Games, we're sending 30 students to volunteer with CTV. We did it for Vancouver, and it worked out so well they asked for as many as they could get this time."

So, clearly big things are happening in this underground space on George Street. It just takes looking beyond the flashy banners to find it. Consider it burying the lede. 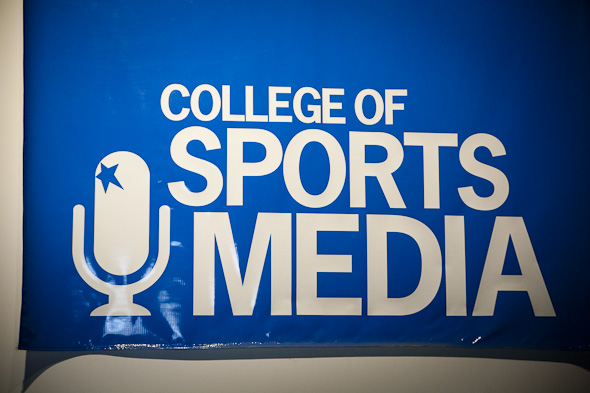