Sherbourne Common Park now boasts a brand new artificially controlled pleasure skating rink. And though it might not be much to look at right now, the rink is a welcome addition to the ever (re)developing Toronto waterfront. I stopped by earlier today to have a look at the new facility, but was disappointed to find no skaters in sight.

Making up for their absence, however, was the presence of Scott Atwood from Toronto Parks and Recreation. He told me that despite the relatively few skaters who have visited the rink since its opening yesterday, the initial response has been very good and the weekend is thus likely to be busy. As far as the coming snow goes, it'll pose a few problems as city officials work to clear all their facilities, but one can expect Sherbourne Common to take relatively high priority given its recent opening. 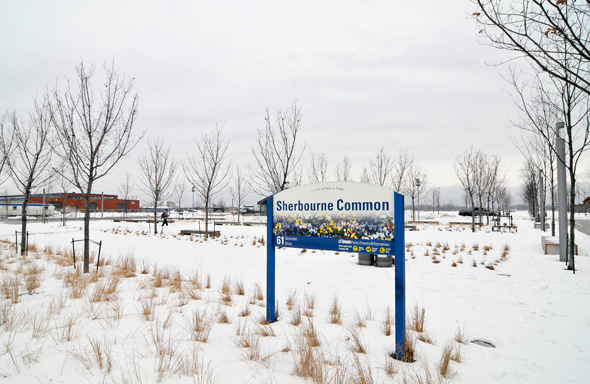 What's even more exciting is the possibility - unconfirmed, Atwood's careful to note - that the rink will stay open past the standard late-February close date that most outdoor facilities stick to. Insofar, as it'd be a bit of a shame to get the rink into full gear just before it has to close, I'll keep my fingers crossed that it does enjoy an extension into March. With underground pipes in place to cool the surface, temperatures just above the freezing mark won't pose any difficulties for the maintenance of hard ice, though a real warm spell would, of course, force the rink to close (if only until temperatures fall back to near the freezing mark). 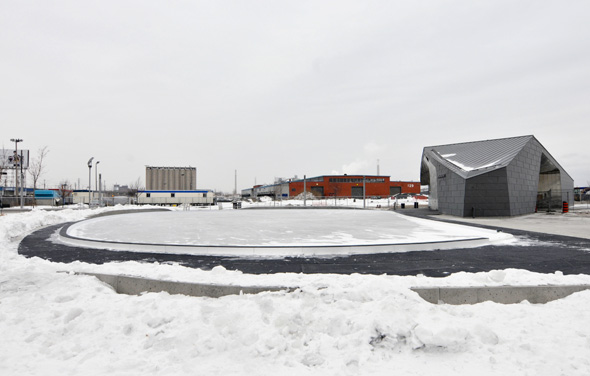 If there's a complaint to made here, it's that there aren't really proper changing facilities at the rink. While there's decent-sized washrooms on site, skaters are expected to don their blades on concrete benches located on either end of the pad (lest you want to sit on the floor). That's not ideal, but to play the role of idealist for a moment, I'll say that this old-fashioned set up will at least foster nostalgia on the part of those users who remember natural ice rinks and ponds where this was the norm.

Although I'm sure it'd be frowned upon by the City, I should also note that Sherbourne Common would make for the perfect late-night shinny venue. With few residential properties in the area, it's not as if it'll be a busy place after hours, and, as a bonus, there's basically no one to keep up. Don't expect proper nets to be installed - the rink was designed with pleasure skaters in mind - but in their absence you'll at least have a purpose for your shoes. 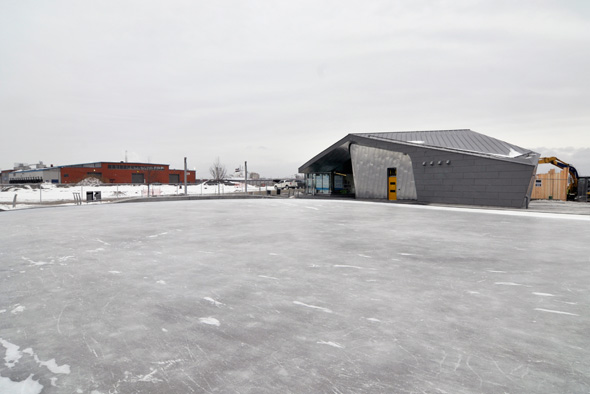