vidTO: Wendel Clark as a Rookie

During my lifetime as a Leaf fan, there have been a number of highlights. Making it to the conference finals back to back in the 1992-93, and 1993-94 seasons was pure excitement. Sitting in the golds once with my dad, watching Russ Courtnall skate circles around the opposition at Maple Leaf Gardens was father-and-son bonding bliss. Seeing Douggie Gilmour come to the Leafs in a trade for with Gary Leeman (a steal) was also memorable.

But it was another player on the "Hound Line" that gained more of my admiration than the others. With a sniper-like wrist shot and knuckles as tough as anyone in the game, Wendel Clark, the team captain from 1991-94, was one fun hockey player to watch. 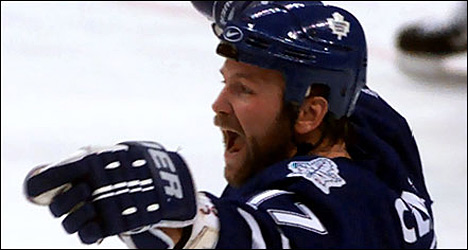 Selected by the Leafs first overall in the 1985 draft, Wendel Clark was touted as a glimmer of hope that may have helped take the Leafs to the cup. This video clip speaks to the hype that Clark generated at the time.

Where is he now? The Star did a great audio interview with Clark in October 2006, and it's worth checking out.