Broadway Cycle differs from many of the other stores I've been visiting in that it doesn't try to cater to only one type of cyclist. Instead of targeting urban utility cyclists or commuters or the high-end roadie crew, they prefer to act as a jack of all trades. Far from a bad thing, this is how most bike stores used to operate 10-15 years ago prior to the trend of specialization. Although this approach might diminish the overall selection of bikes and affiliated products in one particular sphere, it has the advantage of servicing a wider range of needs for those who do more than one type of cycling. 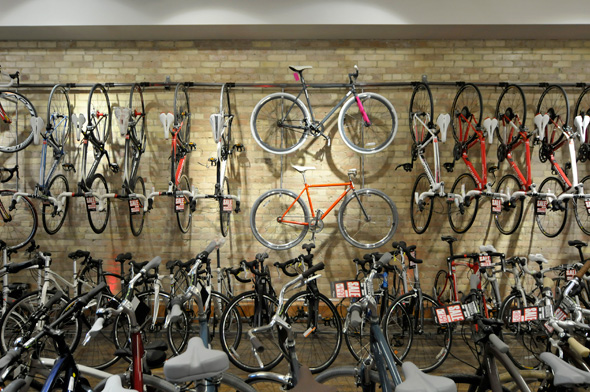 I'd put myself in this group. I own one bike for tooling around the city for work or to shoot photographs, and I have another for when I'm felling like showing off in my spandex (trust me, not a pretty sight). And because it's important to establish a relationship of trust at your bike store of choice, there's a logic to sticking to one place for all your bikes — assuming you like the staff. Such a strategy might not work for those looking for a ton of selection at the super high-end, but a place like Broadway Cycle can cover quite a bit of territory with a price range of $400-$10,000 for their bikes.

Despite the do-it-all approach, naturally there are a few areas that the store focuses a bit more energy on. Entry to mid-level road bikes would be one of these. You'll find an ample selection of Specialized Allez and other Shimano 105-outfitted bikes here, the "105" being a reference to the name of the main componentry on the bike (shifters, breaks, drivetrain). These will start at around $1500 (with an aluminum frame) and get burgeoning roadies started with a quality bike that'll offer surprisingly similar performance to what's offered by more expensive bikes. Even better, the staff at Broadway will do a professional fit on road bikes purchased over $1000 (just make sure to commit to clipless pedals; otherwise the whole exercise is a total waste). 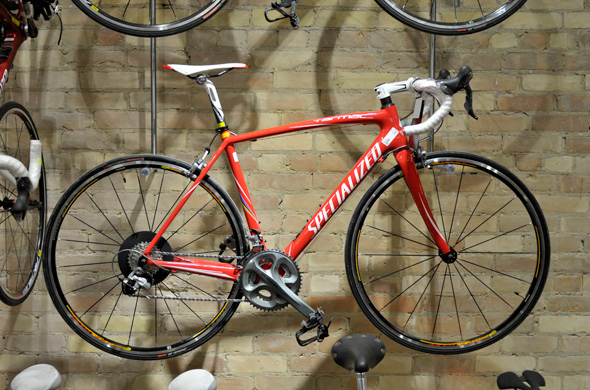 Another strong suit is the $650-$850 urban bike. They've got a few to choose from, but the winner in this category is the Globe Roll (a sibling company of Specialized), which had me drooling the entire time I was in the store. I actually checked my bank account when I arrived home just to see if I could somehow justify buying one (alas, I couldn't). If you're not into the single speed/fixed thing, there's also a good selection of more commuter-friendly options from Marin in this price range. 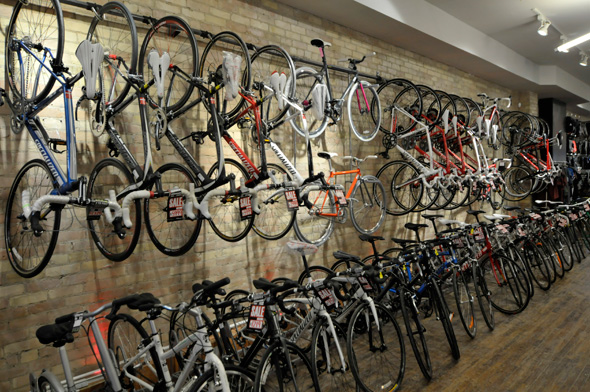 From a service standpoint, my chat with Broadway's head mechanic leads me to believe he ain't fibbing when he claims that the shop will do most repairs under the sun. When I ask about running a newer version of Shimano shifters with older brakes and derailleurs, he's quick to note that the newer component has a different leverage ratio and might lead to mushy braking. I'm not used to fast and direct answers like this from mechanics, so I'm pleasantly surprised. 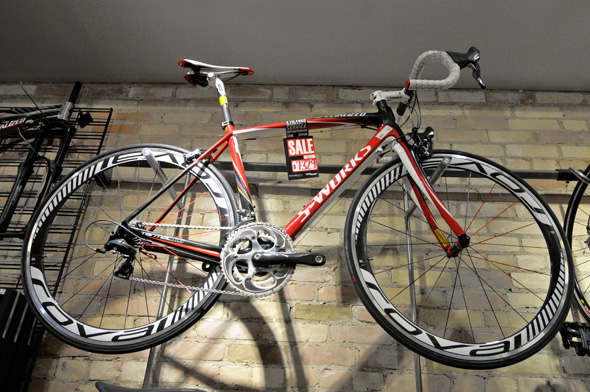 As far as accessories and clothing go, the selection of the former is better than the latter, but they both reflect the store's large size and target clientele. In other words, there's lots to choose from. There's an obvious prevalence of Specialized products, but that doesn't come as a complaint from me because I'm a fan of their stuff.

I initially thought that the competition for Broadway Cycle from Sweet Pete's would be quite strong given that they're only separated by about a 100 feet or so, but after a more thorough consideration, I'd say they're really quite different stores. While Pete's has a better selection of utility-type bikes, Broadway's mid to high-end road and mountain bike offerings probably ensures that the two don't step on each other's toes as much as you might think.

Who the store caters to : Everyone! More seriously, beginner roadies, commuters, those looking for a tricked-out city bike (fixie/single speed)

The tune-up: For $50 you get complete external adjustment of the bike (bikes, gears, bolts), and on-bike truing of wheels. If you purchase a bike at Broadway, they offer this service for 5 years free of charge.

2nd Location: The Bike Depot (7043 Yonge St.) is under the same ownership as Broadway.