It’s right next door to Woody’s Burgers, also owned by Greg Brown, where they use wood fire in a different way: to wood grill some pretty amazing burgers. 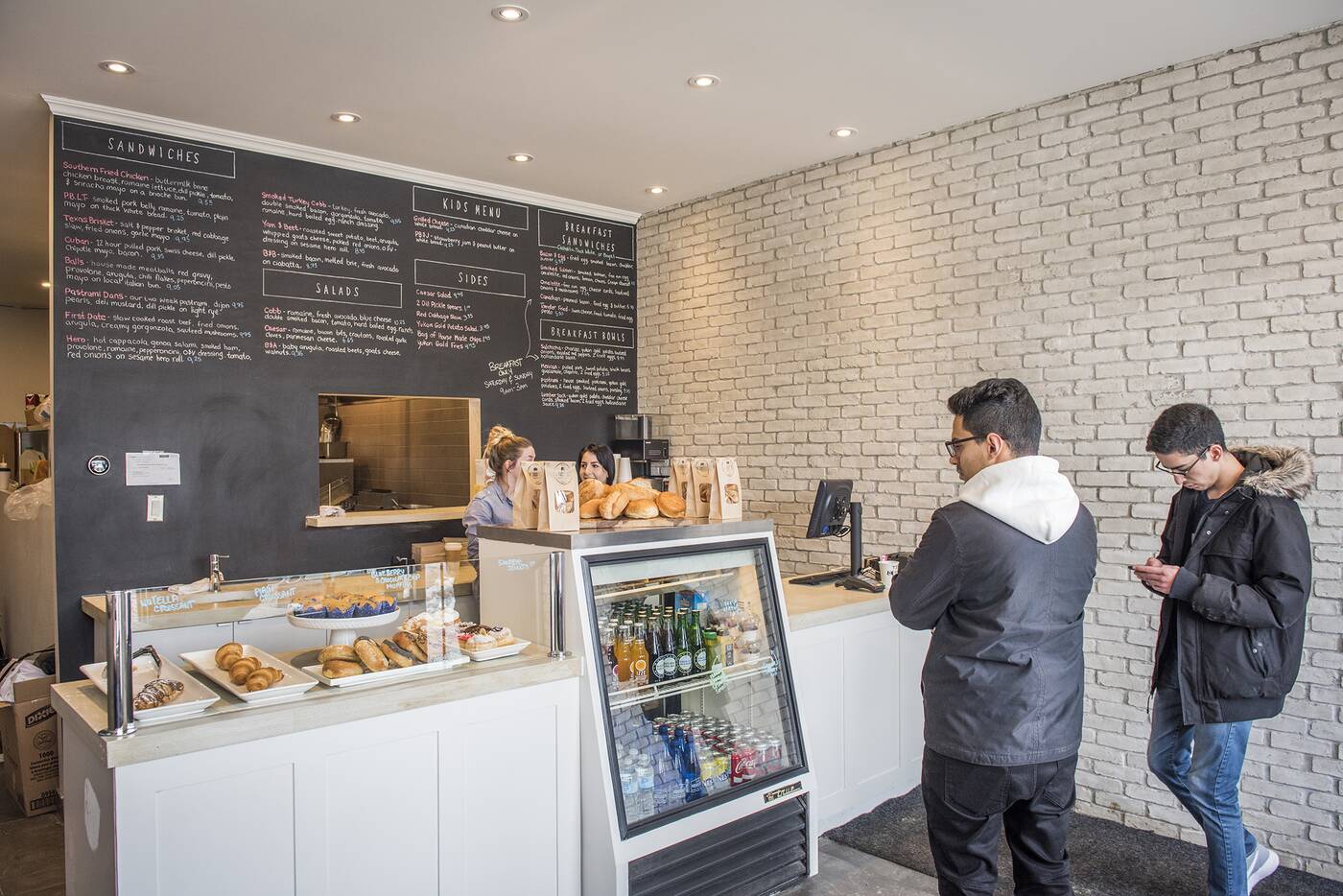 But back to Woodfire: the interior is small but bright with no real seating to speak of, other than a few stools at a ledge facing the storefront window. 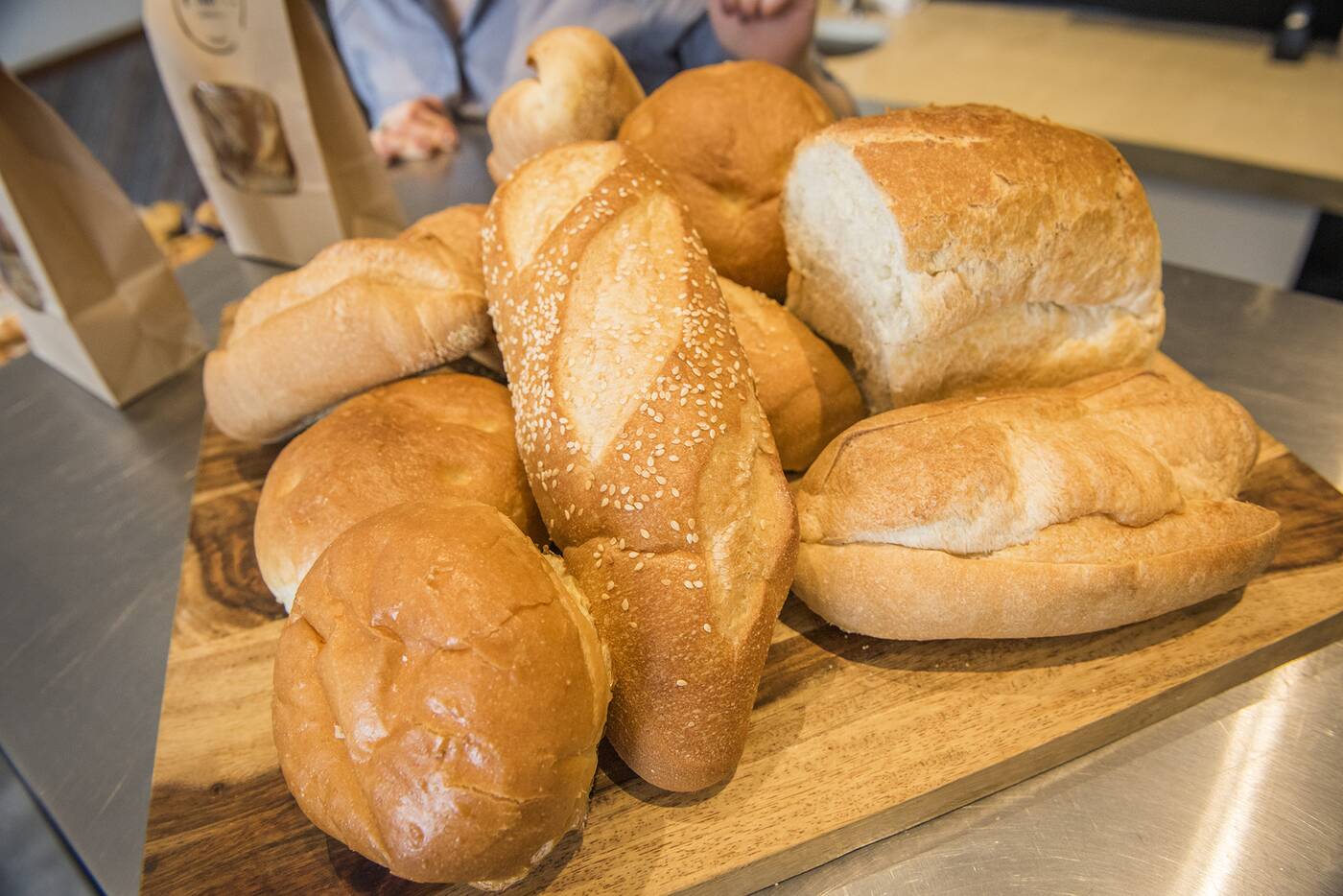 Local bakery SanRemo provides all breads including a thick white bread for breakfast, except for a brioche made by Ace typically used for their fried chicken sandwich. 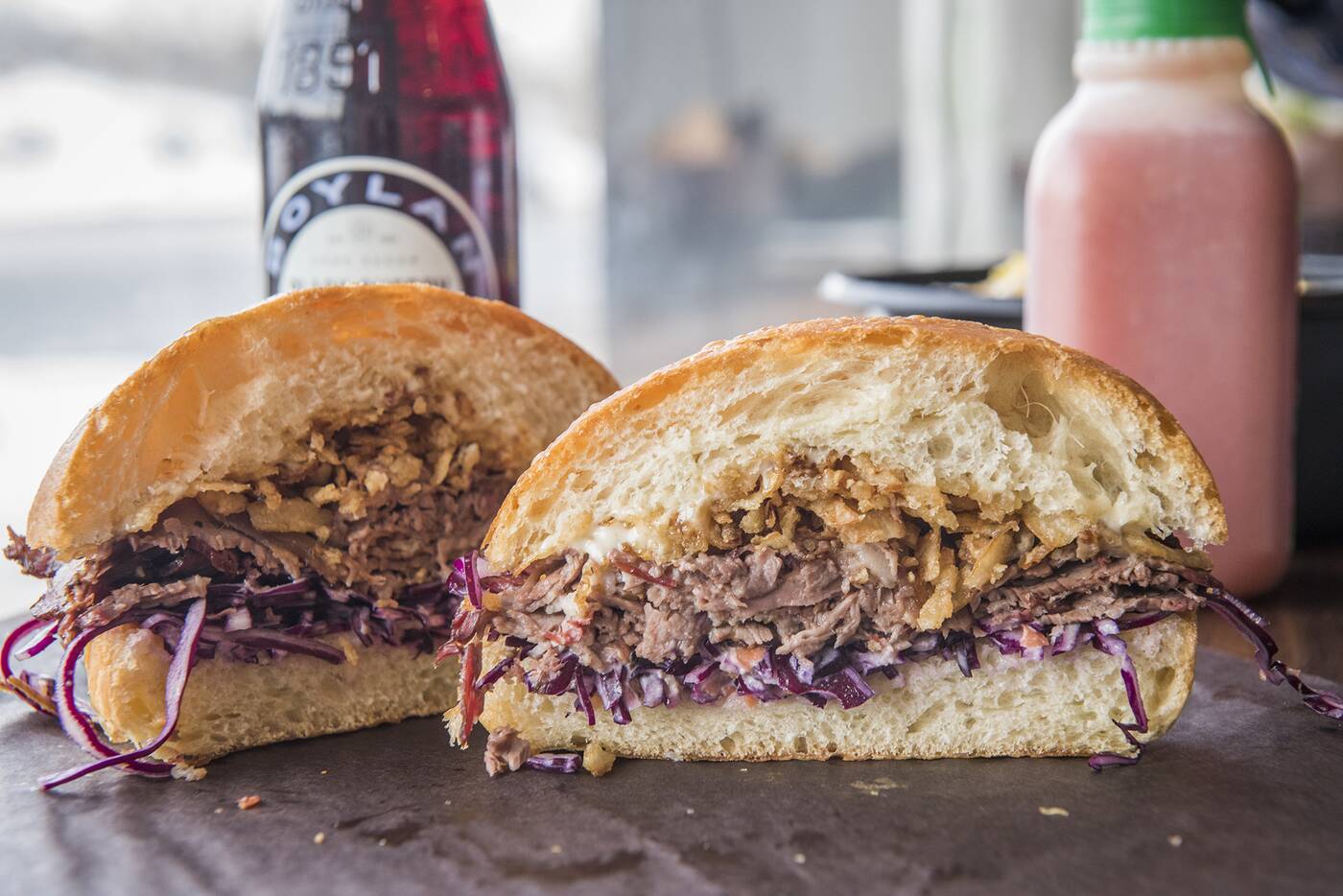 The Texas Brisket ($9.75) is on SanRemo’s fluffy, thick potato bread, a basic salt and pepper brisket smoked for about nine hours or until it reaches a temperature of 195. It’s set off nicely by a garlic mayo, crunchy red cabbage slaw and crispy fried onions. 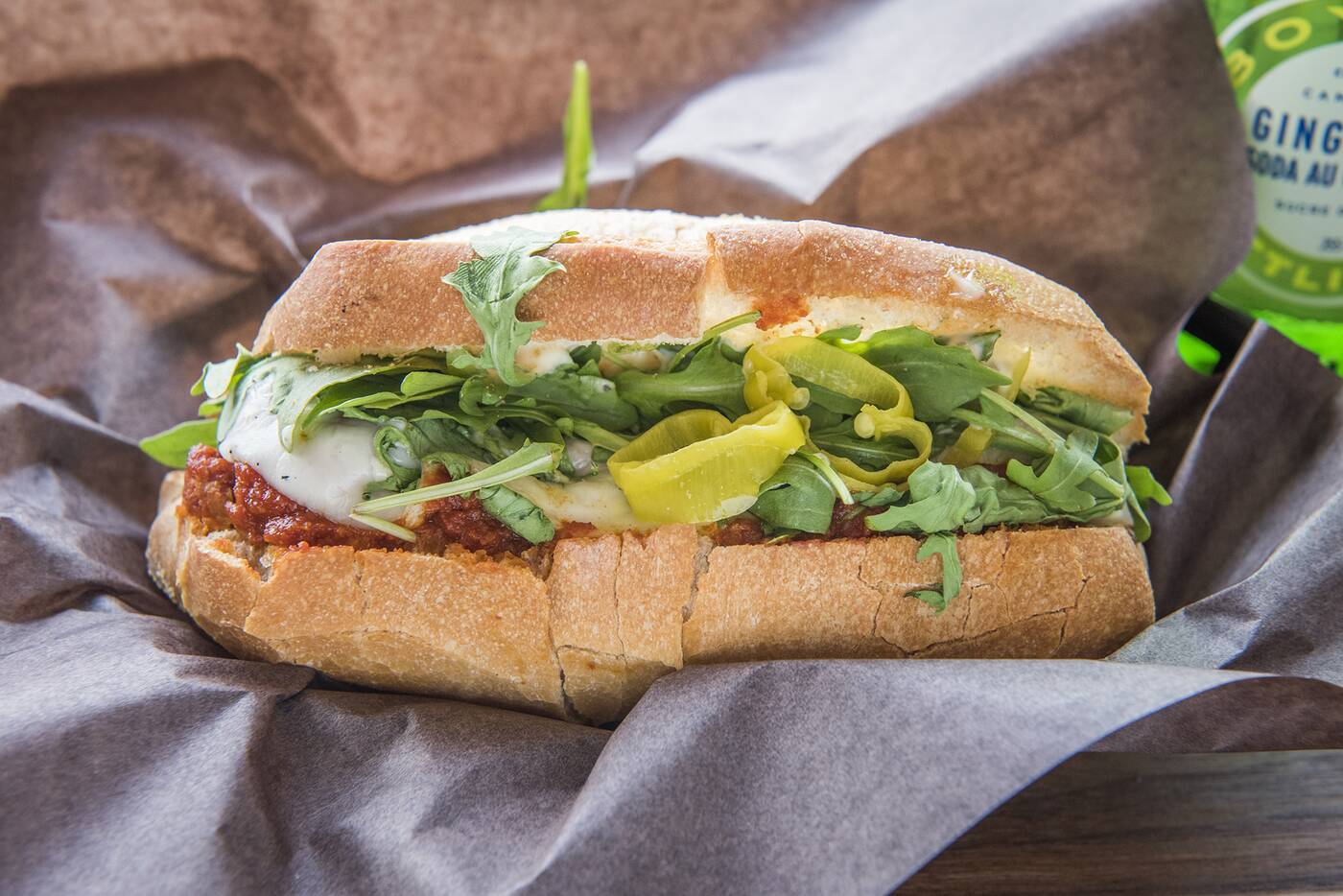 Balls ($9.05) may have a bit of a dad joke for a name but the flavour is serious. Definitely standing up to other great meatball subs on a crispy but soft Italian roll, house meatballs are smothered in red gravy with a substantial layer of melted provolone, arugula, pepperoncini and a pesto mayo.

Made with beef, pork and ricotta, the meatballs are moist and a true standout. 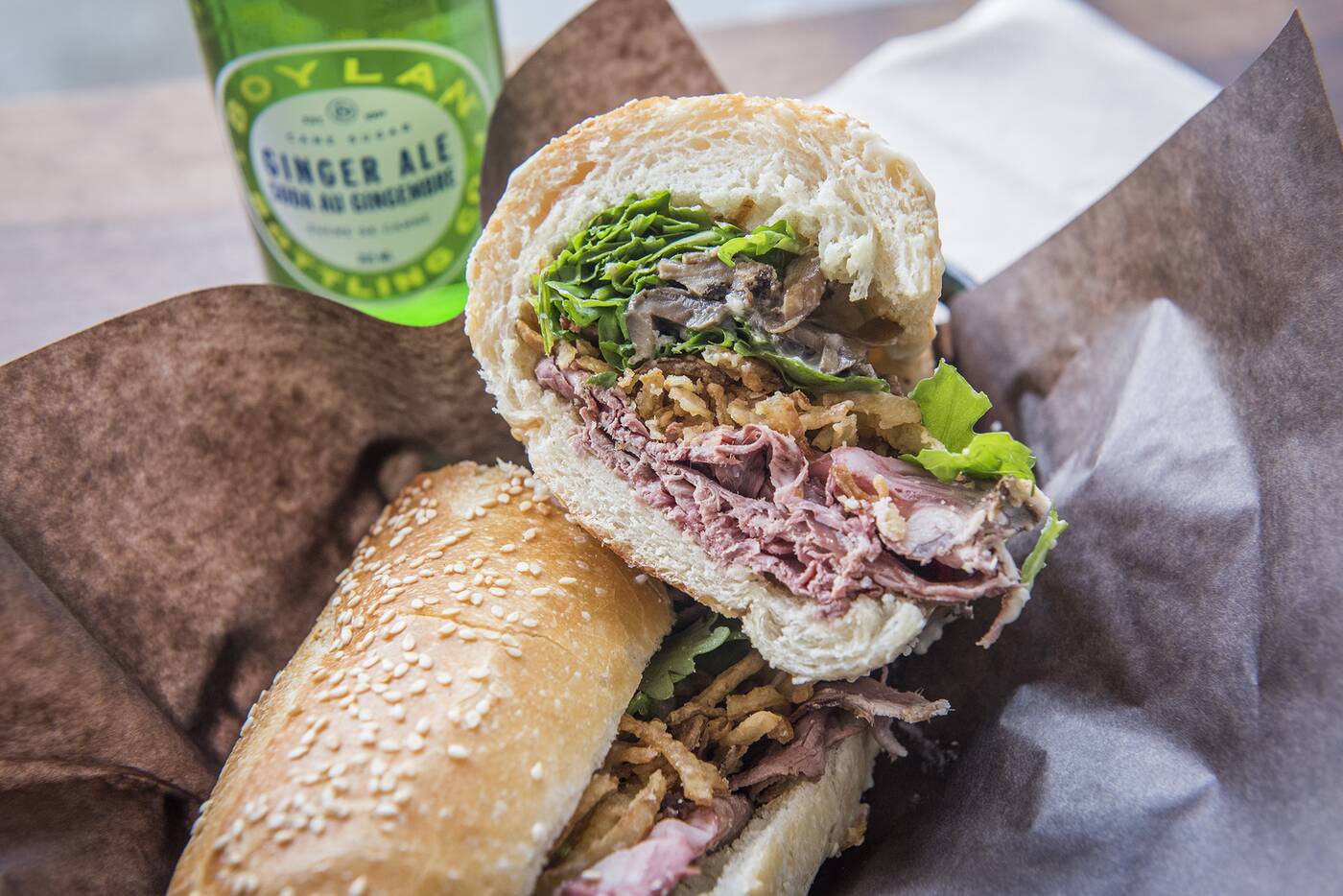 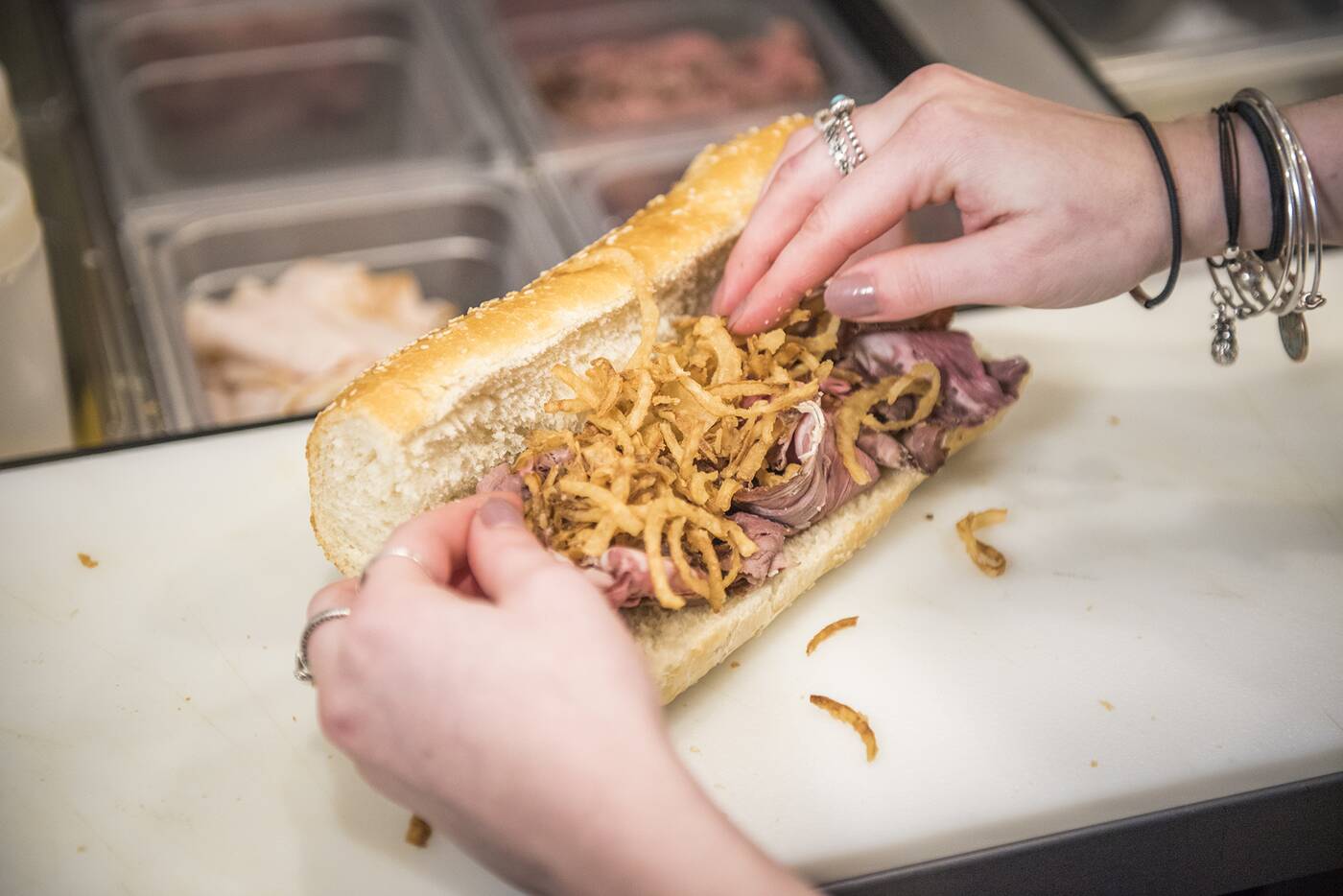 Roast beef is smoked low and slow for four hours, with a similar rub to the brisket. 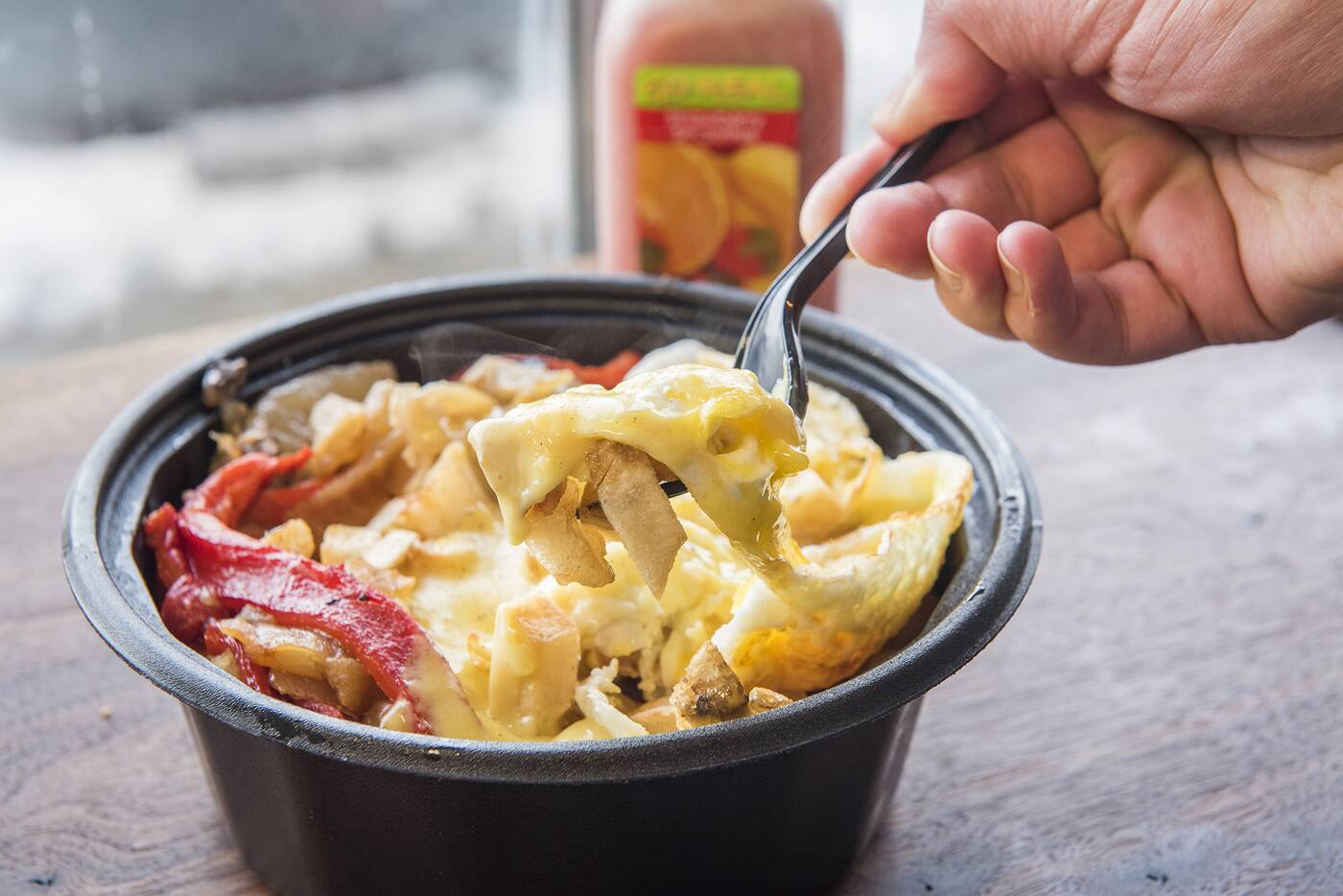 The Salchicha ($9.75) is a breakfast bowl with a Yukon gold potato hash base, onions, chorizo, sweet roasted red peppers and two perfectly fried eggs laden with a silk hollandaise sauce. Perfect for those who want to bring a restaurant-style brunch home. 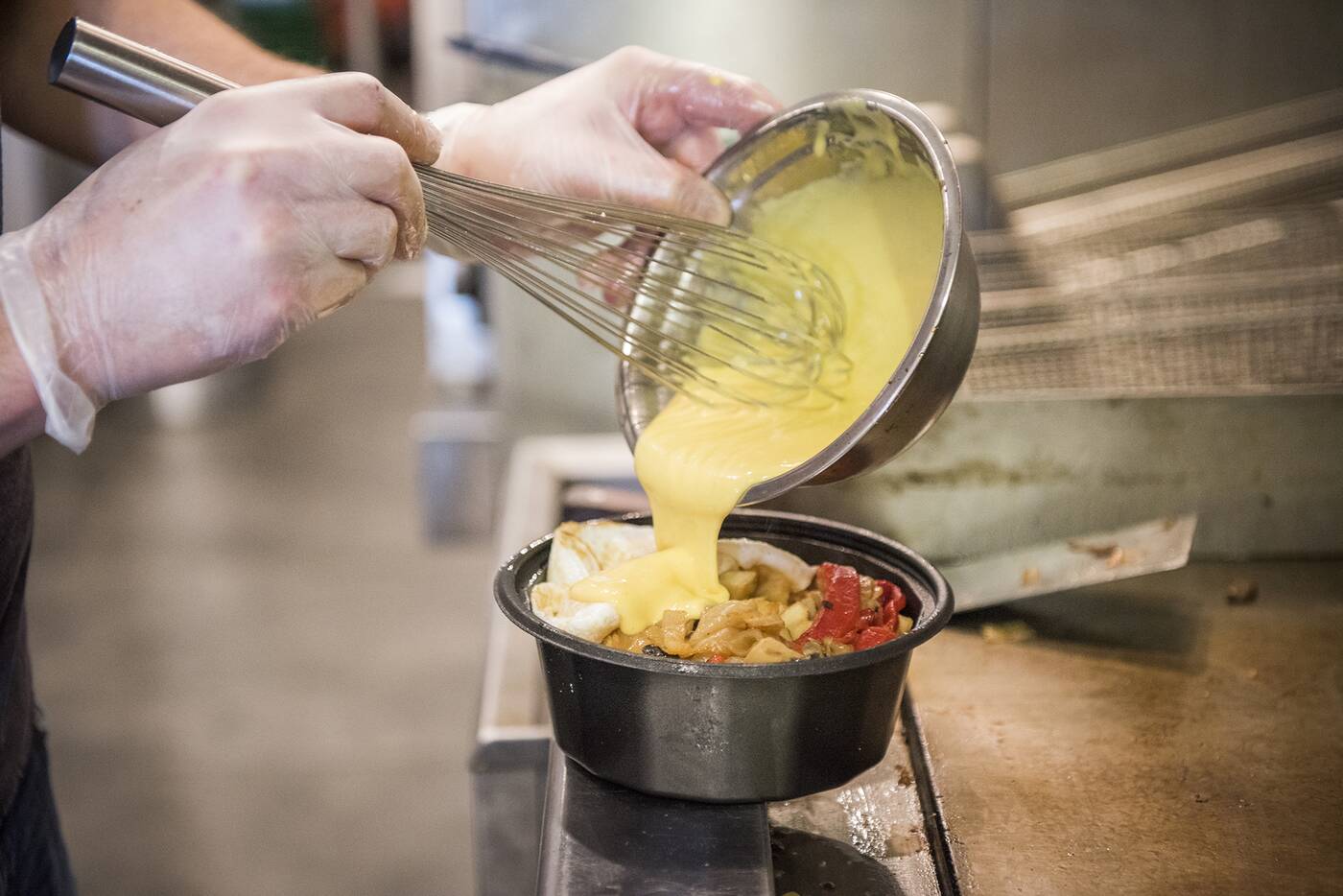 There are also breakfast bowls with their 14-day pastrami, bacon and cheddar curds, or a Mexican style with their 12-hour pulled pork, guac and black beans. 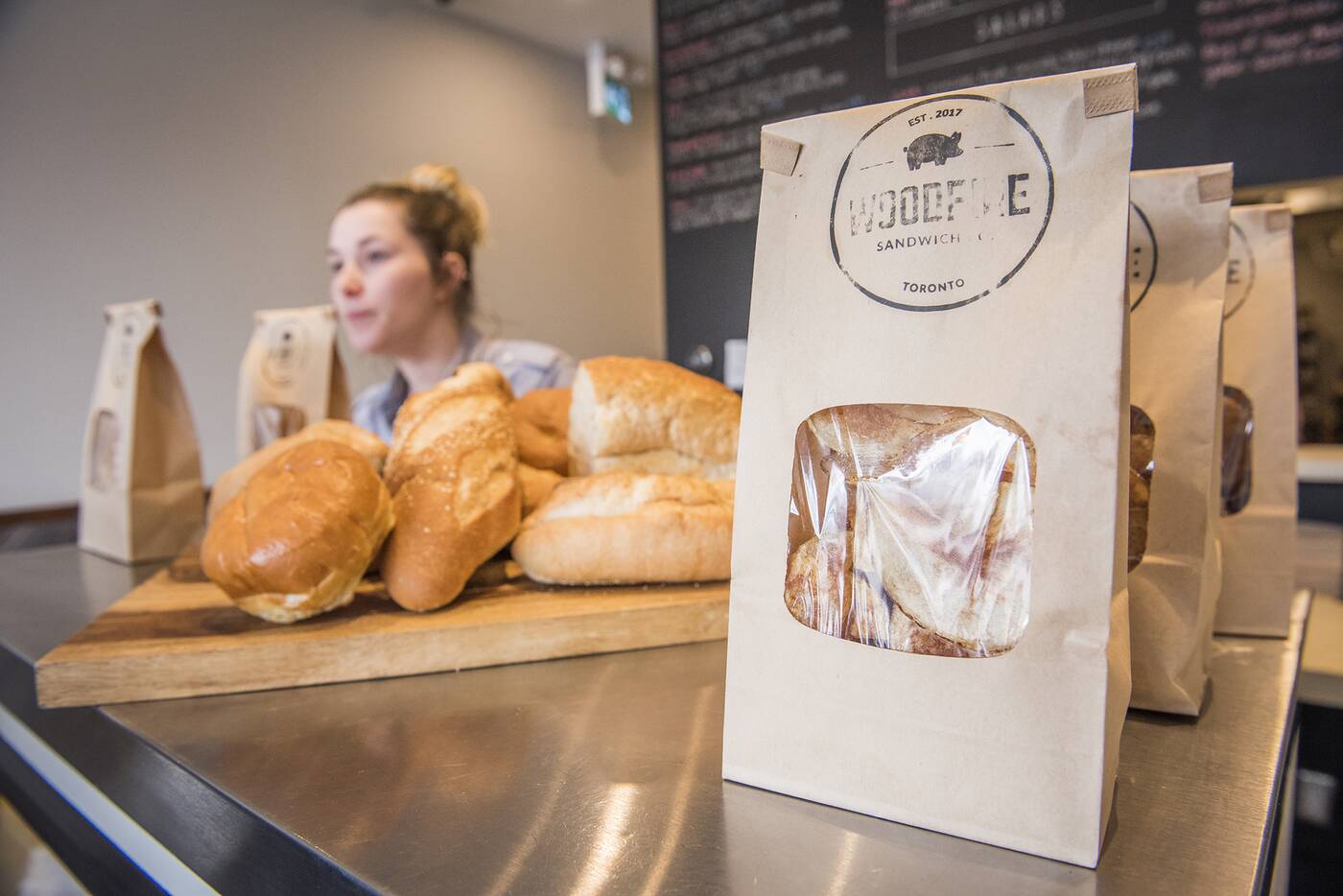 House chips make a simple and satisfying but local side for $1.95. 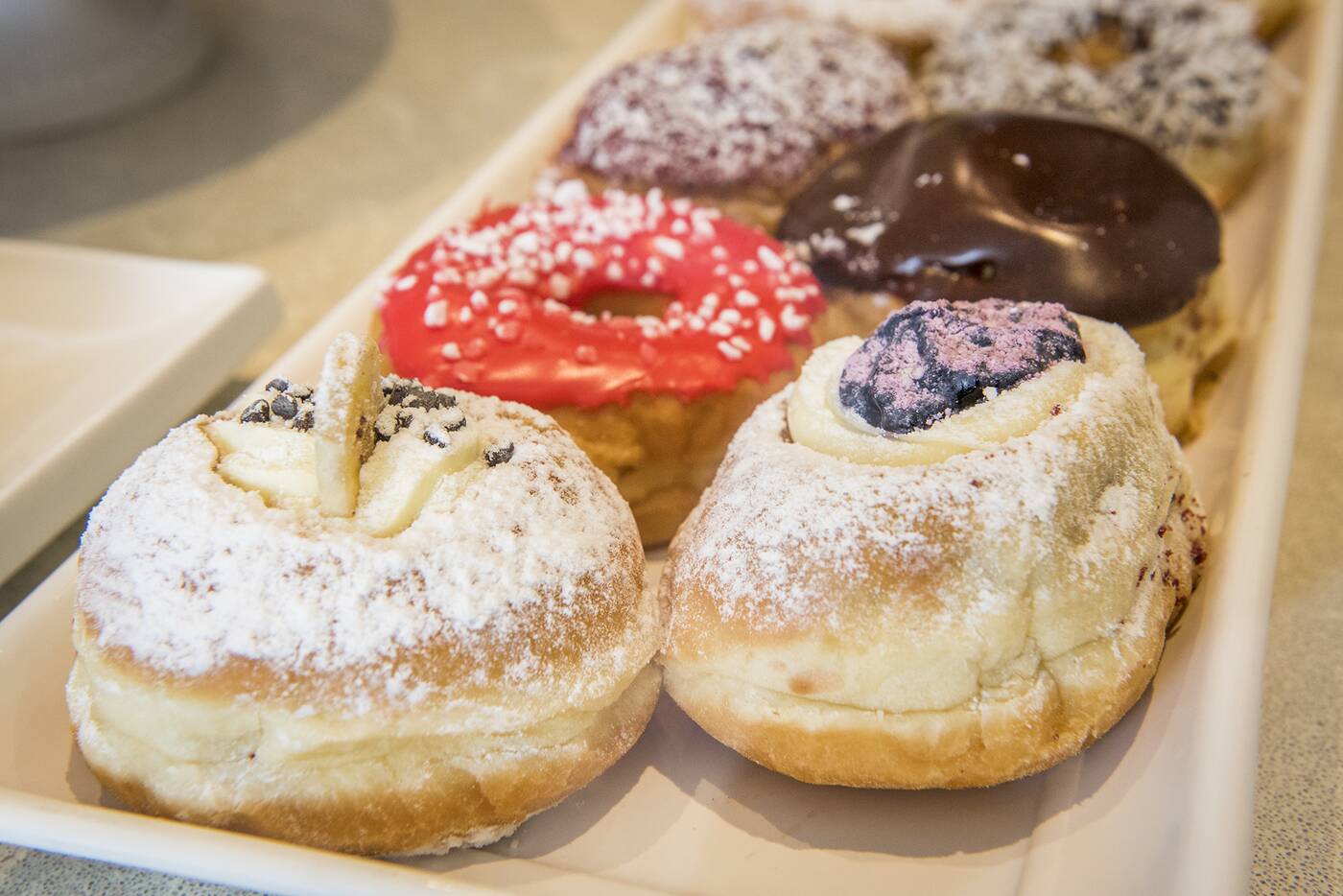 SanRemo provides almost all baked goods here including their legendary donuts. Croissants are made here. 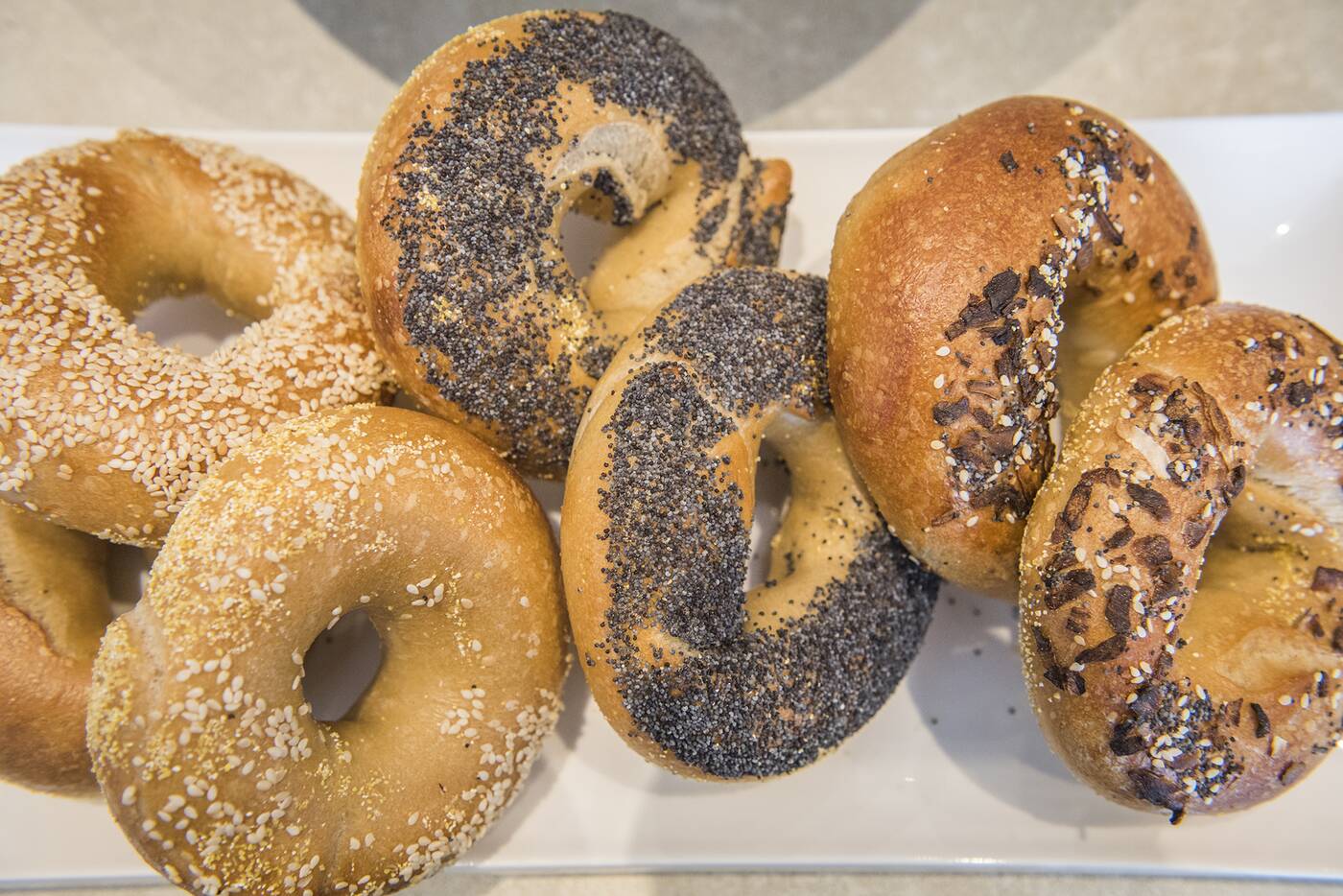 SanRemo provides fresh bagels as well, and coffee is provided by Fair Grounds not far away. 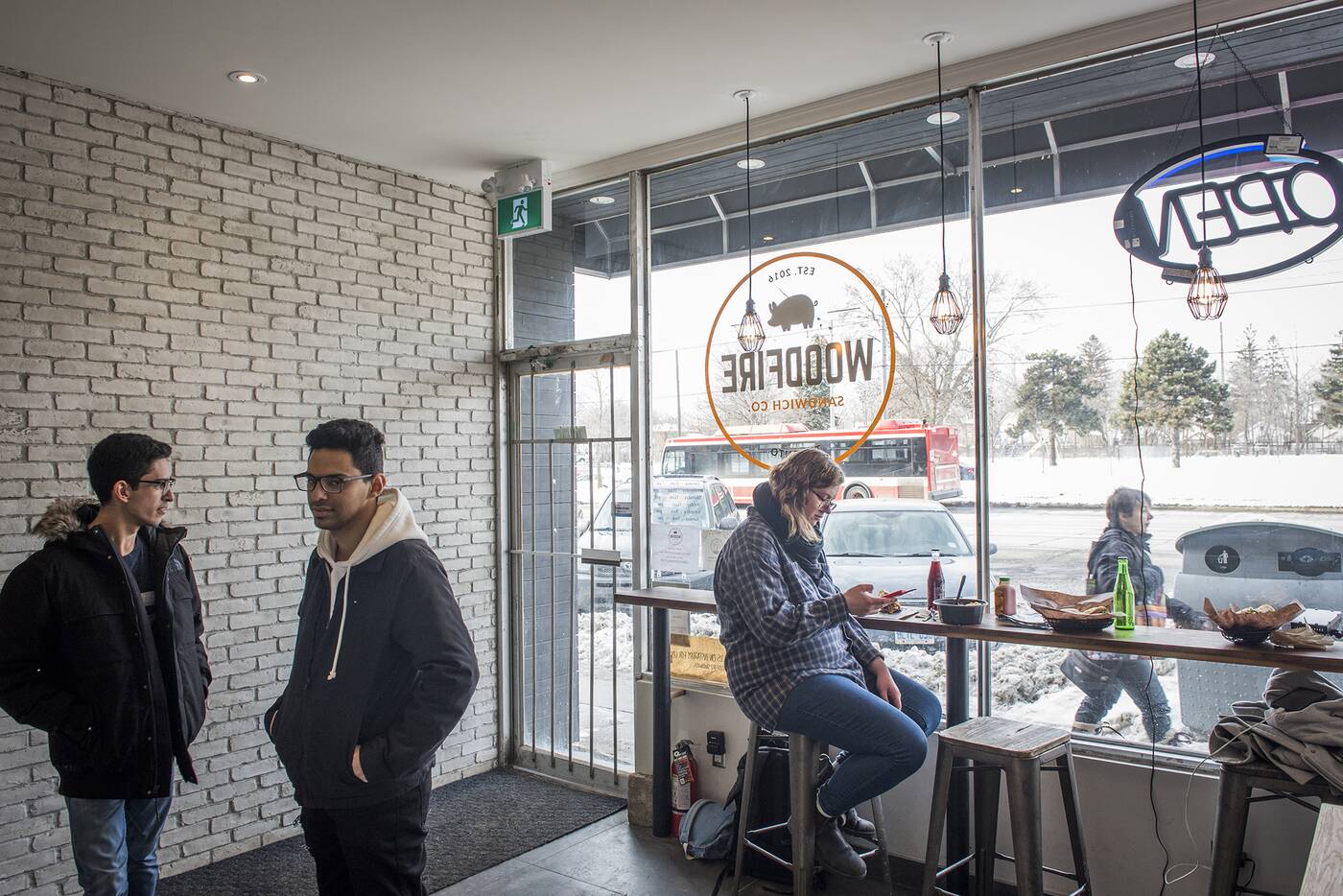 Woody’s and Woodfire are in fact connected, the smoker itself actually at Woody’s. For the sake of the smells and tastes that coming out of these two little sibling casual restaurants, I can only hope Brown and his crew continue experimenting and playing with fire. 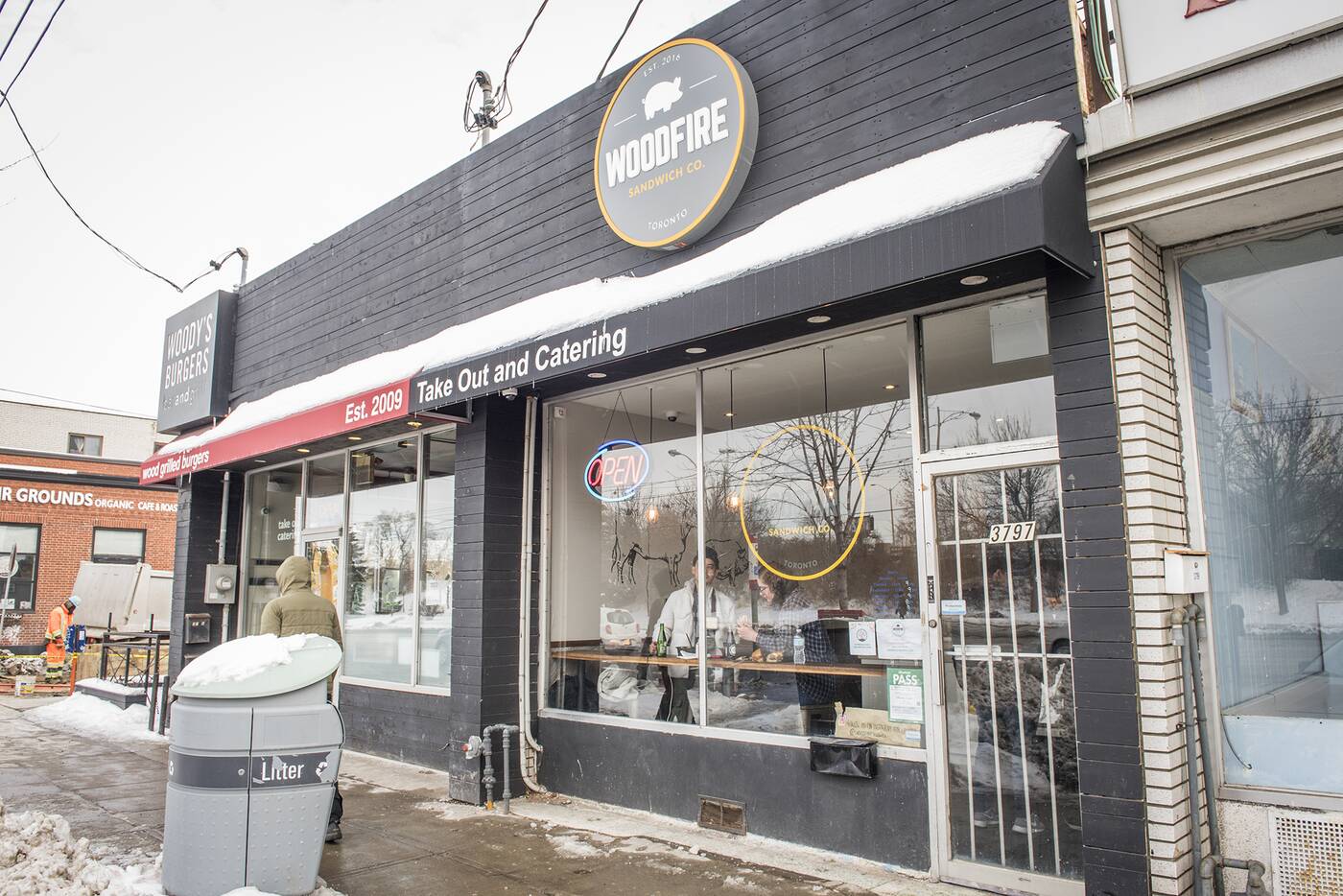