Tallboys opened up near Bloor and Shaw at the beginning of this month, tossing its name into a ring already crowded with craft beer houses. And, opening in the former location of Ethiopian restaurant Zembaba , it's taking its chances on a neighbourhood not exactly known for its craft beer scene.

It's a family-run operation, with Tom and Phil Cacace and their cousin Kevin Kennedy helming front-of-house, and friend Craig Wong in the kitchen. Tom terms the area "up-and-coming," and cites the relative drought of similar businesses in the area--although a new bar is slated to open just next door. "We wanted to create a spot that was comfortable and friendly," Tom tells me, and the locals have already picked up on it. There's even a whiteboard above the bar where you can buy a beer for an absent friend, to be claimed the next time they're in. 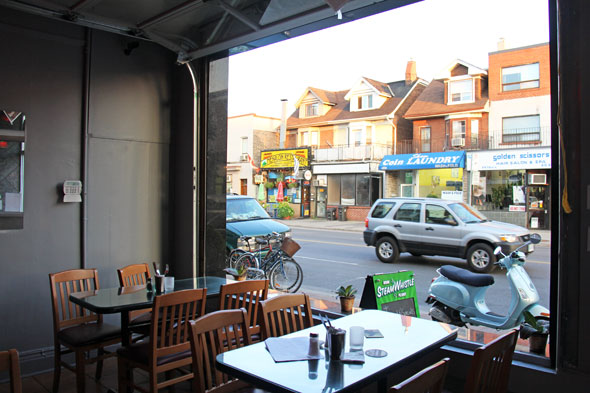 The spotlight feature is instantly visible: a roll-down, garage-door-style front window that neatly approximates the sensation of being on a patio, although the season is already running out. The bar area and surrounding walls are painted a bold, fire-engine red, and even the low-hanging lights cast a den-of-iniquity hue over everything.

"We're not a sports bar; we're a bar that plays sports," Tom says, and mentions he'd like to add another TV to the twosome and projection screen already in place. Loose allusions to Toronto transit history line one wall, through vintage prints of streetcars ( Schindler's List -red in otherwise monochrome photos) and the painted names of nearby subway stations. "We love Toronto," Tom explains. 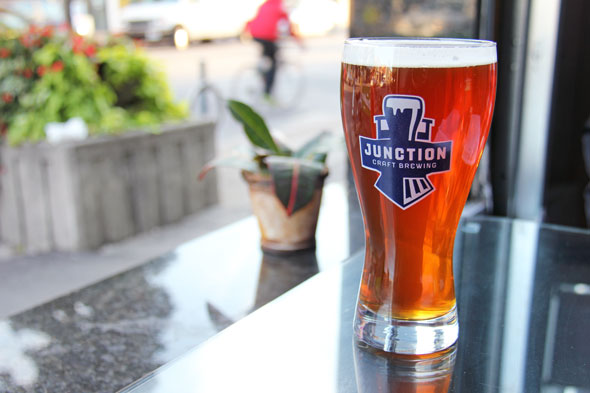 With an exclusive focus on Ontario craft beers--and tentative plans to branch out to Quebec or Nova Scotia--the list of cans includes Wellington Boot Chuck, Mad Tom IPA, and Kensington Augusta Ale, and range between $6.25 and $7.25. There are no bottles, and just 5 draught lines, including newly opened Junction Brewery's Conductor's Ale ($6.50 and delicious). Daily specials feature $5 pints of Steamwhistle on Mondays, $5 cans of Wellington's Trailhead on Tuesdays, and organic Wednesdays--$5 Nickelbrook Organic or pints of Mill St. Organic. 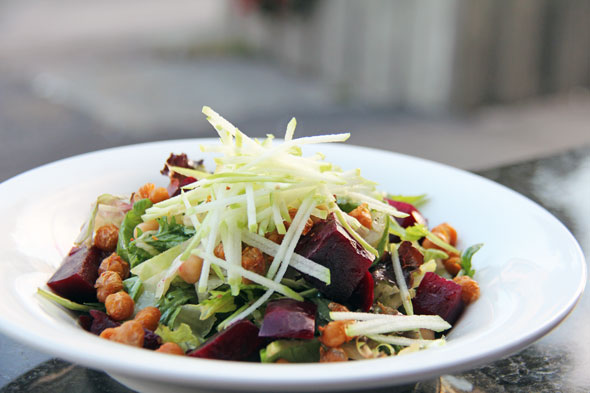 We start with Sulie's salad ($6 and named after Kevin's wife)--not offensive, but definitely disappointing. Baby greens, roasted red beets, chick peas, finely julienned granny smith apple and honey vinaigrette come together in a thoroughly underwhelming dish. We parse through the various ingredients--the slightly wilted salad base, the odd choice to fry half the chick peas--and find everything to be strangely sapped of flavor. 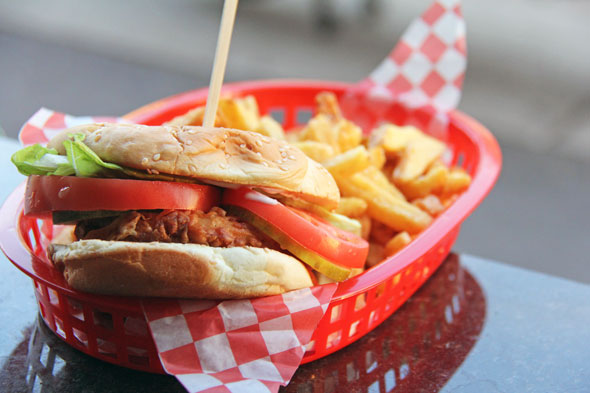 The crispy fried chicken sandwich ($13) is a vast improvement. As with many of the menu items, beer figured largely in its preparation--a chicken breast marinated in beer and buttermilk, fried, then ensconced in a beautifully soft bun with lettuce, tomato, pickle and a rich ranch sauce. The thin fried crust adds a touch of texture without detracting from the highlight--the impressively moist chicken. The fries are substantial, perfectly fried, and far too salty.

Last up are the fish tacos ($14). The fish itself can either be served pan-fried or beer-battered with a light weiss--I choose the former and opt for sweet potato fries ($3). The fries are predictably delicious--no better or worse than your typical pub fare, but served with a creamy, piquant sauce that elevates them somewhat. The soft corn tortillas come as a trio, and are filled with lettuce, an excess of sour cream, and skewered by a chopstick. The salsa fresca is mostly garlic and tomatoes, with a touch of onions, and while fresh, again doesn't impart as much flavour as I would expect. The fish is well-cooked, but like the salad, the dish as a whole is rather bland. 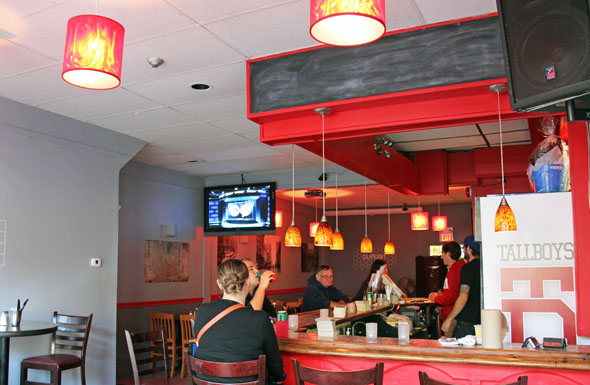 The crowd thins and swells many times over the course of the evening, and mostly consists of beer-lovers. Tom tells me that they've had the occasional naysayer--set-in-their-ways types who declare "Heineken or nothing"--but for the most part, people are willing to try something new. It's the difference between a beer "with a hundred ingredients and preservatives, and this beer," Tom says, pointing to my glass of Junction's Conductor's Ale, "which probably has four and was made over the span of a few weeks, as beer should be." 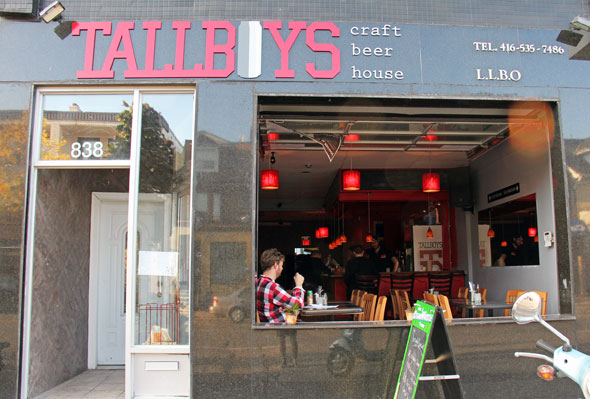 It's not a hard sell to the area's burgeoning, younger demographic, or really to anyone with a (pardon the douchebaggery) palate for beer--the flavours are more complex and the ingredients, indeed, fewer.

And as for the music: Grimes , Feist , Death Cab for Cutie and Bon Iver each trickle from the speakers, yet another nod to Tallboys' breaking form from typical sports bars. This might, in the end, serve them--after all, 3 Speed , where we end up later, is bustling, and every bit as much a sore thumb in its own area.