Soluna is a bohemian-themed oasis resembling a tropical resort with food and cocktails inspired by the coasts of the world.

The building occupied by Soluna has been entirely transformed from its previous life existing as Cube Nightclub, prior to this Ultra Supper Club, and before that BamBoo. 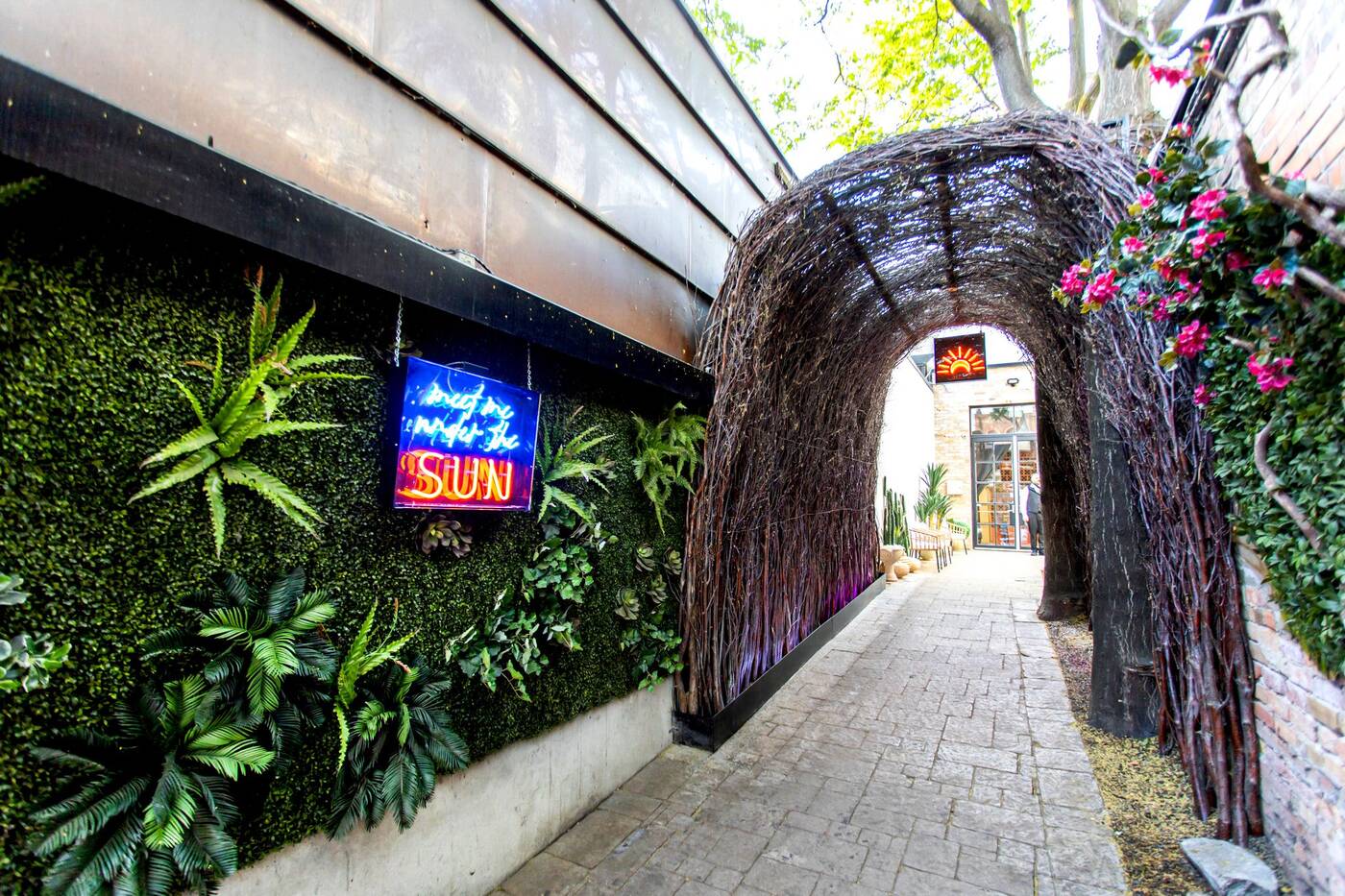 This is thanks to the visions behind this spot - Dan Gunam and Vito Tomasicchio, who both sport years of experience owning Toronto nightlife venues.

Gunam was the founder of Calii Love and still runs Love Child Social House near King and Bathurst. 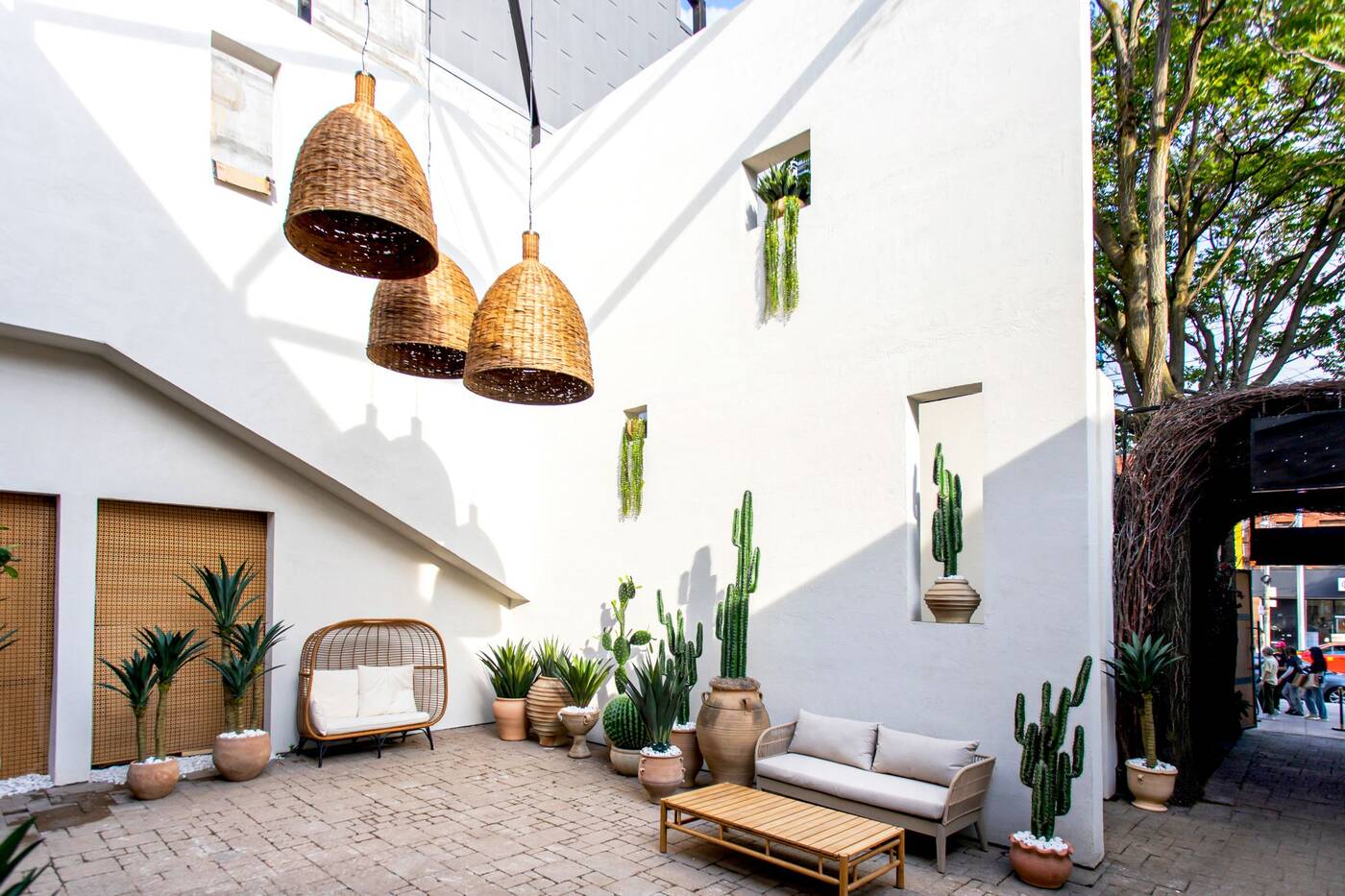 Tomasicchio is best known for his NODO Italian restaurants across the city in addition to Hush Hush and NEST near College and Bathurst.

Soluna brings together two passions of these owners - good food and fun nightlife. Dishes are served late, and as the night goes on the music gets a little louder and the drinks flow faster. 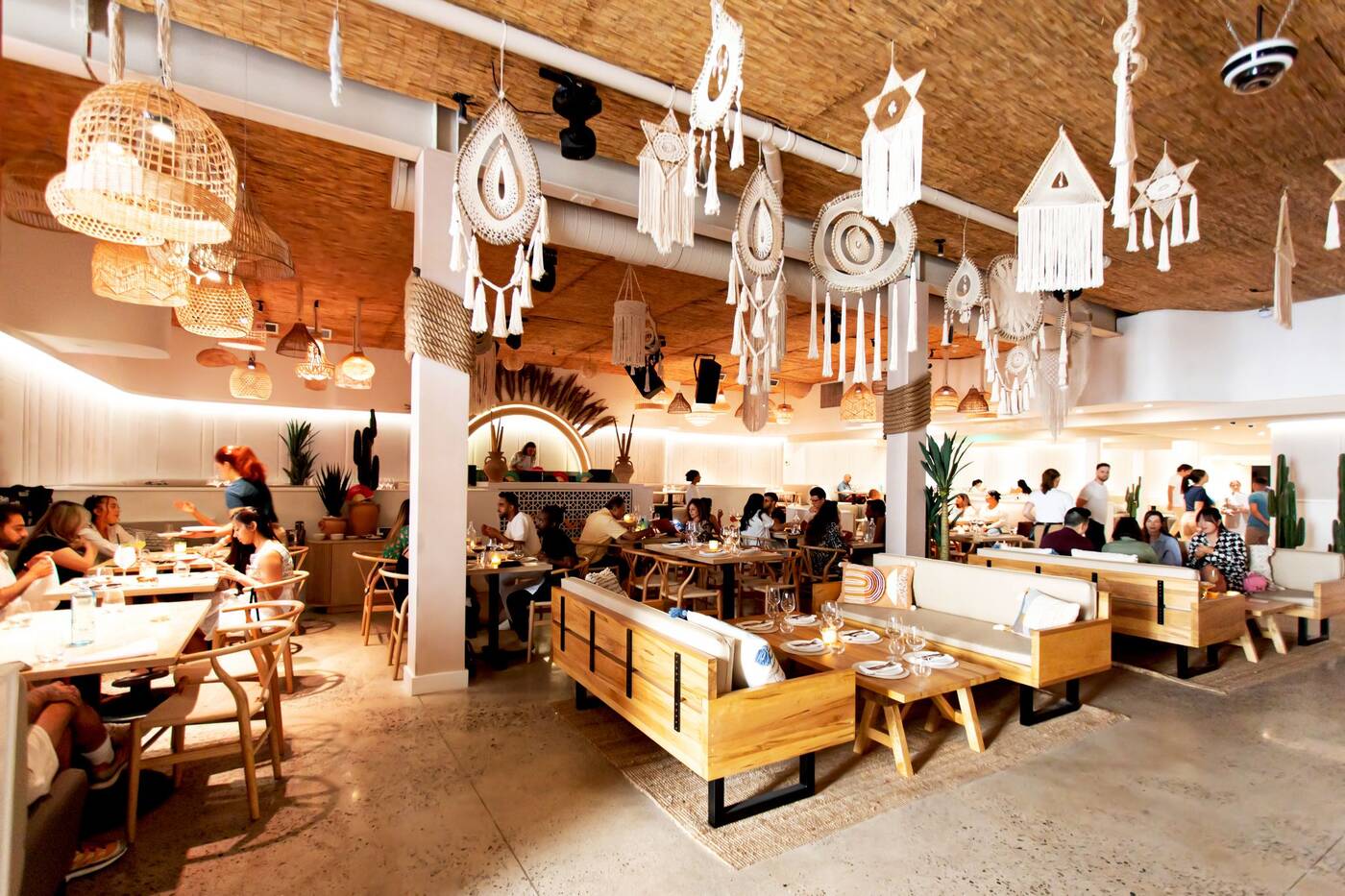 I was captivated by the interior design of this space, a series of quilted chandeliers imported from Bali dance above widespread benches and booths. 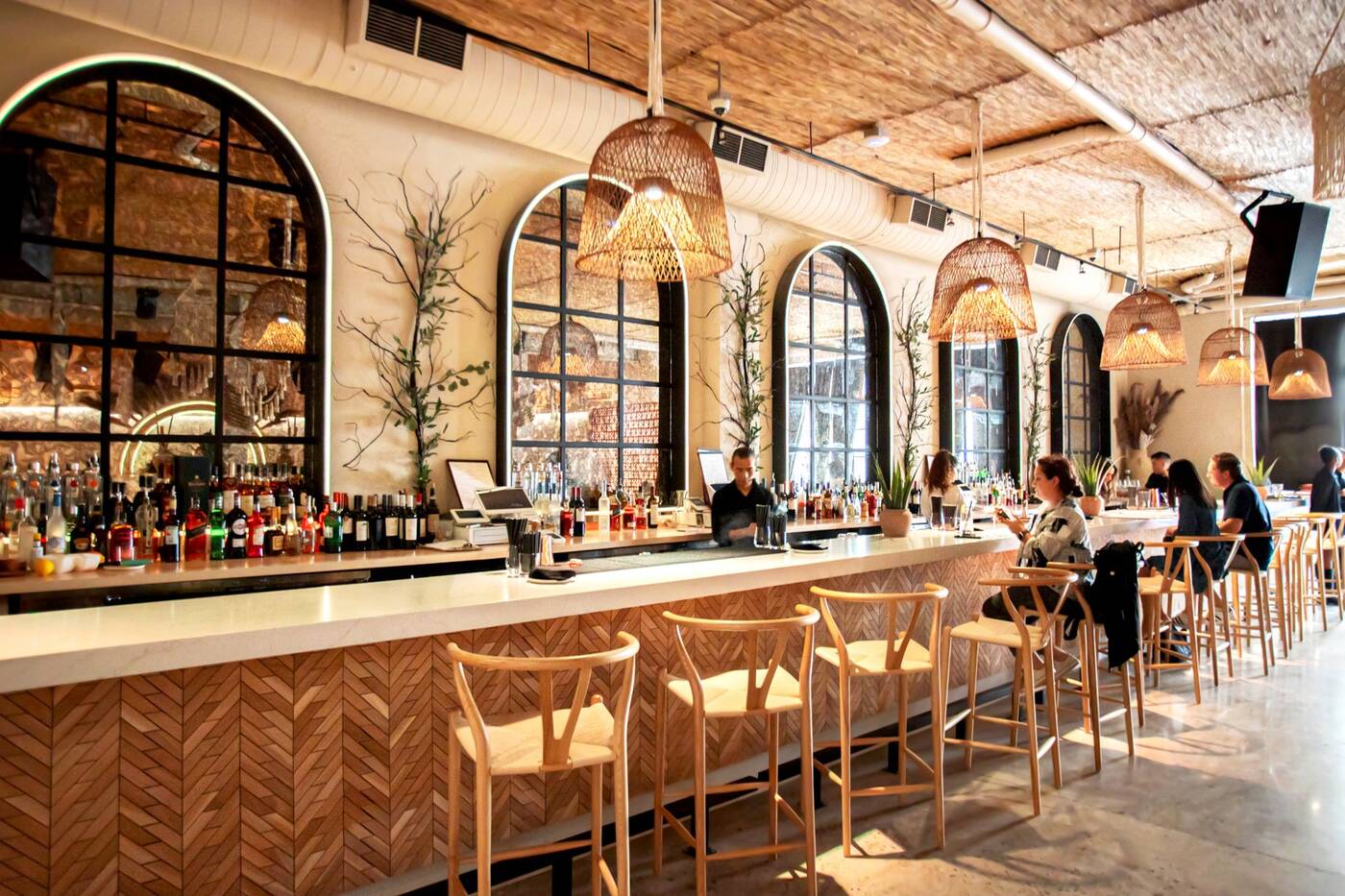 The main bar extends far into the back of the restaurant, with wickered stools and greenery lining beige walls -- it truly feels like you're on vacation when walking inside of here. 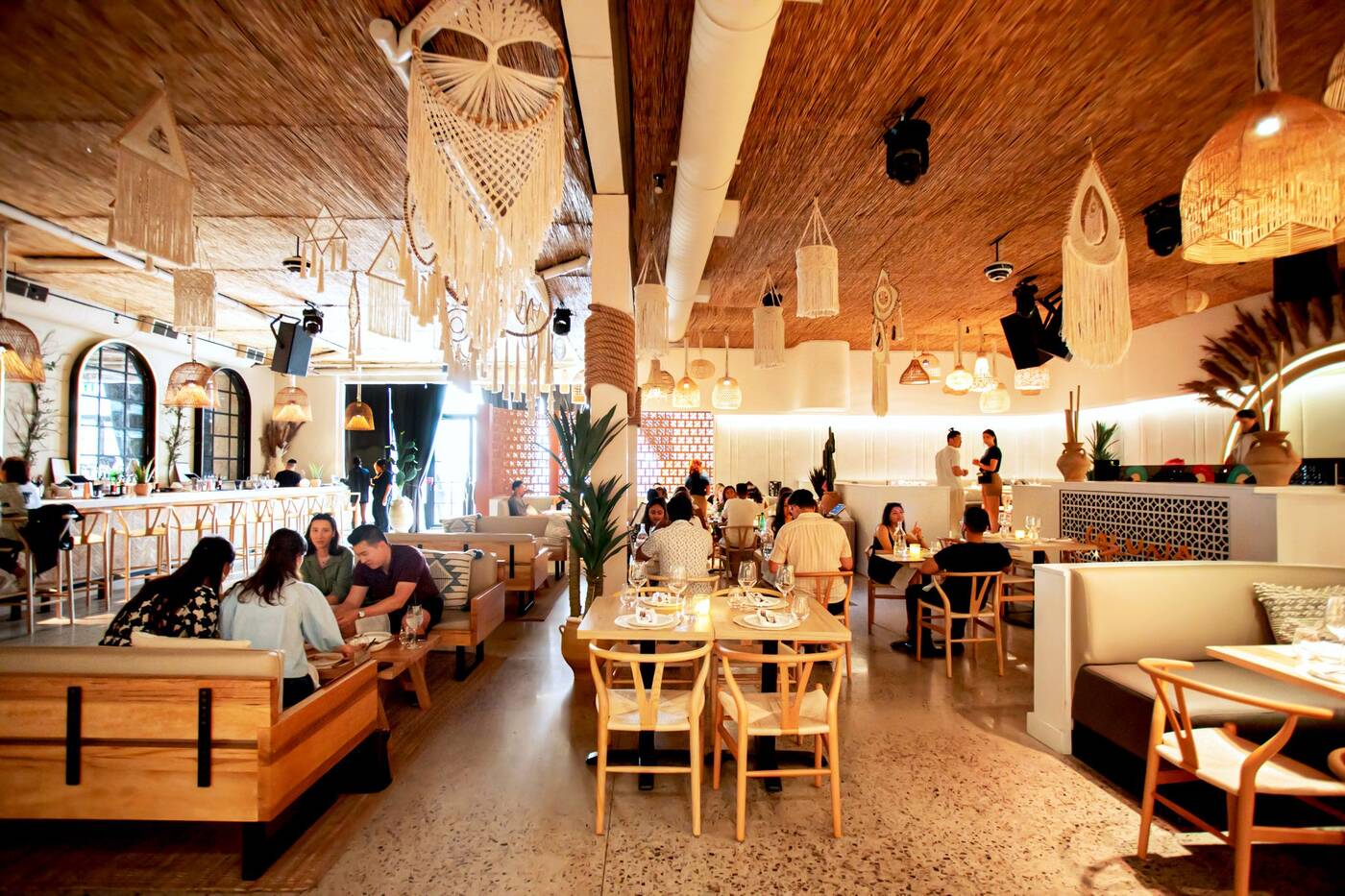 Sounds of Afro and Latin House beats vibrate from the DJ booth that sits near the back, adding to the theme here of Tulum meets Miami. 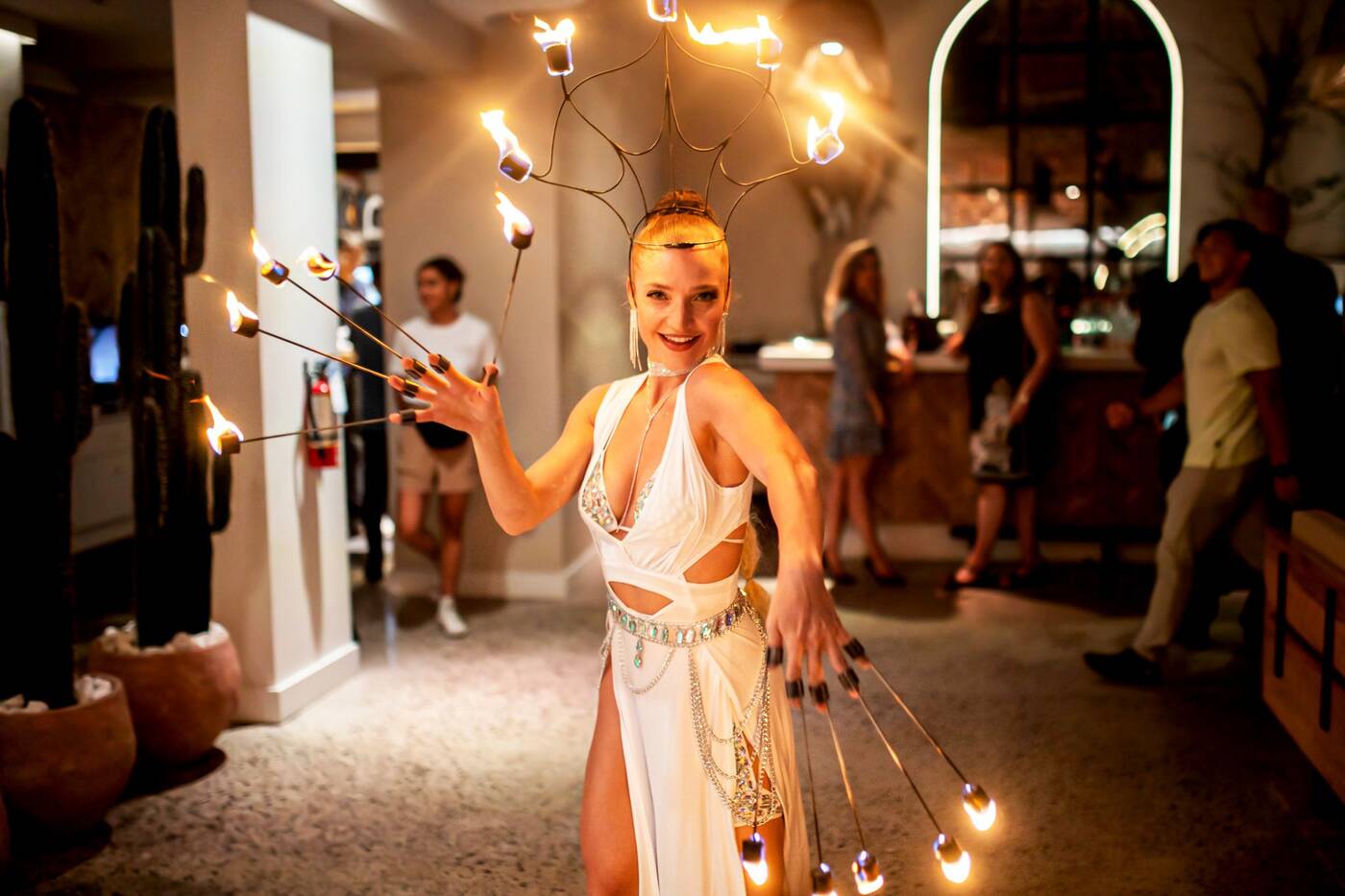 Around 8 or 9 p.m. you can expect more entertainment - in the form of costumed dancers that put on a fire show and will definitely give you and your date something to talk about between bites. 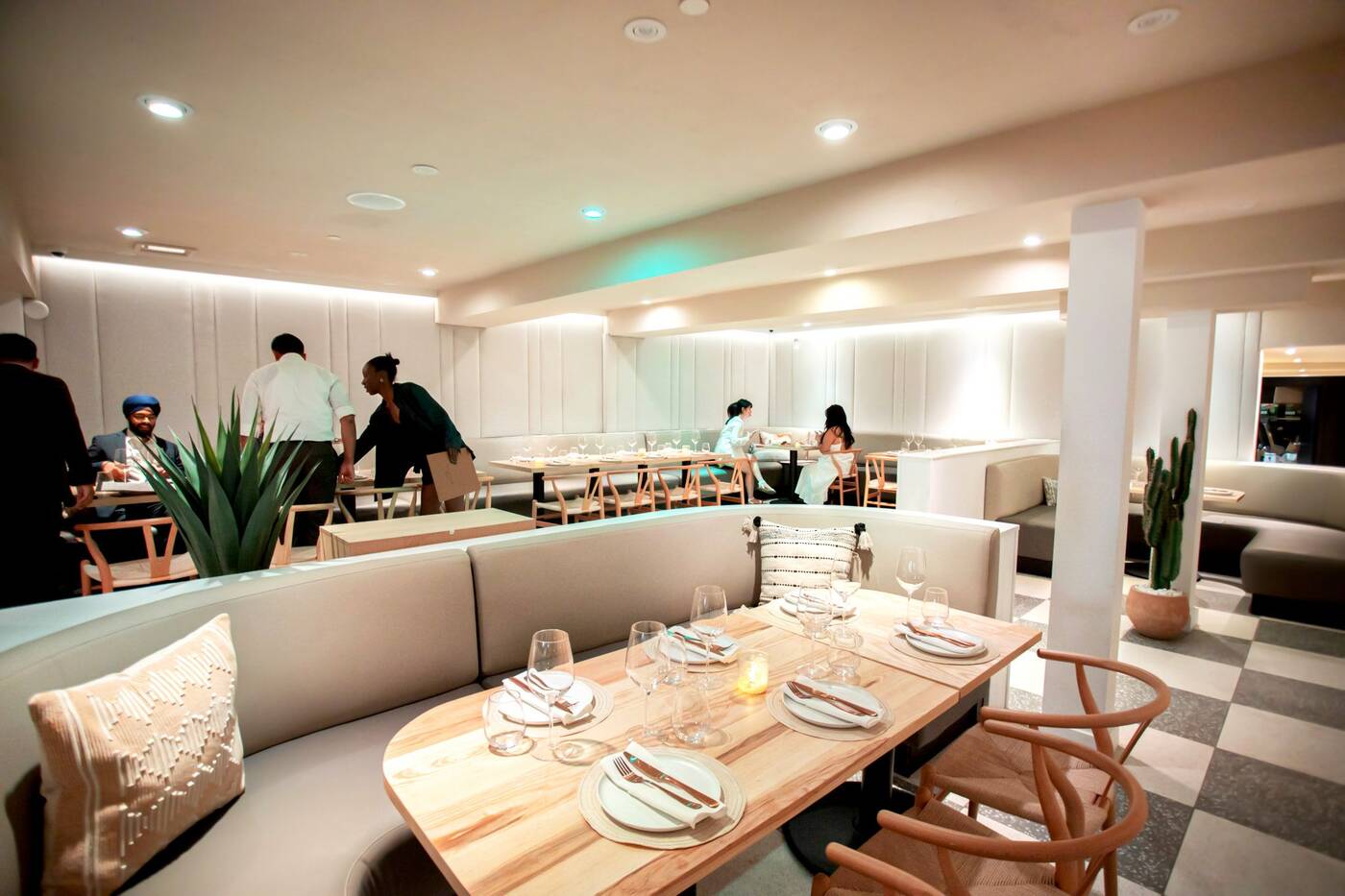 Aside from the theatrics, the general vibe here may seem bougie - but it's honestly just a nice place to visit. A dress code is enforced  (especially on weekends), but as long as you show up looking like you're going out for a nice dinner, you should be good for entry. 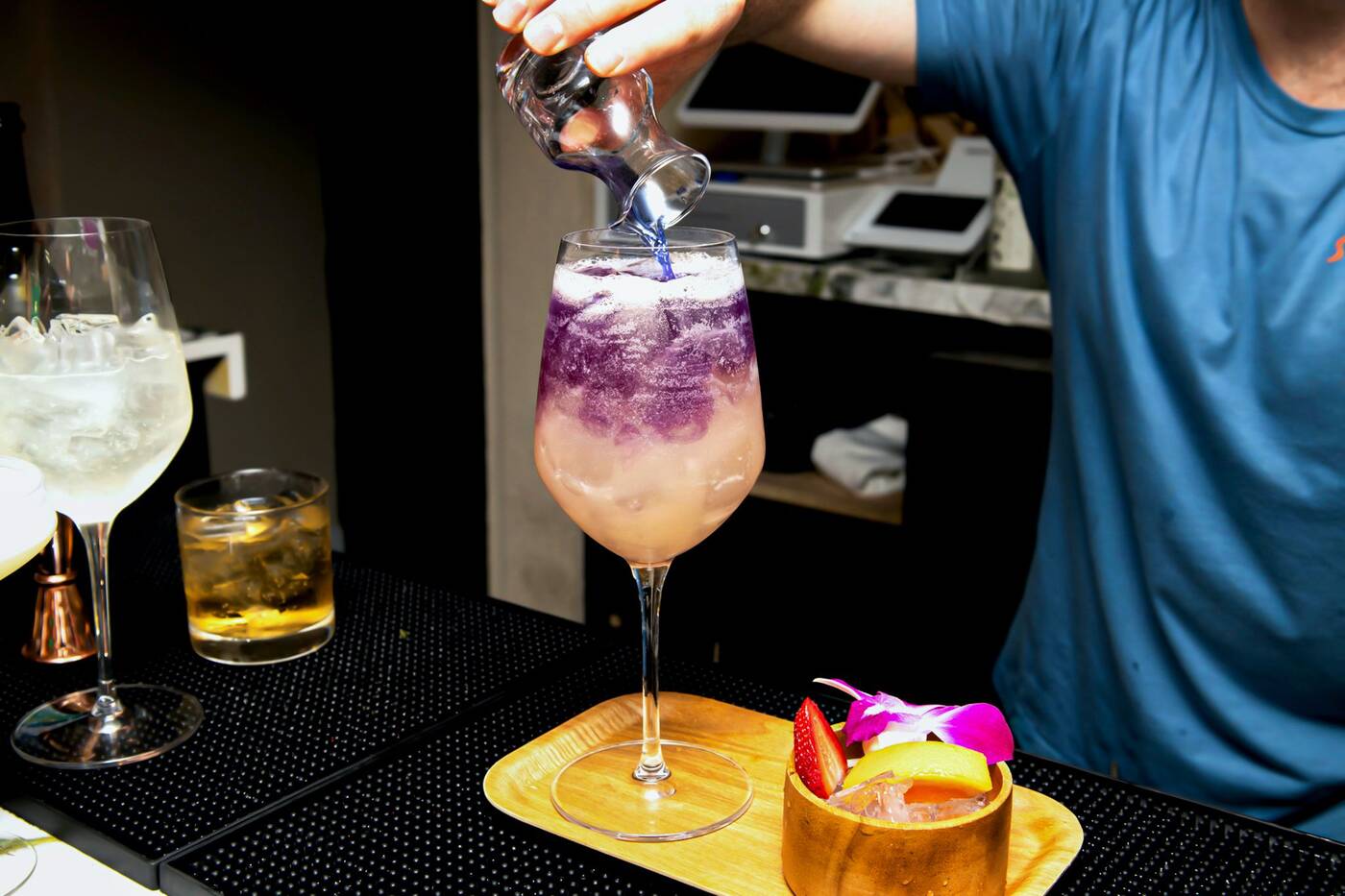 The food at Soluna is best described as a blend of Southeast Asian, Latin American, and Mediterranean flavour profiles. It's on the pricier side, but remember like most places in downtown, you're really paying for the overall dining experience. 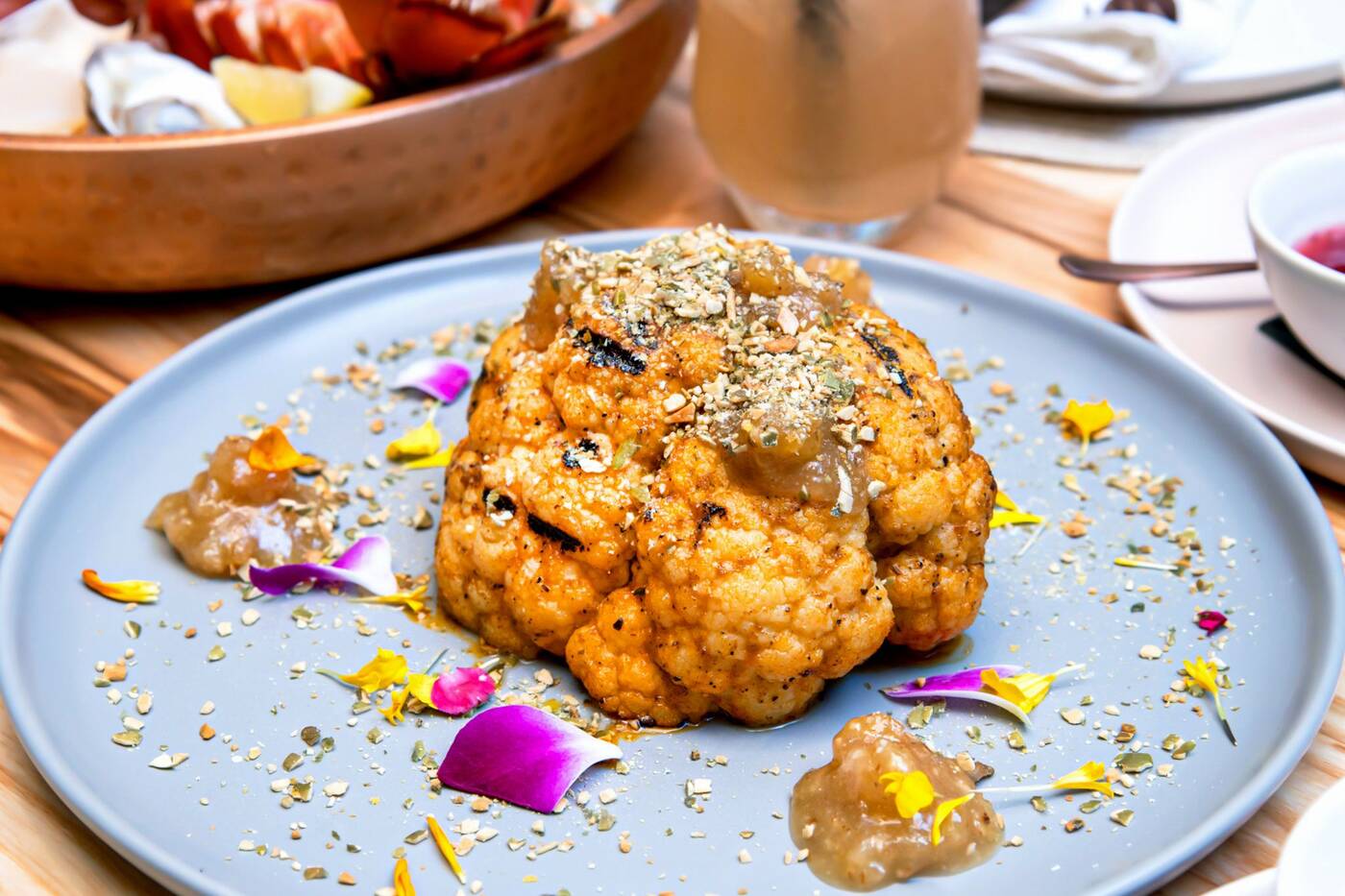 We started off with an order from the Tapas section of Soluna's menu. The Cauliflower ($22.00) is marinated with a harissa spiced paste, then grilled, vegan pumpkin Parmesan cheese is sprinkled on top.

A sweet jelly made with golden mezcal raisins is garnished on separate areas of the plate. 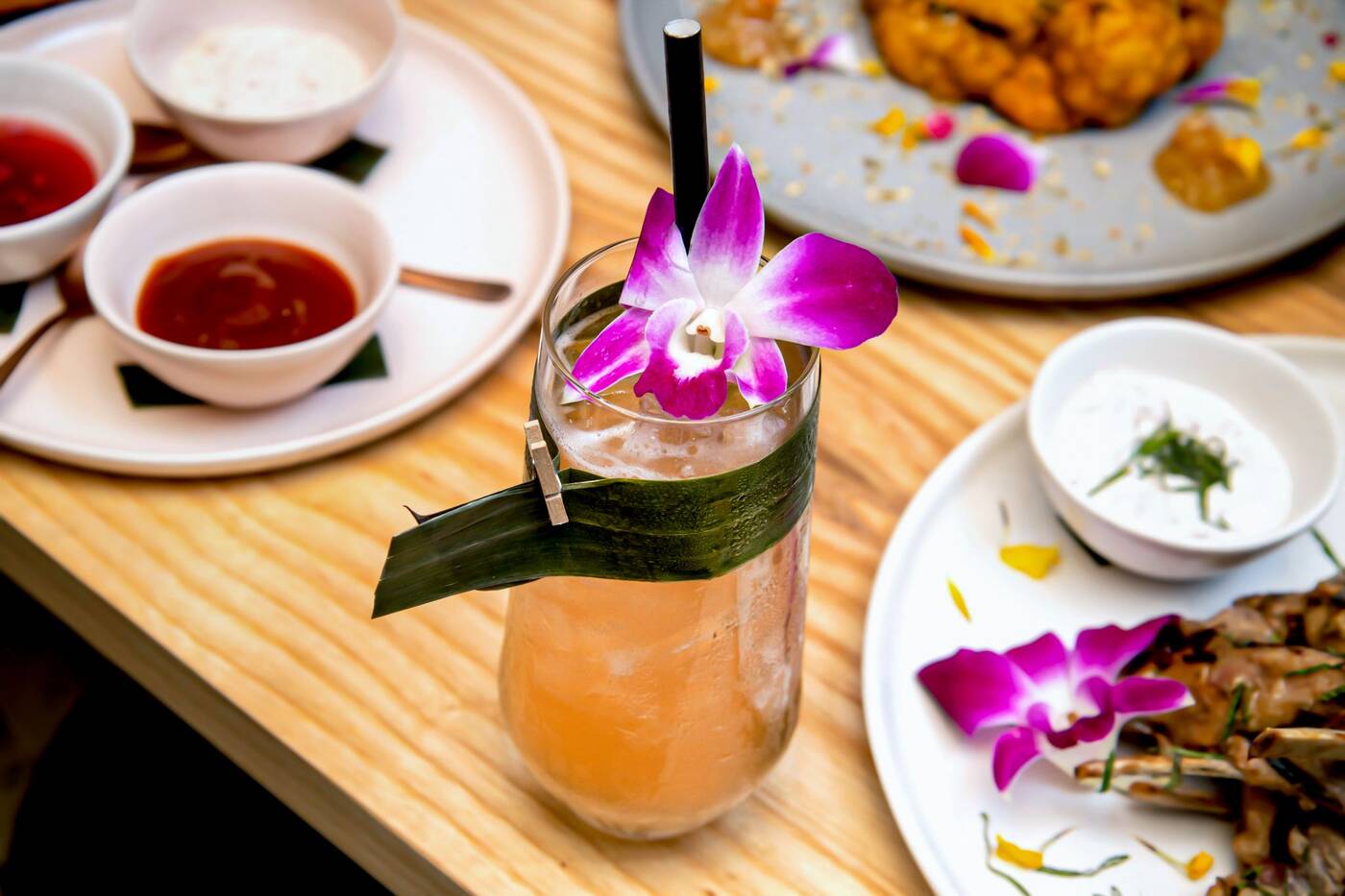 The Bamboo ($18.00) is an ode to the old nightclub that used to live where Soluna is now. Schochu is the base for this drink, a Japanese distilled liquor, that mixes with watermelon, lychee, jasmine tea and lemon.

Very light in flavour and the orchid flower on top makes for an Instagrammable moment. 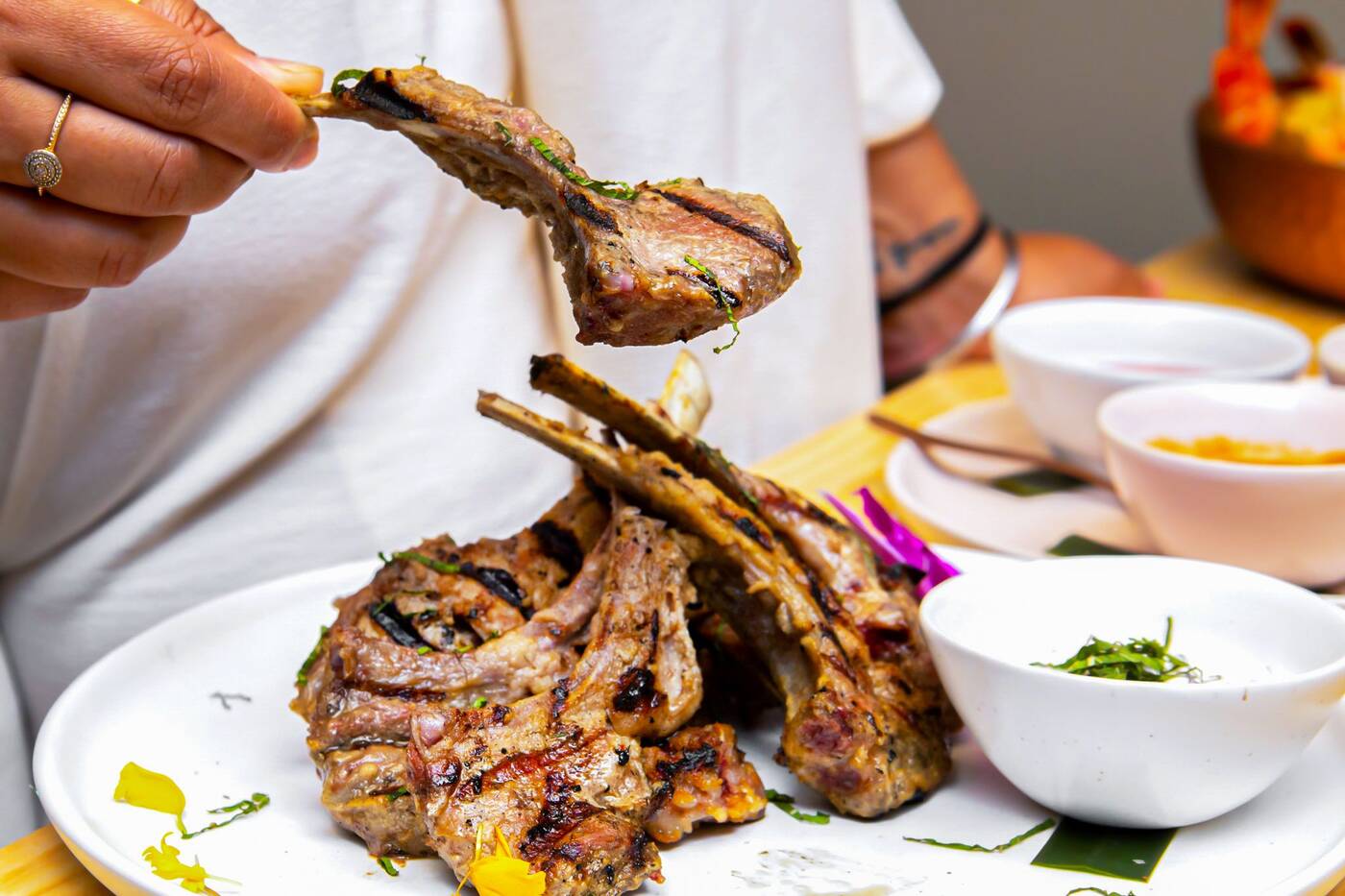 Lamb chops were deliciously grilled on top, however do expect the bottom to be cooked on the rare side. Soft and juicy, this lamb meat from New Zealand are $38 for half rack (4 pieces) and $70 for full (8 pieces).

It comes with a serving of tzatziki on the side along with a sprinkling of olives. 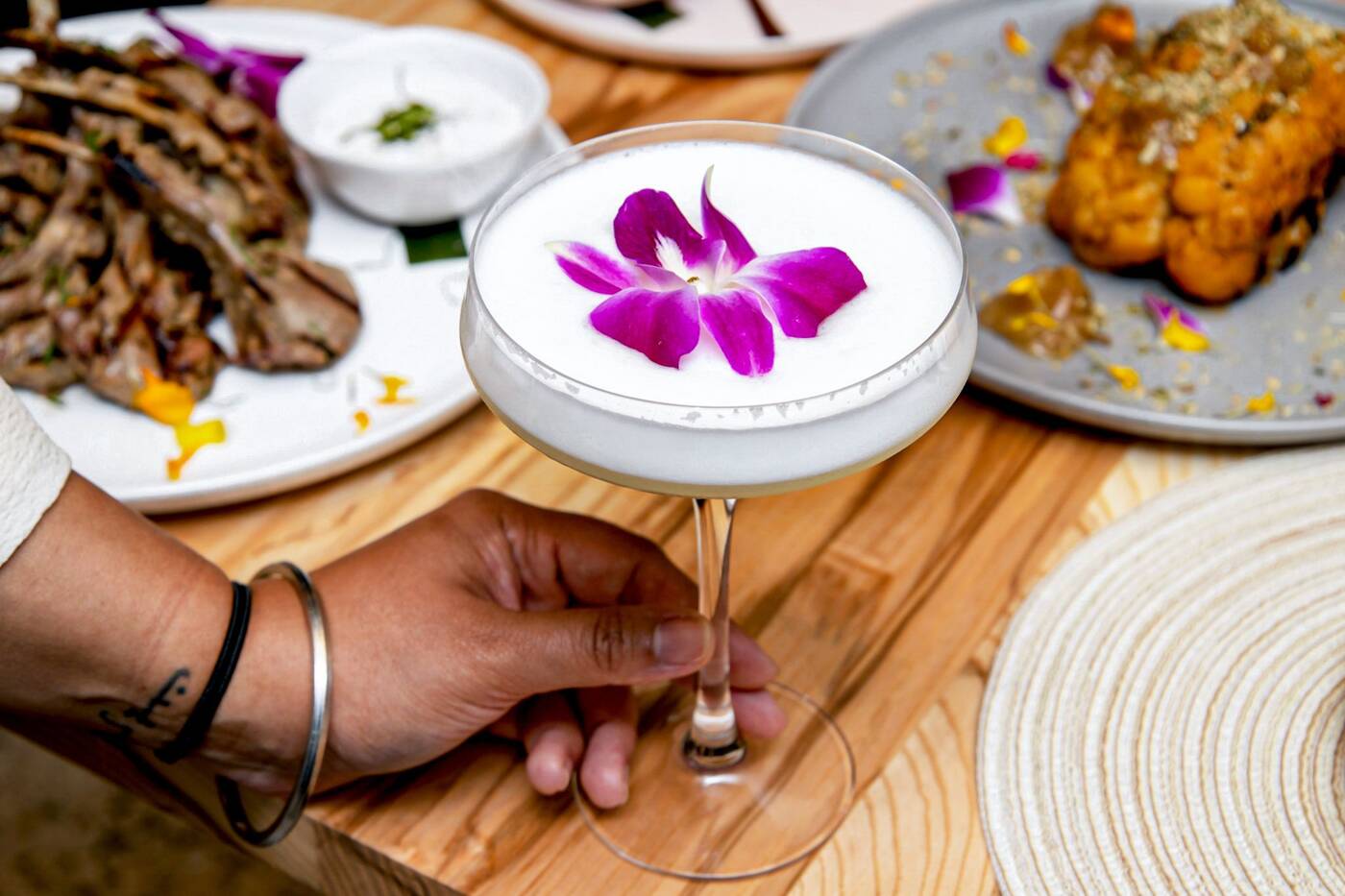 The Flower Child ($20.00) looks like it belongs in a museum. Grey Goose is shaken with St. Germain, egg whites, pineapple, lemon and lychee.

Fruity, but still maintains a strength to it -- you can also eat the edible flower that's used as a garnish on top. 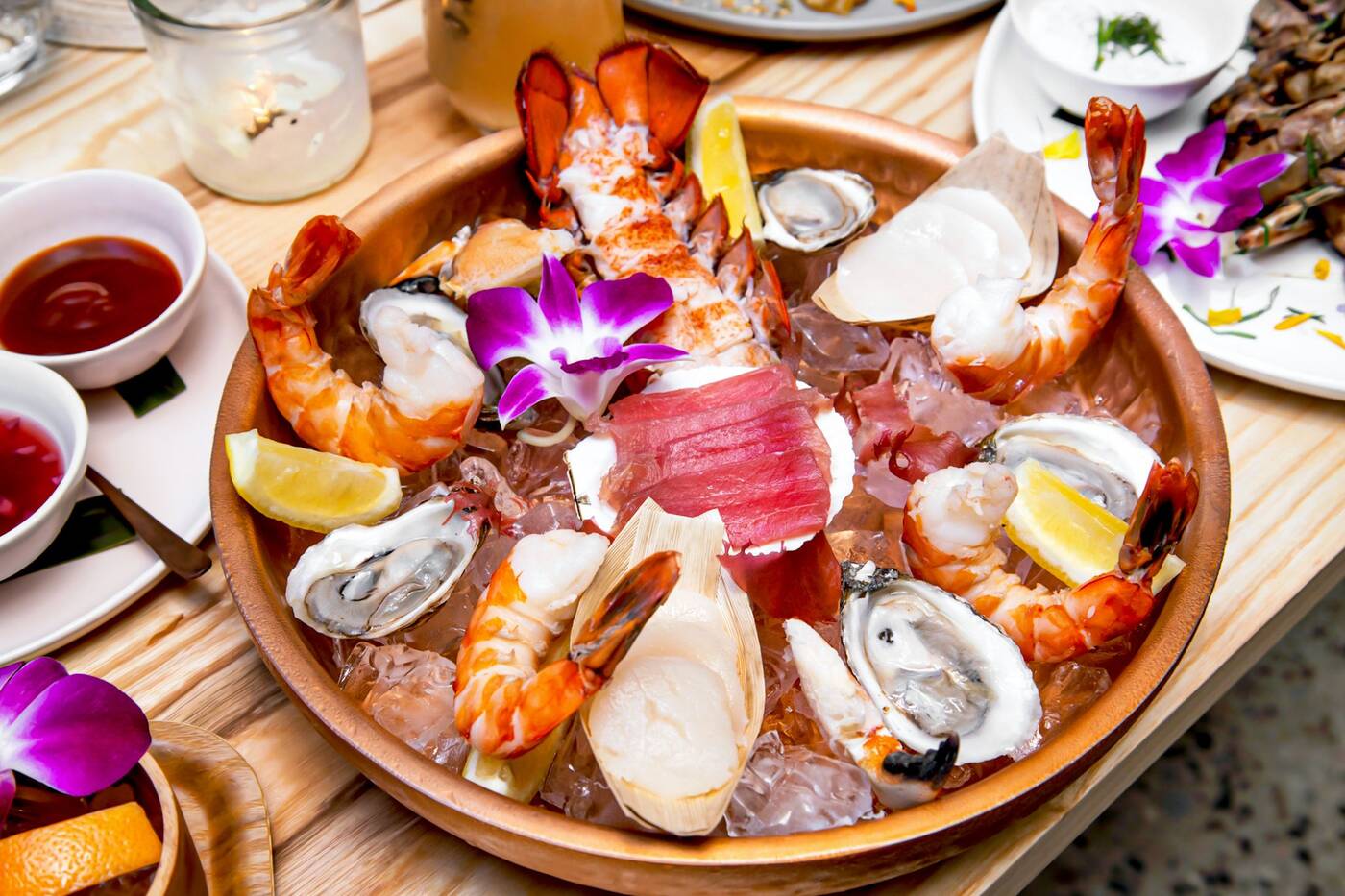 From the Raw Bar section of the menu comes the Seafood Tower ($295), and although it doesn't look like a skyscraper here, we opted for the half-size ($165) instead.

An arrangement of all your seafood favourites is included on this platter: fresh lobster tails, shrimps, prawns, scallops, and crab claws. 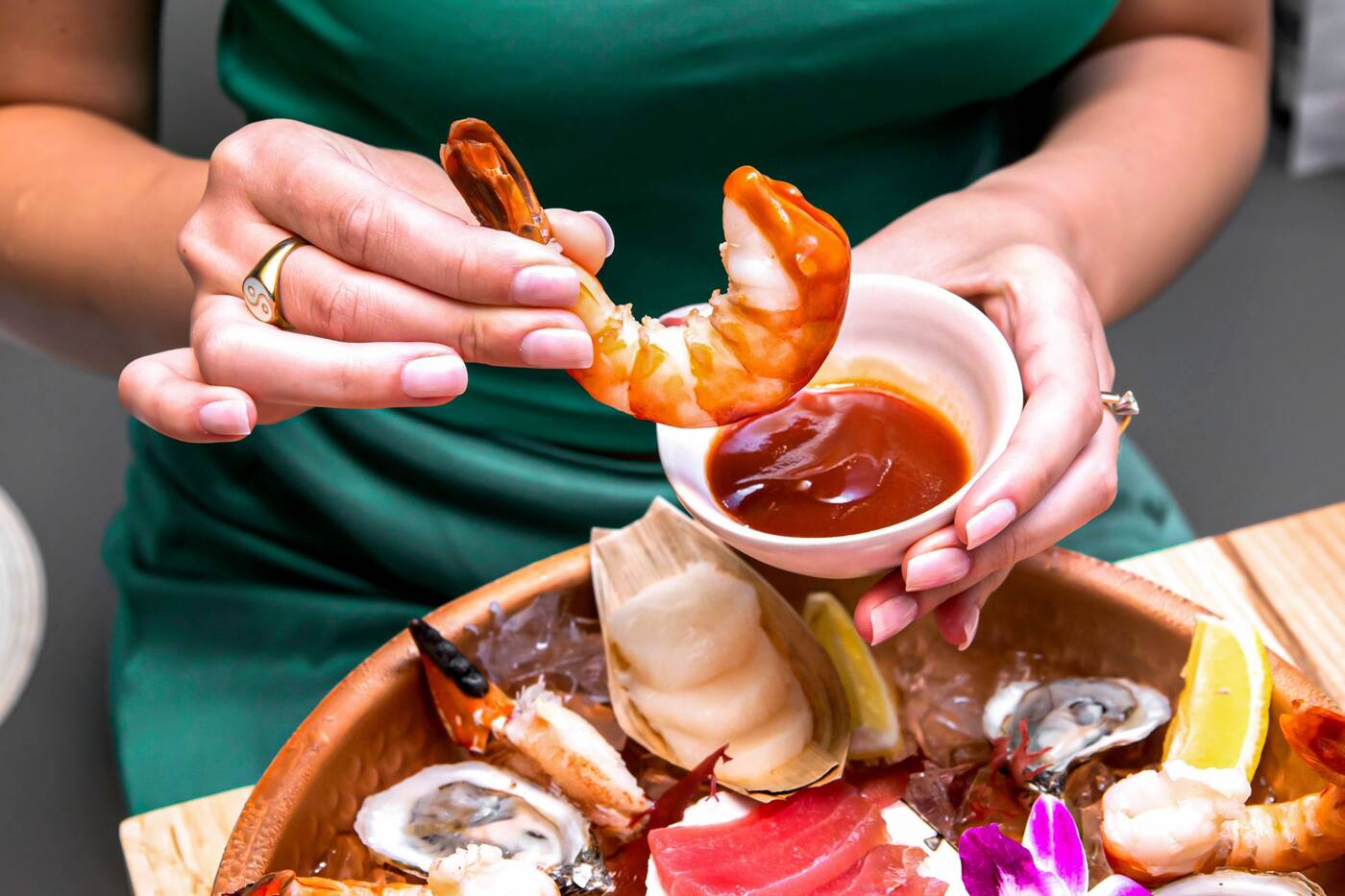 It doesn't get any better than cocktail sauce and a mignonette tartar that's served on the side, dip to your heart's desire with this dish that definitely matches the seaside feels of Soluna. 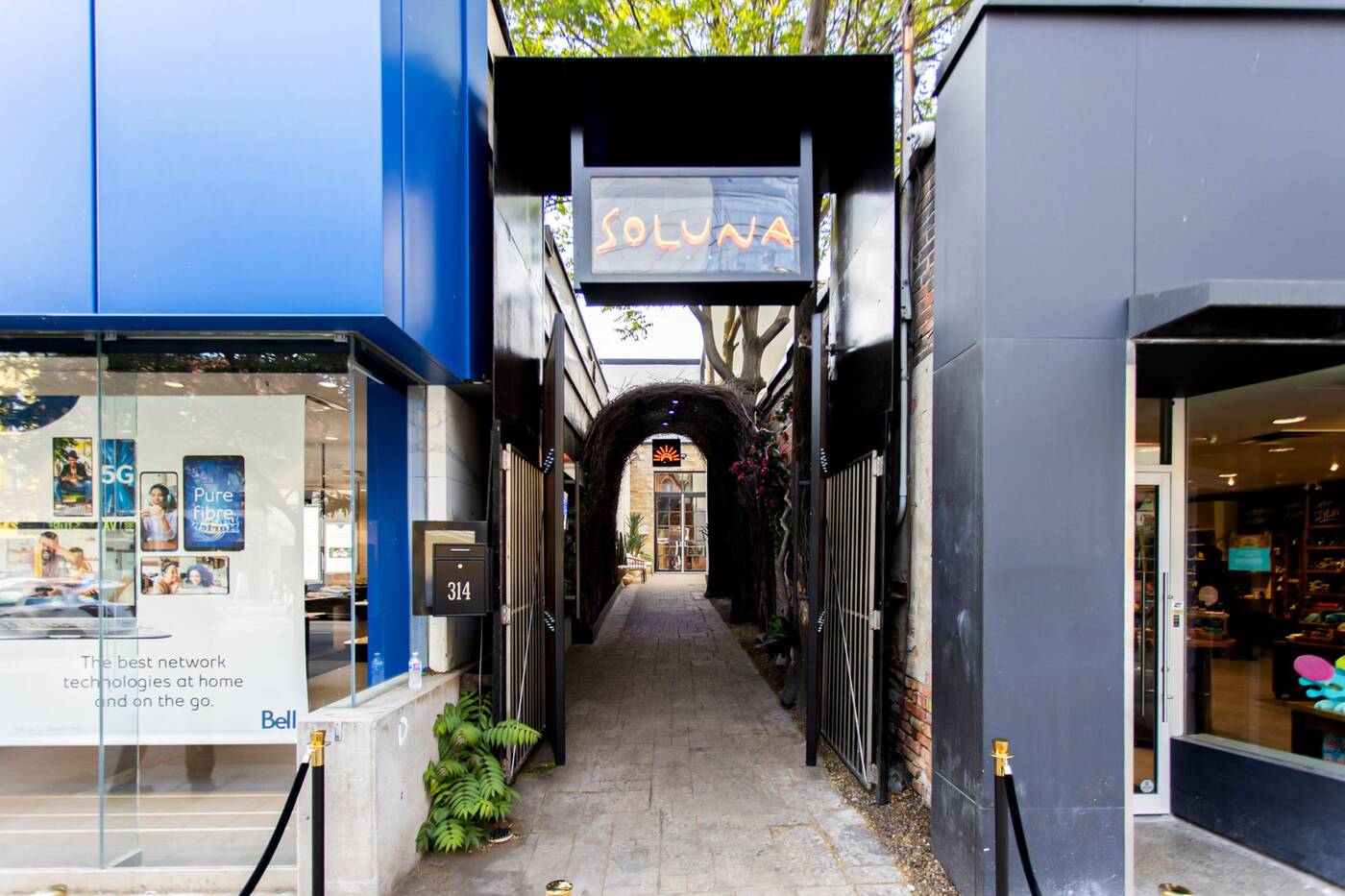 The grand lead up entrance into Soluna remains the same from the days of Cube. A rooftop patio is set to open on top of the restaurant this month, with more of a casual after-work drinks feel.