Randy’s Roti has made a name for itself as one of the premier food trucks in Toronto to get your West Indian food fix.

With their first brick and mortar spot open just steps away from Bloor station, you can order their delicious doubles in a restaurant with actual seating. 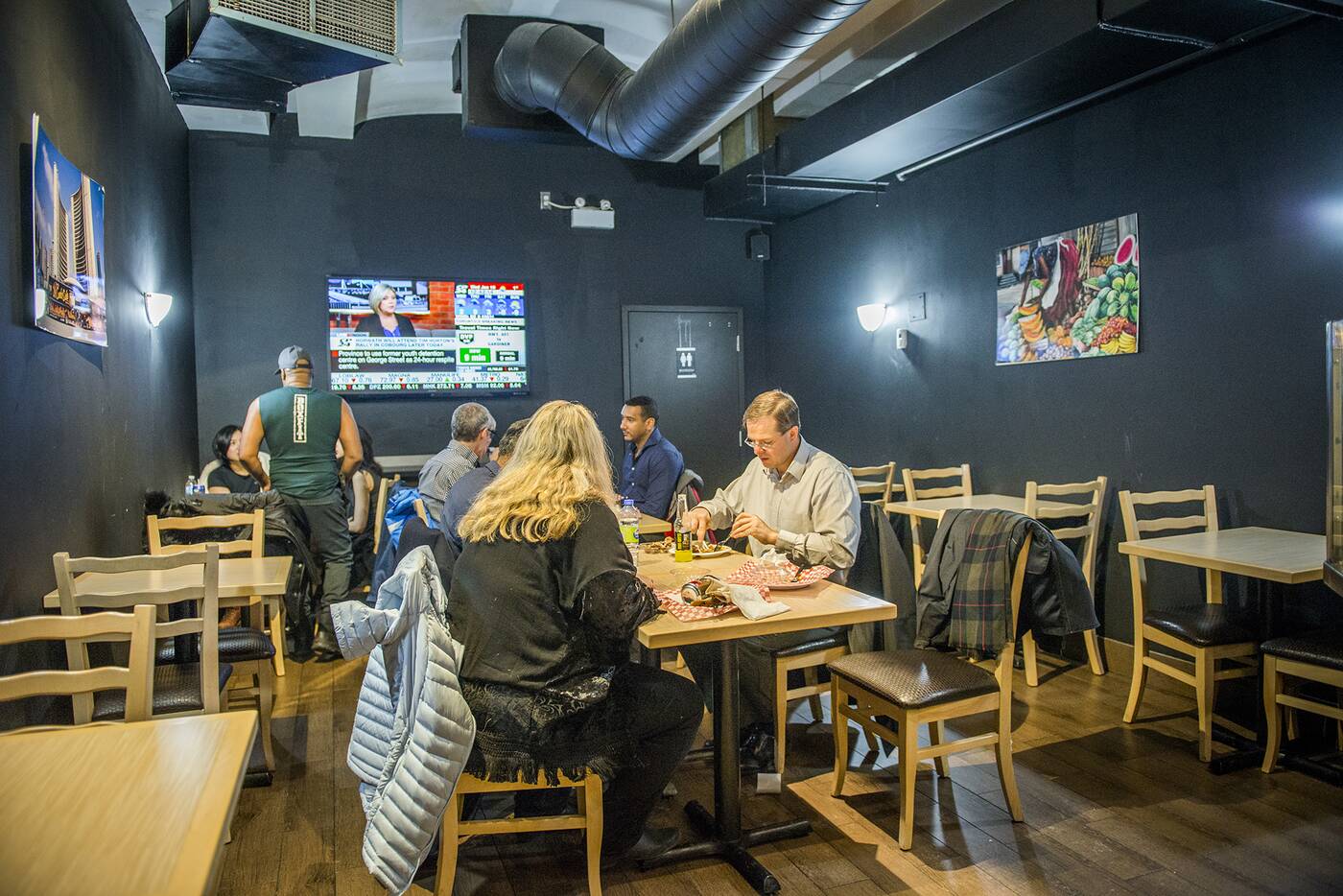 It gets busy at this little restaurant during lunch, propelled maybe by customers who recognize Randy’s brand from events like the ROM’s Friday Night Live. 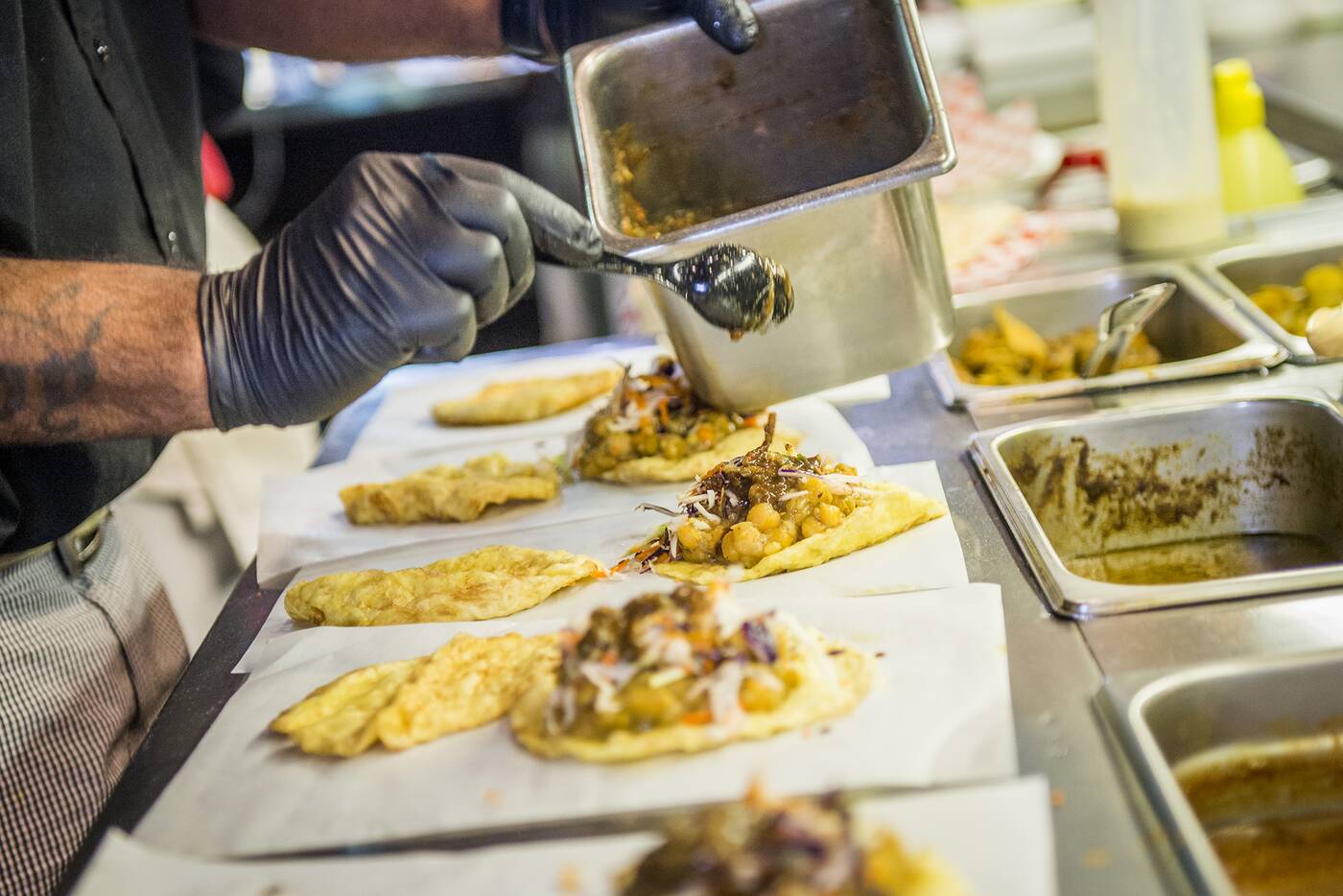 Owner Randy Kangal still has two operating food trucks that serve the GTA and Mississauga, but his expansion from curbside to storefront has appeared pretty seamless. 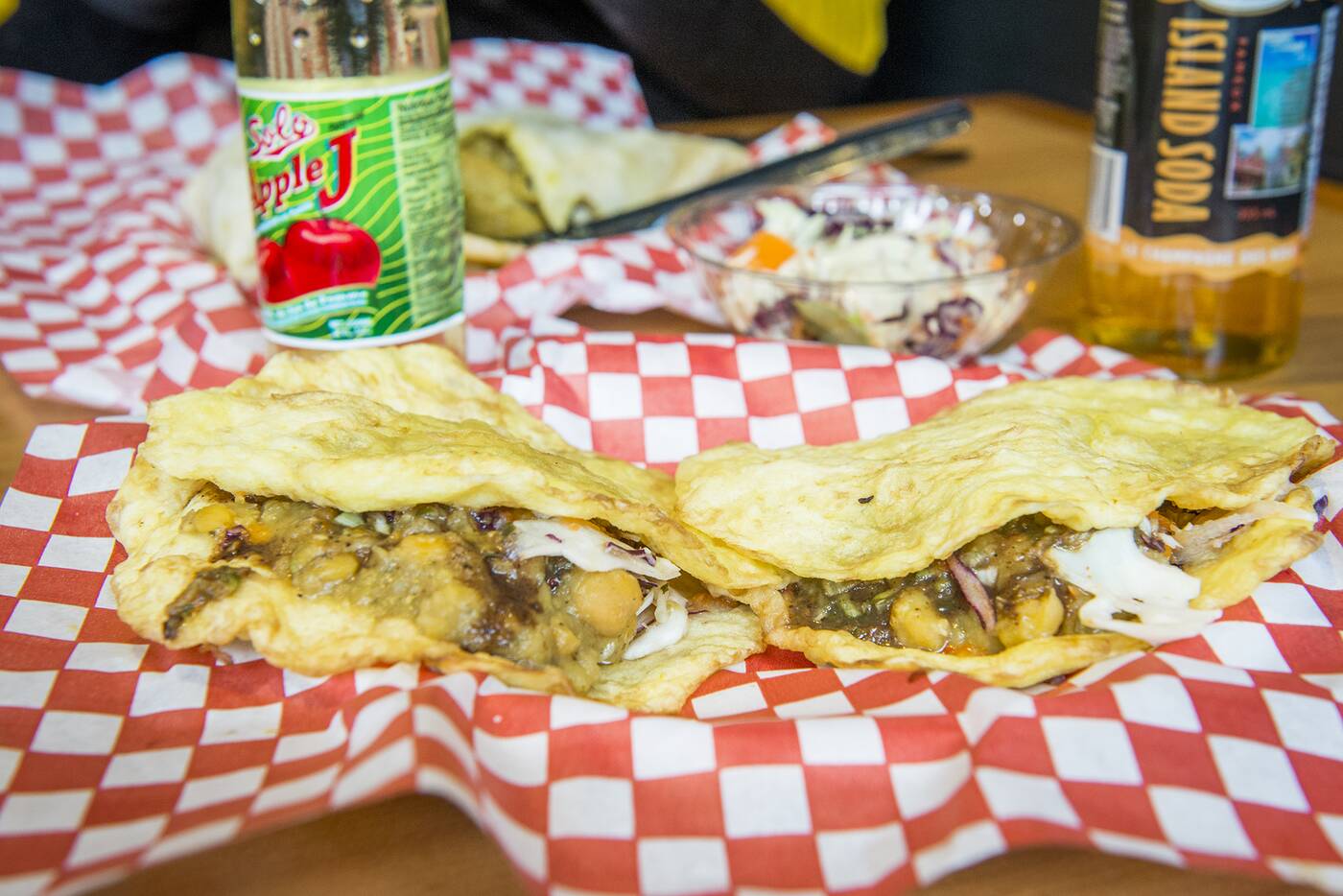 The main bite-sized attractions here are the doubles (2 for $5), which are vegan and come with a side of salad. With a nice blend of chickpeas and mango chutney, coleslaw, and chadon beni – a cilantro-esque sauce – I found the doubles just the right size and flavour. 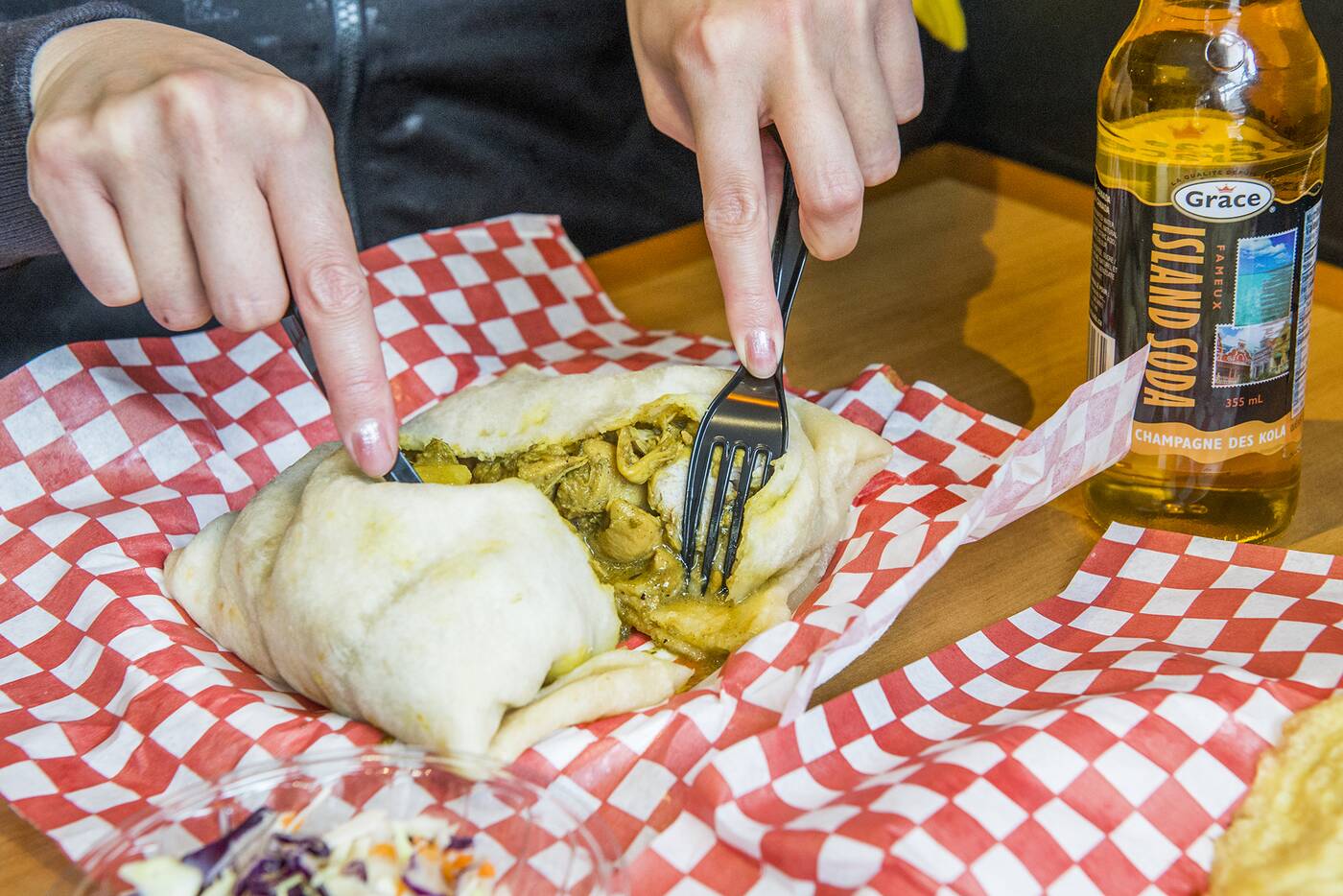 Another popular order is the fluffy chicken roti ($8.99 for medium). I liked that it wasn’t overly saucy and that the chicken meat and potatoes were cooked to a firm texture, which helped keep the roti intact.

All of Randy's rotis are boneless and made fresh in-house. They also have goat and beef rotis ($8.99 each) and shrimp roti ($8.99) for seafood fans. 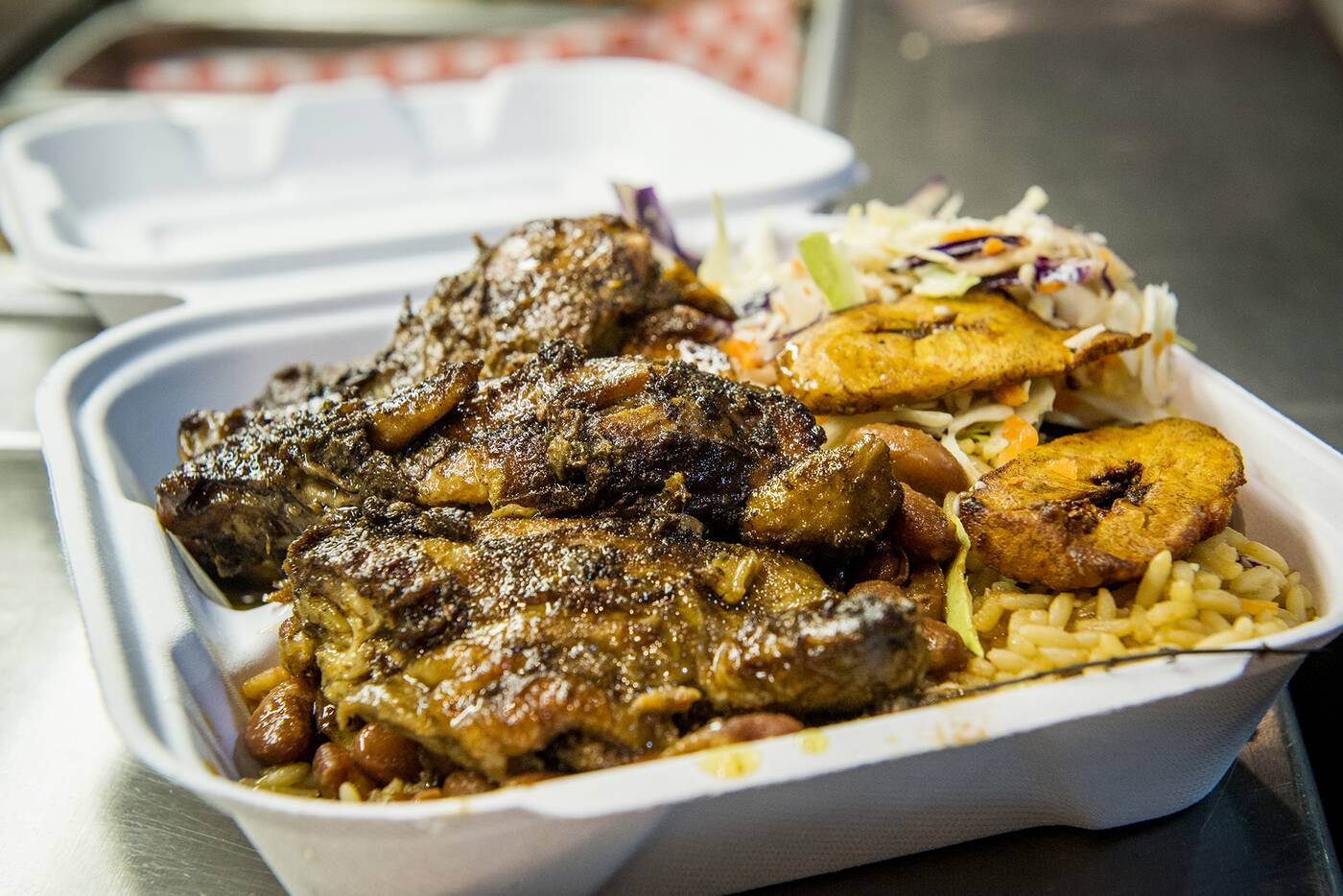 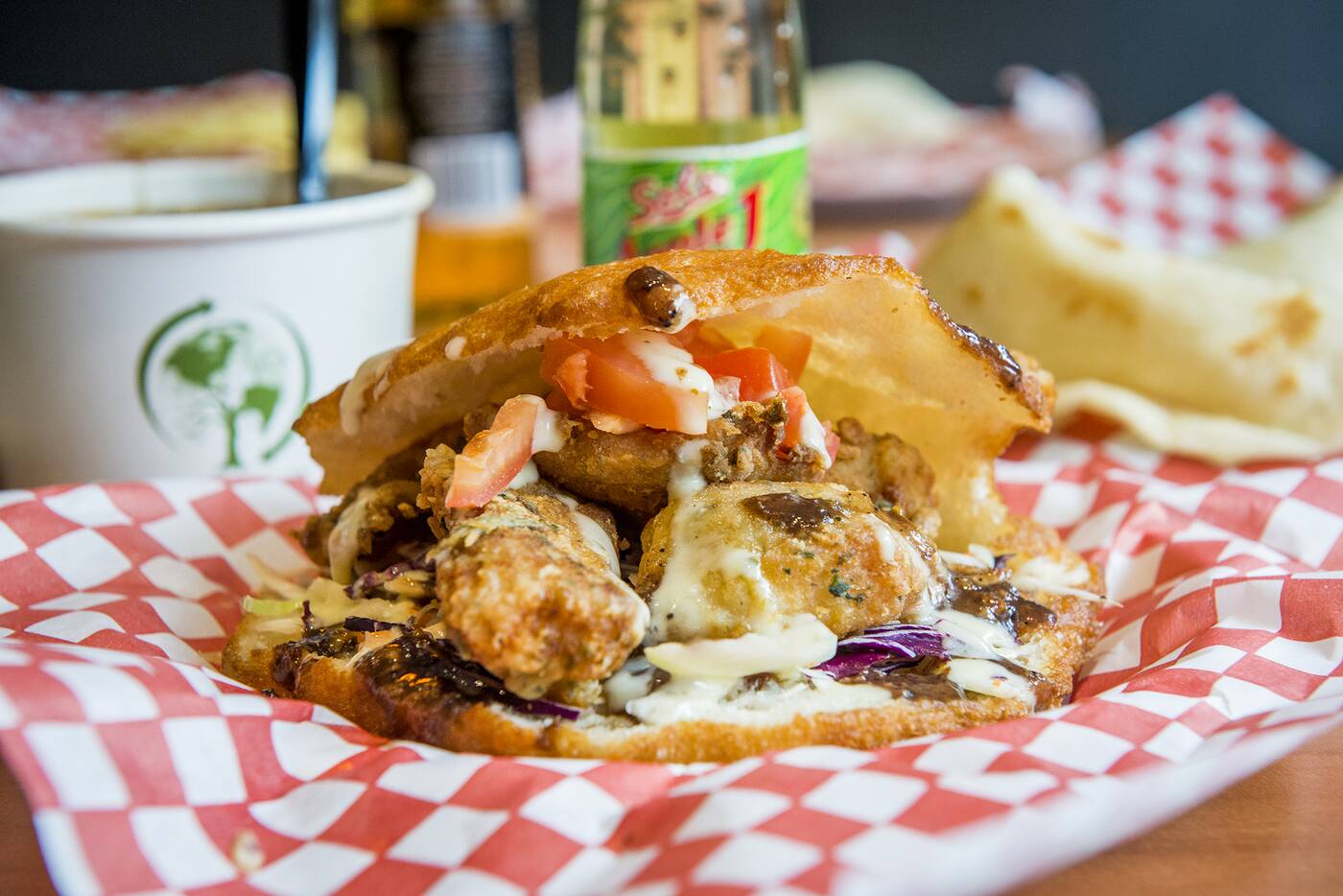 For a meal that's one-of-a-kind, Randy’s serves the traditional West Indian dish, bake and shark ($9.99): a sandwich that originated as Trinidadian beachside fare and has a contentious reputation amongst conservationists for its use of shark meat. 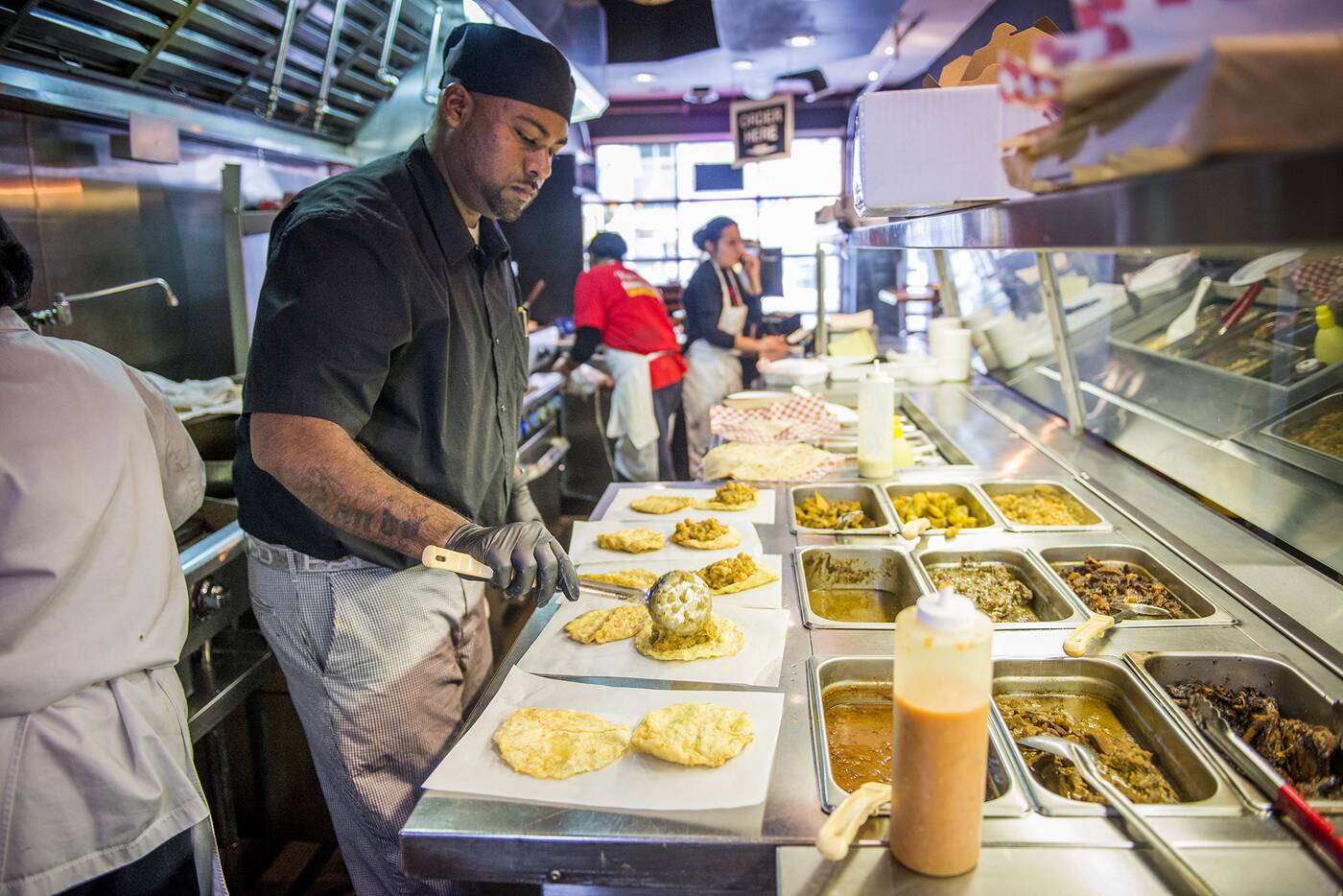 Randy says his meat is sourced from farm-grown sharks; you can also get your sandwich with cod meat instead. I found the thick deep-fried bread really sweet and juicy, and the shark filet was perfectly crispy. 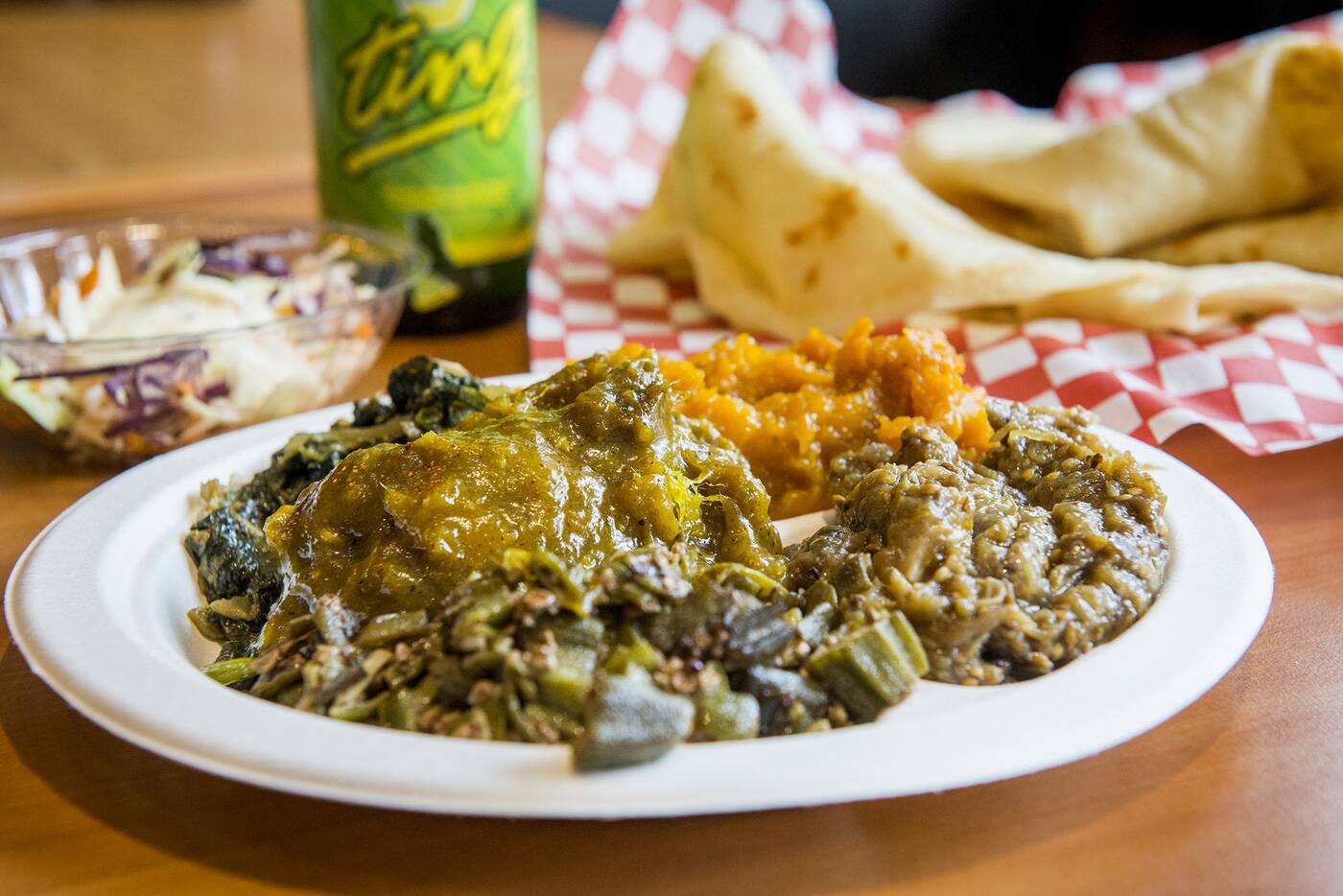 Vegan options are bountiful here and most dishes are dairy and allergen free. The veggie plate ($14.99 for a large) comes with salad and allows you to choose three veggies from a list of vegetable melanges. 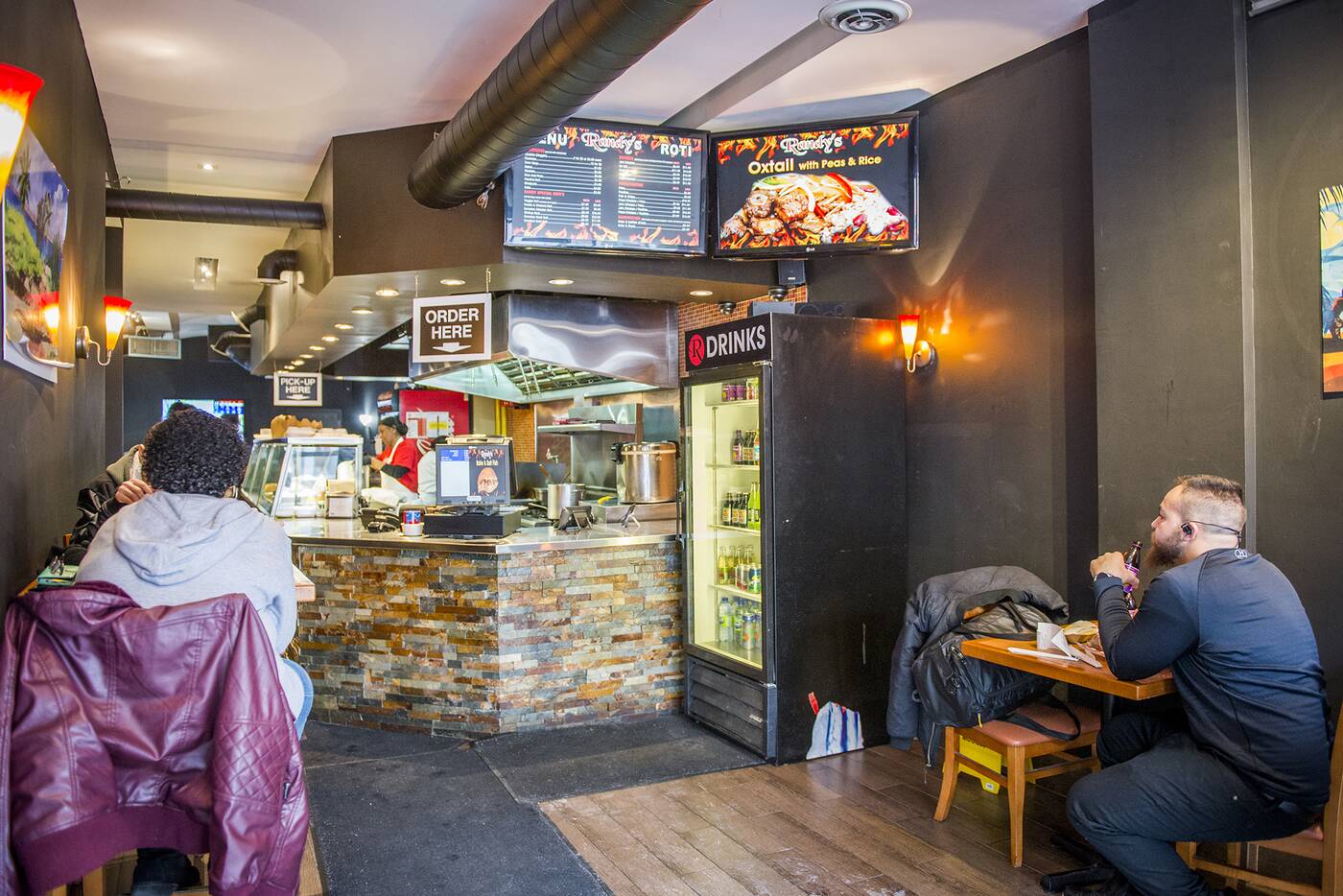 I highly recommend getting the spinach and curry mango options, paired with some sweet pumpkin or channa. 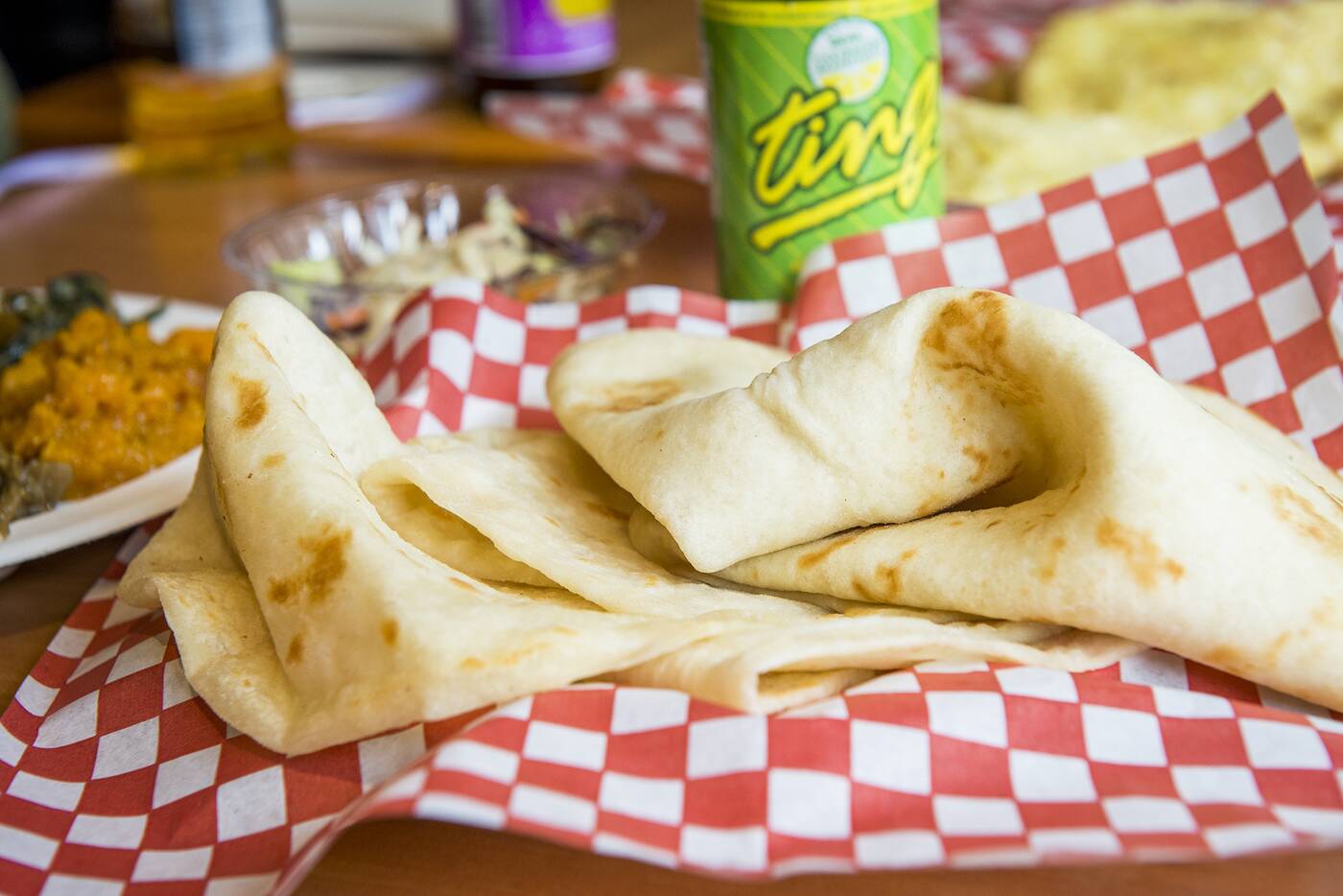 You can order the plate with a side of rotis ($4) to absorb any excess sauce, but be wary of an unexpected kick when ordering the eggplant: it's significantly spicier than the other veggies. 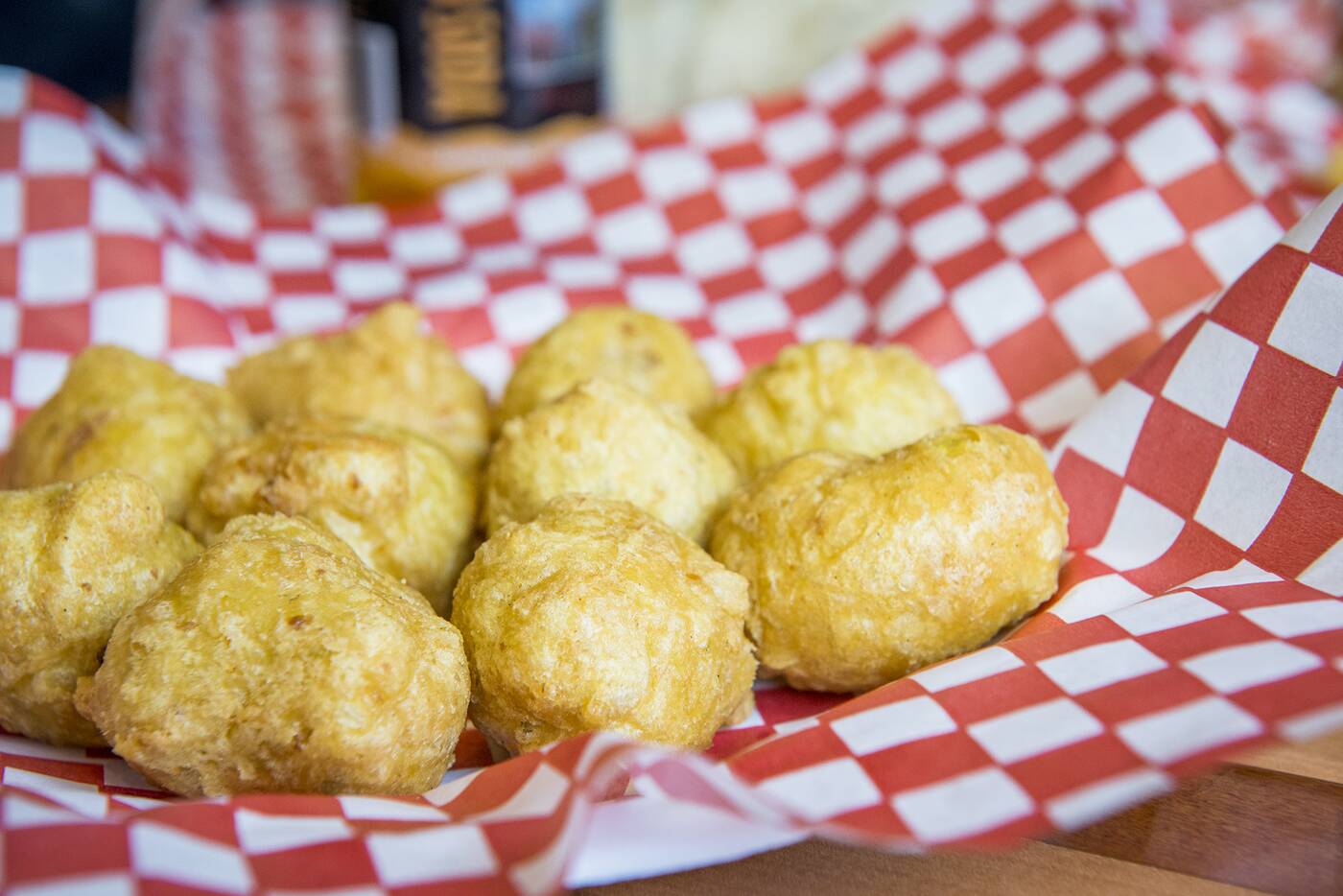 Poulories ($5 for 12) are savoury, Timbit-sized balls made of a thick split pea and chickpea mixture that work well as a filling side and come with a zesty tamarind sauce for dipping. 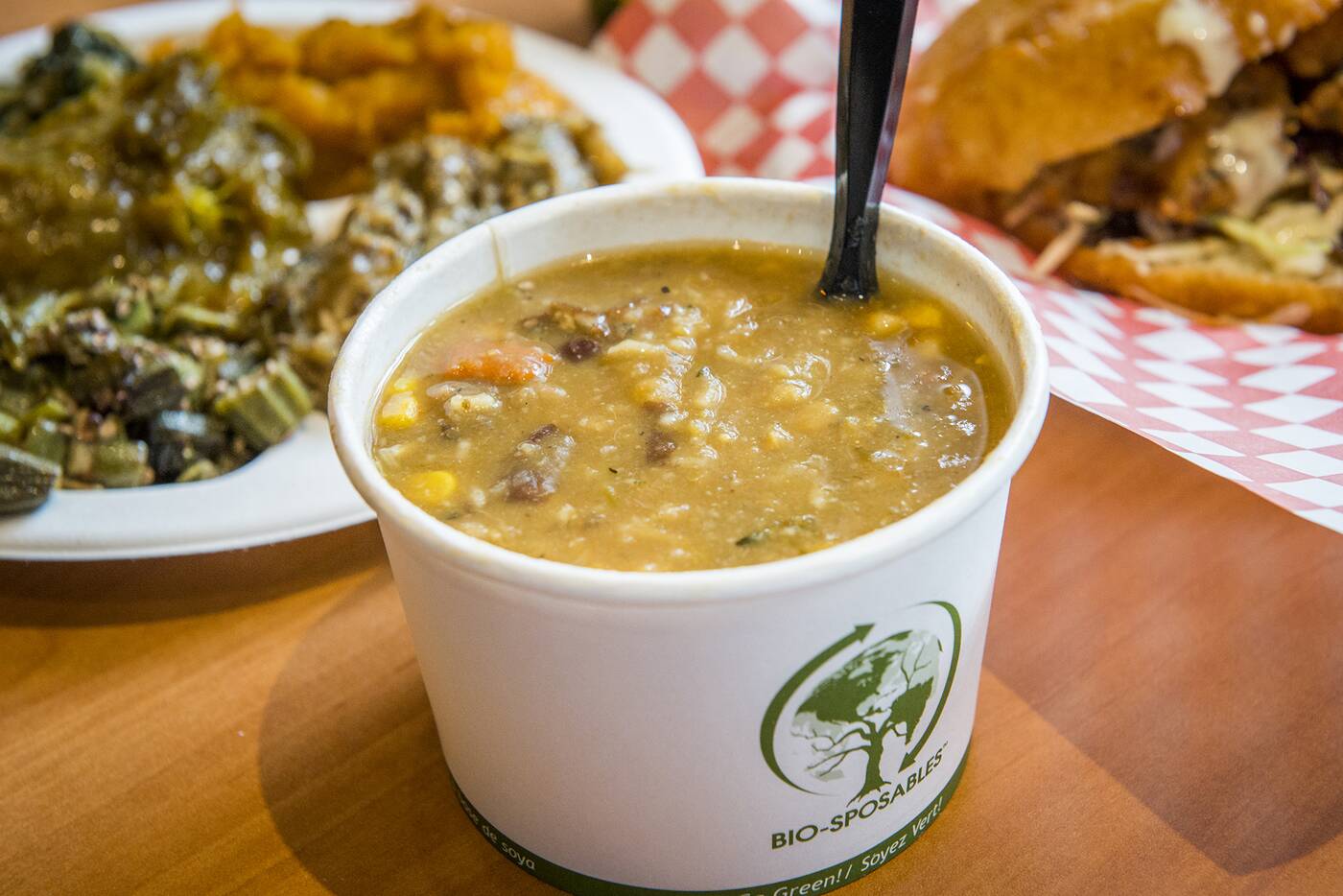 As for the corn soup, I found the small to medium-sized container ($7) a tad expensive for its size although I enjoyed its grainy texture.

For fans of popular Caribbean soda, you’ll be pleased to find a solid selection of drinks in Randy’s fridge: this food truck-turned-joint get points for having Apple J, Peardrax, and Ting on deck. 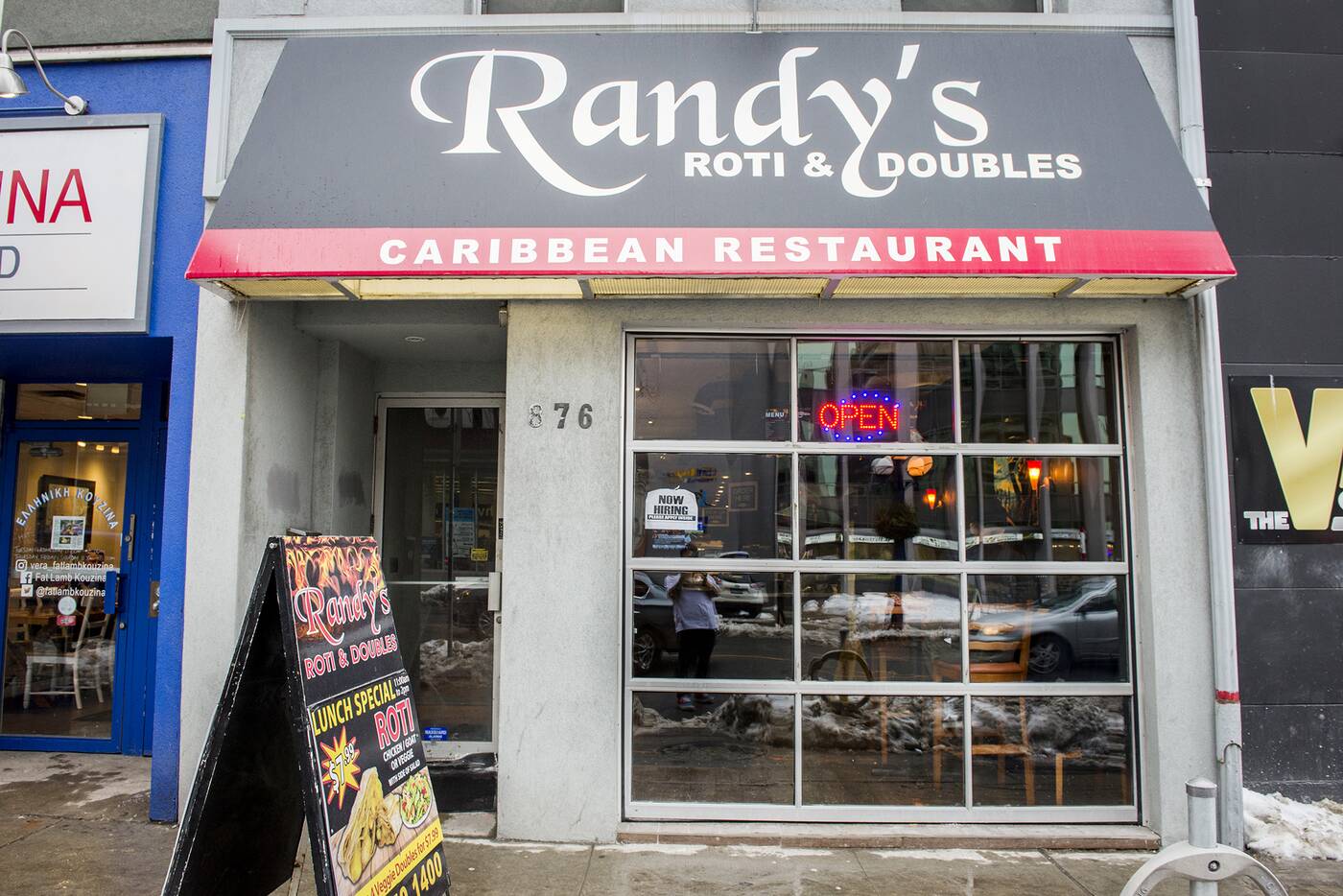