Rhum Corner, the latest offering from Toronto restaurateur Jen Agg (of the Black Hoof ), feels like a Caribbean dive bar minus the stray dogs running around. Dimly lighting, checkered floors, and a Haitian wall mural set a casual vibe. But the most important element of design is undoubtedly the library of obscure rum hanging on the bar wall. One thing's certain: you won't be finding most of these at your local LCBO. 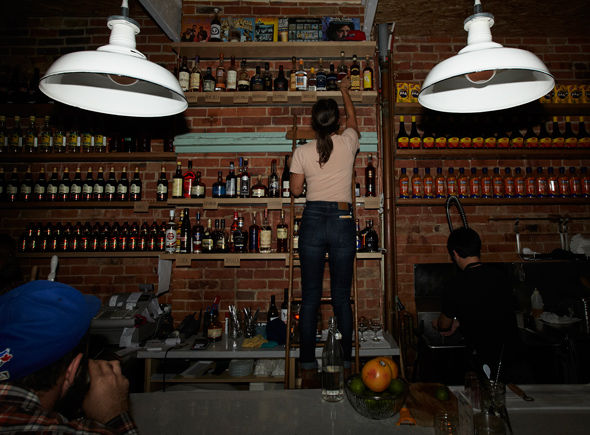 But what about the food? That can wait for a moment, because when you have an owner who also runs the popular Cocktail Bar across the street, it's a sure thing that she knows a thing or two about perfectly concocted hooch. Take, for instance, the Dark and Stormy ($9), which is more like a light and breezy thanks to its lighter hue and sweetness. Nonetheless, this drink will taste unlike any version you've had before. 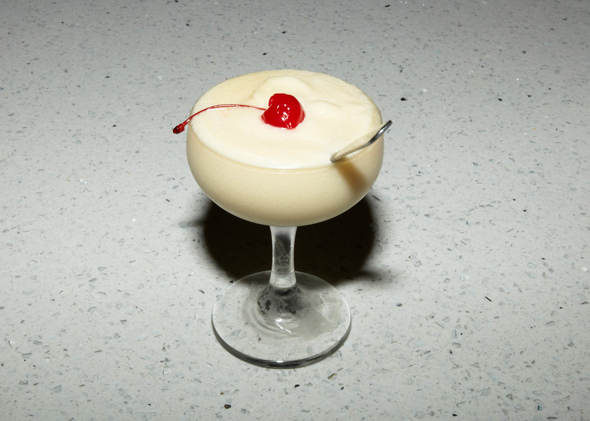 Then there's the Pina Colada ($8) that comes out of a slushy machine reminiscent of a shitty all-inclusive resort you've visited in the past. The only difference here is it doesn't taste shitty, but is down right addictive. Just don't drink too fast or you might end up with brain freeze like I did.

But the drink that takes the cake is undoubtedly the Fresco ($8), which the menu declares is a Haitian treat. This simple concoction is beyond just fresh, it's downright glorious and only consists of rum and housemade fruit syrup poured over perfectly shaved ice in an old-school copper mug. 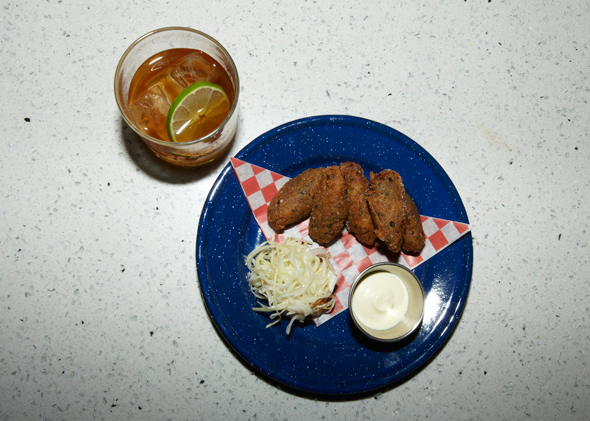 Now onto the food. The beauty of the menu is its small, reasonably priced and almost everything is made for sharing. This means there's no excuse not to try almost everything. We start with the Accra ($5), which is shredded malanga mixed with herbs and then fried to perfection. But the real moneymaker is the pikliz (picklese), which is a habanero-infused Haitain slaw that tickles the back of your throat and leaves you longing for more. Luckily, they serve this stuff with almost all of their dishes. 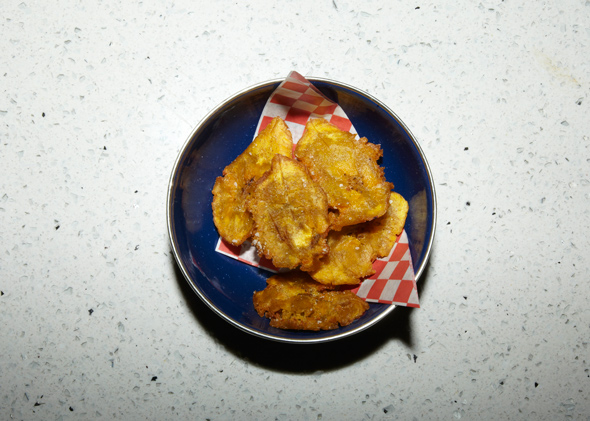 Then there's the Banana Frites ($3), which are golden and crispy but a little too salty for my liking. And trust me, I've never met a salt I didn't like. 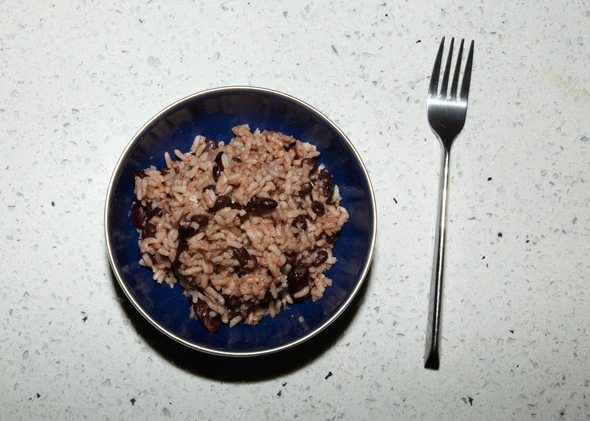 Truthfully, I was disappointed upon discovering the Rice 'N' Beans ($4) were not the no-frills, refried kind I've grown to love, but a refined combination of kidney and black beans mixed with scotch bonnet peppers that pack a punch after first swallow. If anything, they'll do a good job at soaking up all that rum. 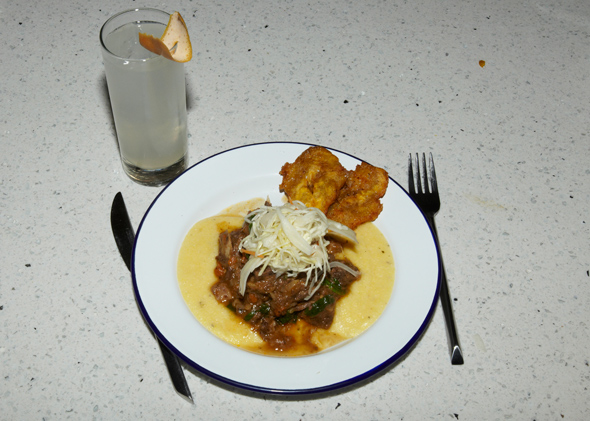 The flavours start to get really serious with the Legumes and Goat ($12), which rests atop a bed of Spanish polenta and is topped with, you guessed it, that mouth puckering pikliz. This is the first dish of the night that truly impresses. 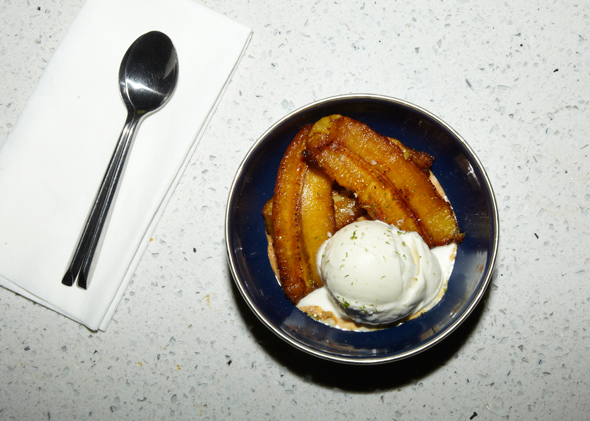 If you're looking for a happy ending, there's only one dessert on the menu, the Sweet Fried Plantains with Coconut Ice Cream ($11). But who needs more than one option when there are over 60 varieties of rum to choose from to wash down the other rum you just had? This time I opted for a white rum made from sugar cane juice instead of the usual molasses. 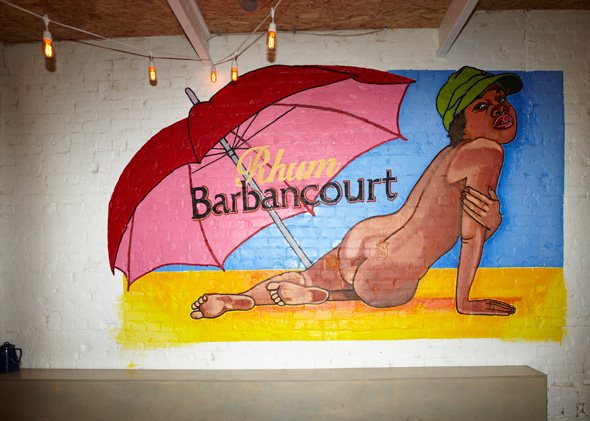 It's rather remarkable that Toronto didn't have a trendy Haitian restaurant until now. But is this place authentic? I don't know. But what I do know is Chef Jesse Grasso makes intriguing food. Besides, all that really matters is the menu is affordable and the sweet, sweet rum flows endlessly. 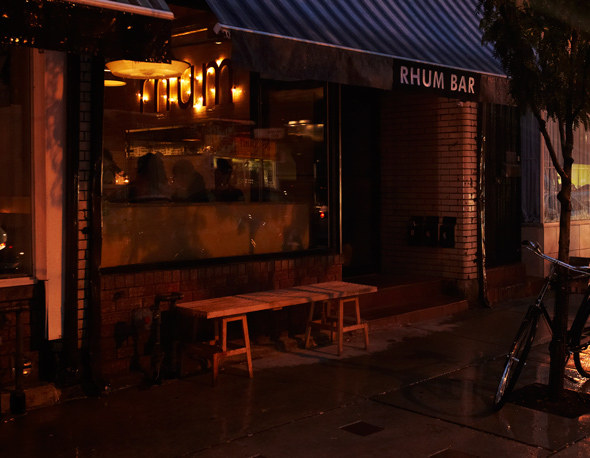