Rakia Bar is difficult to categorize. Although it's open for brunch and dinner 7 days a week, with a mouthwatering menu composed by Chef Brook Kavanagh (of La Palette fame), much of its branding (pun intended) focuses on rakia, an incredibly aromatic fruit brandy. 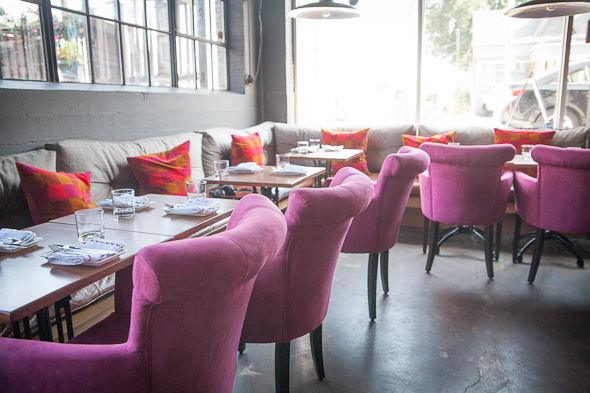 The interior is a basement space with industrial accents--exposed ducts, sleek black walls, and even a copper still--as well as distinctly lounge-y elements such as the plush bright pink chairs, and utterly relaxing leather-trimmed banquettes. A carved portrait of Nikola Tesla scowls from the back. 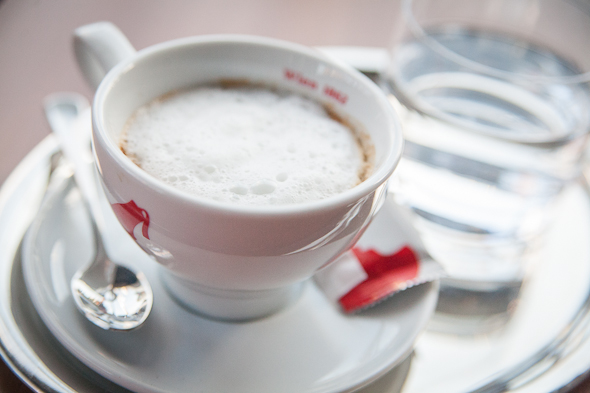 Despite its sunken location, ample light spills out through large windows over late brunch diners and the open kitchen on a Wednesday afternoon. When you enter, you're welcomed by a large coffee maker that no doubt sees heavy action in the morning, and is the exclusive Canadian brewer of Julius Meinl coffee (one of Europe's oldest roasters). 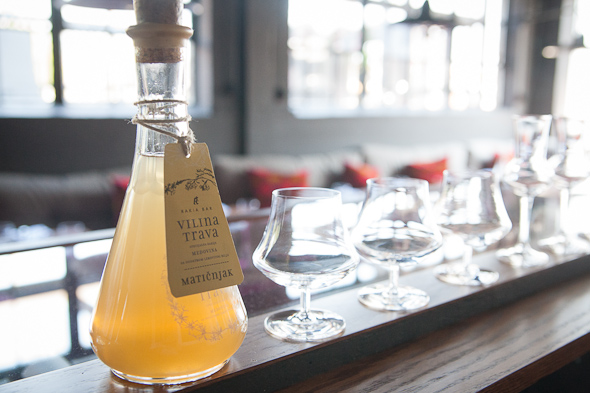 First opened in Belgrade, this is the European restaurant's first foray into North America. It's helmed by Dusan Varga, who is warm and utterly knowledgeable about his craft, the art of producing rakia, and his vision for the space (the latter of which is rarer that you might think). Rakia Bar has its own distillery in Europe, and serves many of its proprietary brandies in the bar. Their line of Fairy's Wildflower--plum brandies infused with notes of thyme, honey, mint or lemon--will soon be available at the LCBO, and are also available as flights (which come presented on a wooden platter flanked by a bell to be rung when you're ready for more). 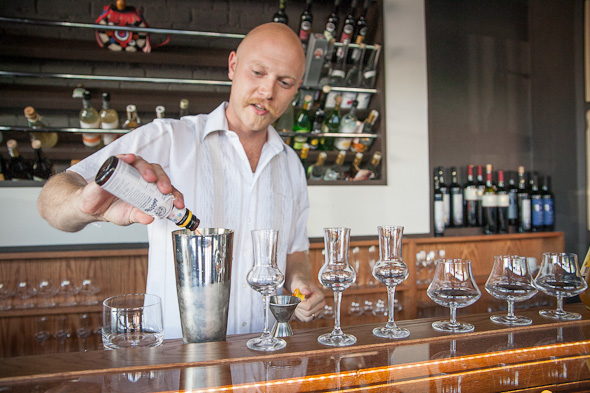 What can I say? It's an authentic, cosmopolitan Eastern European experience. As a full disclaimer, I should mention that part (but not too significant a part) of my delight were the familiar flavours of my childhood. For example, kashkaval , an aged sheep's milk cheese that my grandmother used to serve with apple slices, comes paired with a gorgeous, rose-scented quince brandy. 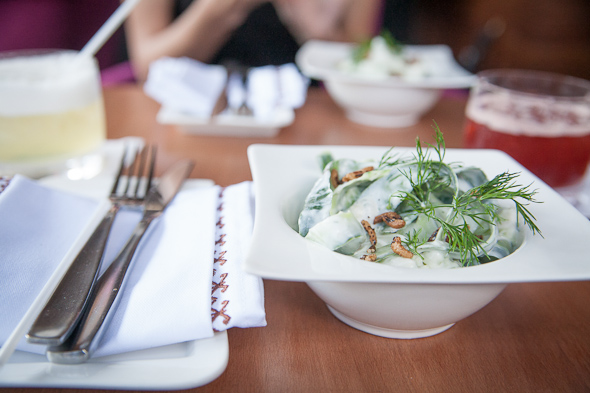 Slices of baguette are paired with a decadent butter spread of spiced, suckling pig run-off. To start, we try the cucumber salad ($6). It's a fresh-looking plate, with lengthwise cucumber shavings coated in house-cultured cream, and accented with dill and puffed wild rice. Although the cream is a bit too heavy for my taste, the other flavours are well-balanced, and the wild rice lends a bit of unexpected crunch. 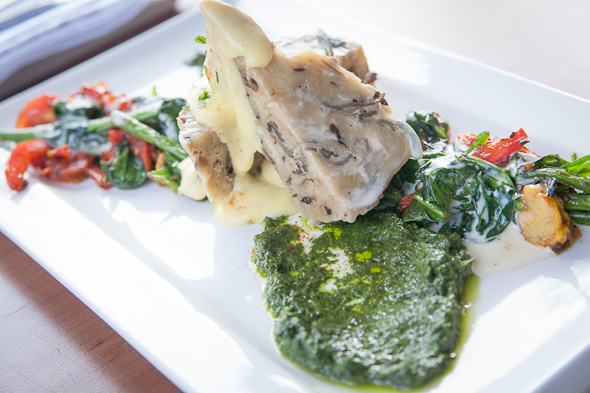 Our next plate, a vegetarian dish, is Varga's attempt to lure herbivores back onto meat. It's a gibanica ($22)--a phyllo pastry soaked in cream, then layered and baked--bursting with thick, meaty mushrooms, fresh seasonal veggies, and a rich brown butter hollandaise. The texture of the gibanica was thoroughly satisfying, and almost reminiscent of a stew. It arrives on a plate dotted with wilted spinach, asparagus, and bright red peppers, but the gibanica needs no support, and is undoubtedly the focus of the plate.

In the interim, we sample the Commissar ($7.50), a pear-based brandy, as well as the Grandfather ($35), a plum brandy that was then aged in barrels to impart a subtle smoked aroma. The variety of brandy is instantly identifiable by its scent, and although Varga warns us in advance of the wave of warmth that's guaranteed to spread across your chest on its way down, it still catches us off-guard. 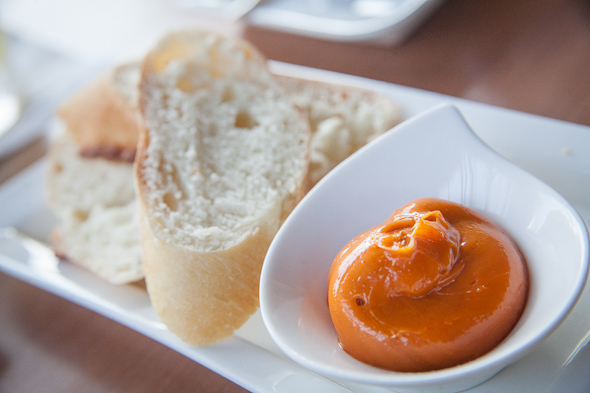 Then arrives the show-stopper--duck leg paprikash ($30, lead photo). A paprika-dusted duck leg, pan-roasted to tender, crispy-skinned perfection, on a hearty stew of baby spinach, summer squash and nokedli (Hungarian egg dumplings). You'll need a big appetite for this, and the dish could easily be split between two people, but we weren't so much passing it back and forth as tugging it back towards ourselves. Perhaps we were favored with a particularly fine duck leg, but it had just enough fat, and the balance between the roasted, flavoured skin and the juicy meat was the mark of a pro. 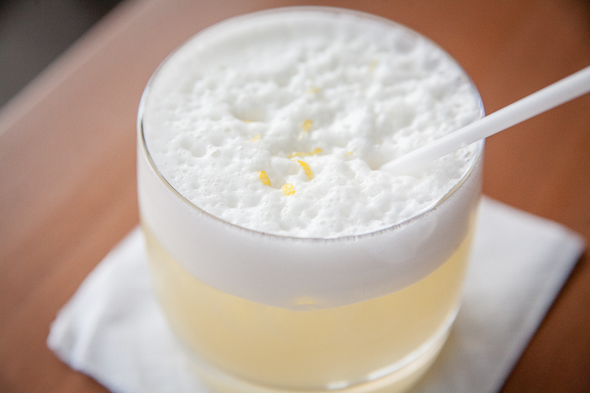 The food is rich, satisfying, and admittedly heavy (in that distinct Eastern European way that induces psychosomatic visions of a grandmother saying you're 'all skin and bones'), but the drinks can't be overlooked. Varga tells me that the liquor, which is naturally fermented and distilled by hand, is meant to be sipped, and paired with food. There are also 6 cocktails, playfully named after Eastern European stars of literature and film--my favourite is the Petefi ($11), with its blend of cherry brandy, clove, cinnamon and cherry juice syrup. 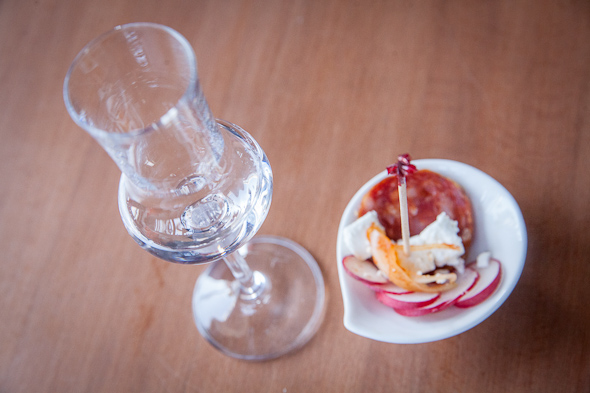 Varga's concern isn't client turnover--rather, he encourages people to stop in for the brandy alone. To this end, each 1 oz. glass from the bar's 40 or so brandy offerings, is paired with a small mezze--one-bite tapas which are designed to complement the subtle fragrances, and deliver some much needed sustenance. 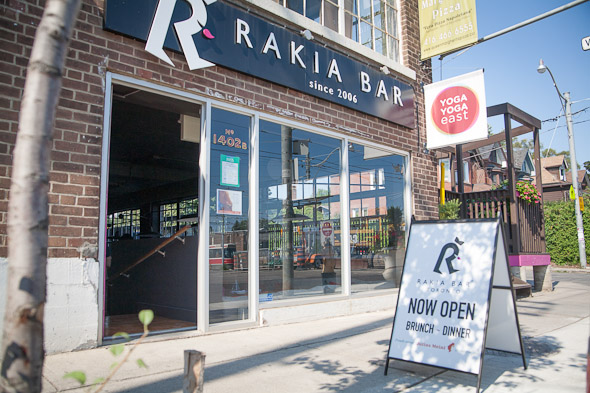 Or, if you're in the market for a more significant snack, try the crispy smelts with lemon and capers ($5, and a childhood favourite of mine), the dalmatian calamari ($15), with inked wild rice, scallops and red pepper, or the chevapi ($15)--a trio of uncased minced meat sausages in venison, boar, and lamb, and paired with sour cherry and onion preserve and Balkan-style flat bread. Just come prepared with forgiving waistbands.