Raca Cafe & Bar has taken over the short-lived Ze Ze Food & Drink in Parkdale . Named after owner/chef Ivana Raca, this restaurant is a reflection of everything she is. She's worked hard and paid her dues in Toronto's fine dining scene, and now she's opened a place of her own.

A protege of Mark McEwan , she started at the bottom when she was 17 at North 44 and became its first female saucier at 20 (she came up with Rob Gentile of both Bucas and Bar Buca ). By 23, she was sous chef at One , and the next year McEwan appointed her to run his Don Mills food emporium as its first female executive chef. "I feel 100," she jokes. 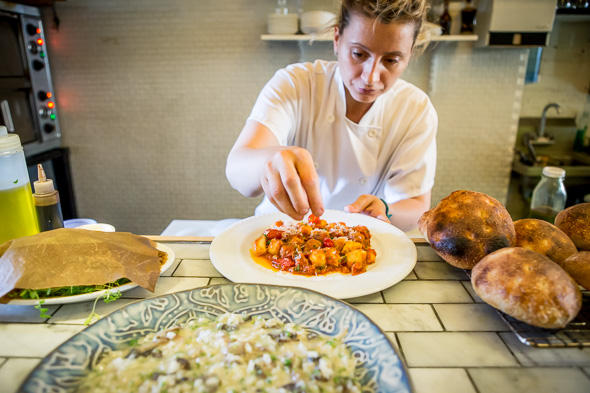 After a few years, she felt she'd hit a plateau as a chef, and took off to live and work in Australia. Raca joined Matt Basile of Fidel Gastro's and Lisa Marie on a tour of Asia, and felt reinvigorated by her travels. Now, after two years away, she's delved back into the restaurant biz here with a fresh perspective. 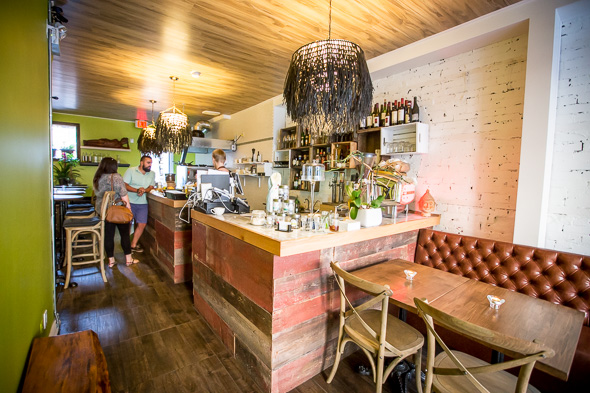 Decor imported from and inspired by Bali, Indonesia gives the place a casual, Zen vibe; a Buddha theme can be found throughout. It's a complementary yin and yang contrast to Raca's own spirited, driven personality and her sophisticated fare. She wanted to feel comfortable in this setting, as she spends so much time here it's practically her home. 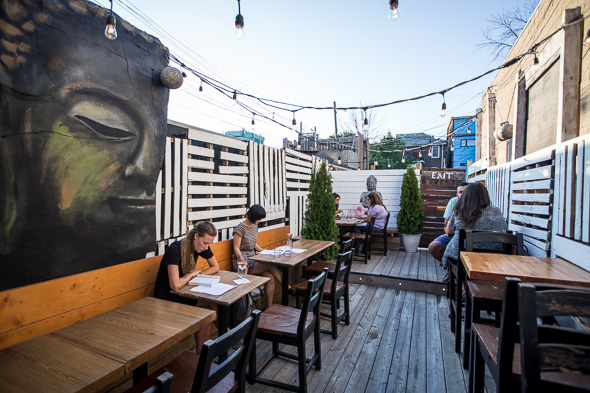 Lights are strung with rope across a lovely back patio that fits about 30, and it's a relaxing space to have a drink and a meal on a summer evening. 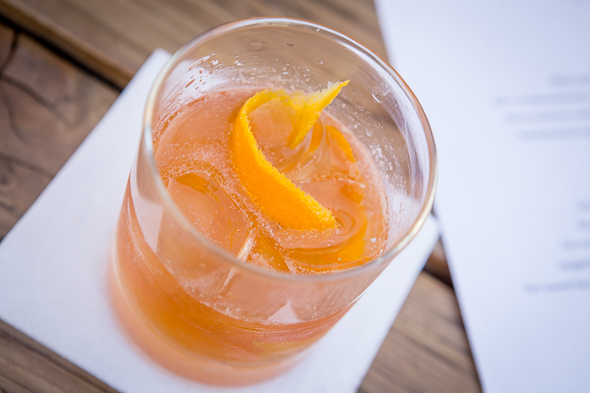 Ed Grim of Oliver & Bonacini has helped Raca create a small selection of cocktails that are twists on classics, like a Spiced Old Fashioned ($10) with homemade spiced orange syrup, brown butter bourbon and an orange zest.

It goes down easier than other traditional Old Fashioneds I've tried, so I'm surprised when Raca tells me men can't handle this version (they think it's too strong), while ladies have practically been chugging it. 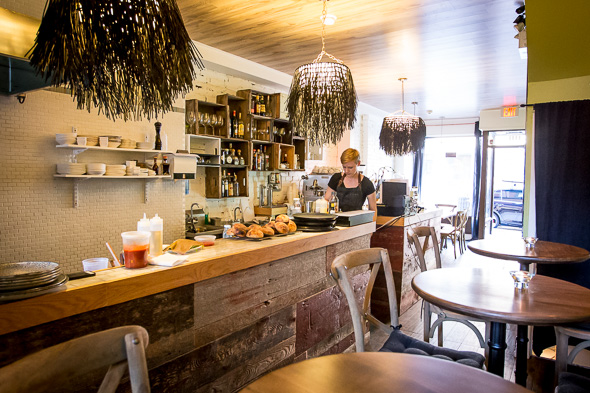 The food menu showcases Raca's training in French and Italian cuisine (with a $30 weekday prix fixe that's quite a decent deal), and you can watch her cook it in the tiny, intimate open kitchen. The dishes she manages to pull off are pretty impressive, considering she's working in such a tight space. 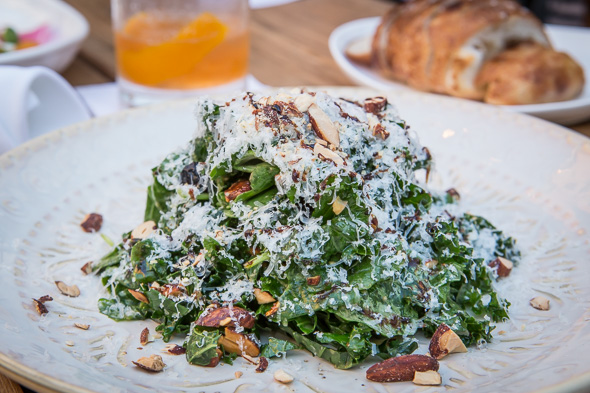 We start with a kale salad that contains smoked almonds, dried blueberries and a snow of shaved Manchego cheese dressed with a balsamic shallot vinaigrette ($13), and although kale salads are kind of passé now, this one is still worth a try. It's a perfect balance of flavours and textures: sweet, salty, slightly acidic and crunchy. 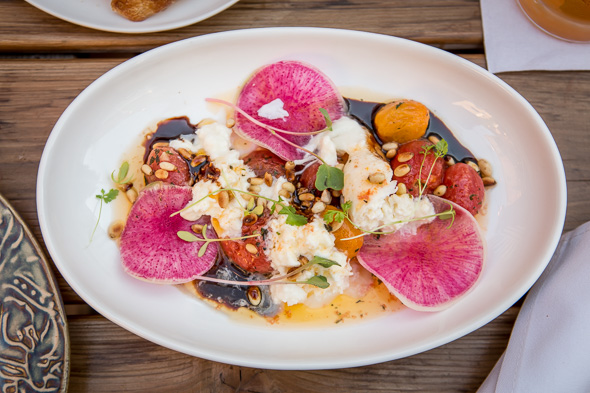 Warm heirloom confit tomatoes, pulled burrata, thin slices of watermelon radish and toasted pine nuts ($14) arrive next, and it's a nice mix of tart, soft and crisp bites. We happily sop up the remaining oil and vinegar with the addictive house-made bread. (The smell of it baking is irresistible.) 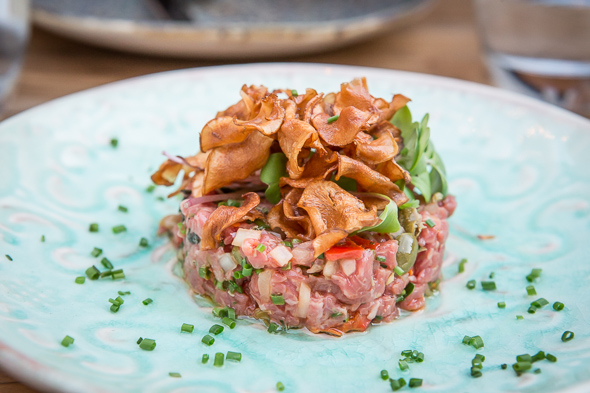 An untraditional spicy steak tartare is accompanied by slices of French baguette ($15/$24), and has a good kick to it. Pea shoots and Jerusalem artichoke chips add a pleasant crunch. 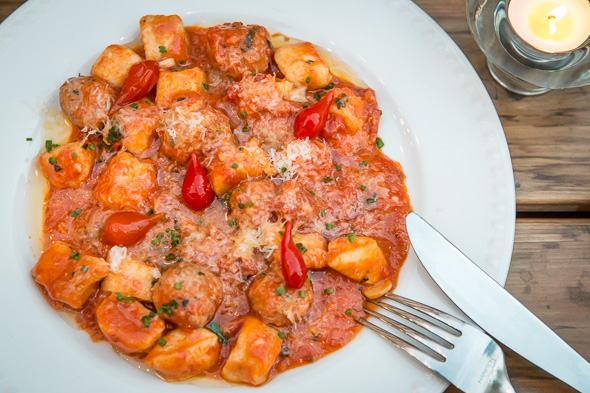 As for mains, we try the spiced Peruvian pork meatballs with house-made ricotta gnocchi in a tomato ragu ($20, top photo), and it's some of the best we've ever had. The well-seasoned meatballs are just the right size, the light and fluffy gnocchi are soft pillows with a hint of lemon and the sauce (although a tad oily) is flavour-packed.

Peruvian tear-shaped sweet peppers sprinkled on top are a revelation: they're juicy bursts of tart sweetness.

Roasted wild mushroom and truffle risotto with Parmigiano Reggiano and basil leaves as garnish ($21) is our second main, and it's rich, creamy and satisfying. "Nobody can touch my risotto," she boasts. It's her signature dish and her favourite thing to make. 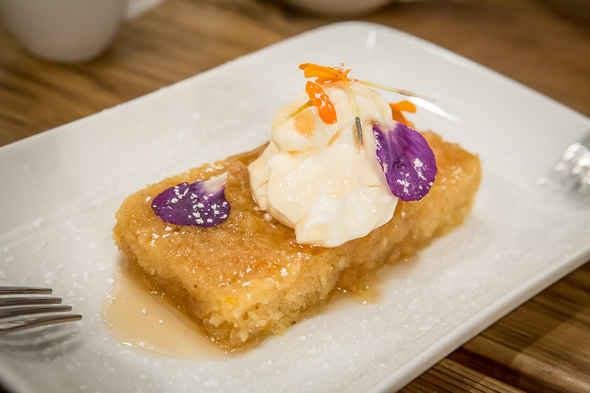 By now, we're pretty stuffed, but can't resist dessert. We decide to share a spiced orange semolina cake with Mediterranean honey from Montenegro and a dollop of tangy and tart goat yogurt on top ($8). Garnished with colourful edible flower petals, it's an appropriately light end to our meal.

Raca clearly respects her food and genuinely cares about her cooking, and it appears she's happy with where she's currently at. 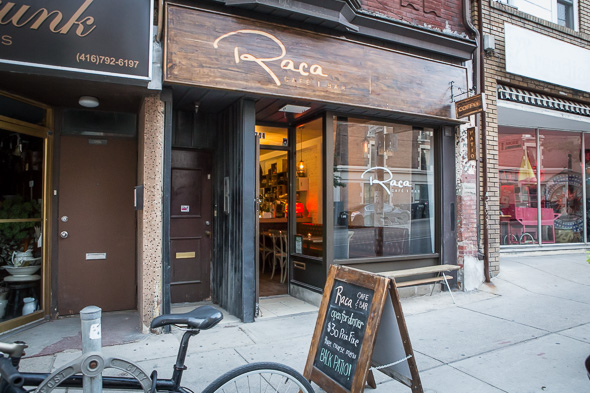