Parts & Labour gets a lot of things right: their cocktails have been classed among the city's best ; the in-vogue communal tables are not only ideal for larger dinner-parties, but also meeting new people as individual groups seem to fuse into one over the course of the night; and The Shop has made a name for itself hosting top-notch punk acts and hip-hop dance-parties Saturday nights. So it comes as no surprise that Chef Matthew Matheson is meeting high expectations with brunch. 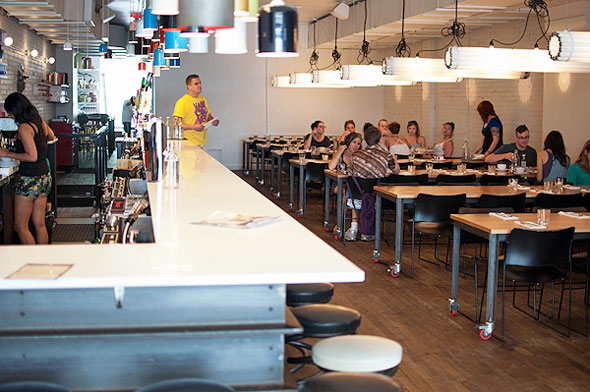 Despite near-freezing temperature and comme ci comme รงa service (not rude but definitely lacking personality), it hit all my personal brunch fundamentals: the food came out quick and hot, water glasses were topped up continuously, and the caesars were delicious.

With a background in bartending and a deep love for Caesars, I am pretty picky about how I like the classic brunch cocktail. The key: extra Worchester and fresh cracked pepper. We watched as the bartender landed both requirements and added tobasco sauce according to our orders. 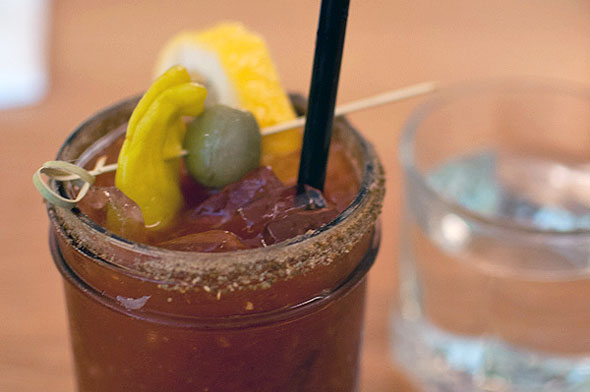 She then topped the drink with a dollop of St. Ambroise Oatmeal Stout, which helped it to keep its thickness. A spicy pepper and olive skewer took the P+L Caesar into the drink-appetizer category.

The menu covers the essentials, with steak and eggs, blueberry pancakes for the sweet tooth, and a vegan option, but it was the Shake N' Bake Porkloin, with white gravy, a biscuit and fried egg, that initially caught my eye. Not convinced I could handle white gravy so early in the morning, I backed out and opted for the Ploughman's Breakfast. 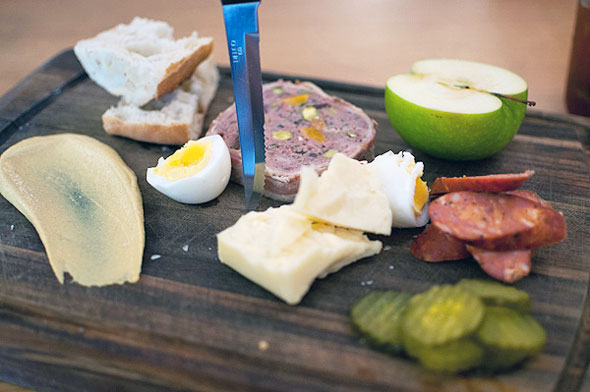 Just a light fare of soft-boiled egg, a slab of homemade terrine pate, with chunks of blood sausage, apricots and pistachios, some Mennonite gypsy sausage and 10-year-old cheddar, paired with homemade butter pickles and pieces of warm and perfectly chewy baguette, then finished off with half a green apple--all served on a wooden cutting board stabbed with a knife. It was exactly what I want every morning, but you've got to be seriously hungry to tackle this version, or at least have friends with you that are.

The Steelhead gravlax was replaced by salmon the morning we were there, and served with "green tomato chow chow" (better known as a small portion of romaine with a side pile of cherry tomatoes) and boiled creamer potatoes. It functioned as lighter fare, with nothing left wanting but also nothing worth mentioning. 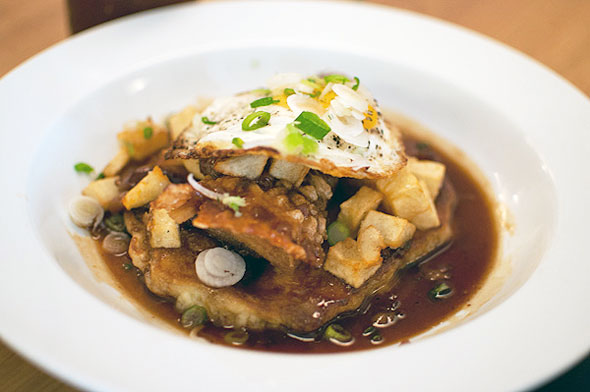 The best dish was The P&L. The namesake breakfast featured a medium fried egg served over pork belly on a pancake, served with hash and maple trotter sauce and garnished with onions. The taters were blah and the cracklings were tough to cut through, but so worth the effort. Salty-sweet perfection.

Parts & Labour deserves a place among Toronto's dependable brunch destinations and the food is well worth any trek to Parkdale . I'm already planning my return, and have my eye on the shake n' bake. 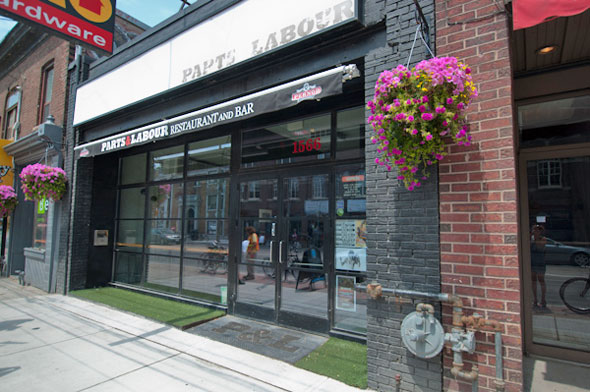 Writing and photos by Megan Leahy