Outhouse Panini and Espresso Bar is a good excuse to get out of the house, and that's what owner William Ashman wants you to think. Found on a quiet stretch of Jane Street at Annette, this oddly named cafe has only been open for nine months now, but already has a steady stream of regulars. This is due in part to the fact that William makes tasty sandwiches and drinks, but moreso for the stories that he serves with them. And everything at Outhouse comes with a story. 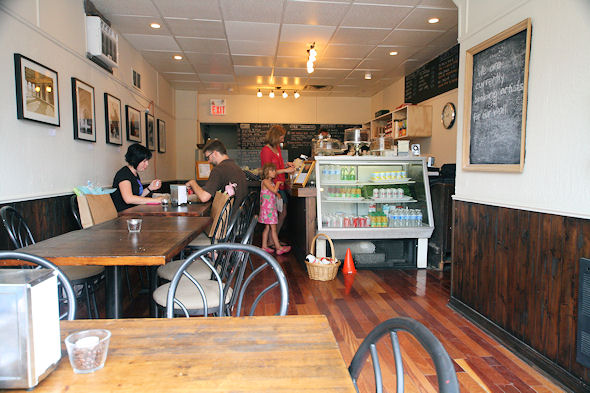 Previously the owner of clothing store Haus at Bloor & Lansdowne, William realized his lifelong dream to own a restaurant when he opened Outhouse. His passion for his work extends beyond food and drink to the people that he serves. Upon walking in I was greeted like an old friend, and immediately felt welcome. William doesn't think our society places a high enough value on chattiness , and is doing his part to change this one customer at a time. He believes in bringing people together to foster a spirit of community, and he's a pro at it. William's ebullience is infectious. 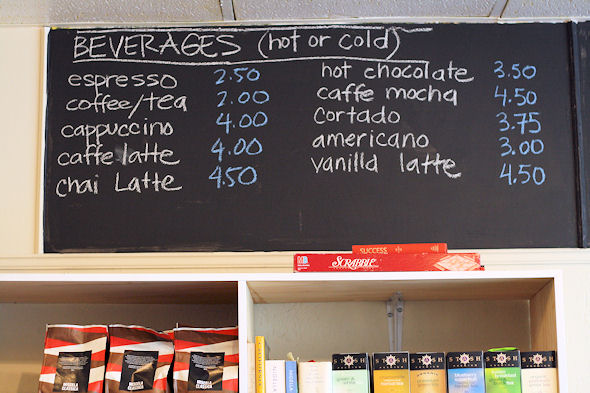 We placed our order to the sounds of Jay-Z (William is not a fan of the more typical jazzy cafe music) and he regaled us with tales as we waited. As previously mentioned, all menu items at Outhouse have a story behind them, and William will tell you the history of each order as its taken. I won't divulge them here as part of the fun is hearing them firsthand! 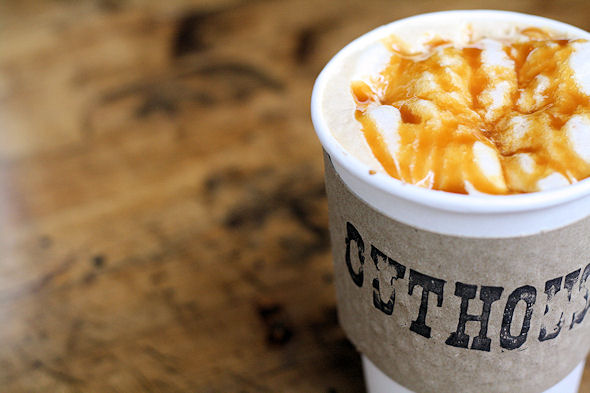 All the drinks are made with Rufino espresso and we went with the Dirty Chai, a chai latte made with espresso ($4.75) and the Lawsuit, a vanilla latte with caramel drizzle ($4.50). The Dirty Chai wasn't as syrupy sweet as other chai lattes I've had, as the espresso added some bitterness, thus balancing out the flavour. It was good, but the winner of the two hands-down was the Lawsuit.

I love a good vanilla latte, but I always have to ask the baristas at certain big box coffee giants for half the syrup. Not so at Outhouse. First contact with the caramel drizzle provided a lovely burnt sugar aroma and, yes, it was indeed sweet as caramel should be, but was toned down as the latte quickly followed suit. Repeat. 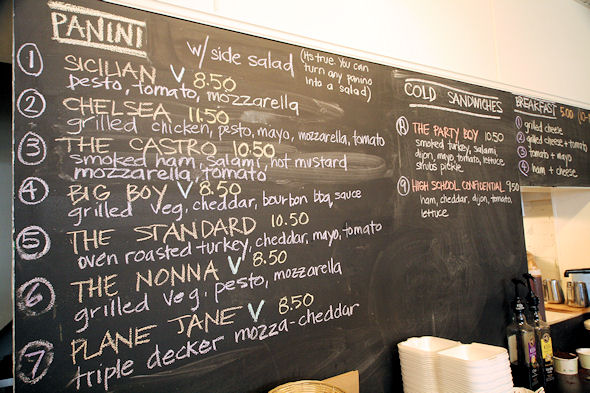 For the carb or gluten conscious, a note on the chalkboard menu reads that every panino can be made into a salad. As much as I enjoy salad (and as much I should slow my carb intake) I will take a sandwich over one any day. My dining partner and I agreed on two - the Nonna and the Chelsea - and split them accordingly, which is really the best thing to do for decision-making challenged folk such as myself. 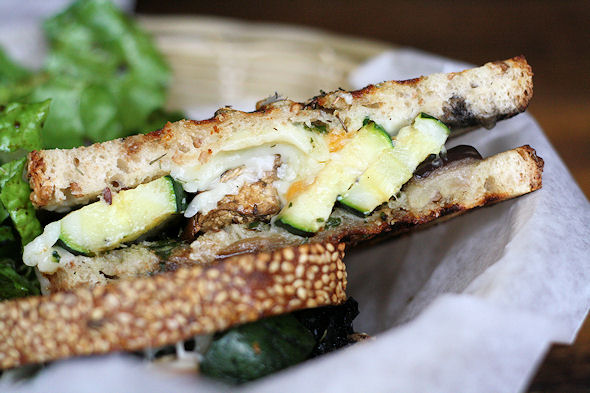 The Nonna ($8.50) is the vegetarian option stuffed with grilled veggies and painted with pesto and mozzarella. The (predominately) eggplant and zucchini retained some bite instead of being too soggy as grilled sandwich vegetables can often be. The Chelsea, ($11.50) came with grilled chicken breast, tomato, pesto, mozzarella and mayo. At $11.50 it's a bit steep, but to be fair, ours had a very generous amount of chicken (and consequently mayonnaise as well, which I might ask to be put on more sparingly the next time).

All panini come served on sesame Bavarian style bread and with their fair share of mess, so keep napkins close at hand. 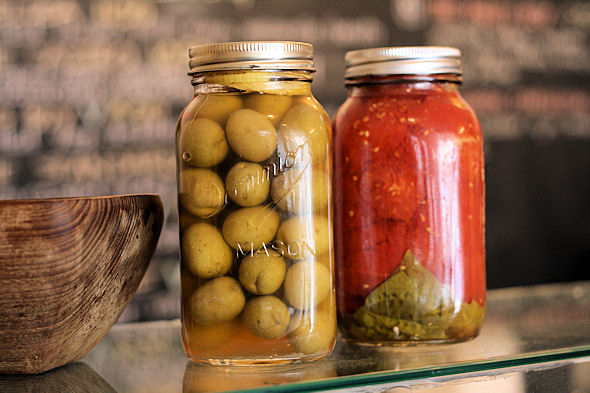 Desserts are also on the menu and although they aren't made onsite, William picks them up bright and early every morning from OMG Baked Goodness , so they are as fresh as possible. I wish I could say that we indulged in a cookie or a tart, but we were sufficiently sated (see: bursting at the seams) after our panini and coffee. 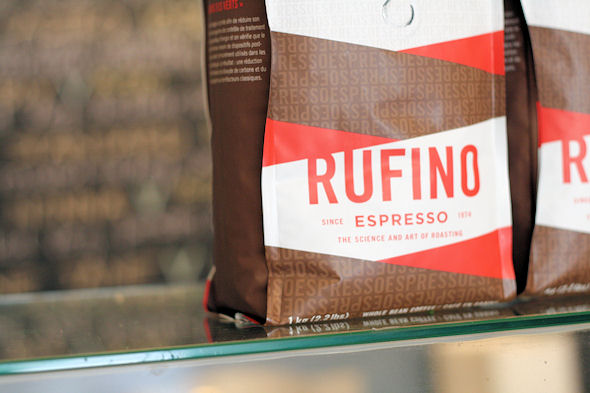 We stayed much longer than planned as we were enjoying the company, and we weren't the only ones. Everybody who walked into Outhouse seemed to feed off of William's energy and (if they are anything like us) left in a better mood than when they came in. 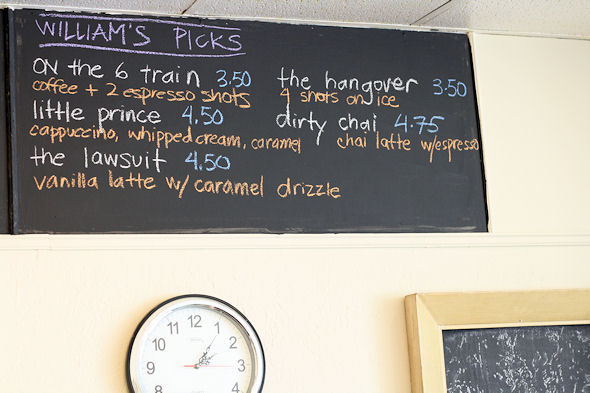 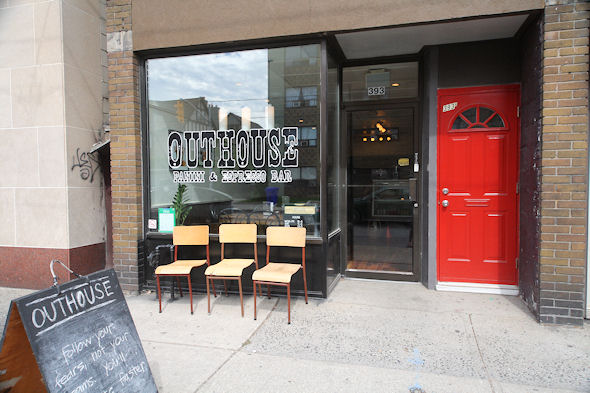