Fancy Franks has been open for just four days, but the gourmet hot dog shop has been generating murmurs of excitement since a bold-coloured mural appeared on its College St. brick wall about a month ago.

It's a move of promotional genius courtesy of Pulp&Fiber and the Community , but the kids who evidently skip up and down the street, singing a jingle they're made up themselves about the shop, are a case in point of advertising that money can't buy. 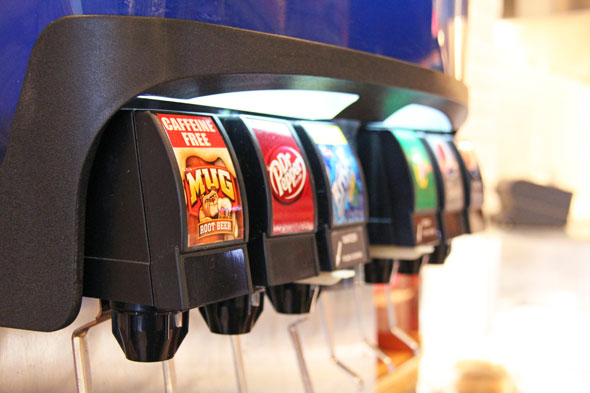 Owner Angelos tells me that they're providing more than just gourmet toppings: "Our dog is 100% beef in an all-natural lamb casing, which gives you a bit of a snap," unlike the casing-less dogs sold by street vendors. The meat is provided by a local Toronto butcher, the toppings are fresh from Kensington Market , and the buns come from Silverstein's Bakery down the street. With their 11am-11pm hours, they're drawing a stream of school-age kids, 20-somethings, and late-night traffic. 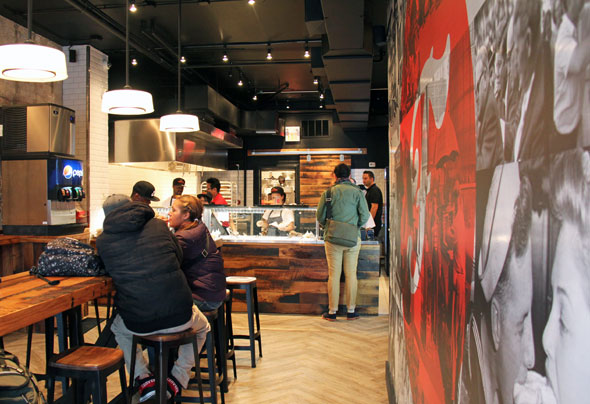 The interior is unrecognizable as its former self, thanks to the designing touch of Marc Kyriacou. Reclaimed wood reigns supreme, in the rich wood countertops and the faded herringbone floors. A large vintage mural covers one wall, and the spot's seating is divided between coveted window seating and a long communal table.

The outdoor mural is the work of Andrew Kidder , the man behind Toronto restaurant signage for La Carnita and The Yukon , among others. 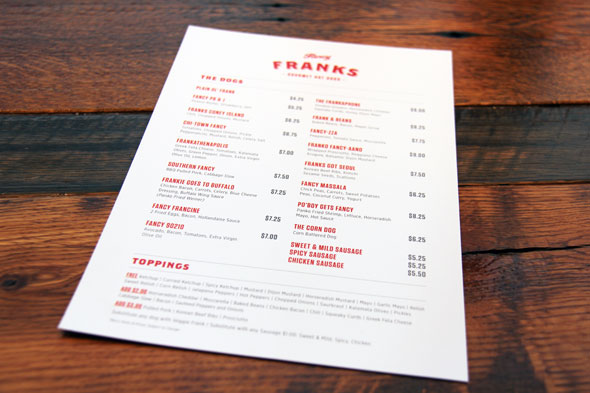 The menu consists of several (read: many) hot dog options, including the Franks Got Seoul ($7.50, with Korean beef ribs, kimchi, sesame seeds and scallions) and the Franko Fancy-Aano ($9 for wrapped prosciutto, reggiano cheese and balsamic dijon mustard). I asked the dumb, and to me obvious, question: "These things all come on top of the dog?" The answer is a smiling yes. There, you've been spared the humiliation. 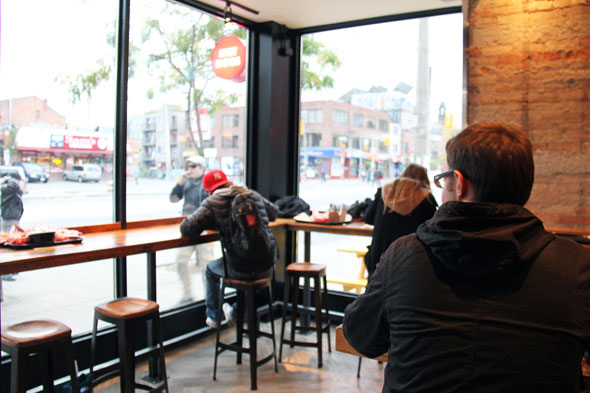 You can also go for the humble corn dog ($6.25), and smother it in free toppings such as curried ketchup, hot peppers, saurkraut, kalamata olives and pickles. For $2, you can add chicken bacon, feta, or baked beans, or, if you're feeling fancy, top it with prosciutto or pulled pork for $3.

I overhear some complaints about the dog-to-bun ratio. While the hot dog itself is on the small side, the large, white bun is a definite necessity if indulging in one of Franks' more decadent options. 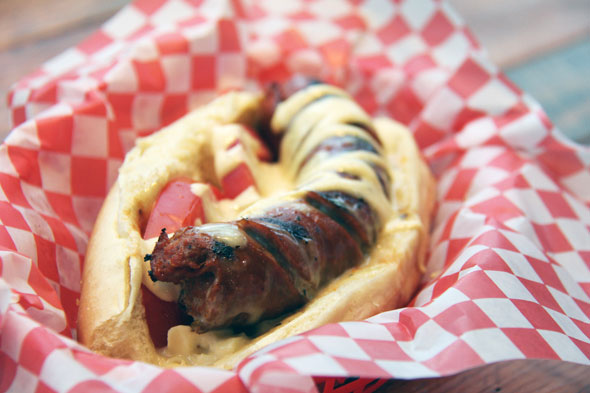 The Frankaphone ($9), has been doing very well, with its mix of smoked gruyere, horseradish cheddar, squeaky curds, and honey dijon mayo. We opt for tomatoes, extra mustard, and the $1 upgrade to the spicy sausage (sweet mild and chicken, and veggie dogs are also available).

It's well worth it--a robust and satisfying piece of meat, although whatever spice there might be is fully sopped up by the cheeses. This riff on the French's love of their fromage is well-done, but the cheese itself adds only a touch of richness. Without the sausage, it might be fairly unremarkable. 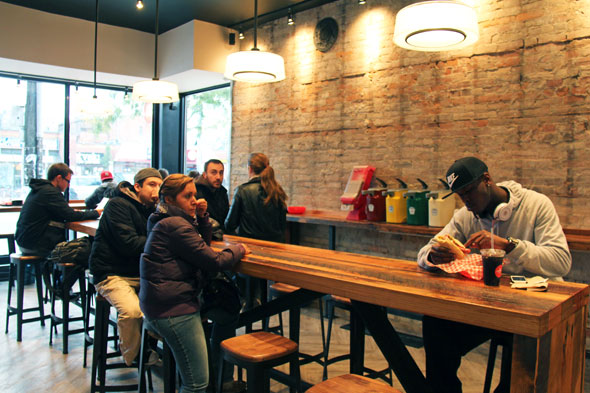 I've been on something of a po'boy kick lately, so even though I at first glance dismiss the Po'boy Gets Fancy as excessive, it turns out my impulse control is feeble in the face of panko fried shrimp, horseradish mayo, and hot sauce. There are a few slender pieces of lettuce, to which I add tomatoes and horseradish mustard. Word to the wise: always add the latter.

It's a sandwich that shouldn't work, but somehow excels, thanks (and this is damning by faint praise) to the modest girth of the hot dog. The fried and heavily-breaded jumbo shrimp and array of sauces are the dominant flavours, with the hot dog registering as almost a textural afterthought--a good thing, to be clear. 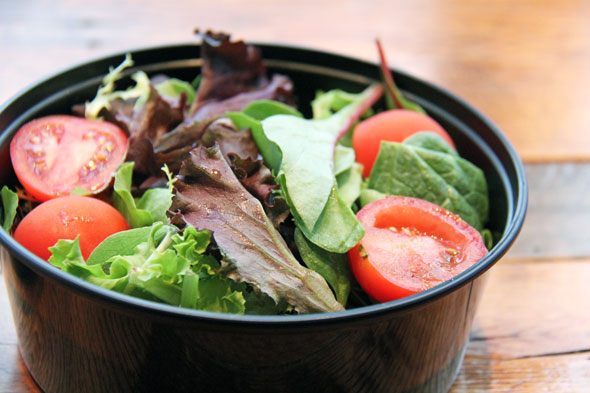 A word about the combos: they're not as economical as you might think. If you add any fries and drink to your dog, you'll save $1. Likewise, if you add, say, a green salad (originally $4.25) or a chili poutine ($7.50), you'll again save just $1. The drinks are added full-price, and run from $2 for fountain drinks to $2.49 for glass-bottled Pepsi or sweet-ambrosia-of-my-youth orange Crush. 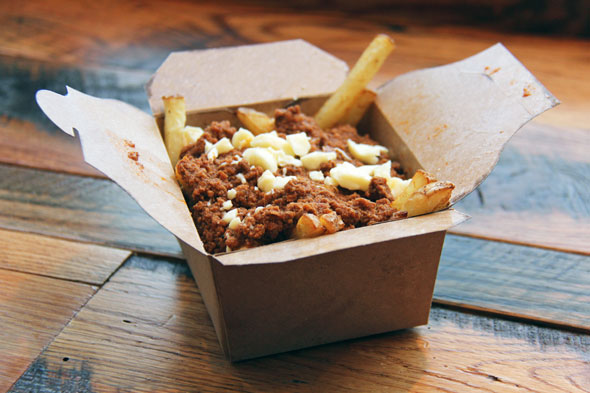 The chili poutine ($7.50) is topped with chili and curds, but the gravy is nowhere to be found. It's not as terrible an oversight as it might seem, because the chili is almost entirely composed of ground meat, with a touch of jus and rich spices. The green salad is simple spring mix and halved baby tomatoes, topped with a rich balsamic vinaigrette (other options are available).

If you stop by next week, Franks will hopefully be complete with the much-anticipated arrival of a conveyor-belt-style donut machine from California, which has been held up at customs. They'll be mini donuts, sold by the dozen ($4-$5.25), and available in flavours as basic as powdered sugar, and as slightly-less-basic (but no doubt mouthwatering) as lemon curd and powdered sugar. 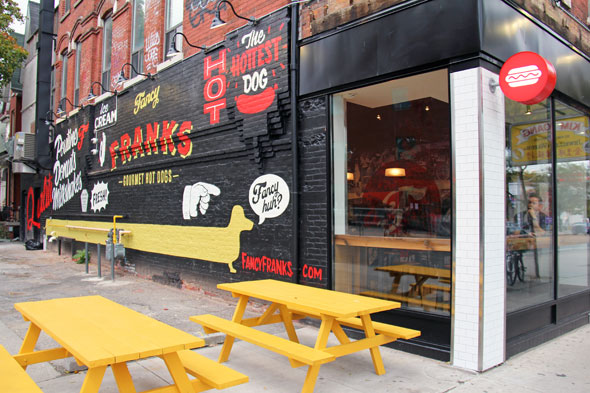 So if you're not in the market for a meat coma, you can stop in for some sweet treats and one of three basic milkshake flavours ($4.25).