Memphis Smoke House has been open for a little over six years, and can be found on the popular strip of restaurants that occupies Yonge Street, north of Sheppard. After a trip to Memphis years ago, owner Sue Kim had a burning desire to open her own BBQ smokehouse, which would specialize in the southern flavours she so enjoyed on her trip.

After sampling hordes of briskets and pulled pork, she was fortunate enough to have met the legendary Robert Moye, chief Pitmaster at Corky's , who agreed to show her the ropes and even share his recipes. 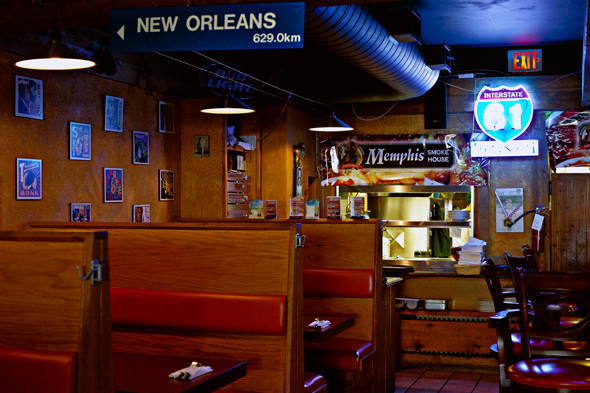 The result is a small dining room adorned in not-so-subtle nods to smokehouse cuisine, with kitschy pictures of jazz greats paired against neon "Interstate 61" signage. A small bar offers solo guests respite from the dense dining room, where the tables are a bit tightly packed in some areas.

A few TV's tuned to TSN offer the usual sports exposure, and the beer selection covers the expected domestic drafts (Rickards, Canadian, Coors Light, Keiths), while the cocktail and martini list compose half of the drink list. Not sure a chocolate martini would best complement smokehouse ribs, though. 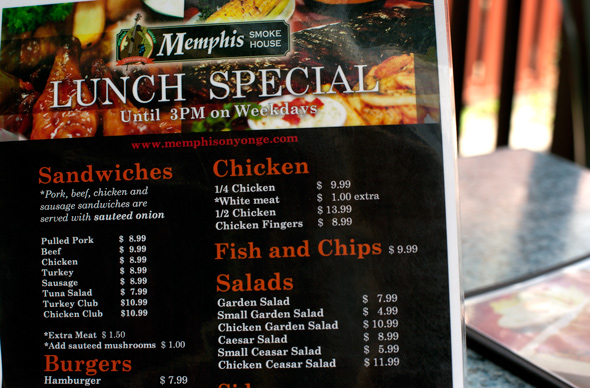 After nabbing a spot on the busy patio facing Yonge Street, we were greeted within seconds and had our menus and drink orders taken — no small feat during a busy lunch service.

While the restaurant is a self-proclaimed smokehouse, it would be nice to see them stick to that vision. Instead, the menu is a smorgasbord of culinary confusion. 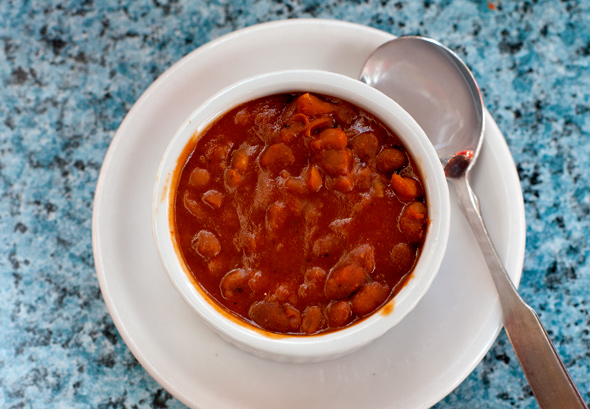 Want mussels as an appetizer to your ribs? Or how about a chicken stir fry? While the rib menu options dominate the menu, we chose to stick to the lunch-sized options and ordered the Smoked Beef Brisket Sandwich ($9.99) with an upgrade to Sweet Potato Fries ($1.00). The beef was perfectly sliced, offering hints of intense flavour courtesy of the smoked crust. A light drizzle of barbeque sauce enhanced the sautéed onions and the Kaiser bun held it all together quite well. Sweet potato fries paired with a watery chipotle sauce were not worth the extra coin, but the tangy and refreshing coleslaw offered a nourishing crunch. 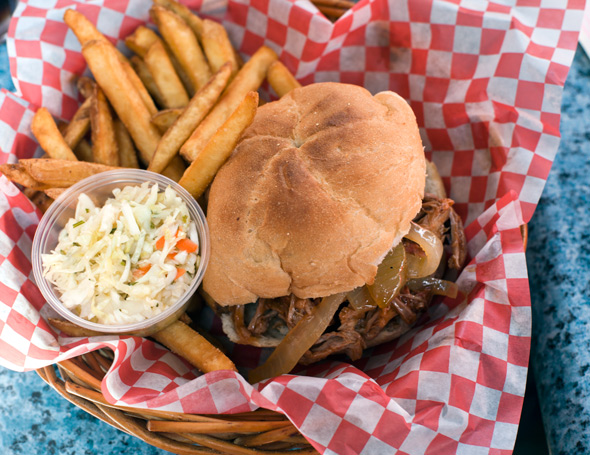 The Smoked Pulled Pork Sandwich ($8.99) had a delicate smoky flavour, but if you're into saucy and flavourful barbeque then you'd likely be disappointed. The meat was tender, but didn't offer any of the expected sweet hickory I expected. It was pretty plain, which is in line with the 'Memphis-style philosophy,' but I prefer more distinct woody notes paired against sweet, messy sauce.

The fries were crispy, salty and better than the sweet potato variety. A side of baked beans ($1.00) were soaked in a tomato base, with the occasional crunch of red pepper thrown in for good measure. Nothing to complain about here. 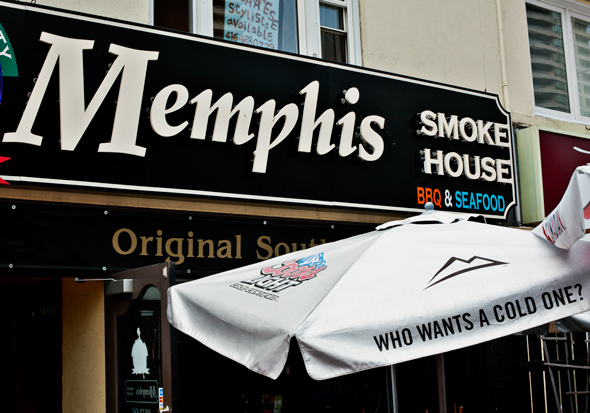 While the food could use some minor tinkering, the service would bring me back in a heartbeat; it was borderline intuitive, which at this price level was a most welcome surprise. While Memphis Smoke House would have some stiff competition from Phil's and Stockyards , it's definitely a solid option for the north end of the city. Just make sure to order the barbecue and not the other menu items.

Memphis Smoke House takes reservations of all sizes, and offers take-out on request.