Trinity Common occupies the Kensington Market address that was formerly Waterfalls Indian Tapas . It's owned and operated by the Shepherds (Mike, Lisa, and Don) and partner Alan Walker, all of whom are involved with the Big Fat Burrito chain.

The name Trinity refers to the trifecta of offerings, which include food, booze, and entertainment. In addition to menus from the kitchen and bar, there's a small stage tucked away in one corner where live, acoustic, and DJ sets are programmed. 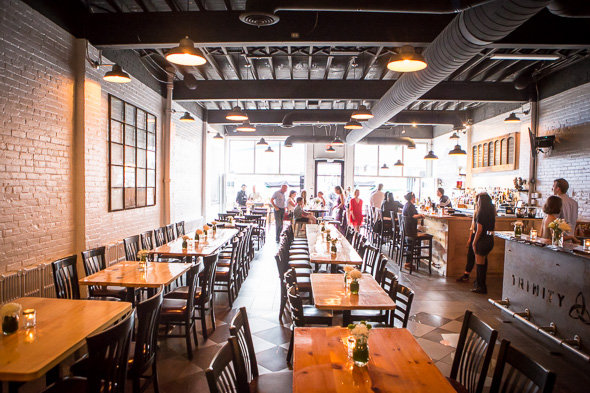 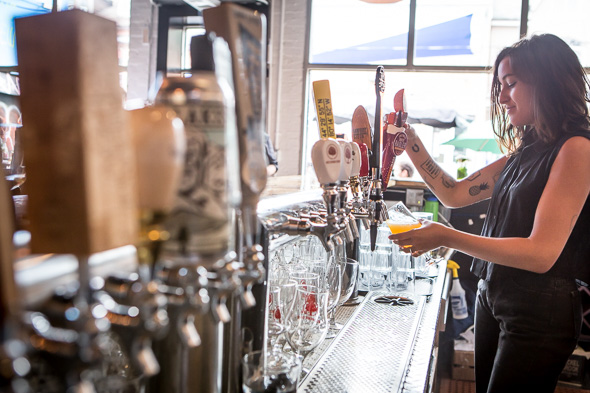 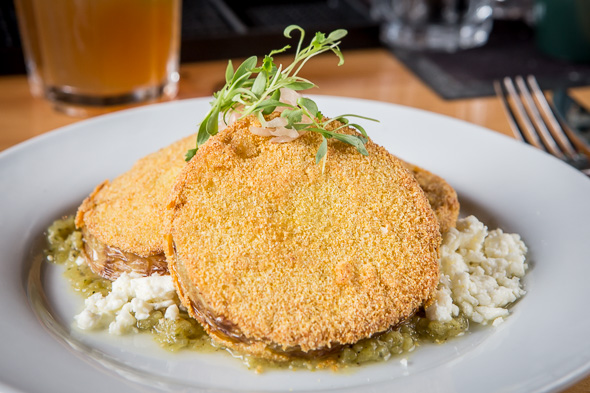 Fried green tomatoes ($8) are a menu staple featuring buttermilk-dredged and cornmeal-crusted slices of unripened tomatoes. They're deep fried golden then served with green tomatillo salsa and queso fresco. It's a lovely dish - sour and nutty all at once. 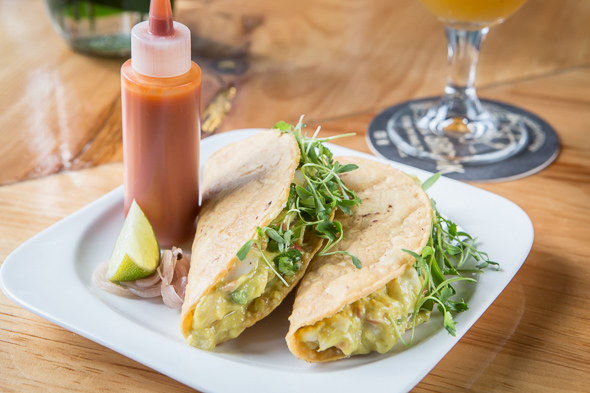 Next up, the ceviche taco ($12) is two hard shells packed with a citrus-spiked medley of albacore tuna, bay scallops, avocado and grapefruit. The supple fish and crunchy tortilla are a match made in heaven and unexpectedly easier to eat than the open-faced tostadas that are popular on menus throughout the city. 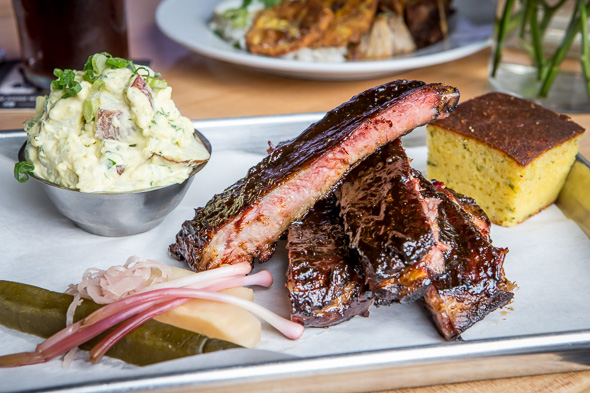 Kansas City style ribs ($16) are a complete meal at a commendable price tag. The ribs themselves are smoked until the meat pulls easily off the bone. They're finished on the grill and painted with a molasses and tomato based sauce that is sweeter than versions I've had elsewhere...saucier too.

Cornbread, creamy potato salad and assorted house-made pickles (including the last of this season's ramps) complete the dish. 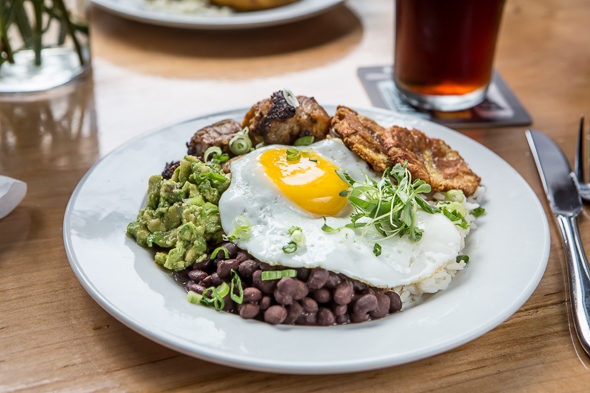 Last to the table is the pork and beans plate ($13), a Venezuelan dish that makes for a satisfying entree at dinner, but is equally desirable at lunch. The plate is packed to the max with rice, beans, deep fried plantain, avocado, and slow smoked pork shoulder , then the whole thing is blanketed in a fried egg that sauces everything once the yolk is broken. 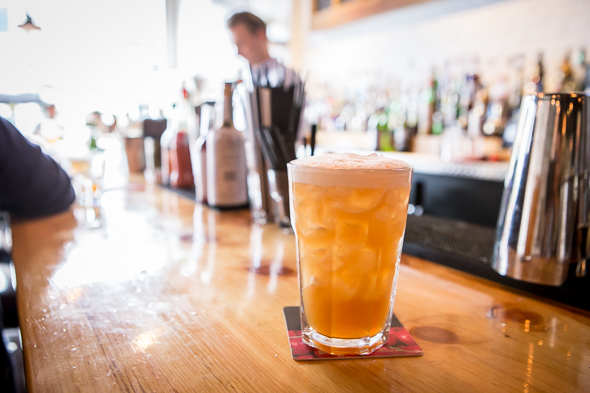 At the bar you'll find a list of $12 cocktails including classic summertime libations like margaritas and rye-spike lemonade, plus original mixed drinks like the Shade of Earl Grey, which features a refreshing combination of black tea and bourbon. 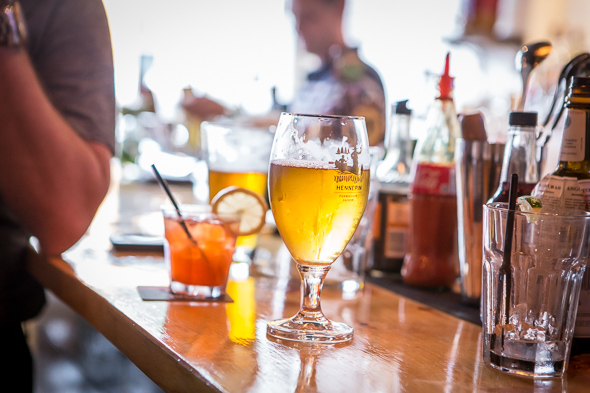 The selection on tap is always rotating but Ontario brews are well represented - for now there are 20 selections but that's set to double in the coming months. Pints start at $7, though half pints are available on request. 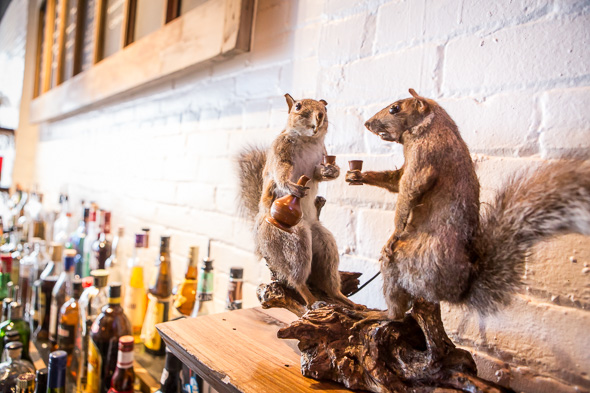 The front patio populated with picnic tables at Trinity Common is perhaps the biggest attraction - it's been at capacity every time I've walked by in recent weeks. Fear not if you can't score a seat though - inside is just as convivial. 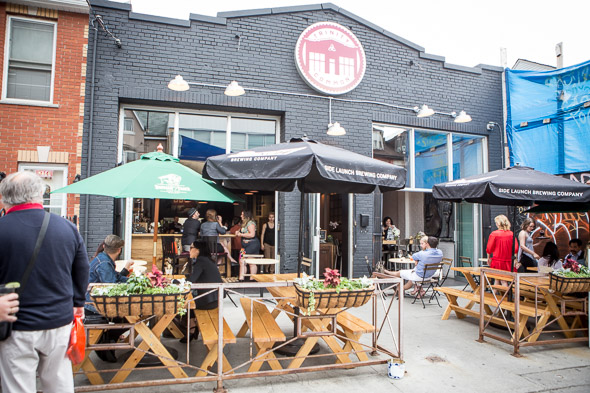