Indar's Roti and Doubles is open for takeout and delivery. A maximum of five people are allowed in the store at a time. Masks are mandatory. There are floor markers and hand sanitizer at the entrance and counter.

Indar's Roti and Doubles specializes in West Indian food like Trini doubles and fully stuffed roti made from scratch, and traditional fish and veggie dishes.

Set in a small plaza on Albion Road, the storefront shares a parking lot with a few other restaurants and shops including a Caribbean grocery store. People have been lining up for homemade roti and doubles at this spot for years, first as Lena's, and now Indar's for the past decade. 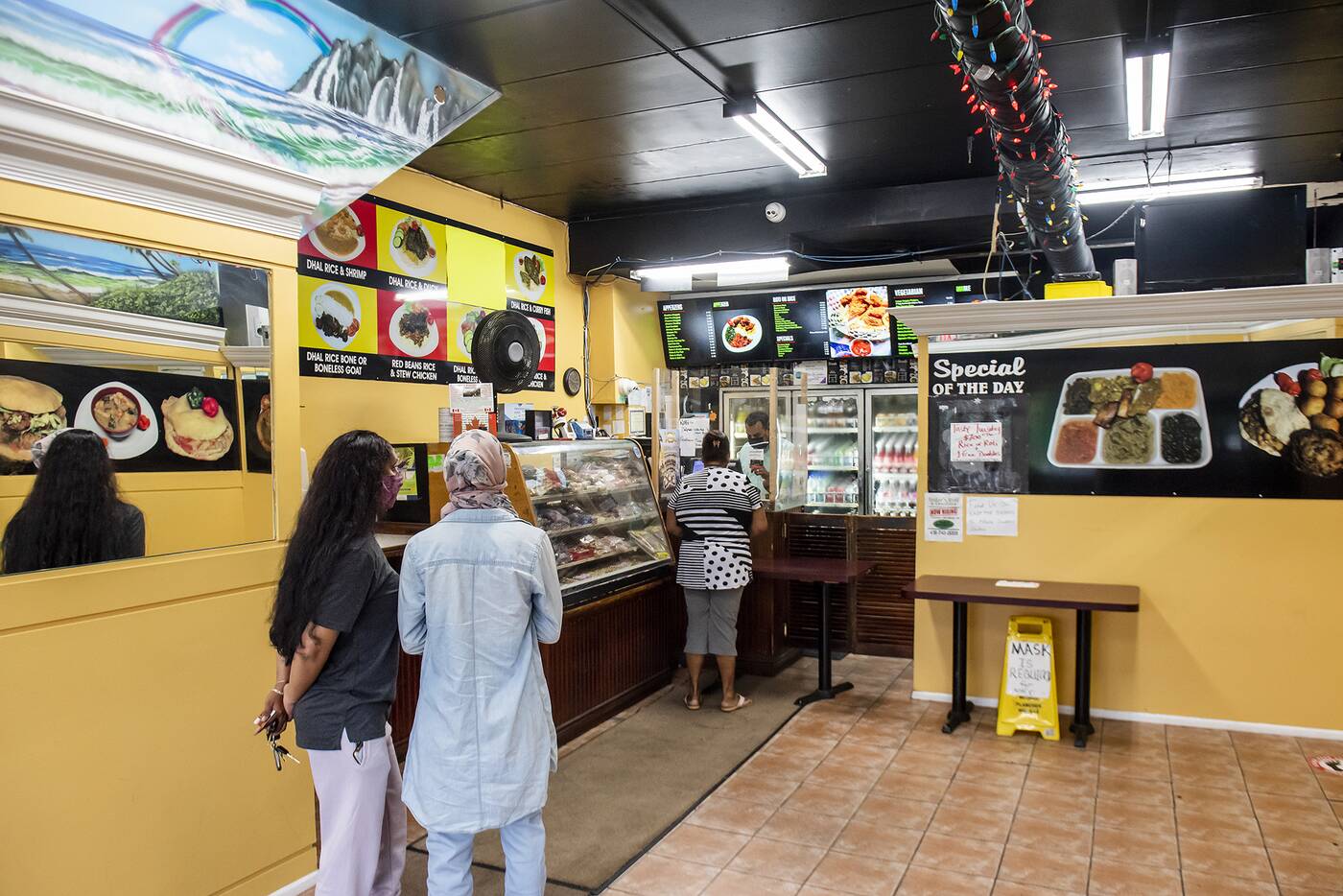 Indar's is a family affair with the namesake of the place, Indar Rampersad, and his wife, Sandra, running this location while their son, Narin, and his partner take care of business over at the second Woodbridge location. 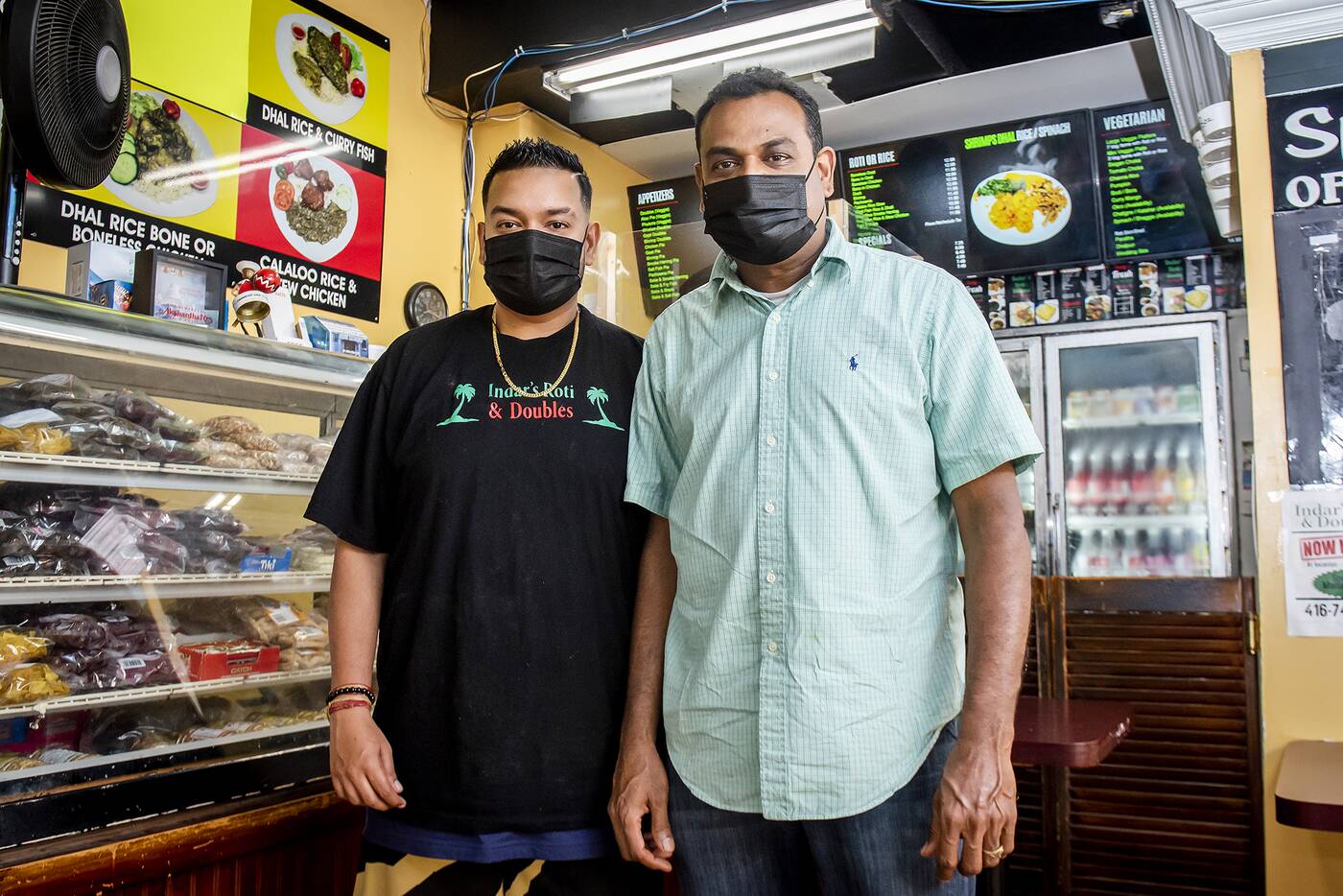 The restaurant originally opened in Trinidad around 40 years ago, before the Rampersads moved to Canada and picked up business out of this Etobicoke plaza. 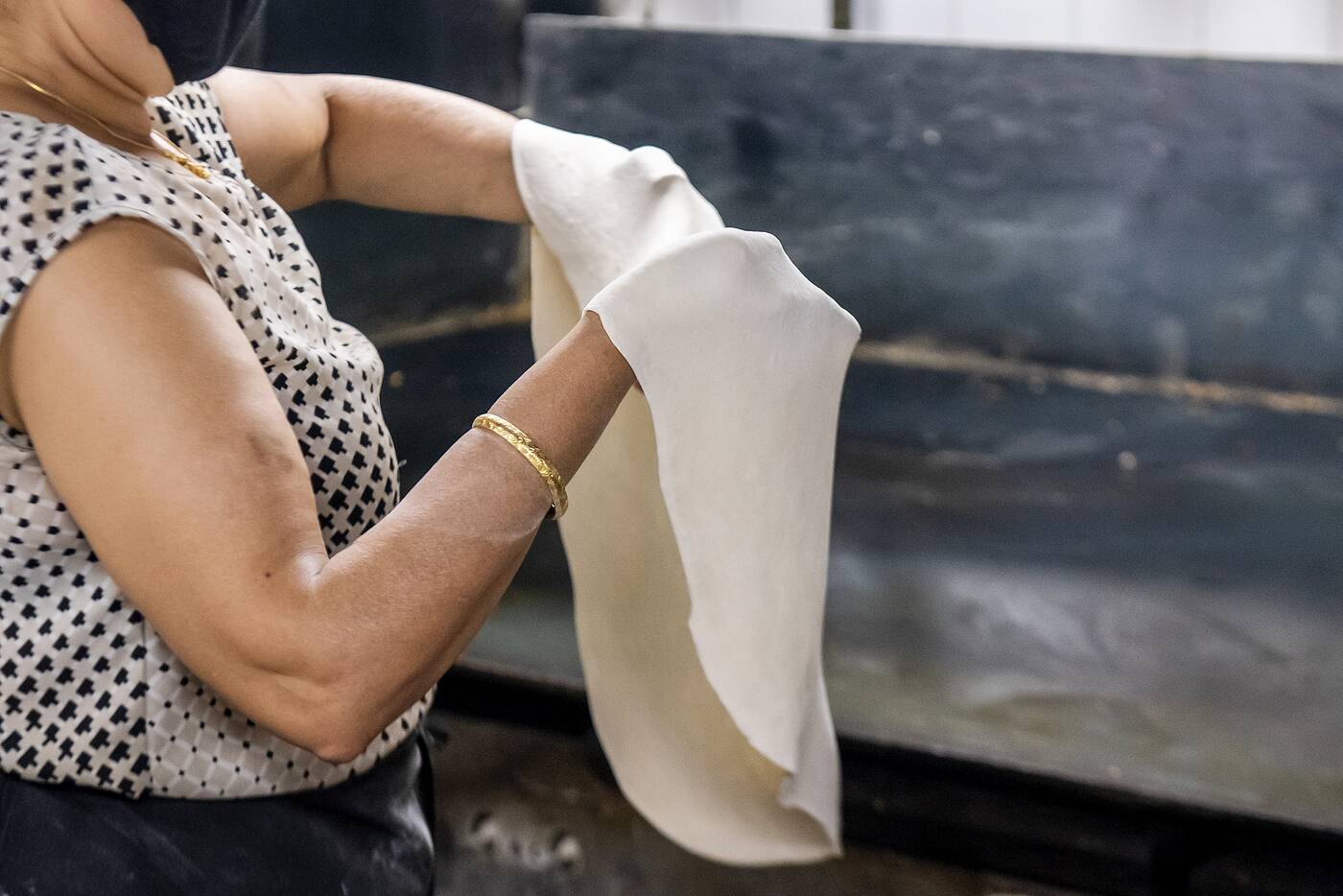 Everything that comes out of the kitchen is handmade throughout the day. This goes for the two kinds of flatbread for the roti: plain paratha and dhal puri, which are stuffed with ground and seasoned yellow split peas before hitting the grill. 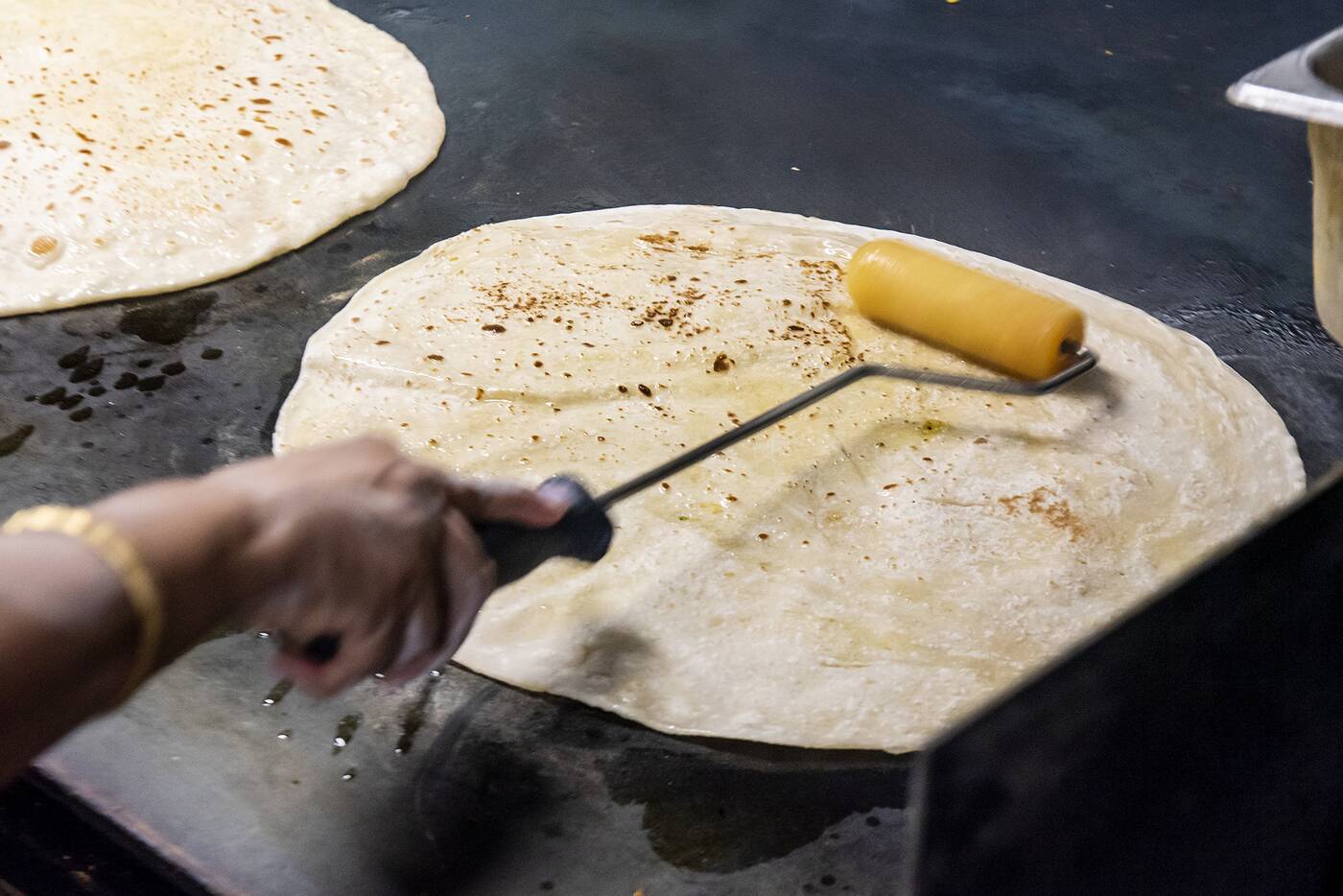 Both flatbreads, which come in small and larger sizes, are rolled by hand and tossed in the air, a bit like a pizza, to achieve just the right thickness. They don't stay on the grill for long, only until the exterior becomes lightly grilled and it puffs up like a blowfish. 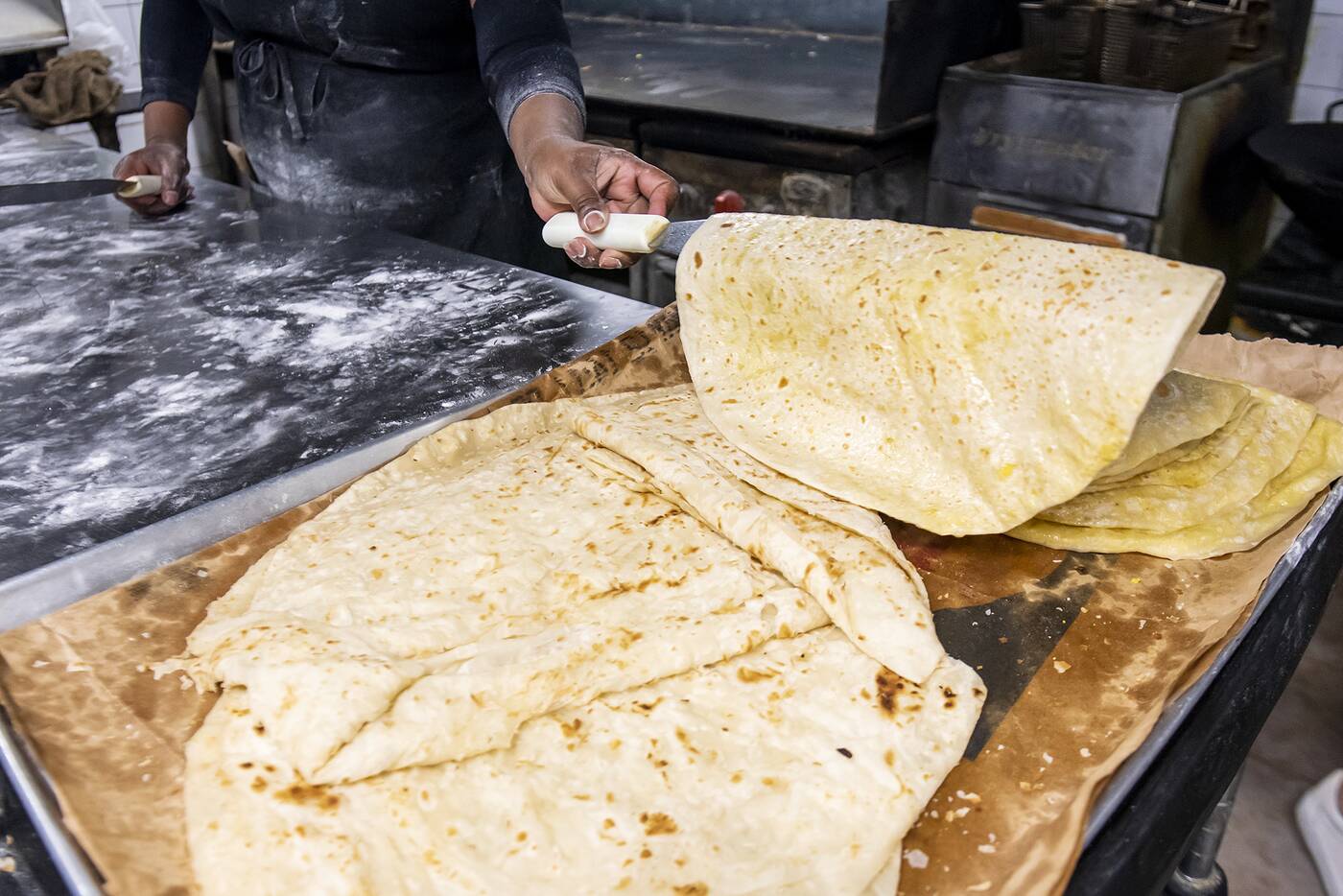 The paratha is sweating with moisture when it comes off, which Sandra tells me is what they're looking for every time. Flatbread this moist can be hard to come by. 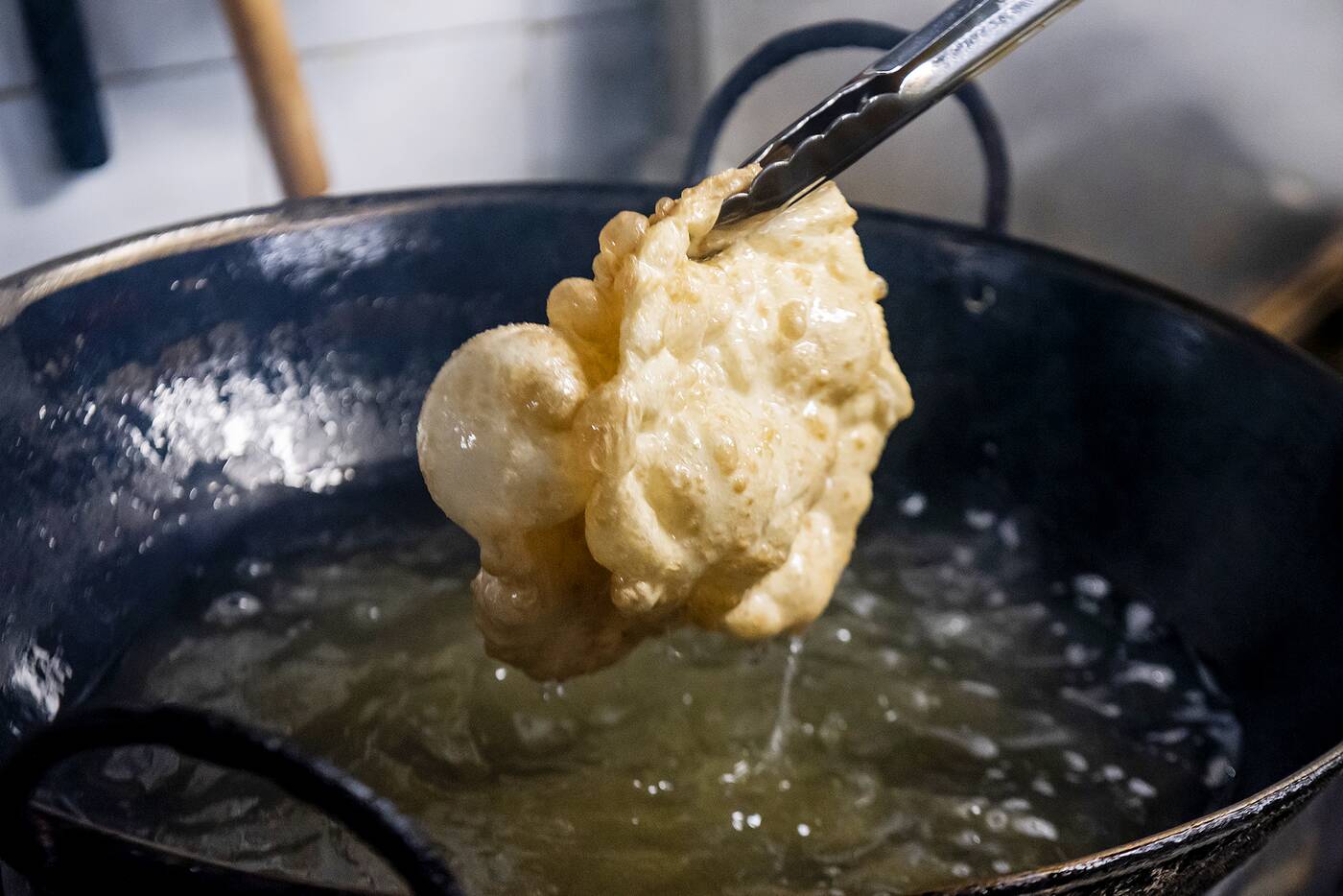 Small rounds of dough are also rolled by hand and dipped into the fryer for the bara right before they're topped with a curried chickpea filling. 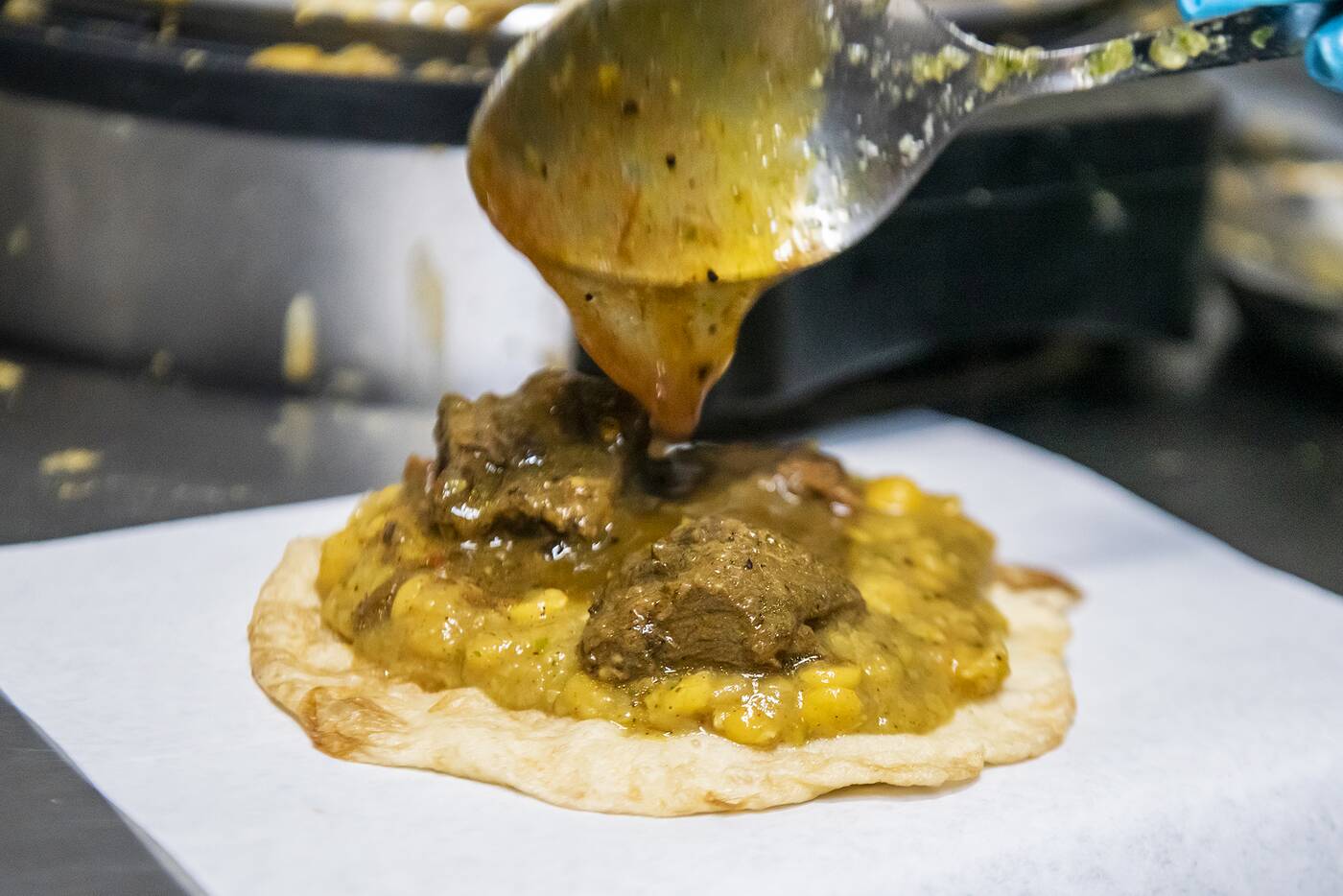 When it comes to the doubles you have your choice between chicken, goat or shrimp ($3.99). The most typical way it's eaten in Trinidad, however, is with no meat and the ever flavourful channa as the main attraction ($2.35). 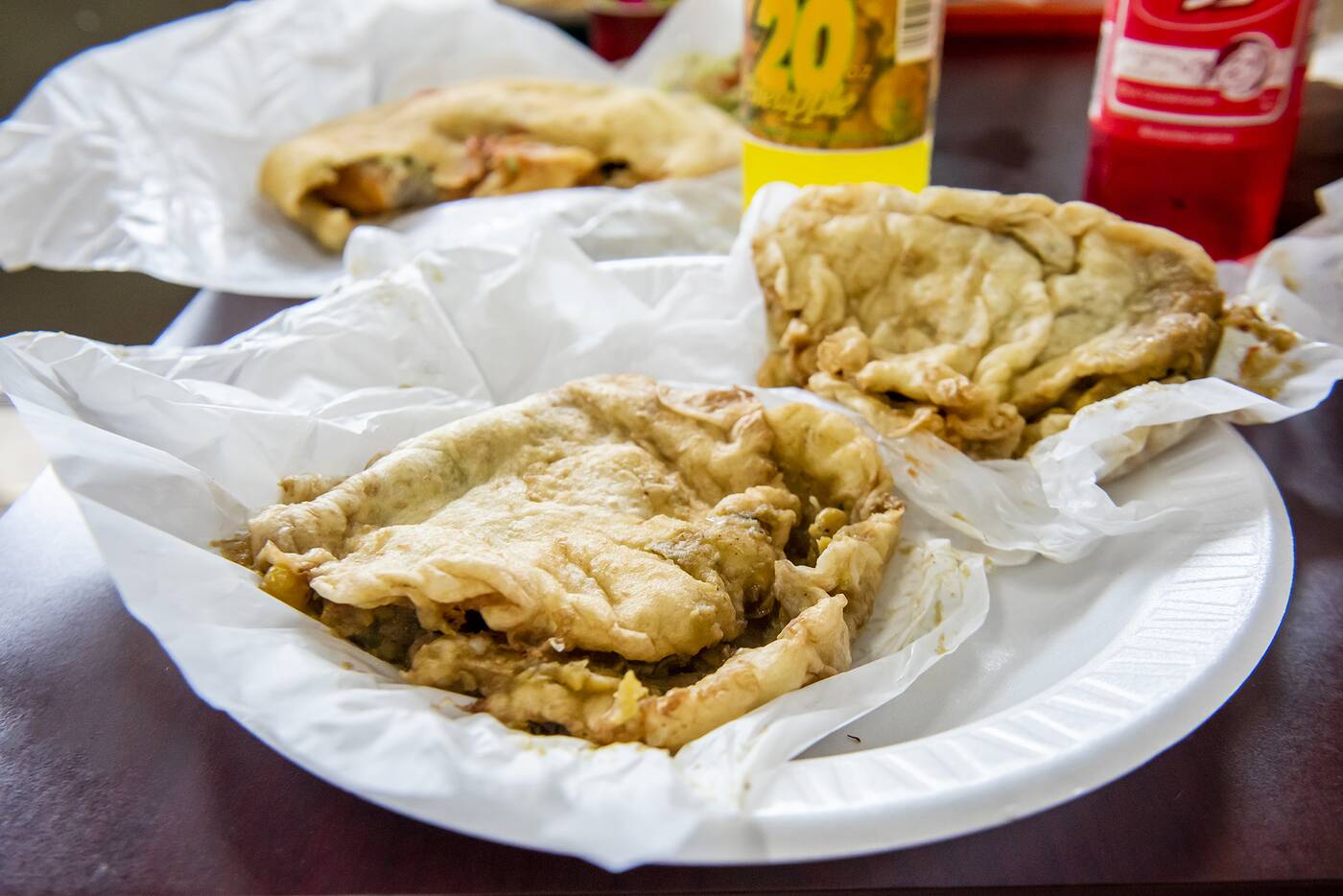 A mix of chutneys including tamarind, cucumber, pickled mango and chadon beni or culantro, which tastes like a slightly more pungent cilantro, as well as a house-made hot sauce, make for a nice combination of sweet and spicy flavours. 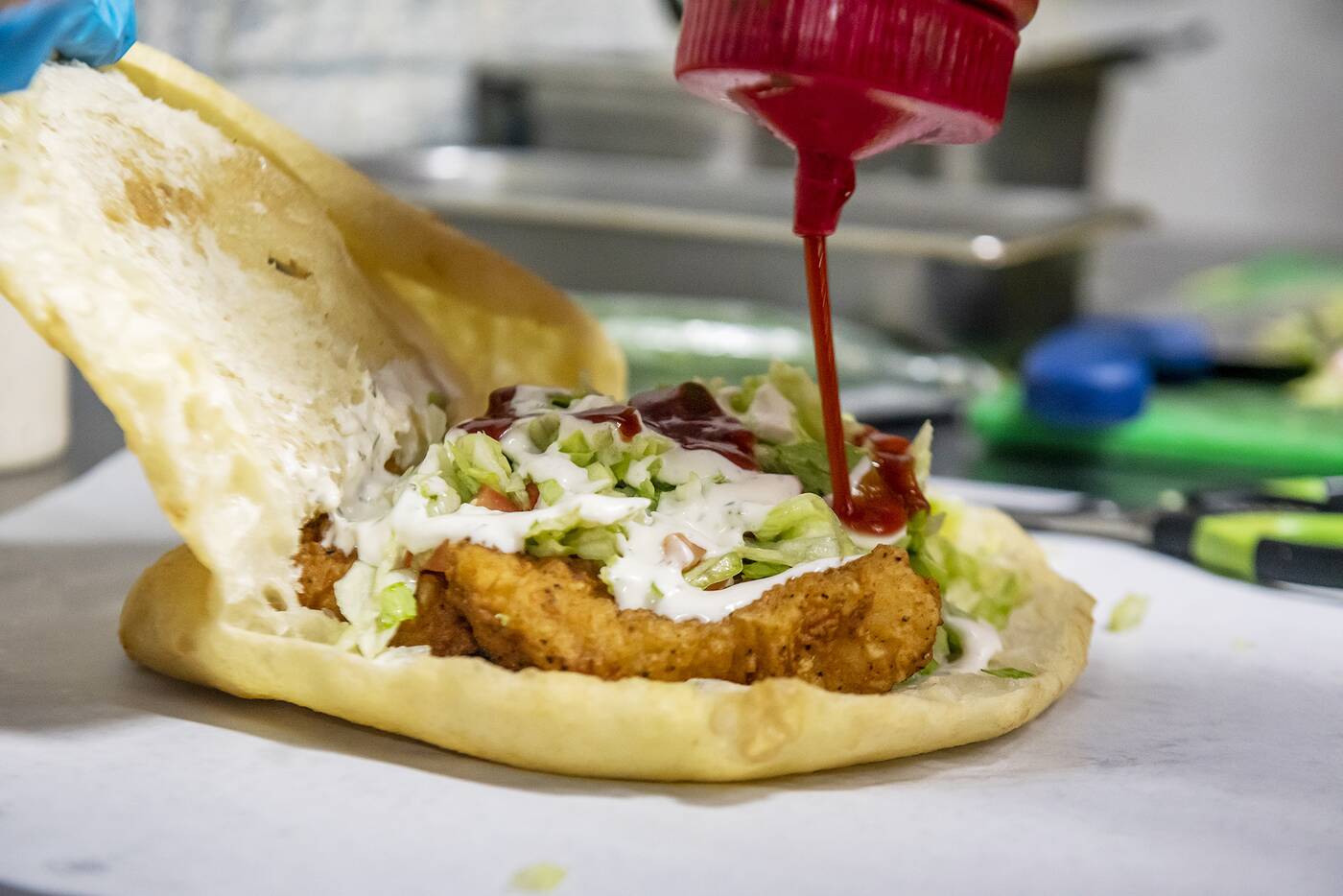 Another popular Trinidadian street food made here is bake and shark, which is most widely associated with Maracas beach on the northern coast for its abundance of bake and shark stands. 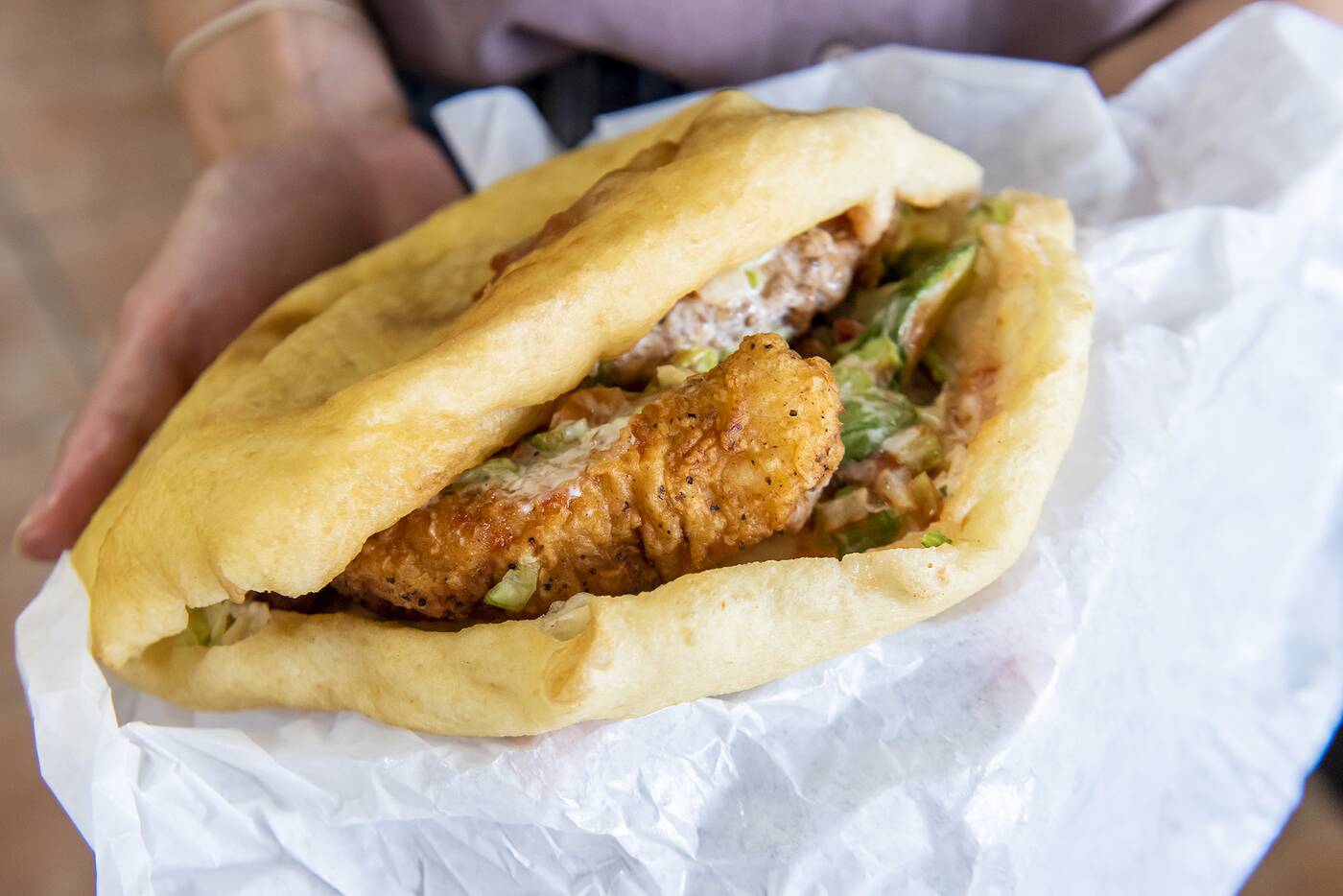 Although the pocket sandwiches there come stuffed with shark caught right on the beach, here it's substituted with a breaded bassa fillet ($8.99). The fish and salad between the fried pita are topped with ketchup and an in-house garlic sauce, the best way to enjoy it. 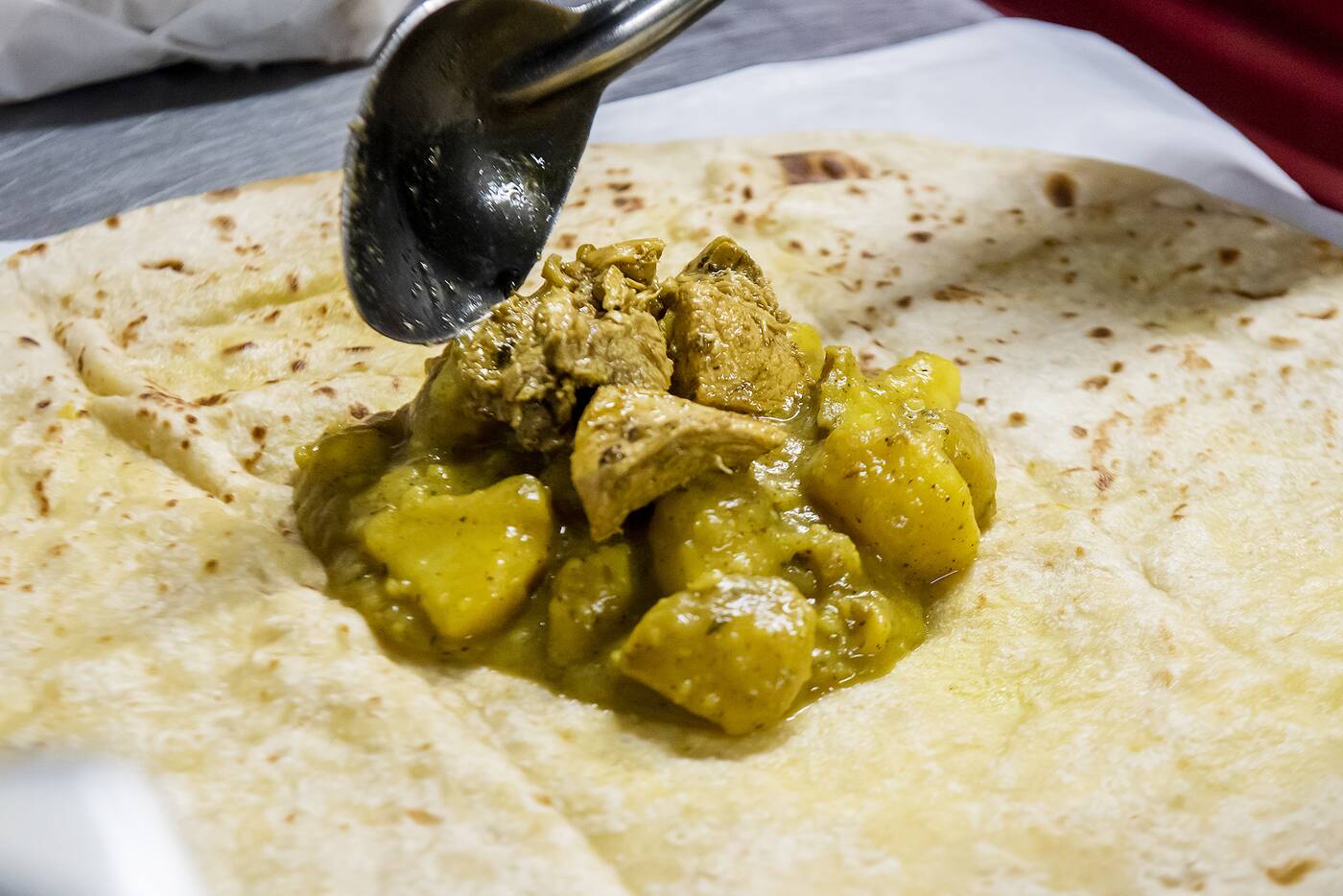 If you're in the mood for roti, the best time to visit is Tuesday, when you get it for just $7 along with one free double. A large piece of either paratha or dhal puri can be filled with either chicken, goat, shrimp or veggie. 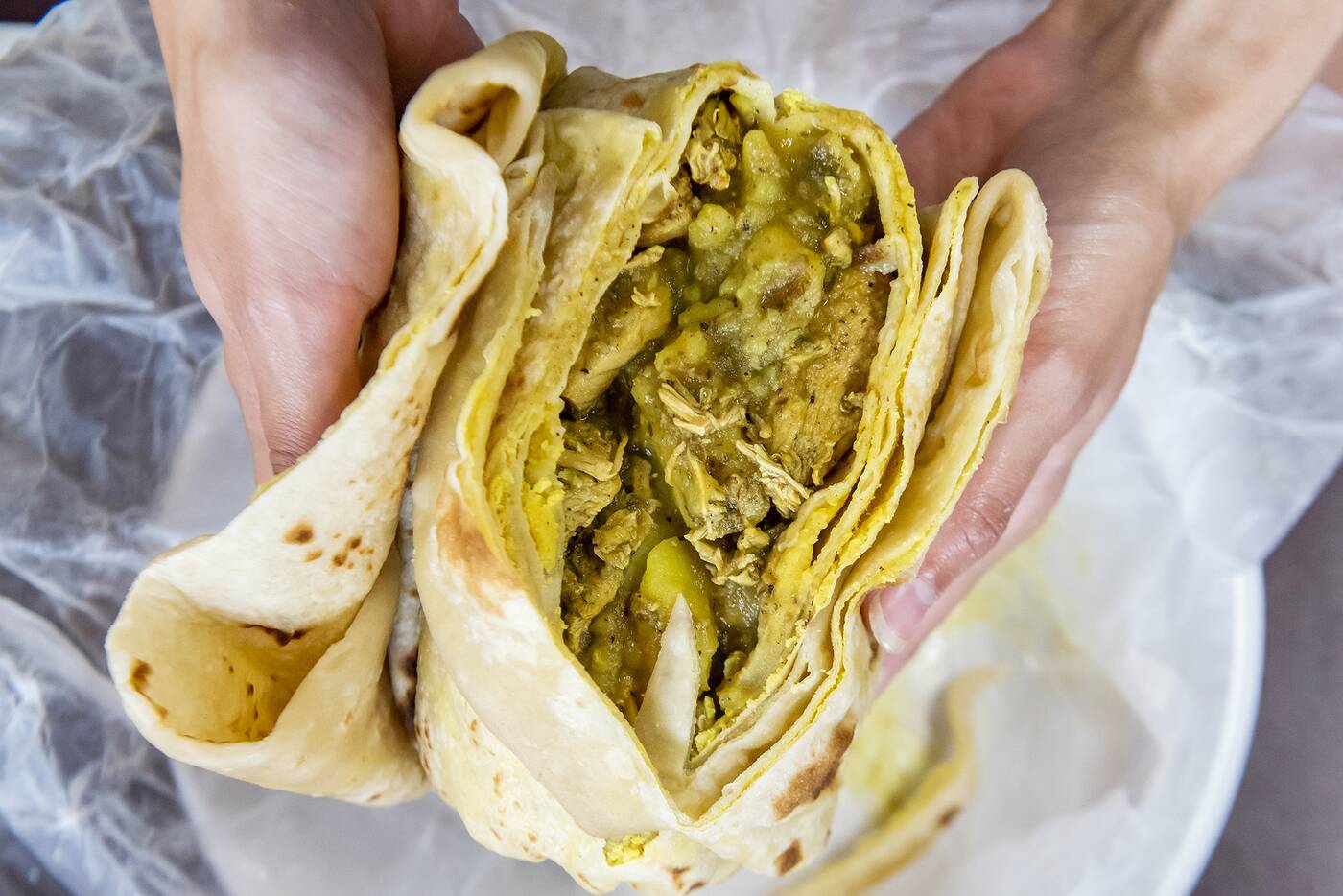 I'd highly recommend the boneless chicken and dhal puri combo ($10.99). The meat is tender, the curry potatoes are well-flavoured, and the fluffy flatbread it's wrapped in does a good job of balancing the heat. 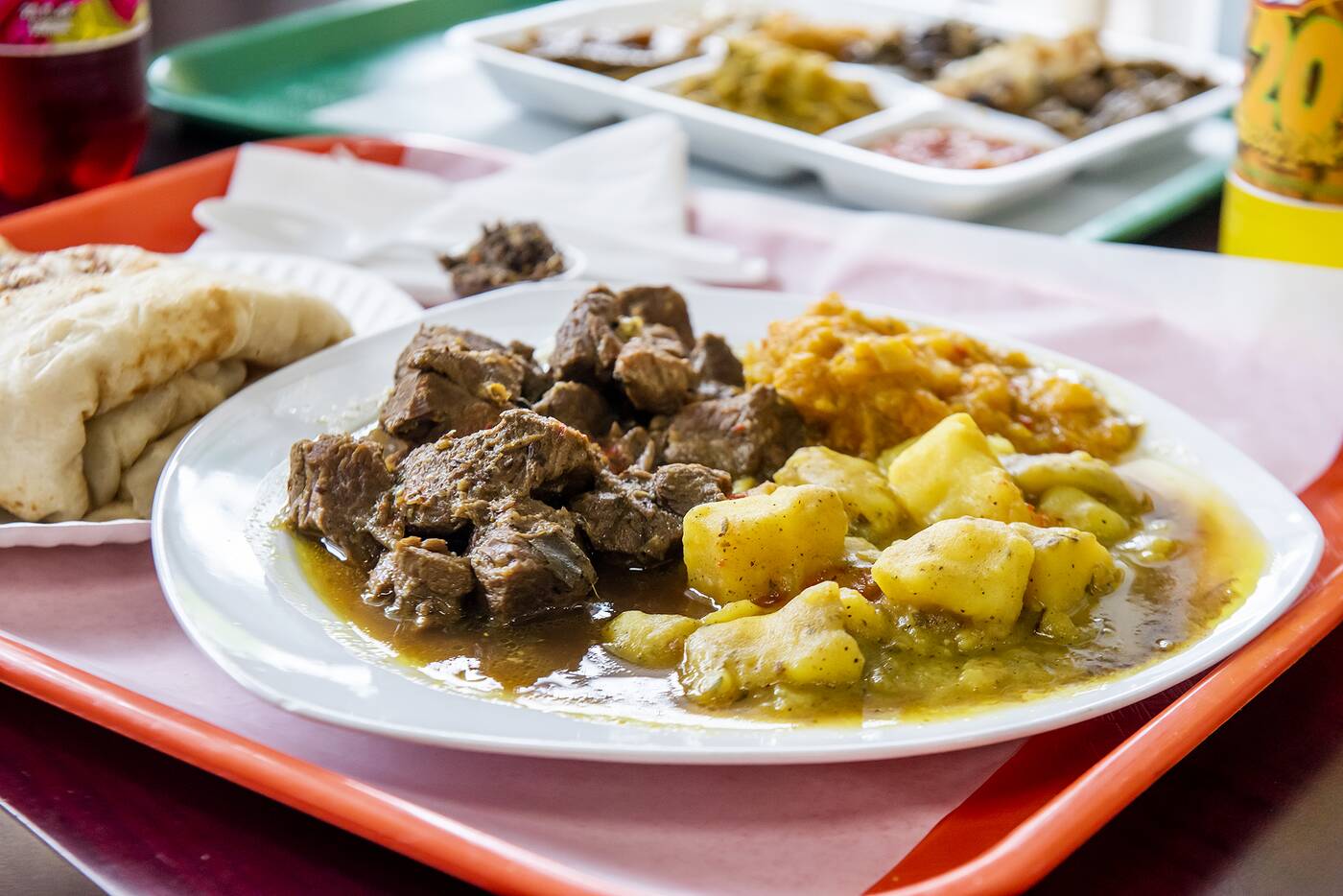 If you're more of a meat and potatoes out of the roti type, there's the boneless goat ($11.99) with mashed pumpkin and curried potatoes, all slathered in a thick sauce. 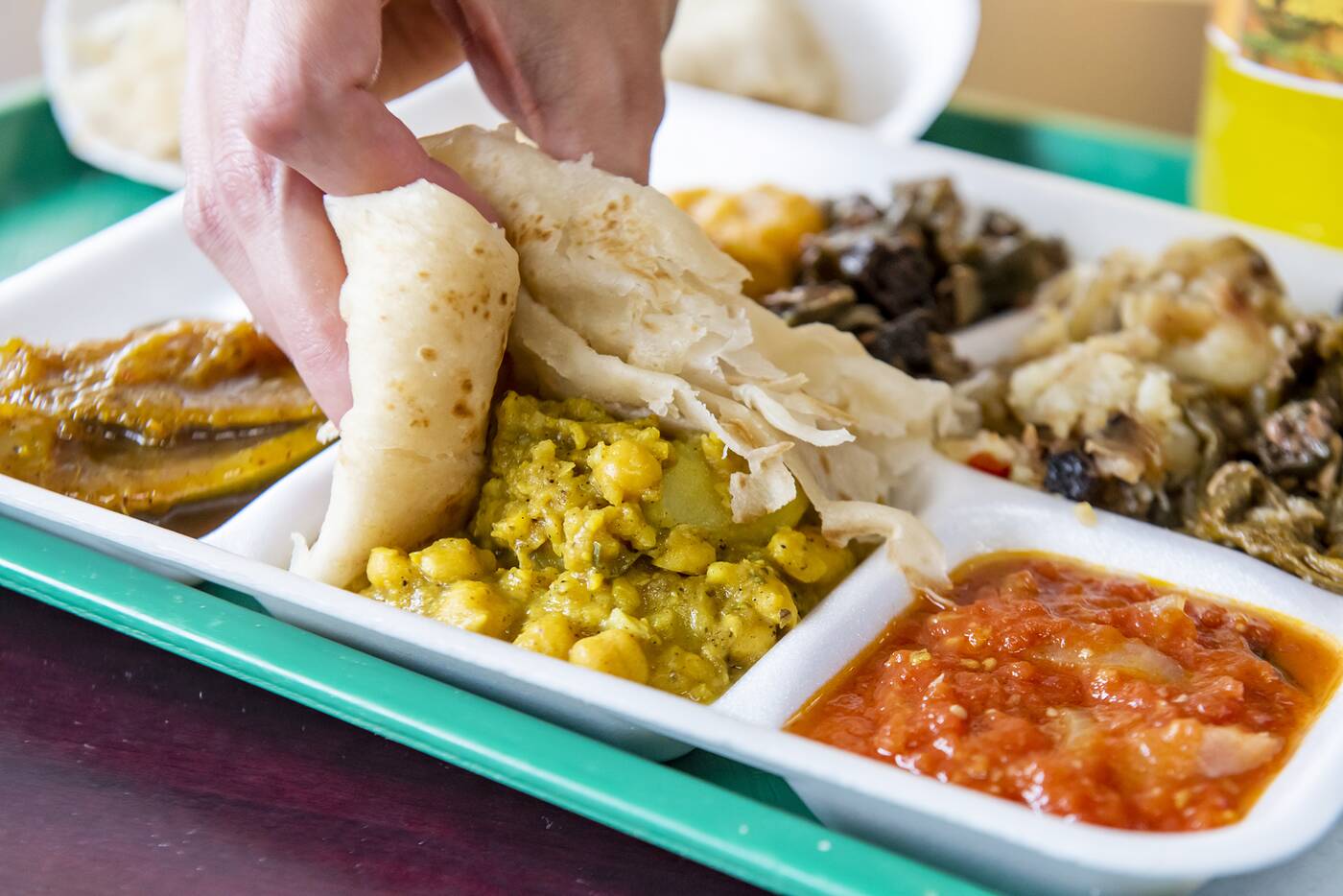 The mini veggie plate ($7.50) will get you a selection of sides that are all vegetarian-friendly including pumpkin, roasted eggplant, roasted tomato, channa aloo, spiced spinach, okra and curry mango, which is both sweet and spicy.

The pumpkin, channa, and roasted eggplant and tomato are a few that stand out among the rest. 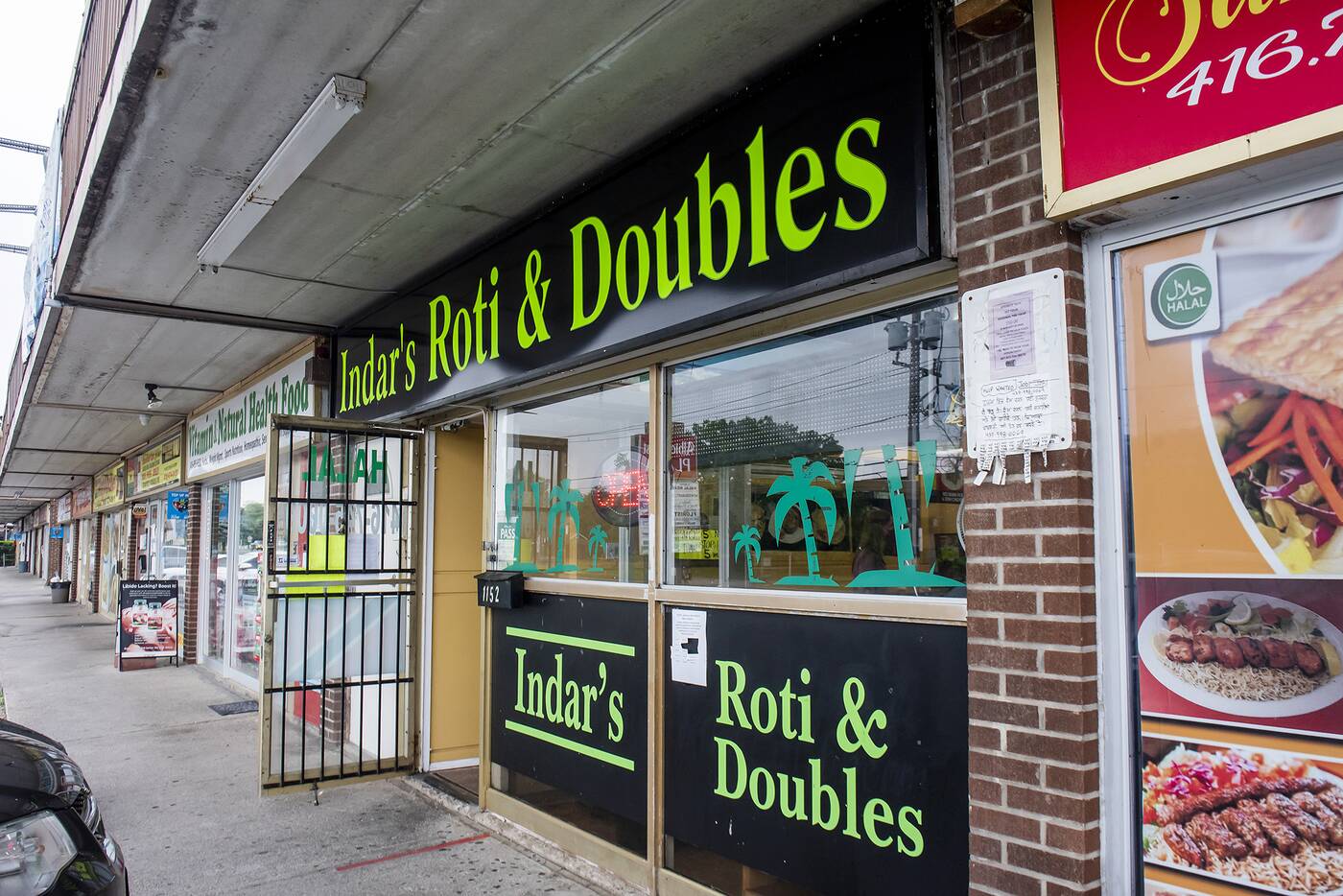