When it comes to roti in this city there's plenty of options. Normally when I'm anywhere near Parkdale I'll opt for Bacchus but as they were unexpectedly closed earlier this week, I wandered down the street to Ali's West Indian Roti Shop which despite what the vinyl sign out front would have you believe, this place has actually being around for a while.

Ali's is one of those restaurants that puts photos of the food on the wall behind the order counter which seems like sort of a bizarre move as the pics don't look too appetizing. But as I later found out the photos are somewhat true to form. The chicken paratha roti my friend ordered was delivered as above. Little chunks and bits of chicken and potato drowning in a pool of gravy-like sauce on a paper plate. Yum. 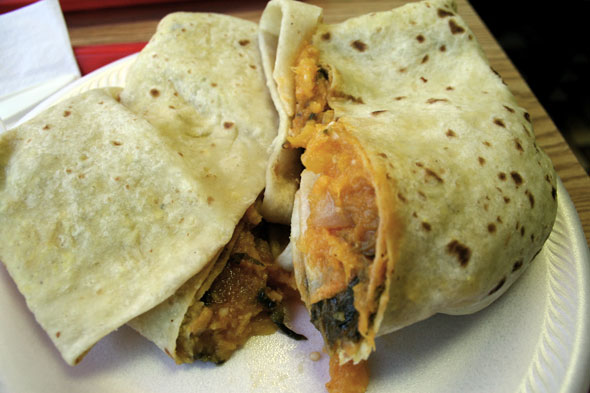 I played it a bit safer and ordered a veggie roti straight up. It was filled with spinach and squash which was the recommendation from the guy behind the counter, and incidentally one of the usual combos I get at Bacchus.

There's plenty of seating inside the restaurant and we managed to score a two seater by the window. This allowed us to catch a drug deal in action.

Back to my roti. On first appearances (below), it didn't appear to be a winner. The filling was really runny, even more so than what I'm used to at Vena's on Bloor. But surprisingly the taste was pretty good and I had no problem finishing the whole thing.

Overall, Ali's West Indian Roti Shop isn't bad in a pinch. The service is fast and friendly and the food tastes better than it looks. But given the roti options in this city - and the fact that Bacchus is just down the street - I can't think of too many reasons to make a return trip.