I'll Be Seeing You

I'll Be Seeing You is what's in the former home of 747 and prior to that, PicNic , both former wine bars in Riverside . Co-owned and run by two sisters, Natasha and Vanessa Smardenka, this spot focuses on craft beers and cocktails more than vino.

They named this place after this song , which they thought would make a great name for a snack bar (it does). When we visit, the tunes played are a continuous soundtrack of crowd-pleasers, covering everything from the The Jackson 5 to The Killers. 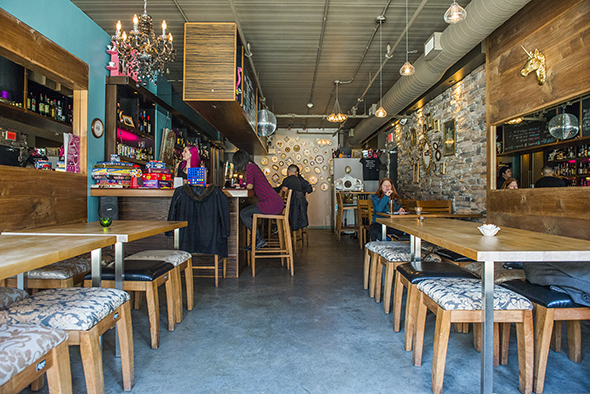 Inside, the decor is an eclectic mish-mash of funky finds that the Smardenkas describe as "whimsical fairytale madness," consisting of a disco ball, small painted portraits of animals dressed like Victorian characters, and a golden unicorn head, to name just a few items. It actually all comes together remarkably well, with a range of seating for 40 on couches, at various tables or at the bar. 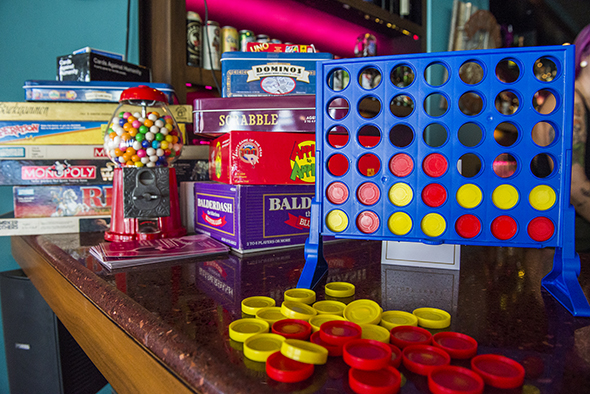 As for amusement, the place is stocked with classic games like dominos, backgammon, Operation, Balderdash and, my personal fave, Connect Four. There is also a cheeky "missed connections" board set up near the bathrooms, so that patrons can communicate their interest with each other in writing instead of talking. 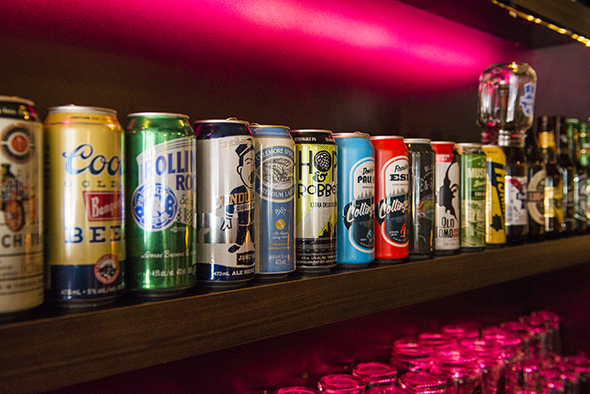 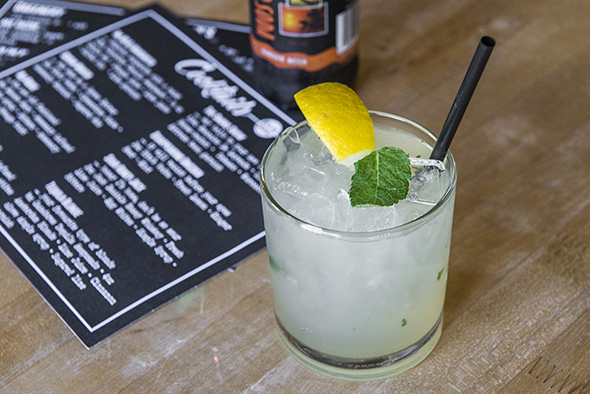 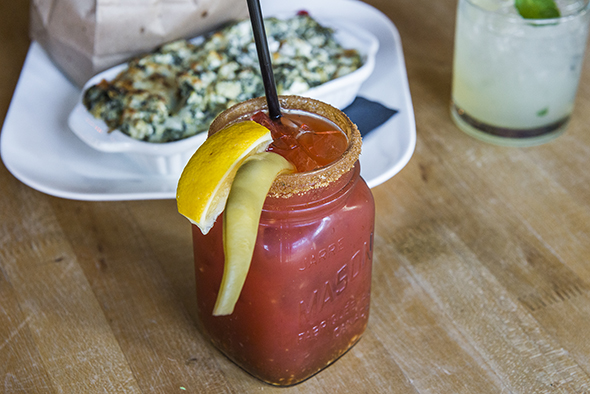 A personal fave of mine is The Smoke Show, which is the bar's take on a Caesar, except Mezcales de Leyenda, a Oaxacan mezcal, replaces the usual vodka, adding a new smoky dimension to this spicy drink that makes so much sense I think Caesars should always be made this way from now on.

Eats-wise, there are shareable apps and mains (accompanied by helpful suggested beer pairings on the menu) that make for simple yet effective bar food. 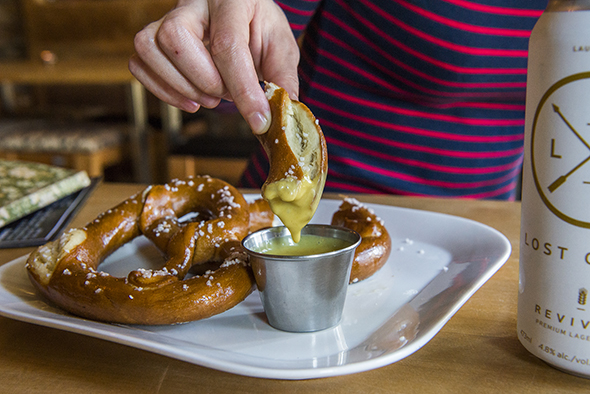 We try some snacks, which, like the drinks, have fun, irreverent names. There's Do the Twist ($6), two baked, salted, soft pretzels that come with a house-made honey-mustard dipping sauce. 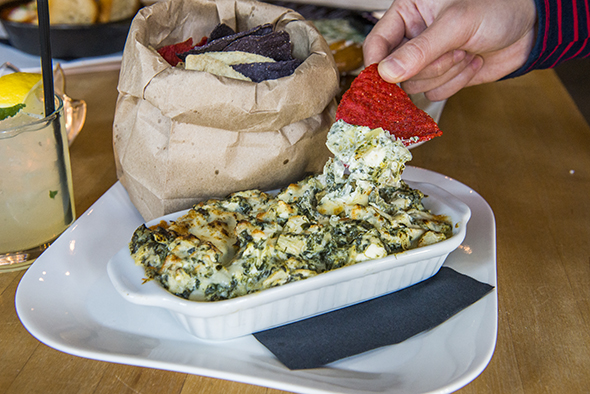 I also enjoy the Take A Dip ($10), an impossible-to-dislike creamy and cheesy combo of baked spinach, artichoke and Parmesan, served with tortilla chips in a brown paper bag. 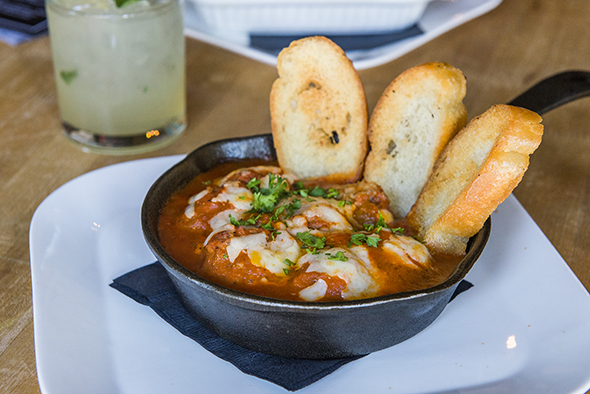 Saucy Balls ($12), one of the mains, arrives in a small cast-iron pan as seven pork-and-beef meatballs in a tomato sauce, topped with cheese and parsley, with three slices of (very fatty/oily/buttery) toasted baguette served on the side. 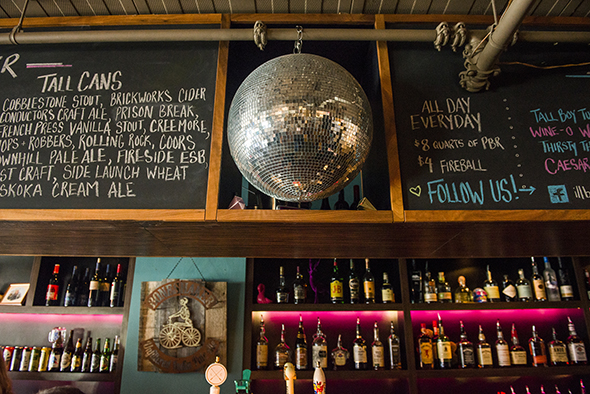 Both sisters live in this area; in fact, they fell in love with the east end so much they decided they wanted to open a restaurant/bar here together (their father used to own a place called Billy Bob's Bistro and Saloon in Bloor West Village). 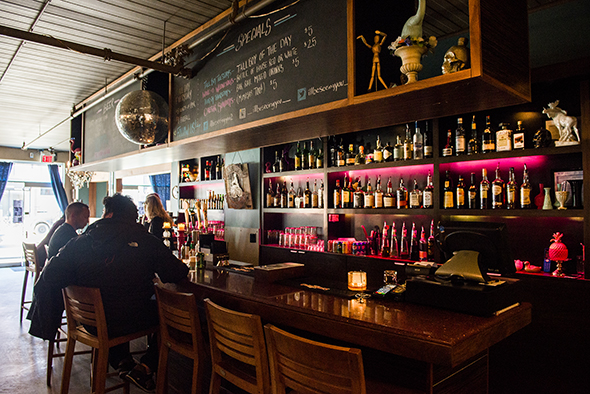 "Locals here all support new businesses," says Natasha. And this part of town will hopefully appreciate a sassy nightlife option like this. 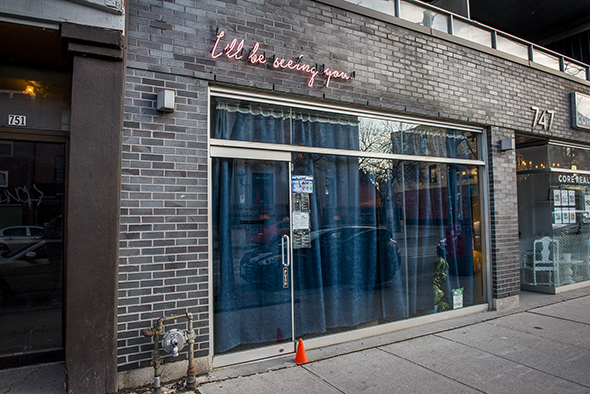