Hoosier Daddy's reminds me that sometimes the first warning sign about the meal you are about to eat is literally a sign.

Clever if slightly juvenile pun notwithstanding, Hoosier Daddy's name proclaims its lack of authenticity right off the bat. The Hoosier State, Indiana, is about 500 miles away from anywhere that traditionally makes great barbecue. This wouldn't normally be an issue if not for the proclamation that the restaurant is serving up "Toronto's best 'American Style' BBQ." It isn't, and it may not even be serving up the best BBQ sandwich at the Village by the Grange food court (try the pulled pork bao at Mean Bao ). 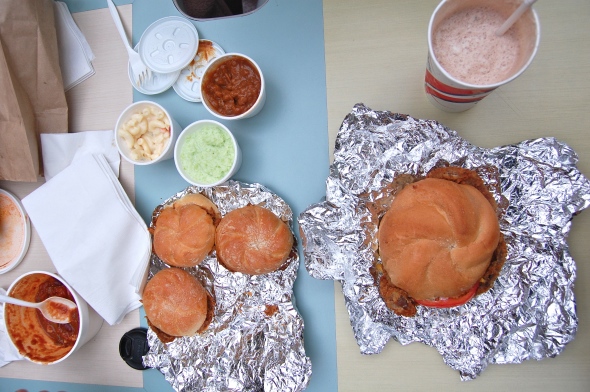 One would be more willing to overlook geographically inaccurate signage if the food were better. Occupying a tiny space with a small kitchen just off the main drag at the Grange, Hoosier Daddy's cooks its BBQ off-site then ships it in cryovaced, to be sauced and served. At some stage though something goes awry, as of the three barbecue sandwiches being served only one rises above the level of acceptable. 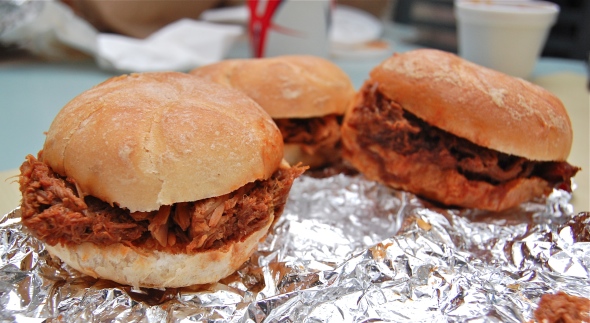 Pulled pork, chicken, and beef sandwiches are all similarly sauced, slightly sweet but not unbearably so, with a touch of vinegary acidity that adds a pleasing contrast. In the case of the pulled pork though, the sauce is doing all the work, as the meat itself is wet, chewy and devoid of much flavour. The beef sandwich is better, with meat that possesses both texture and flavour of its own (which is kind of crucial, you know). The chicken is not so fortunate, but rather a dry, stringy mess lacking in just about every fashion.

The interplay between meat and bun is one nuance that's often lost at the border, but the kaiser roll pairs well with the meat here, at least in the miniature version ($2.25 or 3 for $6). At the medium, or "tweener" size ($4.50) the mediocre meat predominates, and I didn't have the heart (or stomach) to try out the large (daddy's big one, $6.95). Optional hot peppers and/or pickles are a nice touch, at least. 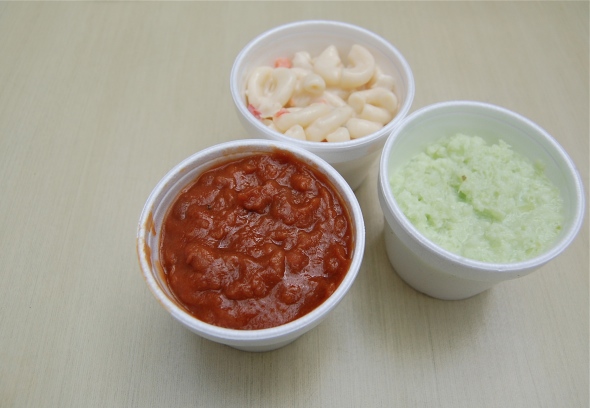 Sides ($1.25 for a small dixie cup) are also a mixed bag, with a macaroni salad that tastes exactly like a macaroni salad being the best/most edible of the bunch. Coleslaw is shredded within an inch of its life and takes on an iridescent green hue that can't possibly occur in nature, not dissimilar perhaps to atomic waste, while baked beans are sweet and smoky and possess the mushed consistency of baby food. Chili ($4), available in turkey or vegetarian, is no better - soupy and tasting strongly of vinegar, and lacking in depth, spice, flavour and meatiness. 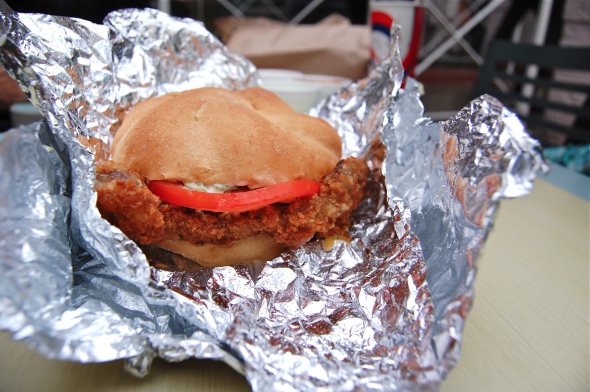 A fried pork tenderloin sandwich ($6), a dish Indiana is actually known for, is about the only redeeming main on the menu (mini beef sandwich aside). The crispy and freshly battered tenderloin is topped with cheese, tomatoes and greens and oozes a mayonnaise based sauce. It has some heft to it and is better while hot (true of most fried sandwiches), so make sure to eat it while it's fresh. 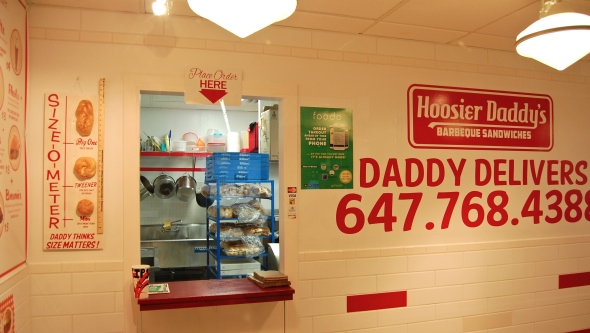 It can be hard to find good, authentic barbecue in Toronto, and unfortunately Hoosier Daddy's does little to change that. The plan is to open more restaurants, but Daddy would be well served by righting the ship at the flagship store first. At least they make a good chocolate malt. 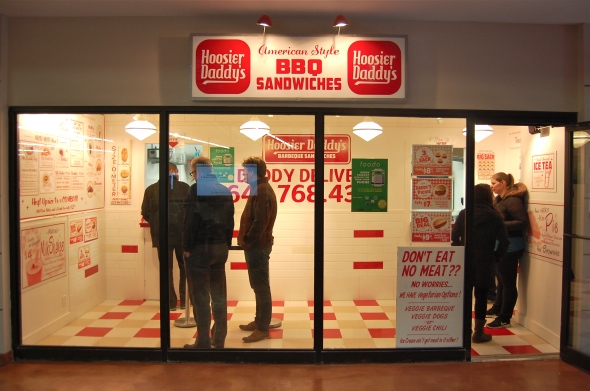