Go Topoki is one of the first restaurants in Toronto to serve the Korean street food it’s named for. Topoki is made up of tube-shaped rice cakes with some flat fish cakes mixed in, most typically served in a sticky neon red sweet and spicy sauce.

The restaurant only holds about thirty, but the ceilings are high and the eye is drawn upward by elongated light fixtures dripping from the ceiling. 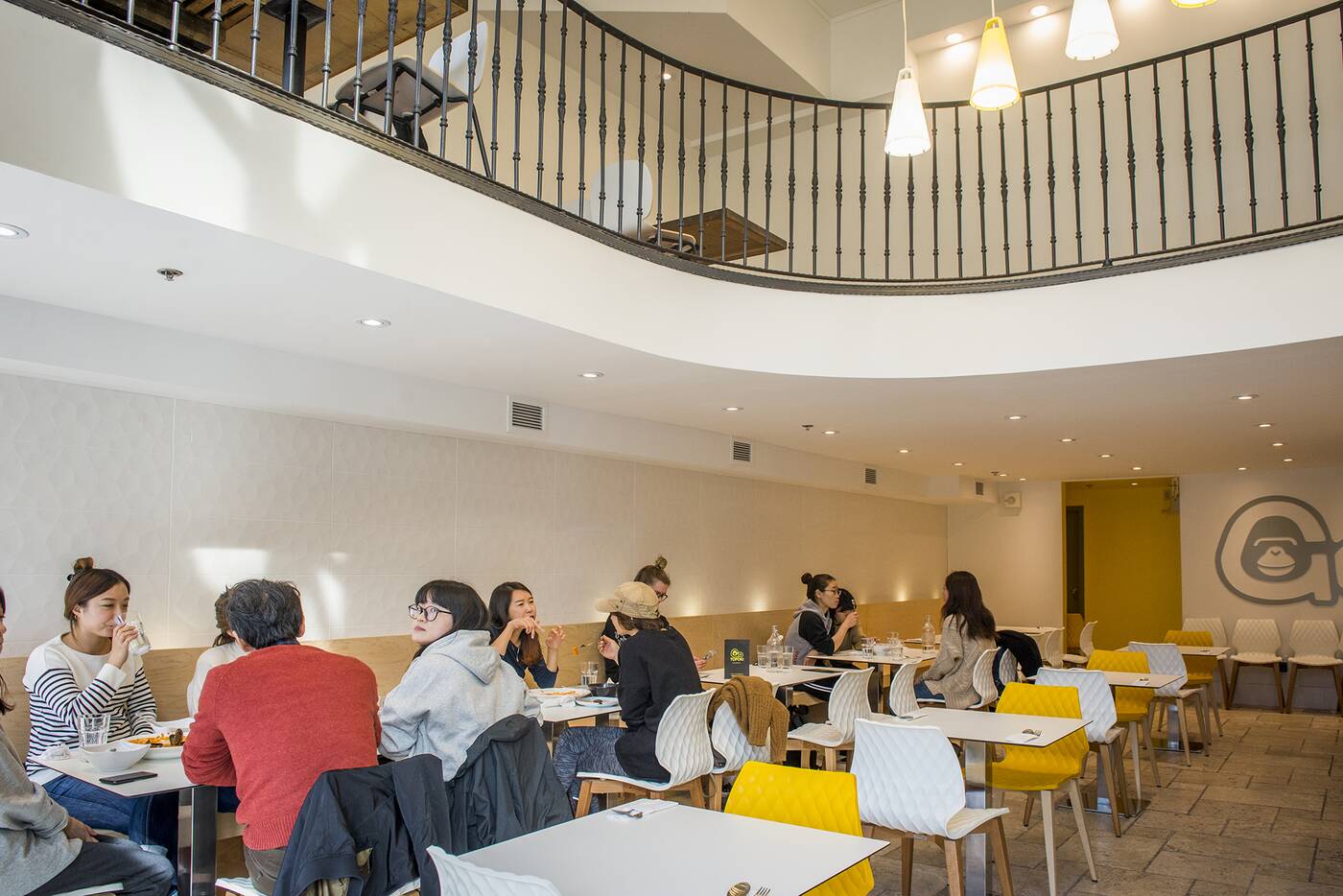 All white and yellow, everything is cute, minimal, and cheerful right down to the forks and spoons with faces on them. 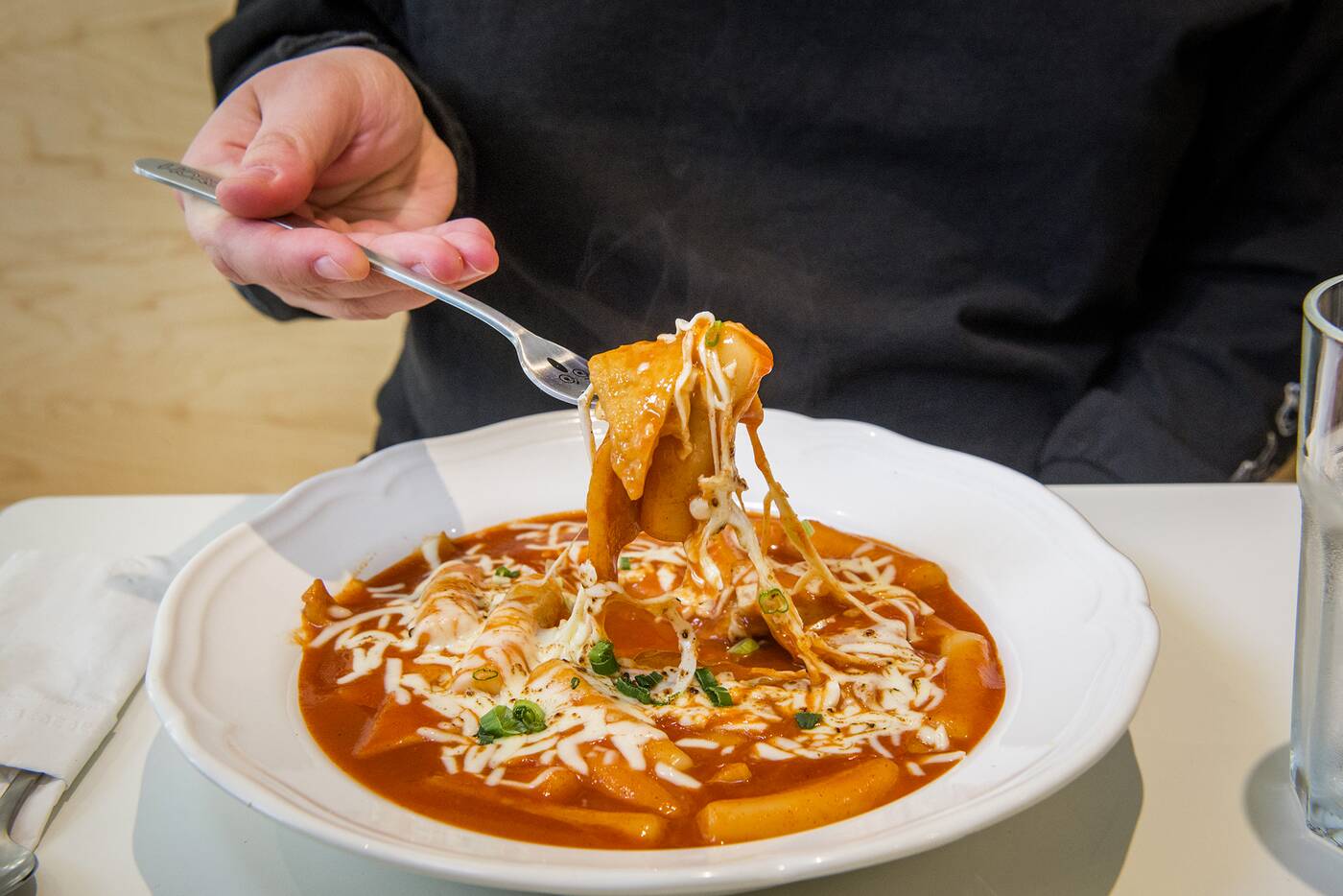 This street food is basic but customizable, with the option to add cheese or glass noodle toppings to any topoki for a $2 upcharge, as we do with our regular red topoki ($8). The sauce is indeed very spicy, but the chewy, bland rice cakes need it. 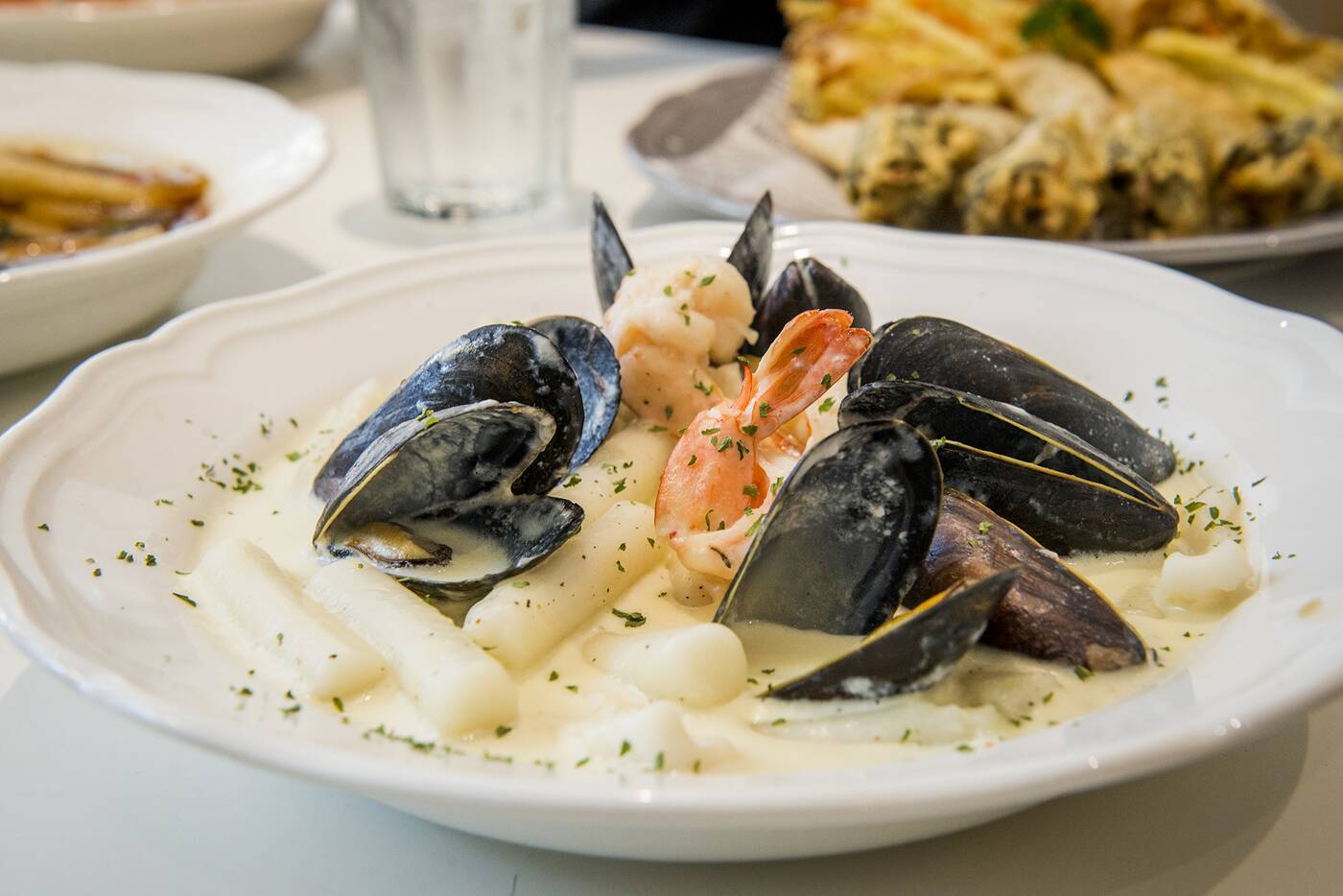 White topoki dressed with cream sauce has apparently become popular in Korea more recently. The cream sauce base comes with an option of bacon ($10) or seafood ($13), and the impression is sort of that of an alfredo pasta dish, the cream and seafood adding a lot of flavour. 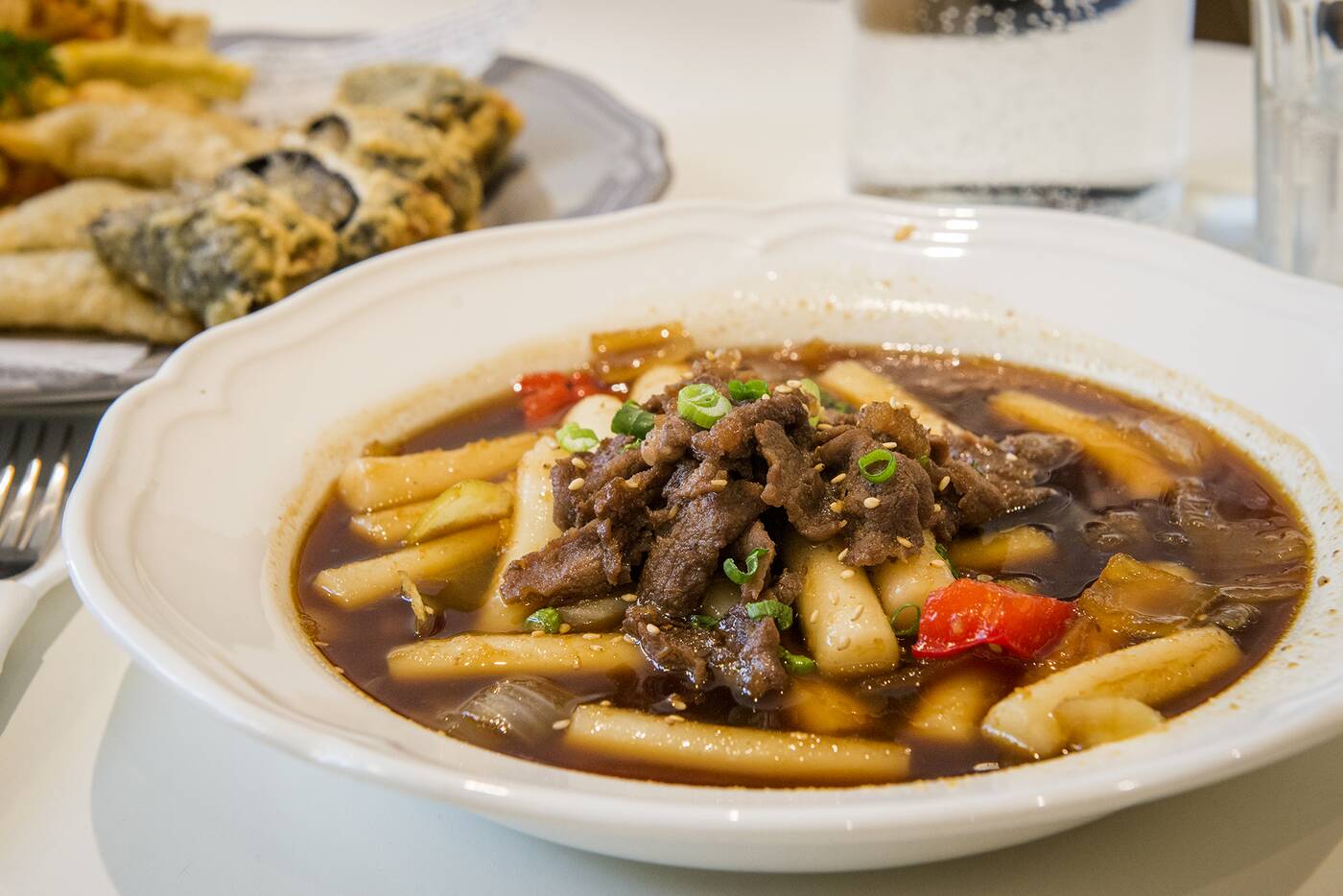 Brown topoki ($10) is really just a bulgogi flavour, only in one option on the day of my visit. No others are needed though. It’s less spicy but the broth is so incredibly meaty this particular topoki should be eaten with a spoon. 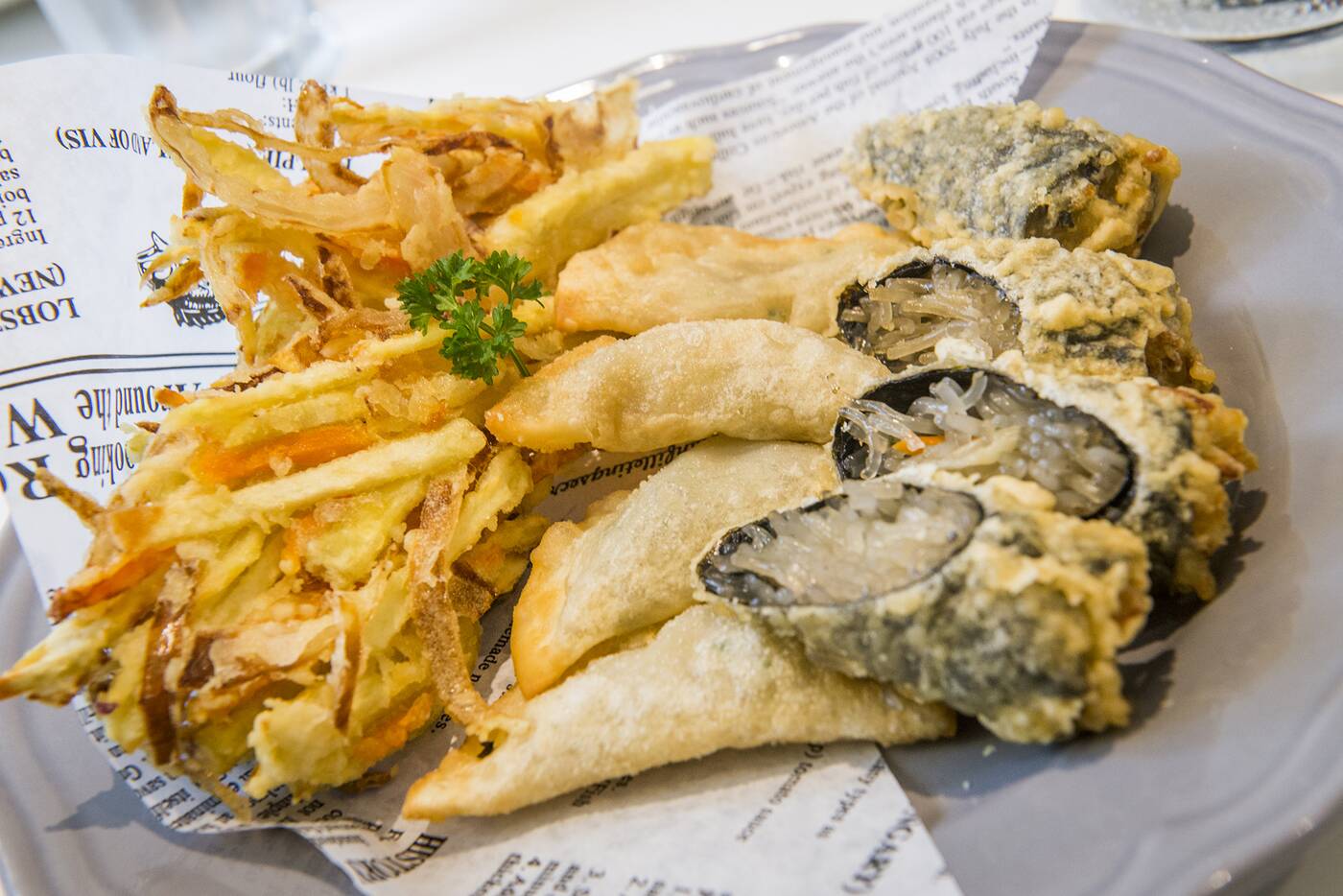 Snacks aren’t really intended to come before or after your topoki. It appears to be a good idea to eat them alongside your main. Gimmari ($5) are deep-fried seaweed spring rolls stuffed with glass noodles, crunchy, oily, and great for dipping in the spicy sauce.

Grab them on a fries platter ($8) along with mandu and veggie fries ($5 each on their own). 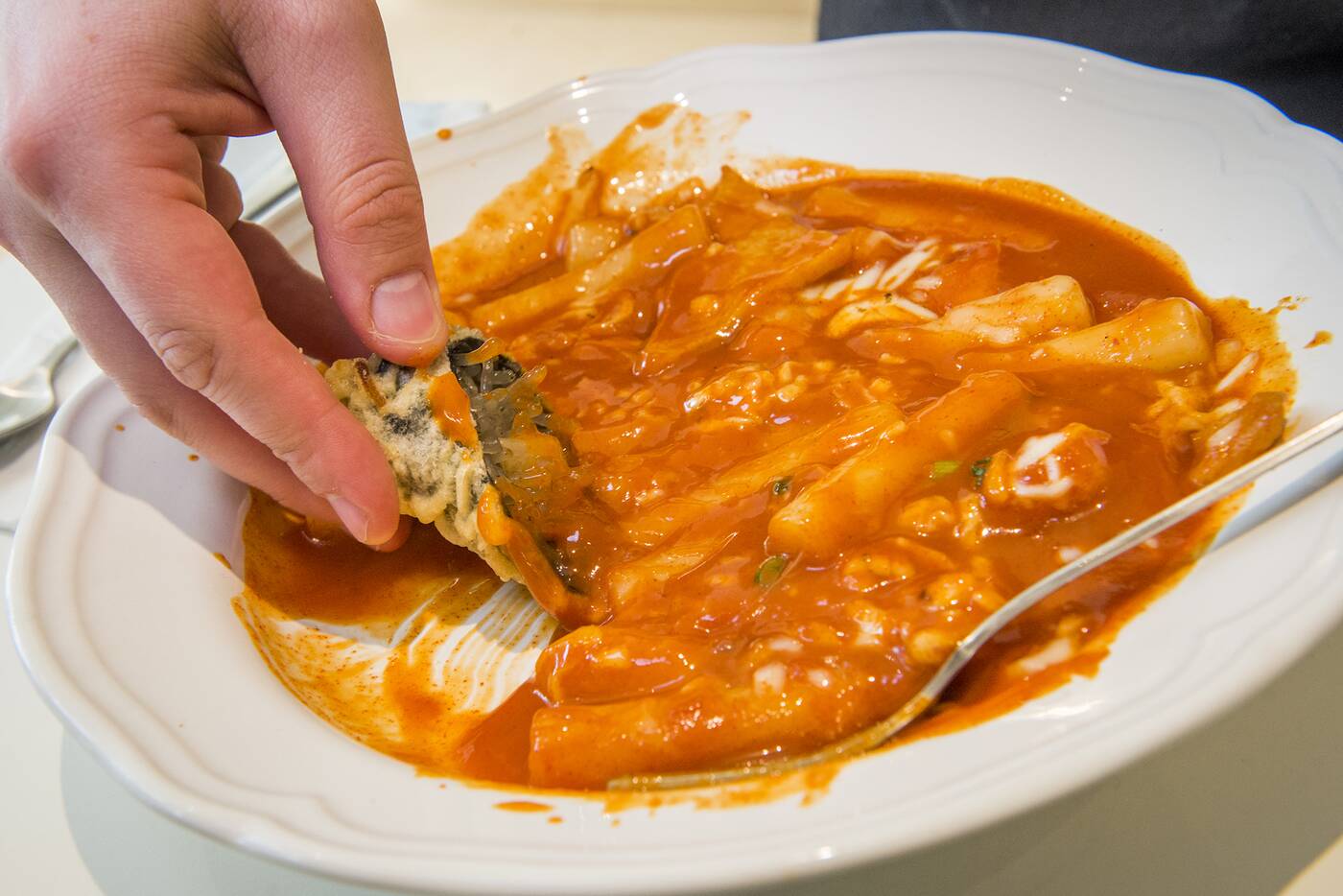 All are good for dipping in any of the sauces, glass noodles stuffing the dumplings as well. 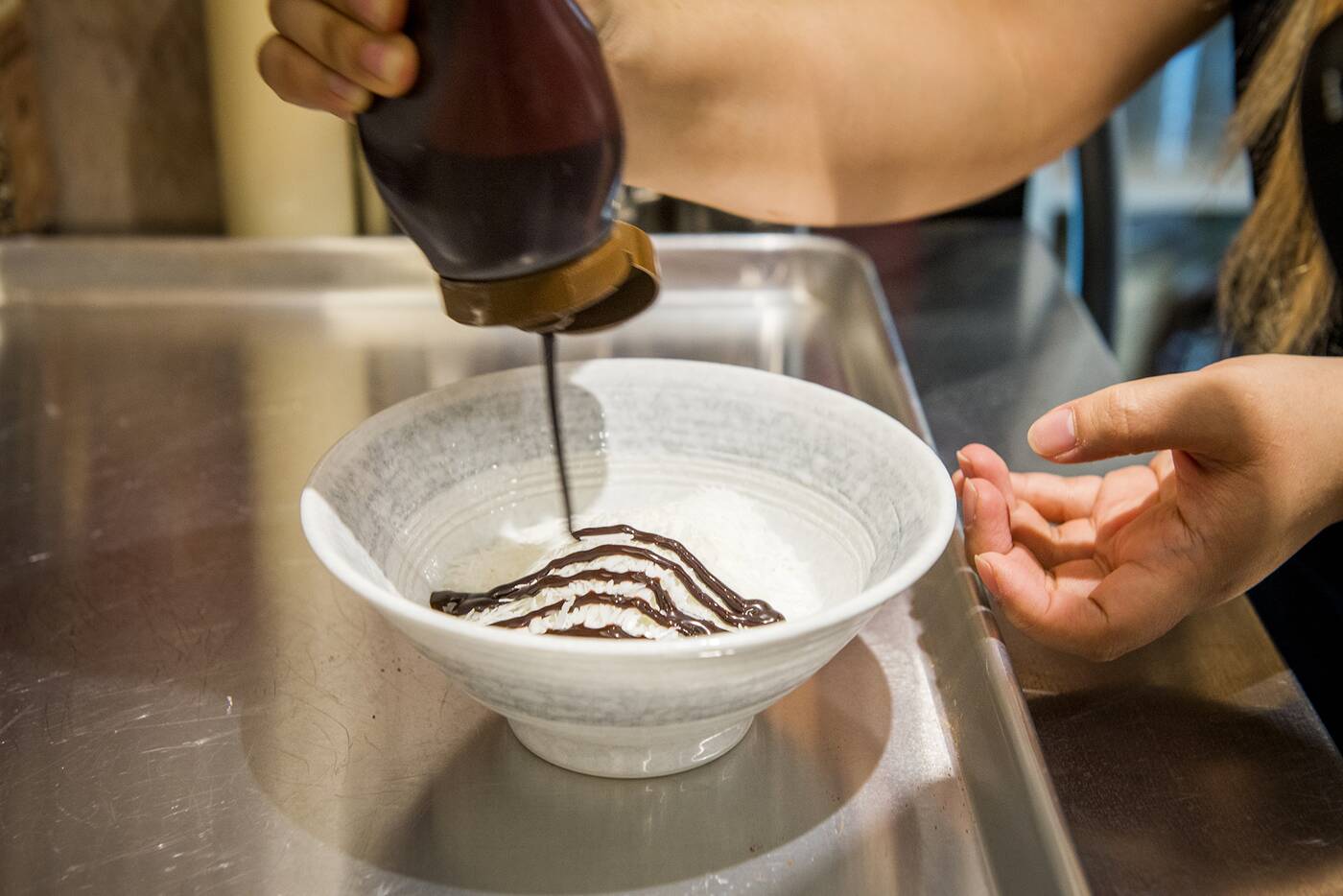 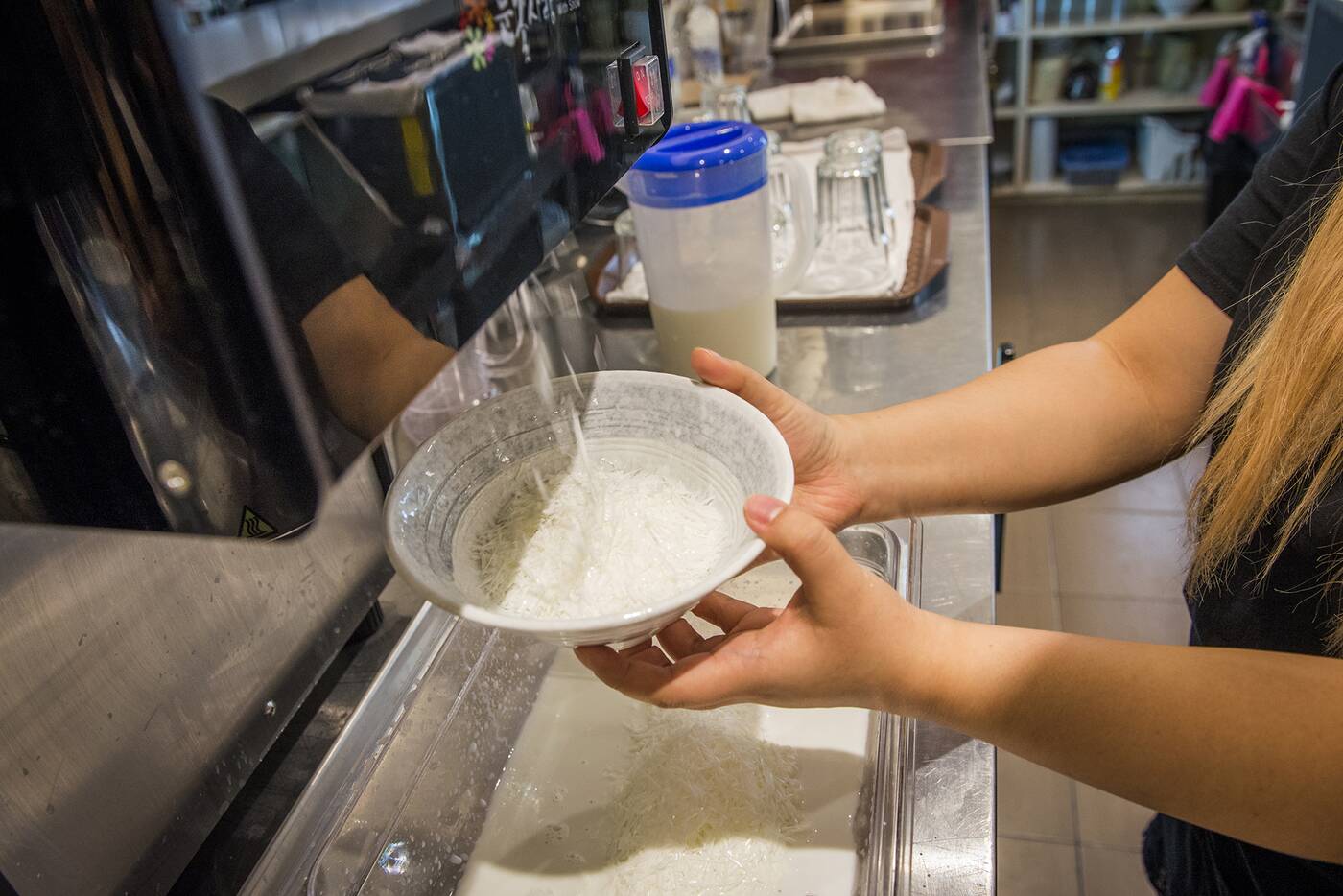 It starts out with a mountain of milky shaved ice for a base. 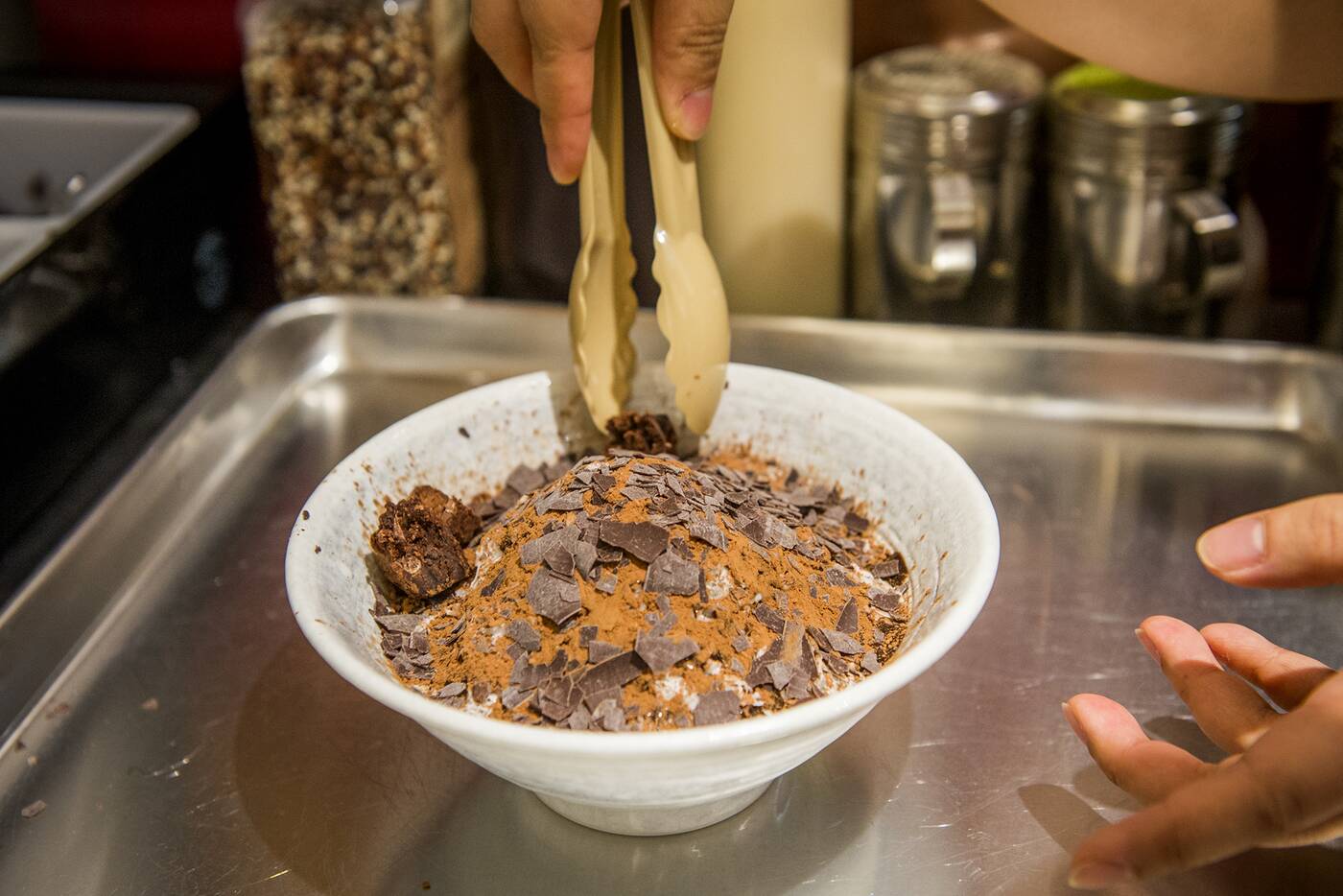 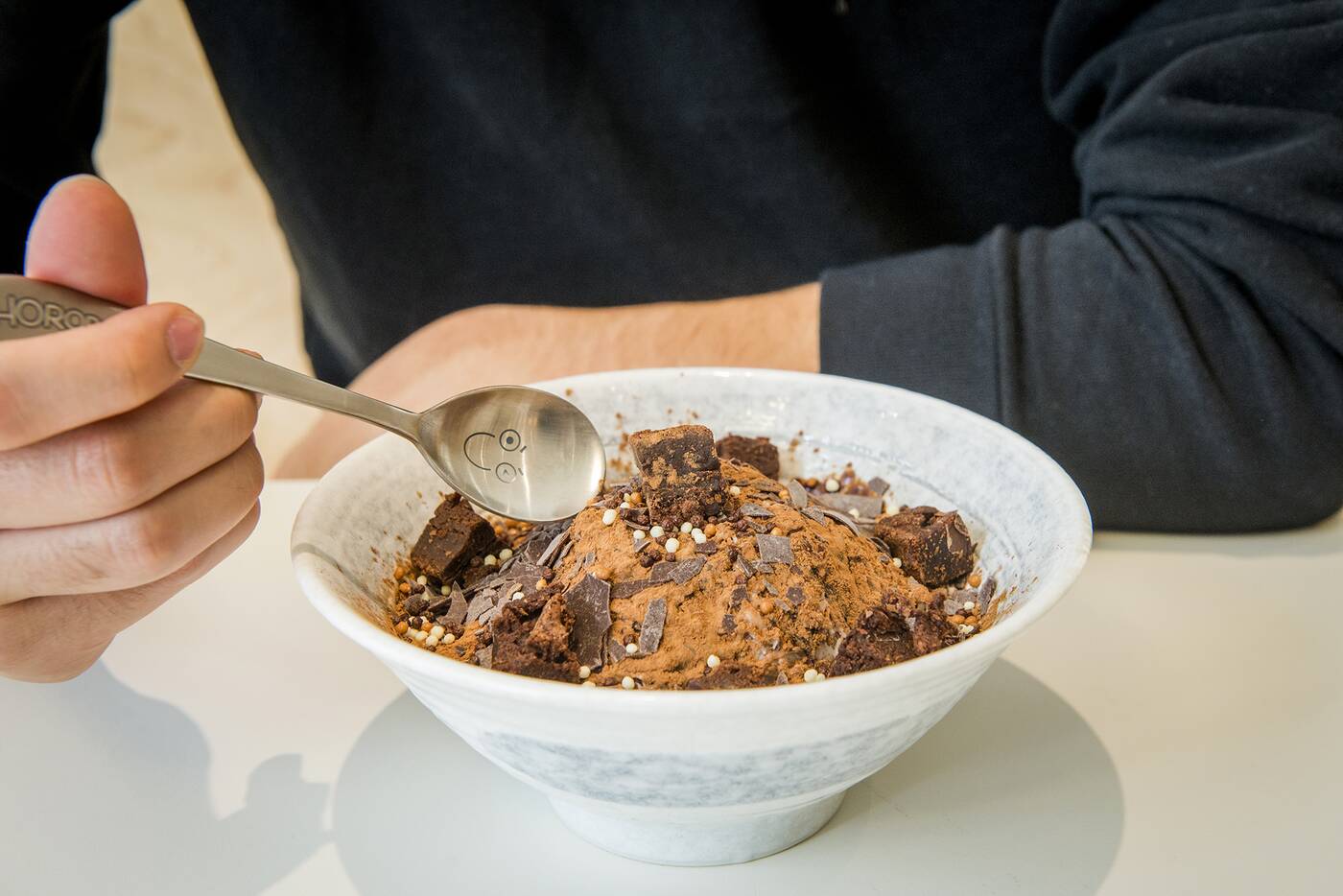 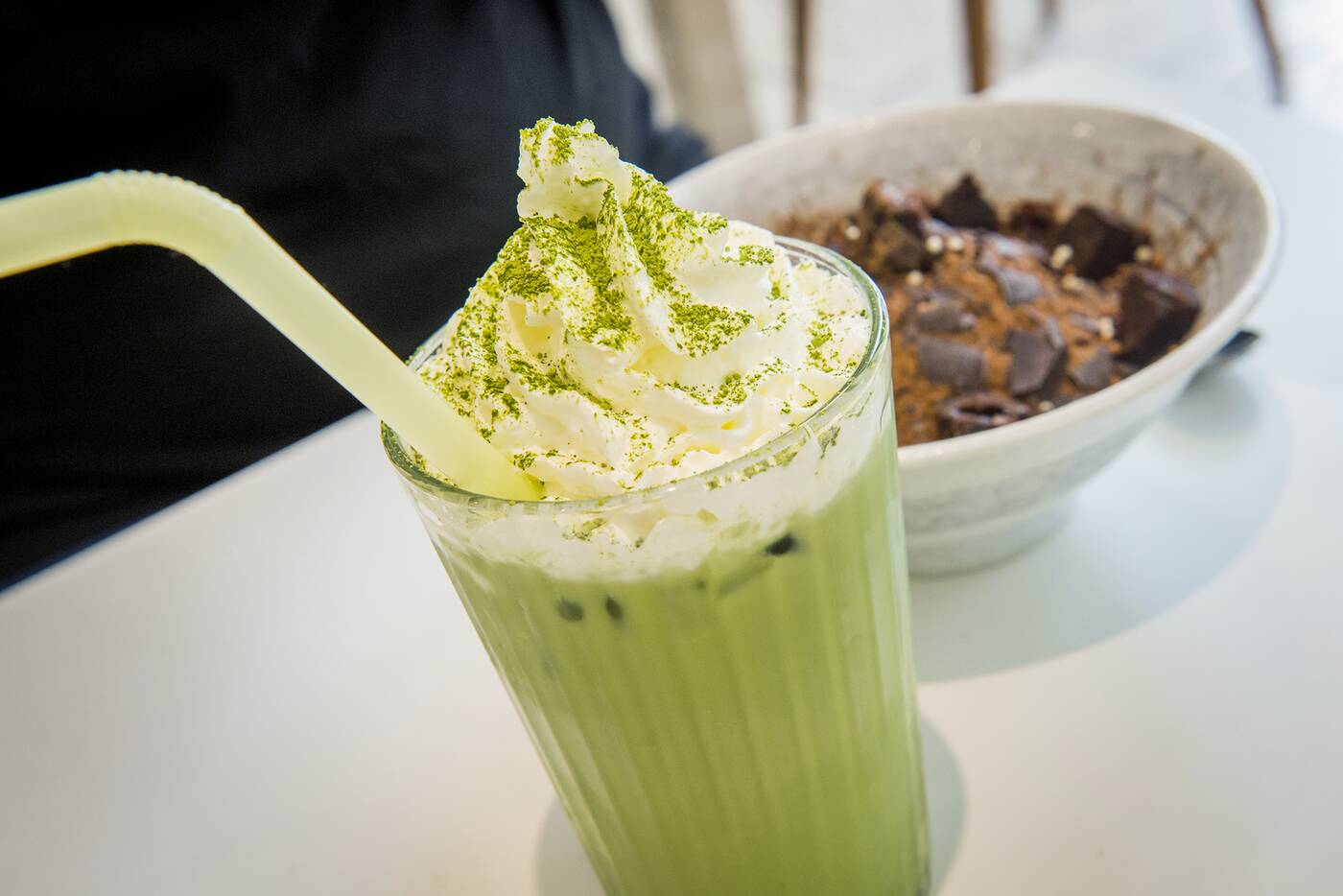 Iced lattes ($4) come in these same flavours, topped with a generous squirt of whipped cream. They’re also licensed should you want to refresh yourself with Sapporo instead. 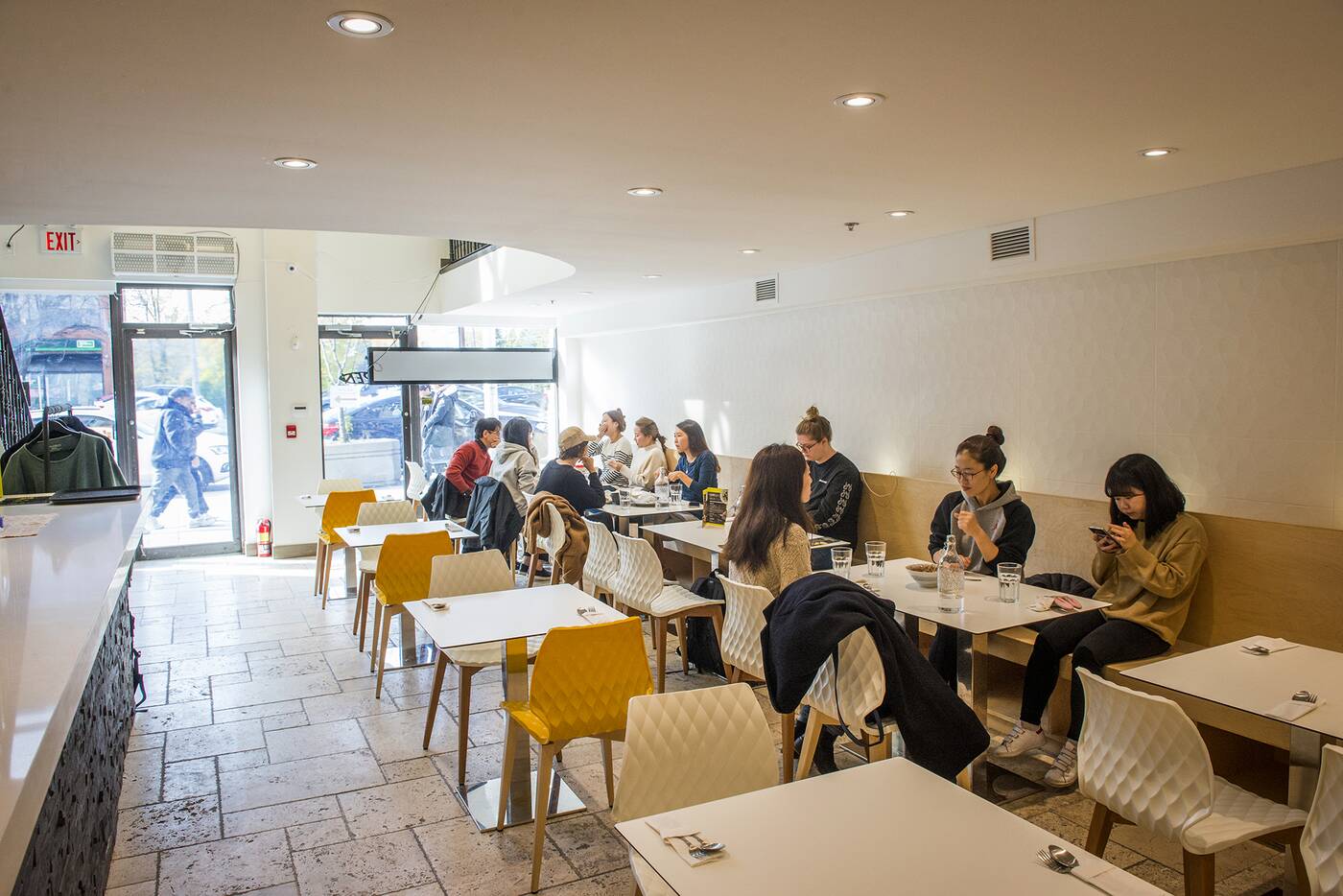 USB outlets line the wall for all your Instagramming needs. This is the very first ever Go Topoki in Toronto serving their menu based on the unique street food. 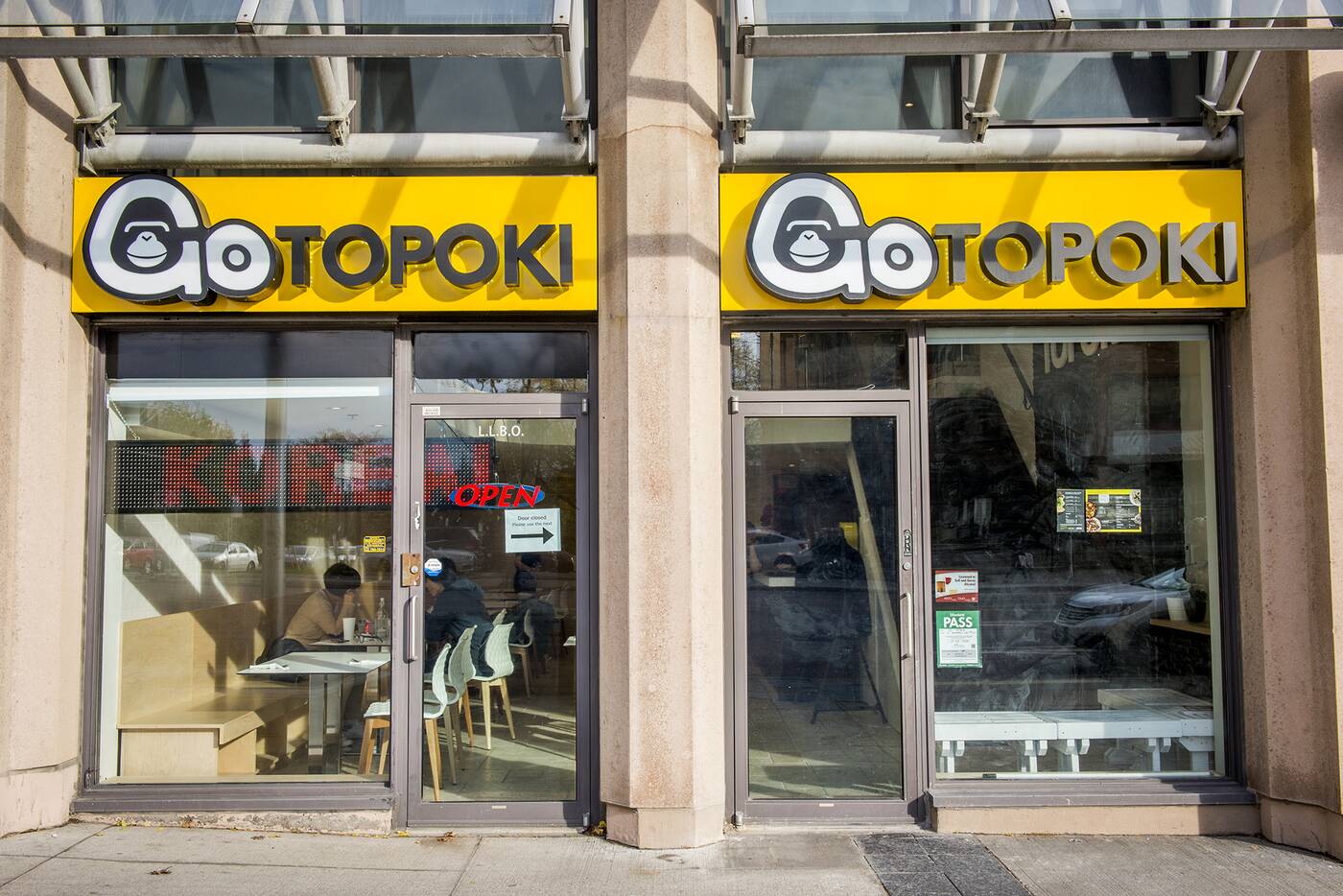