Brock Sandwich is currently open but their offerings and services may be affected due to the pandemic. Please contact the business directly for more information about any changes. Is this your business? Please contact us if you would like to update this message.

Brock Sandwich was almost lost forever, but thankfully for Toronto sandwich lovers, it bounced back better and more beautiful than ever following a devastating fire.

Named for the street it's situated near, Brock Sandwich specializes in sandwiches of all kinds, from burgers to baguettes, fried chicken, and even vegan options. 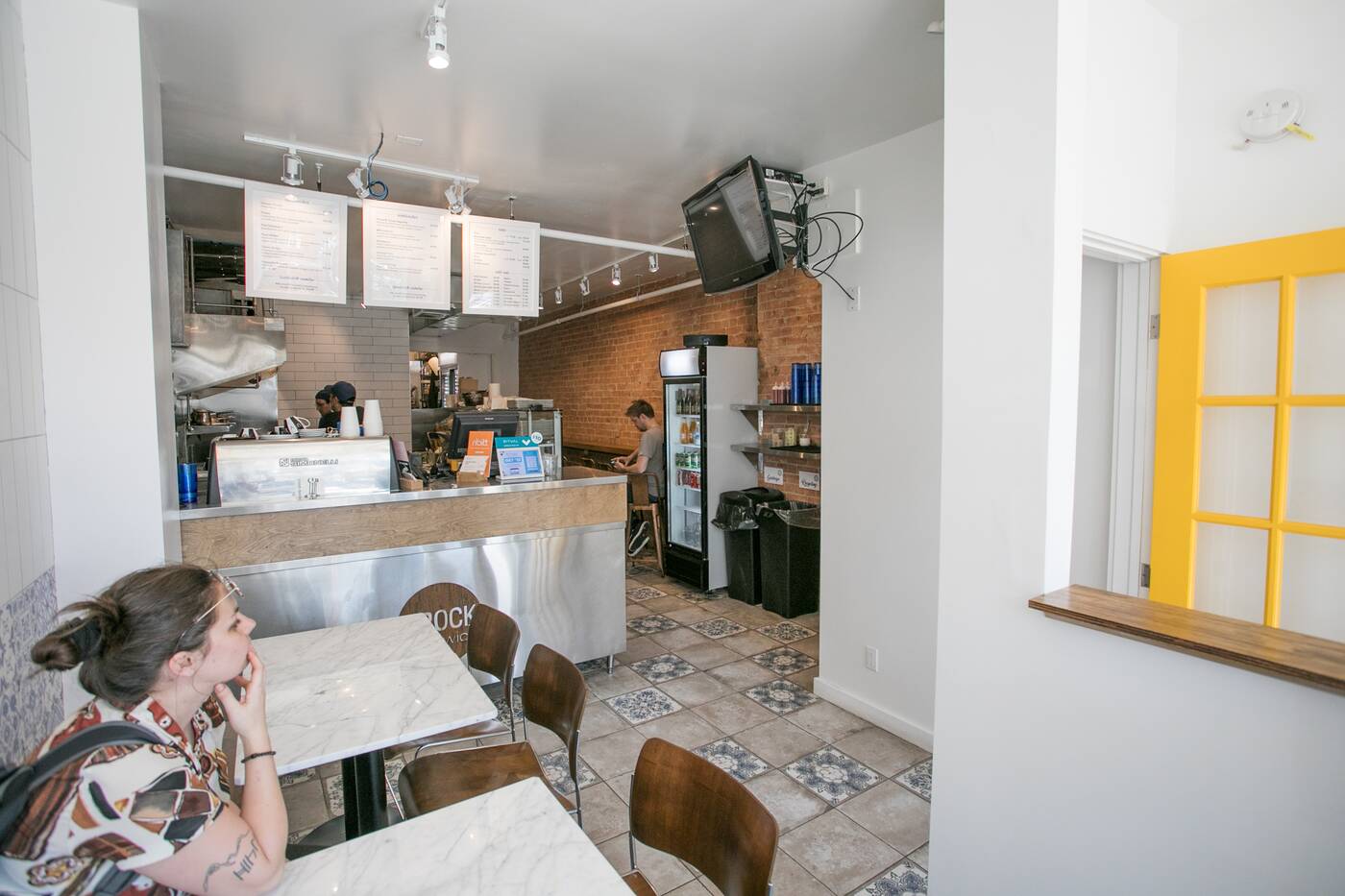 The fire necessitated all the equipment in an open kitchen being totally replaced, and with a new tile job the space remains comfy, casual, angular and light-filled with seating for around 20. 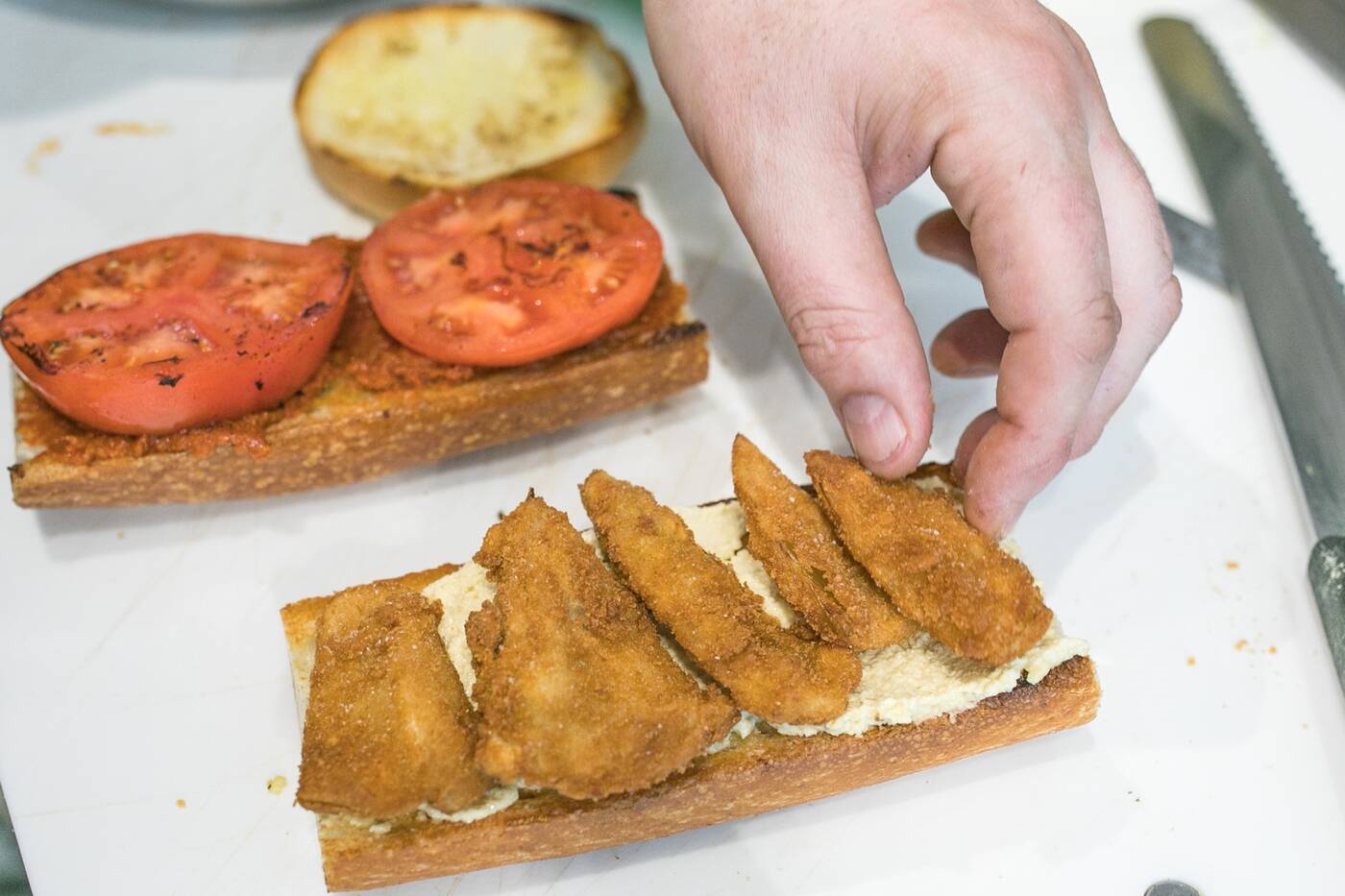 A fennel and tomato baguette ($12) is one of the vegan offerings, the other a satisfyingly meat-like BBQ jackfruit. Both sit comfortably and non-judgmentally above bacon, sausage patty and even duck confit sandwiches on the menu; all sandwiches are welcome here. 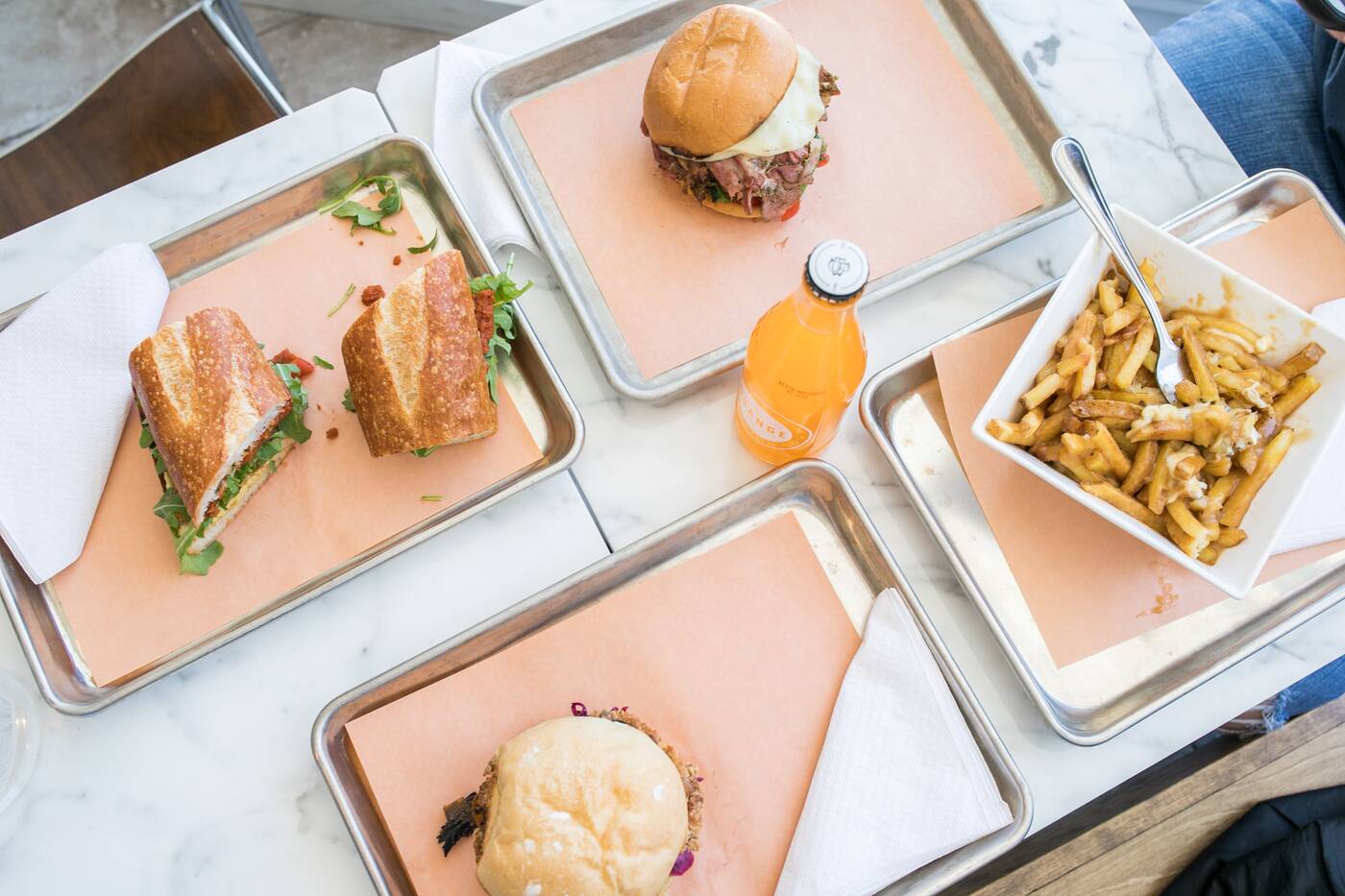 They'll tell you that essentially, everything is made here except the prosciutto, cheese and bread. For the fennel sandwich, big chunks of fennel are braised and then breaded with an egg replacer, and paired with a house veggie "cheese" made from cashews buzzed with nutritional yeast. 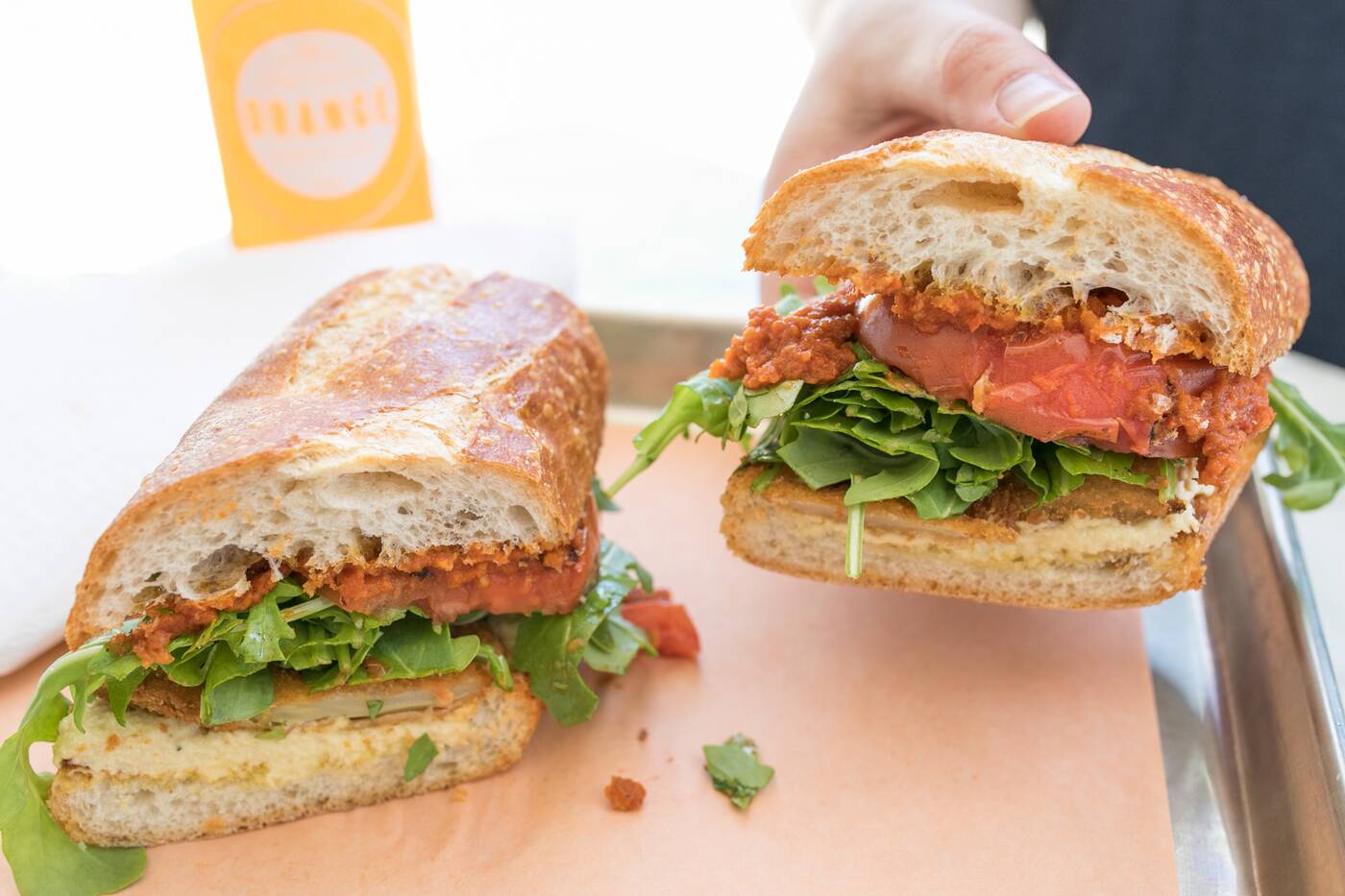 Add charred tomato, sun-dried tomato pesto and arugula and put it all on a crusty yet fluffy baguette from nearby Paris Bakery at Lansdowne and Wallace, and you've got a solid take on the flavours of a sort of Italian breaded veggie sandwich. 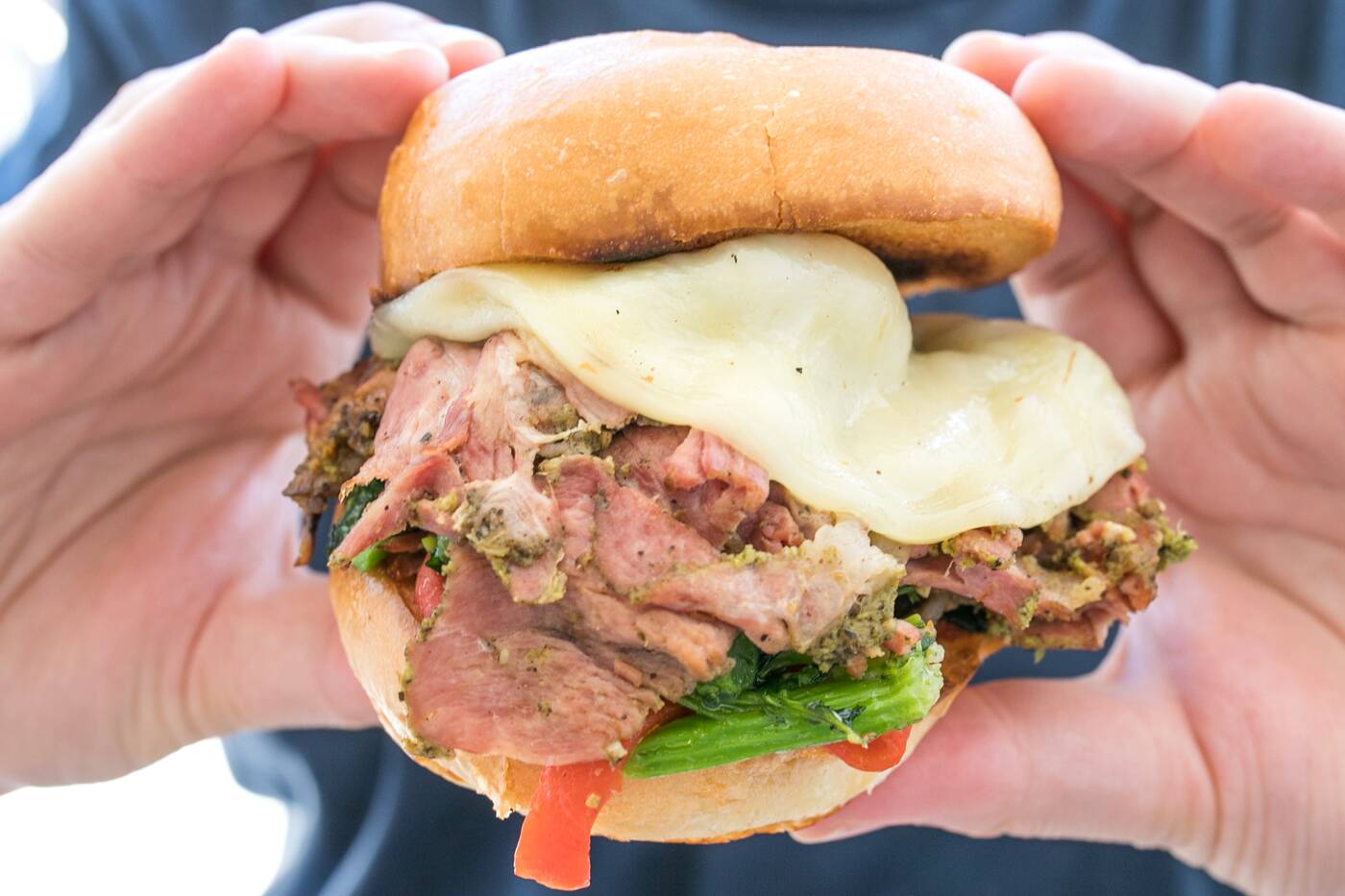 There's usually a sandwich on special, today's being a porchetta ($12) that's been smoked a little, and slow roasted, rubbed with rosemary and garlic. Sliced thin, it's served on an puffy egg-washed Fred's Bread bun with roasted peppers, sauteed spicy rapini and melty provolone. 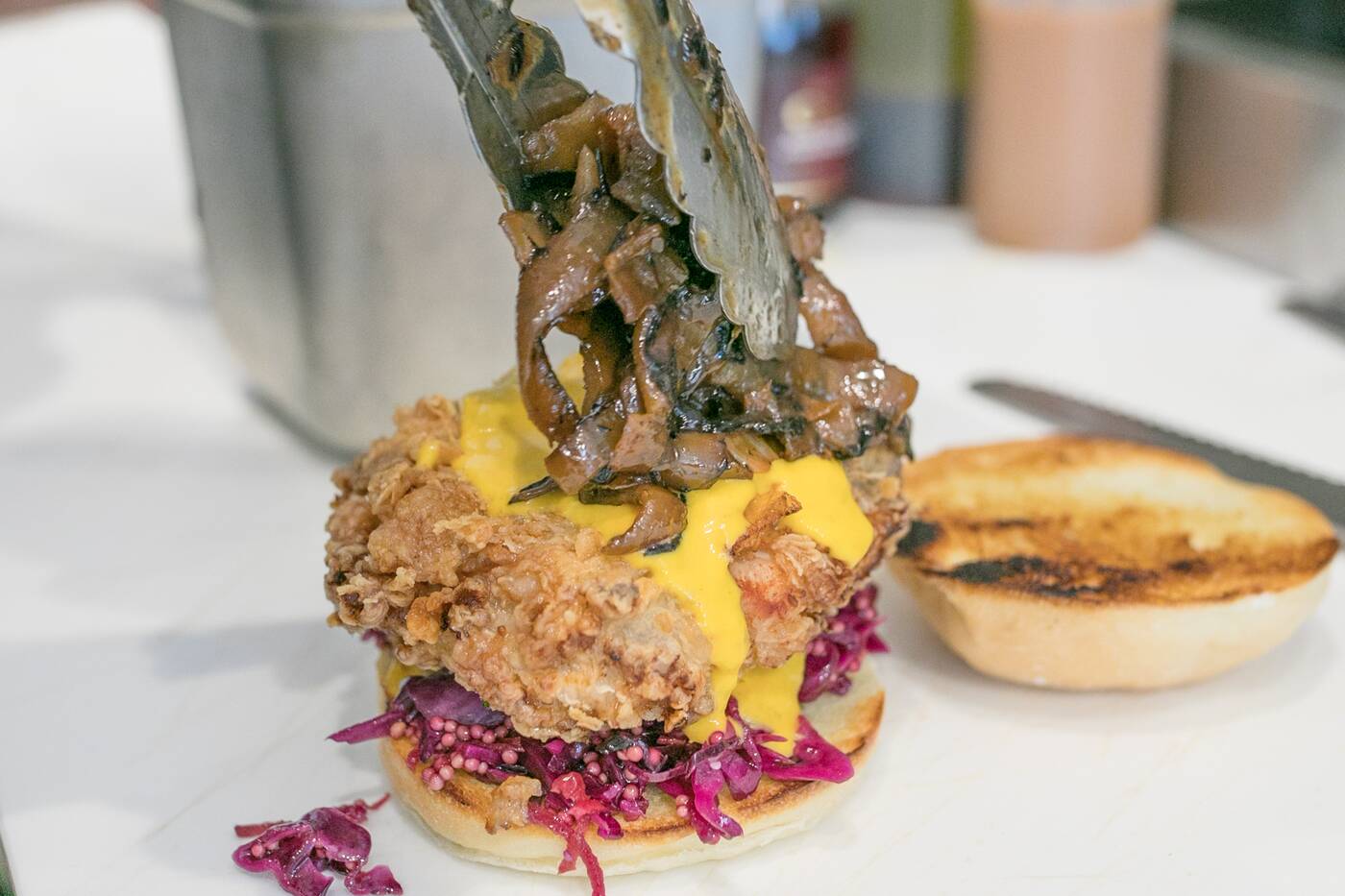 The chicken piri piri ($11) is a classic here, deboned leg and thigh meat that's been brined and marinated in buttermilk for a day then dredged in flour, cornstarch and onion powder served on a plain Fred's Bread bun with charred onions, Dominic family recipe piri piri sauce and a vegan slaw of red cabbage, pickled mustard seeds, onion and carrot. 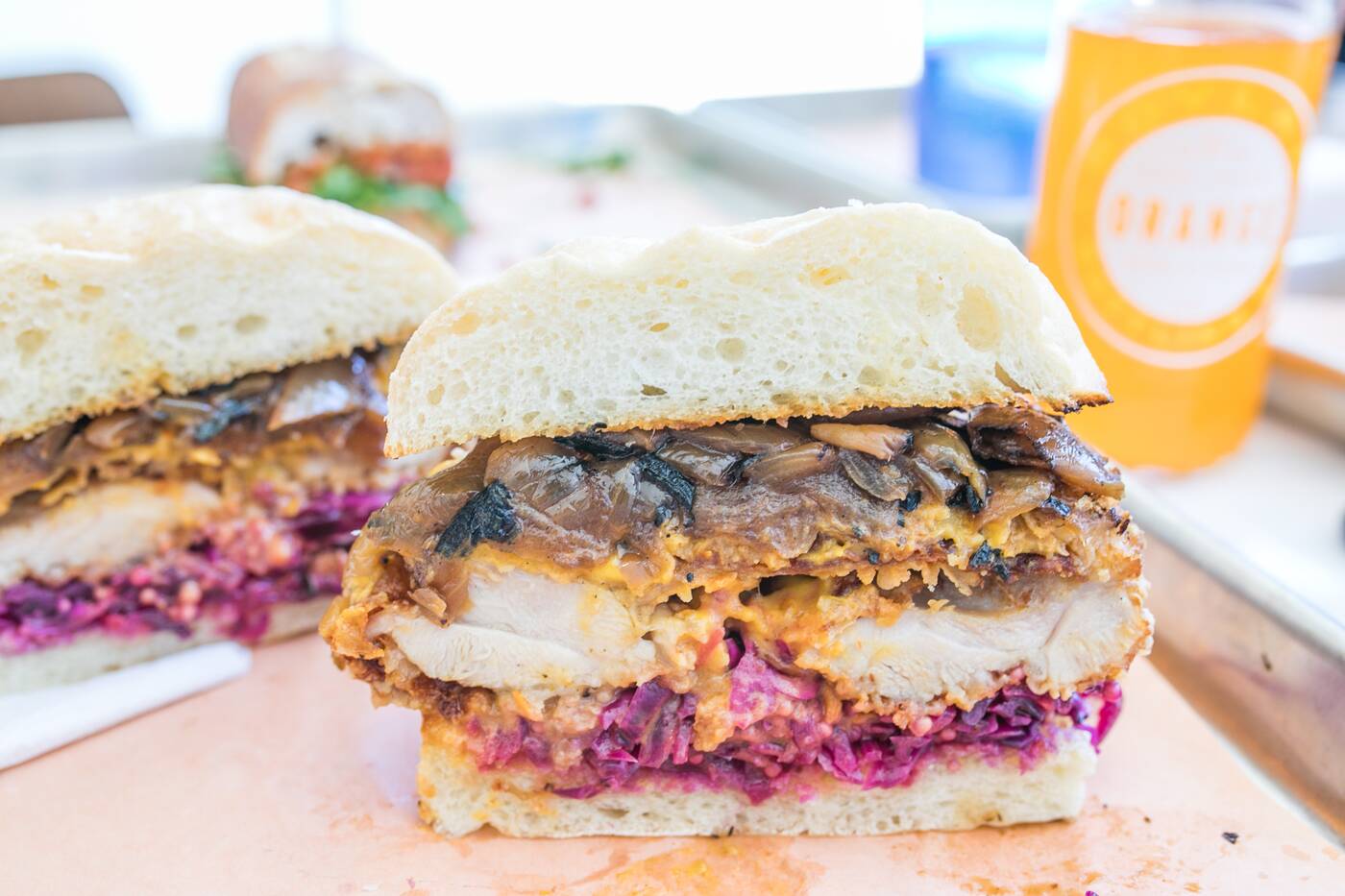 The chicken is juicy and crispy, set off by the opaque, spicy, almost creamy sauce along with the mountain of sweet onions and the popping acidity of the mustard seeds in the slaw. 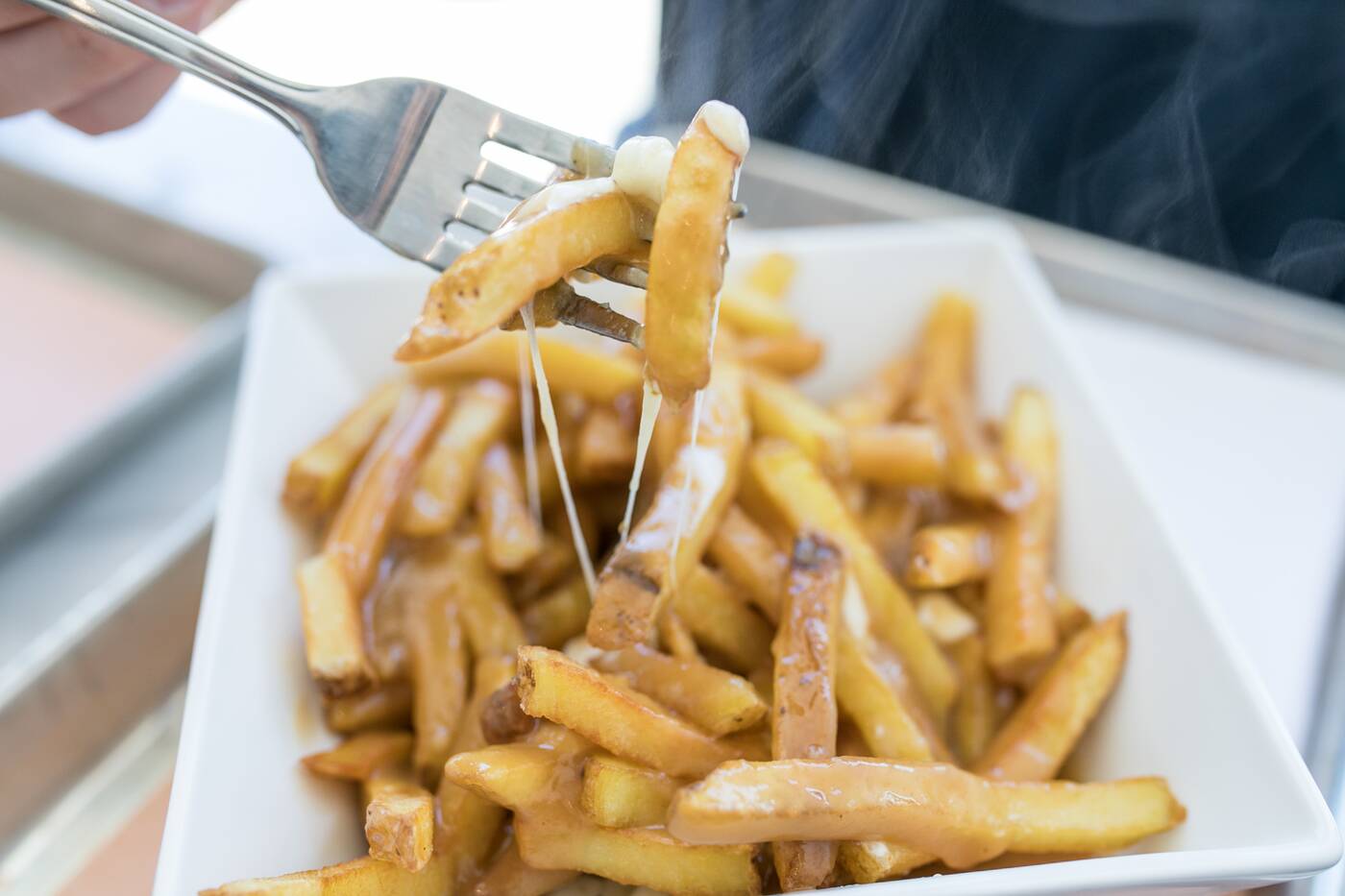 A sleeper hit and one of my favourite things here is actually the truffle poutine ($10), fries laden with a gravy that's more silky than thick and just enough stretchy cheese curds to stand up to the funky, luxurious flavour of truffle. 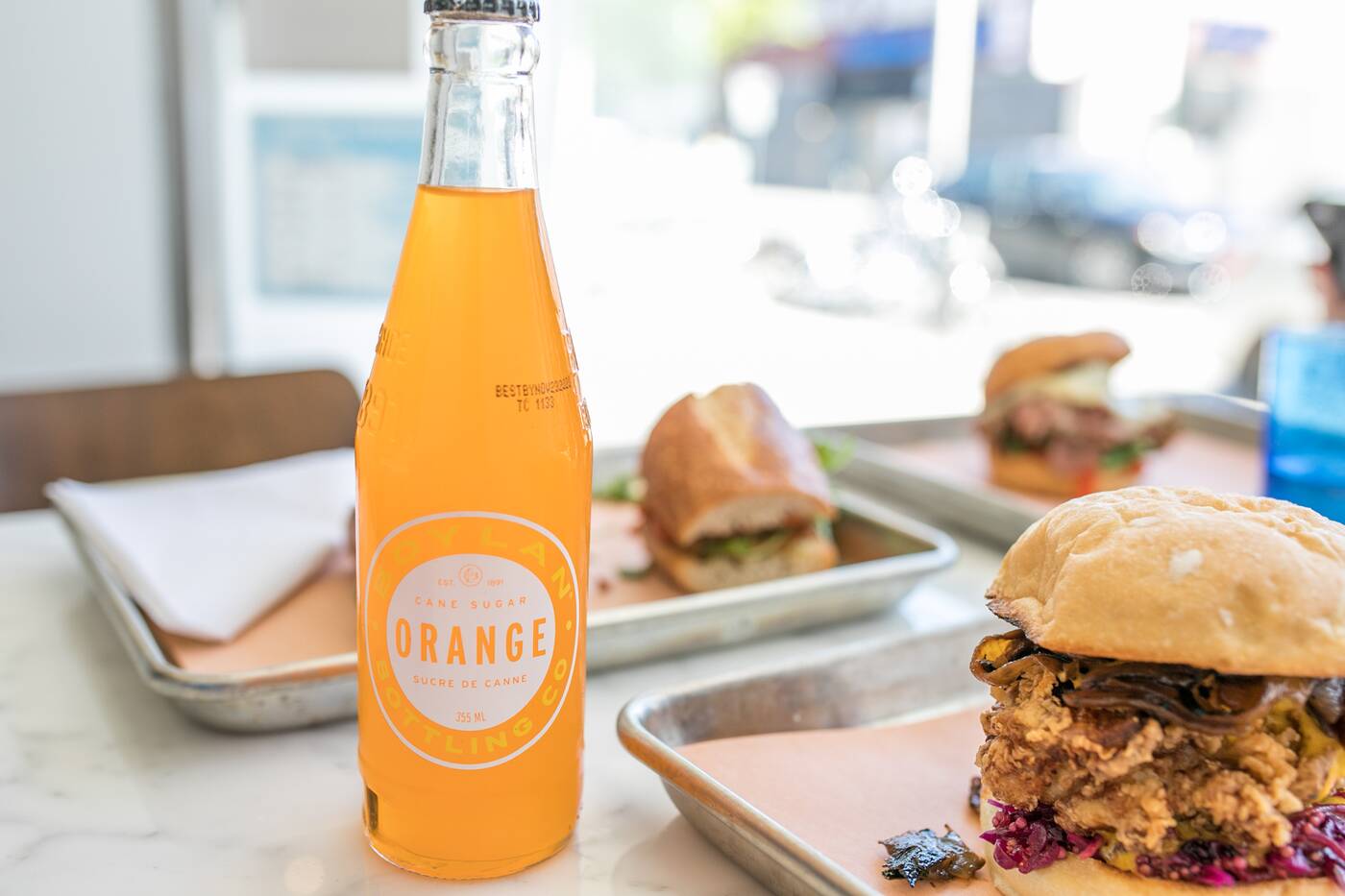 In addition to Boylan sodas, there's also coffee to drink. 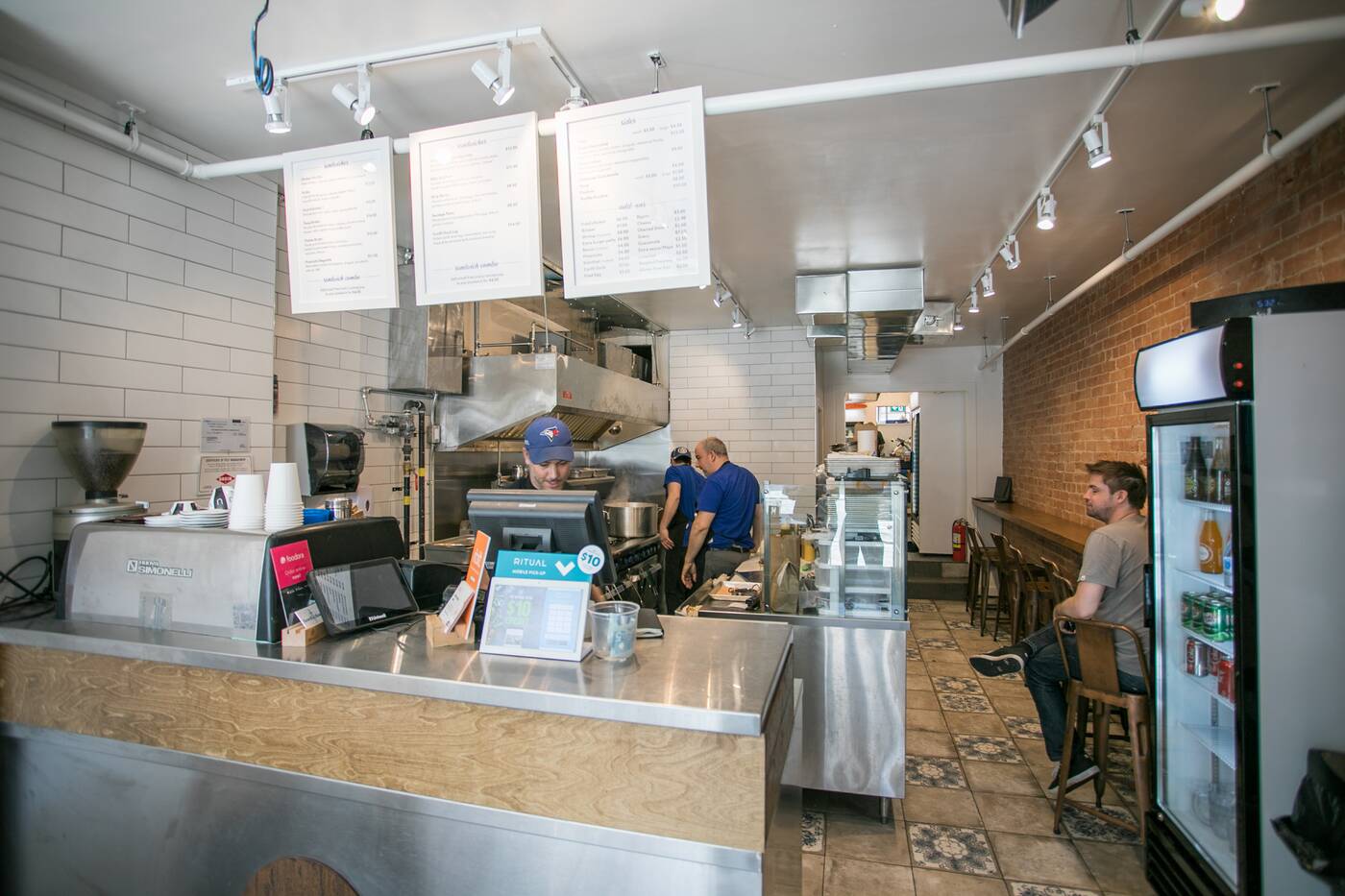 Feel-good retro tunes from the likes of Presidents of the United States and Beastie Boys play the entire time I'm there, as tattooed and leather-jacketed patrons come and go. I hope they'll be able to continue to for quite some time. 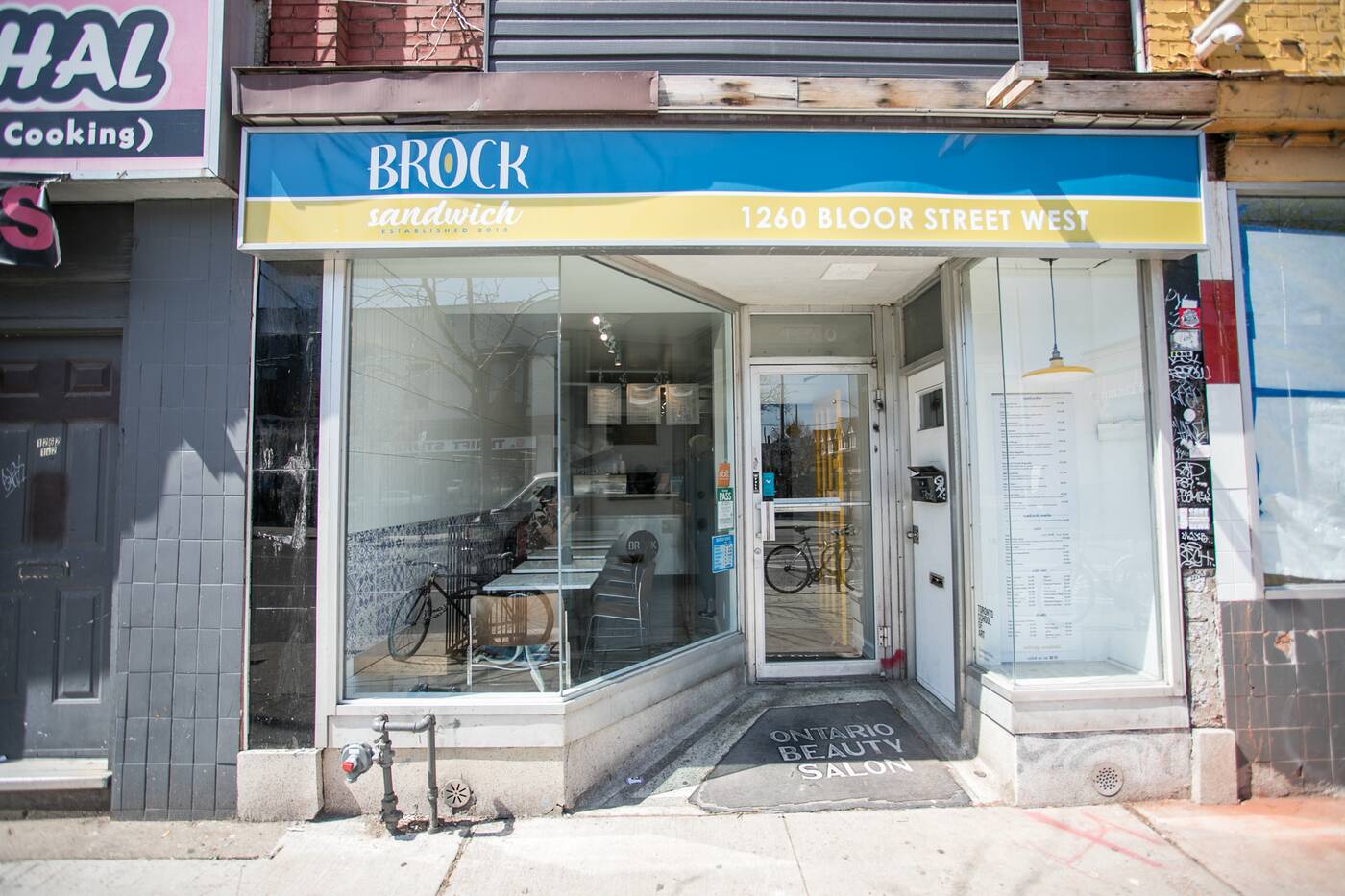