You could say brunch in Toronto is as much a sport as a meal. At least, that's what my boyfriend says. Foodies battle to discover and promote the new brunch spot; each Torontonian will take up sword for their spot when the inevitable weekend debate arises.

As a Torontonian-in-training (who didn't experience this brunch-upmanship growing up in the burbs), I scoffed at this suggestion. Although it pains me to admit it, he's right. A great weekend can be punctuated with a great brunch. Our second visit to B last Sunday confirmed its delightful brunch fare influenced his decision to call this area home.

B, located at the fork in the road where Roncesvalles merges with Dundas St. W, has a subtle charm. With its unassuming decor -- Marvel comic book pages on the tables, cacti table decorations, recycled tomato paste tins for the bill and signature B carved into salad garnishes -- and friendly staff, B feels like the local hub where residents of all ages (and musical tastes) meet. 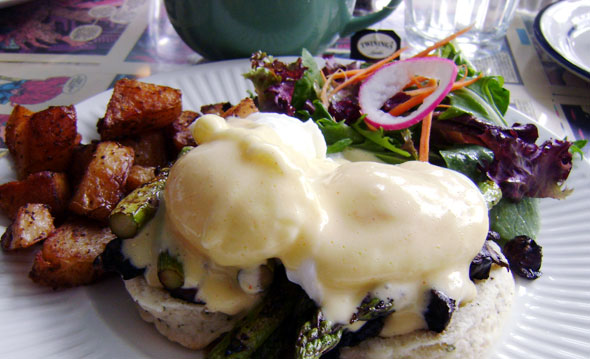 Patrons are lured by chef and owner Rob Bechard's thoughtful, wholesome twists on brunch classics. Rather than one egg, two egg, pancake plates, B's menu is full of fresh takes on conventional brunch staples -- like the French toast stuffed with berries and brie ($13) or the Hobo Scrambler ($11), a medley of fresh vegetables, cheese, herbs, bacon and potatoes.

Bechard has no formal chef's training, but learned to cook at university, where he decided he would become a chef. Bechard worked as a chef in Toronto for five years at the Drake Hotel , Jamie Kennedy Wine Bar and the Kit Kat Italian Bar and Grill. 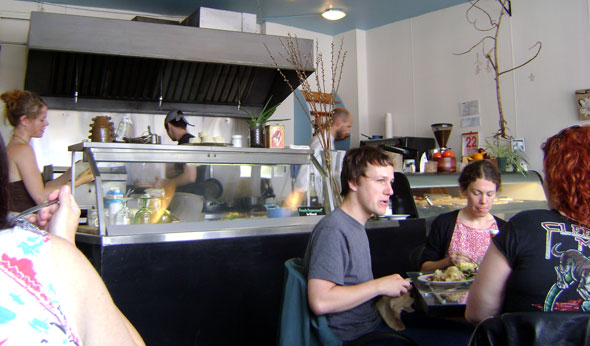 In January 2007, Bechard opened B in Roncesvalles , his stomping ground, to satisfy his hunger for a great local spot. Local is his mantra; Bechard sources half of his ingredients from local businesses in Roncy (the other half come from Kensington Market ). He also uses fresh ingredients and avoids frozen food as much as possible.

On this Sunday morning, we both chose B's specialty: gourmet Eggs B. -- Bechard's reinvention of Eggs Benedict. I had the Eggs B. with Portobello mushrooms and asparagus ($12) and my boyfriend had the Super B ($12) -- eggs poached in a tomato basil sauce with duck and apple sausage -- both of which come with crispy potatoes and fresh mesclun salad.

What makes these Eggs B. is the flaky homemade savoury basil biscuit they rest on, and the rich, but surprisingly light Hollandaise sauce that Bechard creates from scratch. Our dishes were so delicious, we cleared our plates, but we didn't feel greasy or stuffed. Instead of adopting the Grand Slam approach to brunch, B opts for smaller and more flavourful dishes.

Another pleasant surprise is the reasonable, if not generous, prices: that Sunday the two of us brunched for $29, before tax and tip. My only negative would be B's limited seating; if you don't go early, you'll be in the line out the door. I suppose that's part of its charm though -- a cozy experience. 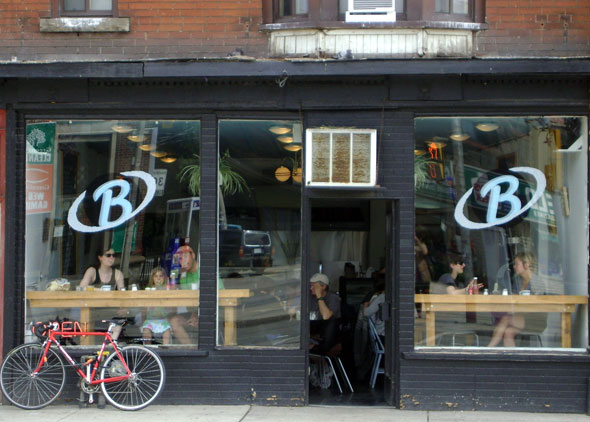 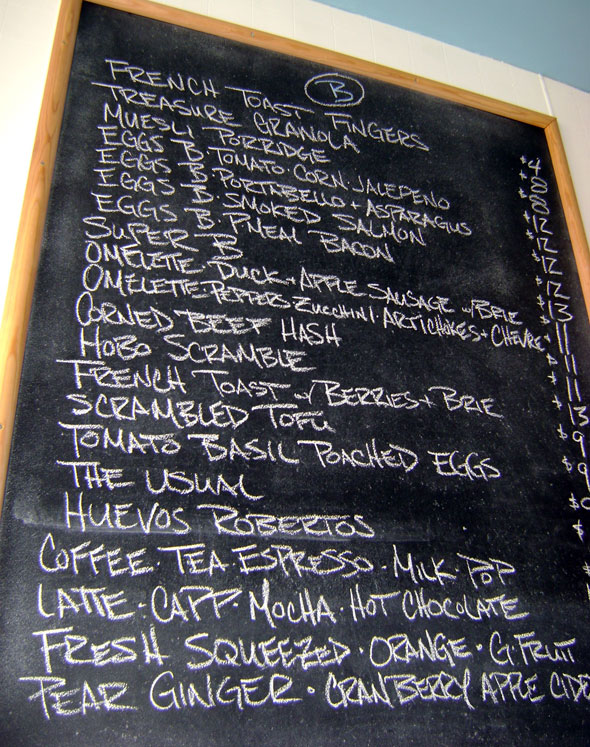