There once was a time, believe it or not, when $750 a month could get you a decent place to live in downtown Toronto — with roommates, of course, maybe more than a few, but none of whom you had to sleep directly next to.

These days, with rent prices for one-bedroom apartments in the 416 averaging $2,532, you're lucky to nab one of four bedrooms in a shared suburban basement for less than a grand. I'm serious.

You could, however, rent out half of somebody else's tiny bedroom in a shoebox condo that isn't an hour away from the downtown core by transit.

Like, if CN Tower views are more important to you than any modicum of privacy, this sort of arrangement appears to be growing more and more common by the day in Toronto and other very expensive cities.

A listing for a shared bedroom "in the heart of downtown Toronto" got people talking last week about the lengths some renters will go to for a prime location in the city, and it's far from the only one of its kind.

"I'm looking for a roommate to share a room in a 2 bed 2 bath condo in downtown. (Room will be SHARED between 2 people)," read the listing in question, which was originally posted to Facebook Marketplace but has since been deleted and now lives on as a screenshot.

"Man looking for a room mate in a tiny room for $750 a month in the heart of Toronto. Beautiful CN Tower views though… Are we okay?" asked someone who shared the ad on Reddit last week.

"By the way, not blaming the guy who posted this. The guy clearly doesn't own the place and he's only renting the room. It might be the only way he can afford to live right now," continued the original poster in a comment downthread.

"I'm just very disgusted on what's happening in our housing system right now. Hope things turn out better one day for everyone."

A similar Reddit post started circulating this week in which someone can be seen advertising a five-bedroom house in Barrie, Ontario, with "sharing rooms" going for $400 per person.

The poster wrote that the ad was seeking ten people for the five-bedroom home, which appeared to be geared toward local college students.

Some on Reddit contend that these units are typical of those occupied by international students in the GTA, similar to criticism aimed at other high-profile "nightmare" rental listings in which several people are expected to share one single bedroom.

What we're starting to see now, though, is less of a dormitory situation and more of a "please rent out half my room so that I can afford to stay in this condo" situation. 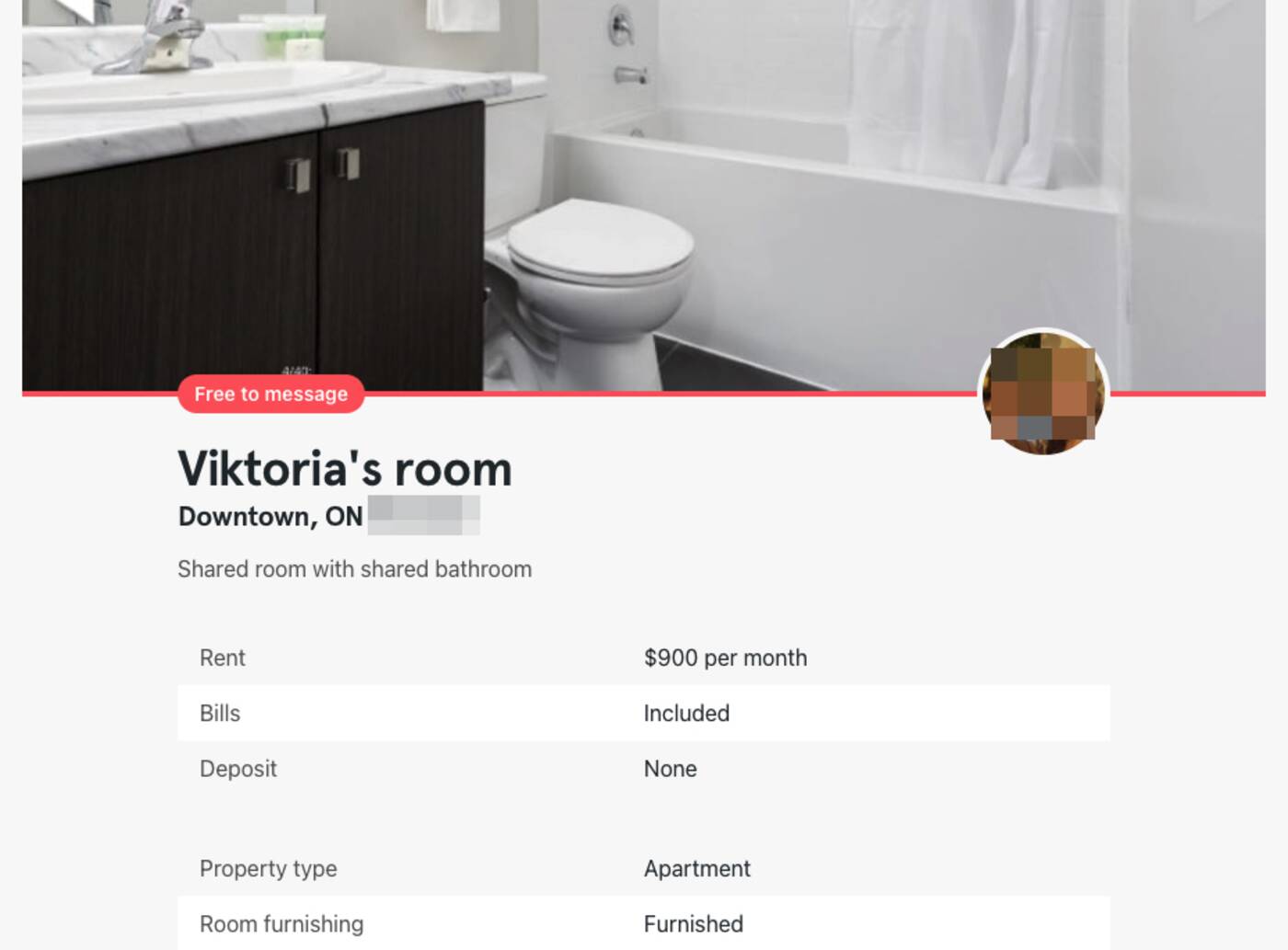 One of many rental listings for space within individual Toronto bedrooms as of December 2022. Screenshot of roomies.ca.

We've seen plenty of tiny dens, curtained-off living room spaces, couches and even literal closets go up for rent in and around Toronto over the past few years, but never before have so many listings been observed for people leasing out half their own bedrooms.

Between Kijiji, Facebook Marketplace and myriad rental listing sites like roomies.ca, it's not hard to find double-shared accommodation anywhere in the region right now.

Sharing a bedroom with a sibling, friend or even a partner can prove challenging under the best of circumstances, but half-bedrooms might be a good solution for young people who want to live downtown without paying astronomical prices. A better solution than some, anyway.

For some people, the lack of privacy that comes along with sharing a bedroom might be preferable to the lack of... like, everything good that comes with living in a cheap, sketchy dungeon with only unstable-looking shelves to sleep on.

One could also simply split the difference as rent prices rise to new heights by getting roommates who sleep in different rooms, without any waterfront views.