Imagine, if you will, weary downtown Toronto residents, stepping out of a four-bedroom house that you bought for less than $200,000 into a world where your hair can stay frizz-free for more than five minutes in June, July or August.

Such a place exists in Northern Ontario, according to said place's economic development corporation: it goes by the name of Timmins. Timmins, Ontario, population 41,145 (per the 2021 census.)

Like Smooth Rock Falls, Owen Sound, London and several other Ontario communities before it, Timmins is trying to woo Toronto workers away from their cramped, expensive urban lives in favour of greener (and dramatically cheaper) pastures.

This week, officials announced a new website — MoveToTimmins.ca — aimed at attracting more people to live and work in the Northeastern Ontario city.

The site is just one element of a forthcoming marketing campaign aimed at young professionals and centred around the idea that "living in Timmins gives you more time to spend with family and friends."

"MovetoTimmins.ca aims to attract young professionals and families from the region and throughout the province. If you're looking for work, look here!" reads a release issued by the Timmins Economic Development Corporation (TEDC) published Wednesday.

"A lower cost of living and more disposable income means getting ahead faster and enjoying yourself along the way. Housing costs are lower here than most cities in the province of Ontario which means your cost of living is reduced."

The site boasts of its many job opportunities in mining, forestry, retail, health, social services, administration and other industries, as well as its vast network of outdoor recreational spaces, including a downhill ski resort, several golf courses, a cross-country skiing facility, 55 kilometres of trails and multiple provincial parks. 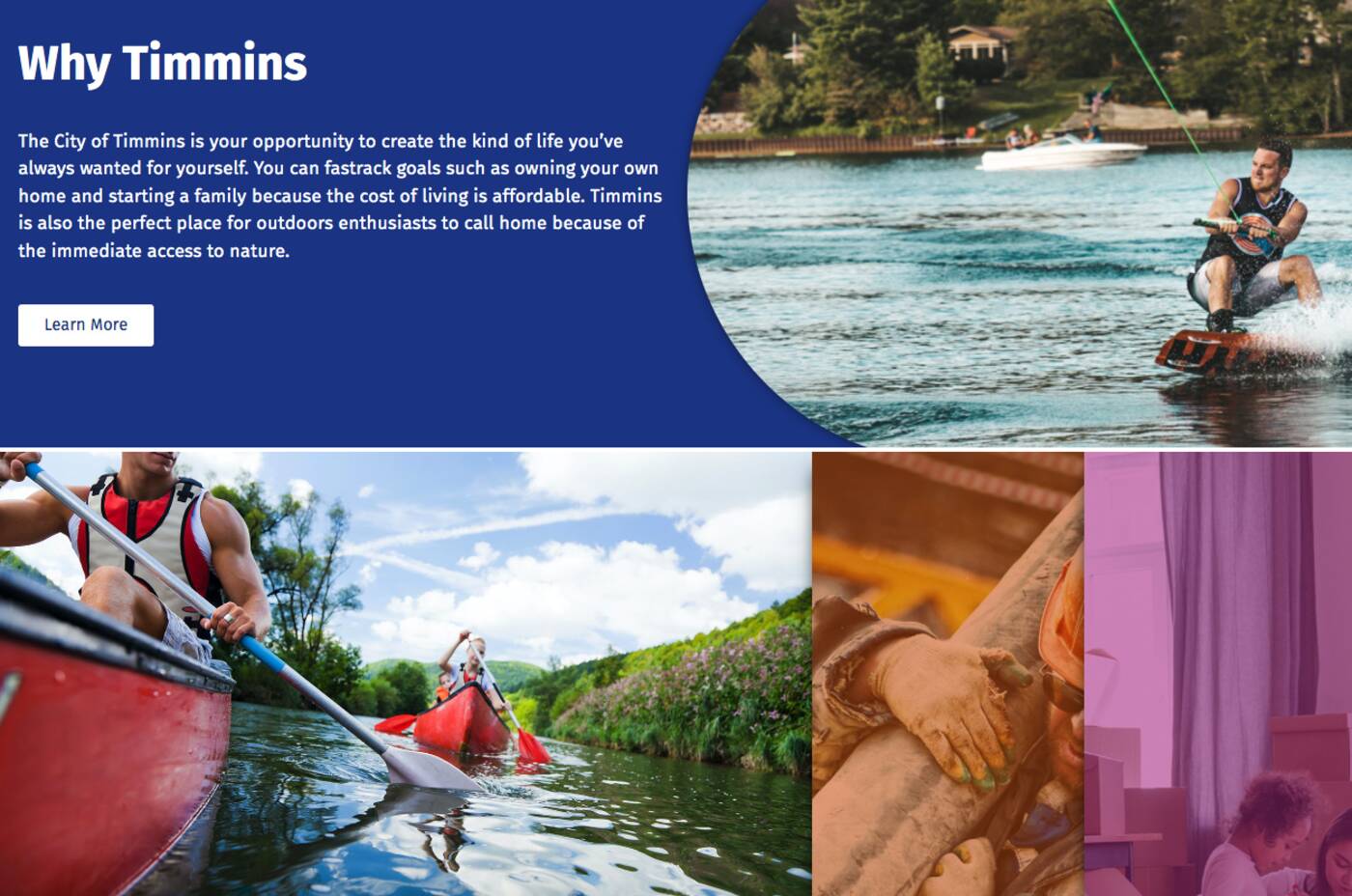 The City of Timmins presents itself as an inexpensive place to live with ample opportunities for getting outdoors. Screenshot of movetotimmins.ca.

With beautiful drone-shot overhead videos featured front and centre on the website, Timmins comes off as a glorious place to live for people seeking short commutes, access to nature and true work-life balance — if they can stomach moving more than seven hours north of their loved ones and lifestyles in Toronto.

For those looking to buy houses and start families, the distance might be worth it (for the record, there are several flights running between Timmins and Toronto every day.)

Pretty much anyone under 40 is notoriously screwed in terms of real estate in Ontario's capital, if they don't already own something, thanks in large part to absolutely unaffordable and continuously-rising housing costs (average home prices have risen by more than one million dollars over the past ten years.)

While the housing situation has been pushing away young Torontonians for years, the COVID-19 pandemic has hastened the departure of city dwellers thanks to the widespread adoption of remote work.

Because why would you pay $2,000 a month to work from a tiny downtown condo when you could do the same thing from your own home office inside a practical palace for a fraction of the price?

Even the fiercest urbanites are starting to consider leaving Toronto as the pandemic drags on and home prices rise into the stratosphere with no signs of slowing down.

Timmins may or may not be where they end up, but the city does have another key feature outside of jobs and lower home prices.

"Since Timmins is not located near any major bodies of water, the city doesn't experience the extreme humidity conditions that may be felt in other larger cities," reads the website.

I could definitely get on board with that.