Mississauga is no longer the sleepy suburb many in Toronto still remember growing up next door to. It has grown to become Canada's fifth-largest city, with a skyline that rivals any similarly-sized municipality on the continent, and it's only getting taller in the 905.

Developer The Elia Corporation has been advancing a plan that would partially surround a mall in the north end of Mississauga's nascent downtown with nine new towers at 4615 Hurontario, joining a wave of developments along that street being planned in advance of the upcoming Hurontario LRT.

As many other proposals seek to replace or cut down the size of malls for new housing, the plan for the community known as Elia Land would be built adjacent to Mississauga Marketplace, a suburban shopping centre at the southeast corner of Hurontario and Eglinton.

Undeveloped fields to the south and east of the mall are being targeted for this sizeable new infusion of density. 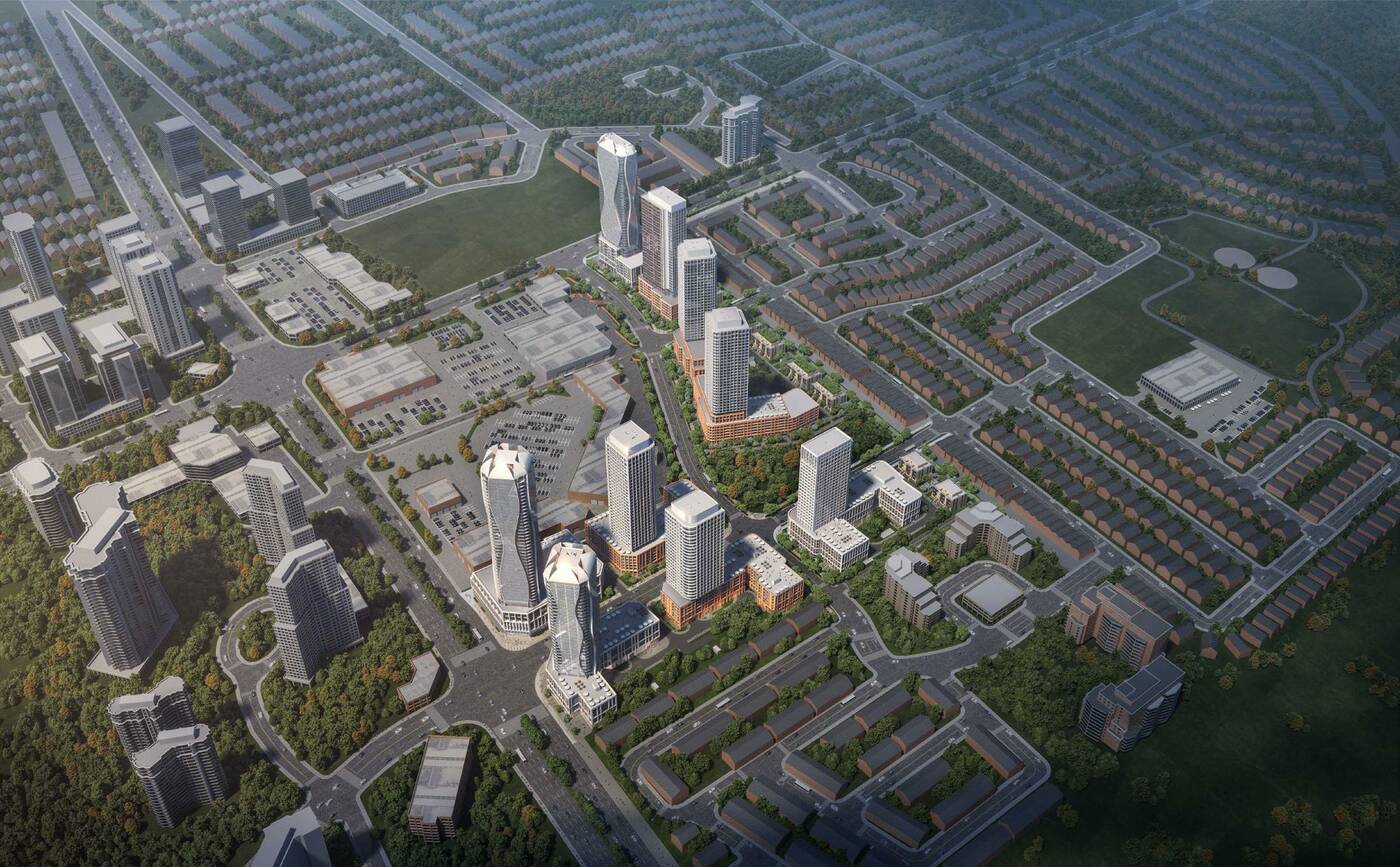 Designed by BDP Quadrangle, the project would see the site built out with nine towers rising as high as just over 156 metres, plus blocks of townhouses. This includes single towers rising 45, 42, 30, and 28 storeys, and five towers with heights of 36 storeys.

That's 325 storeys of development combined from the towers alone. 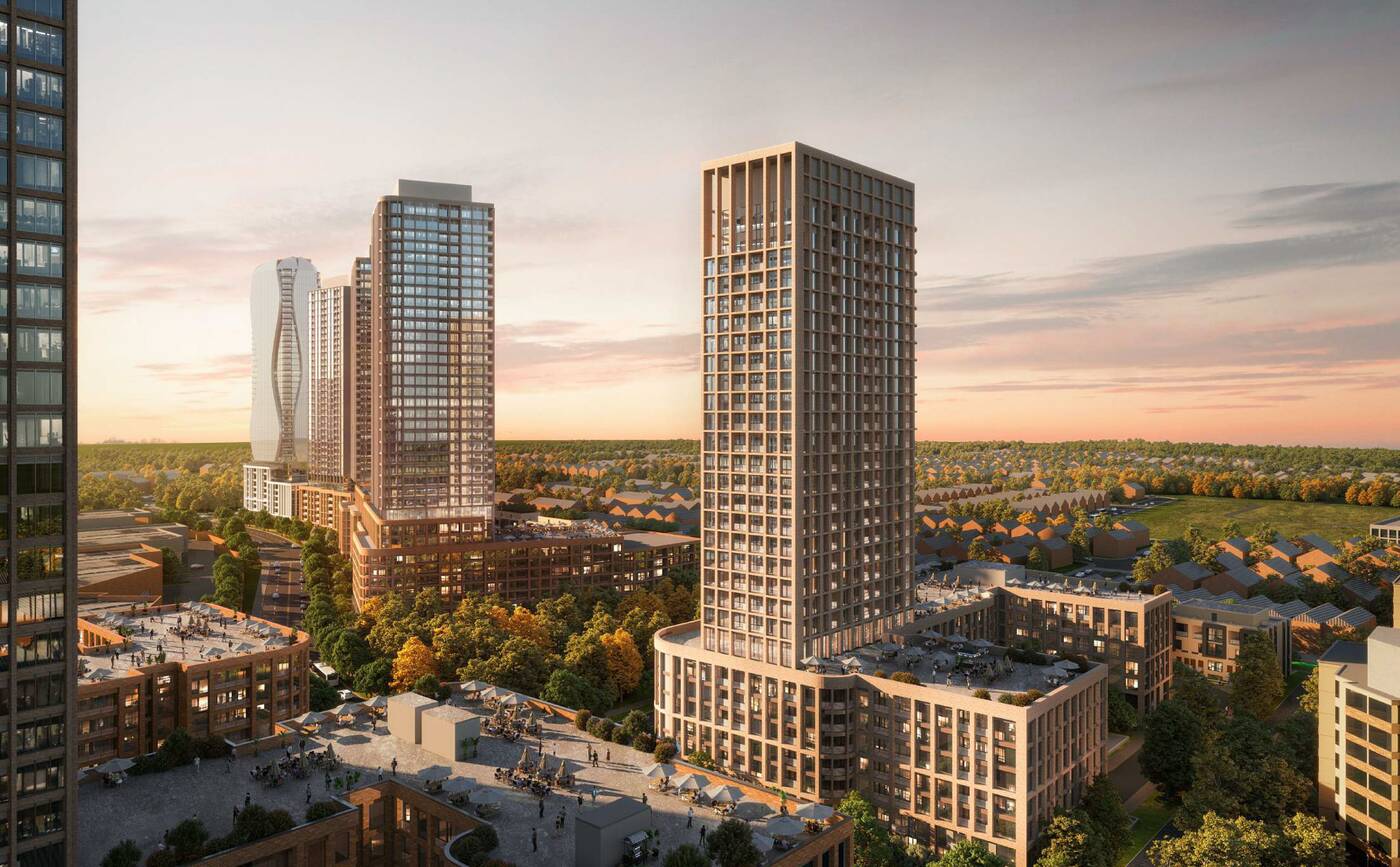 These buildings would combine for almost 375,000 square metres (just over four million square feet) of new development. The majority of the development is being planned as residential use, accounting for over 352,000 square metres, with the remaining space to include office and retail uses, as well as a new 9,065-square-metre public park. 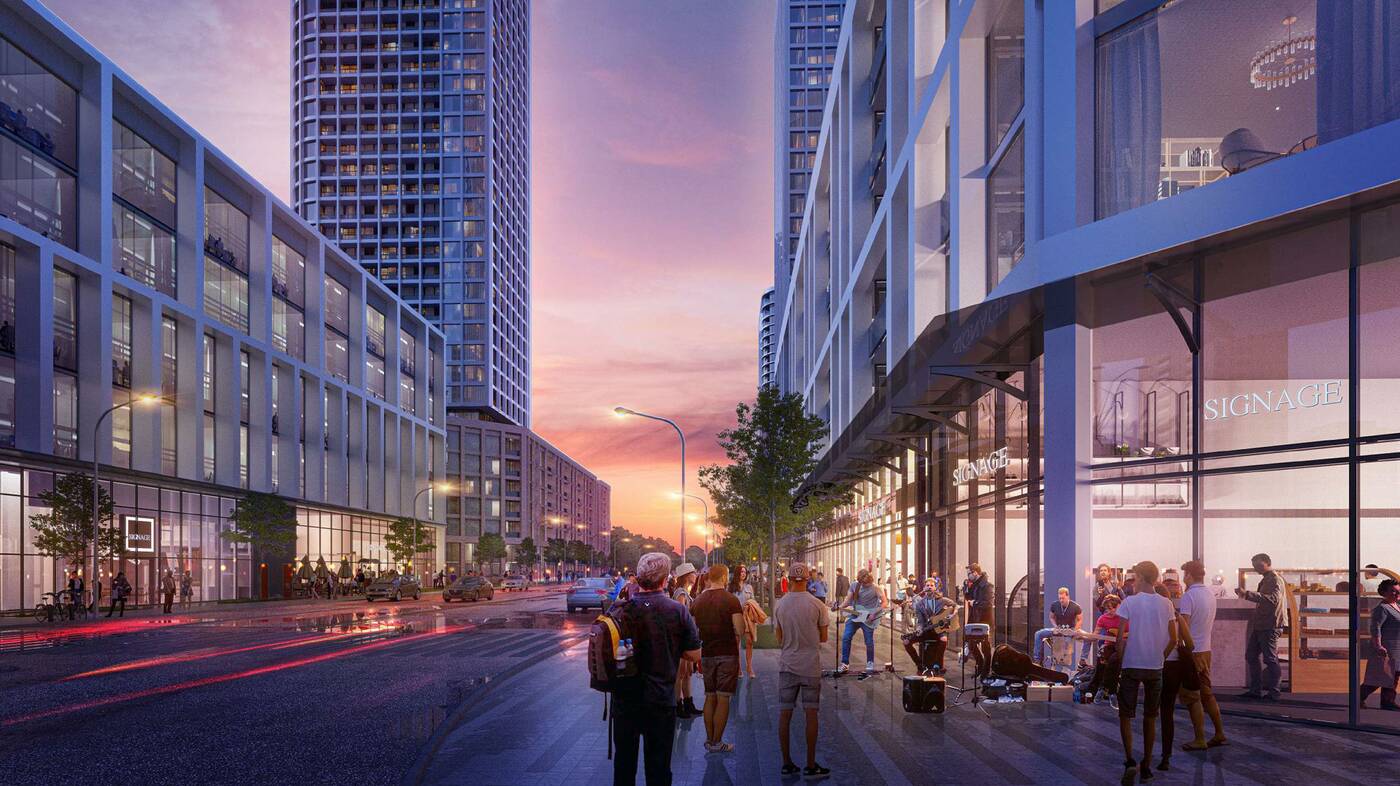 View looking east from the south side of Elia Avenue at 4615 Hurontario Street site. Rendering by BDP Quadrangle.

Nine towers would come with a huge boost in residential units for the area, the plan proposing a total of 4,690 units. 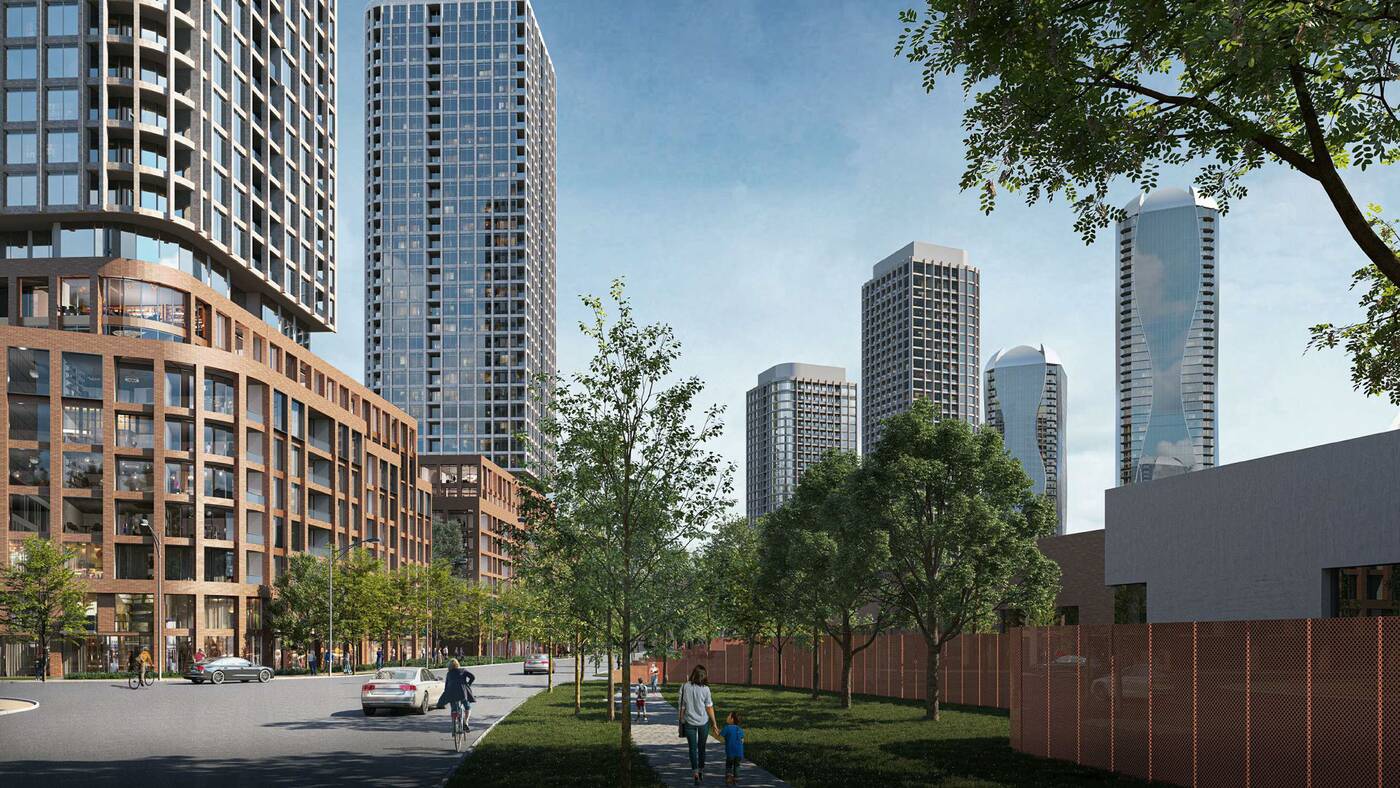 The majority would be housed in towers, though 120 of these units would be built into blocks of three-storey, back-to-back stacked townhouses in an effort to help buffer the new towers from the existing subdivisions to the east. 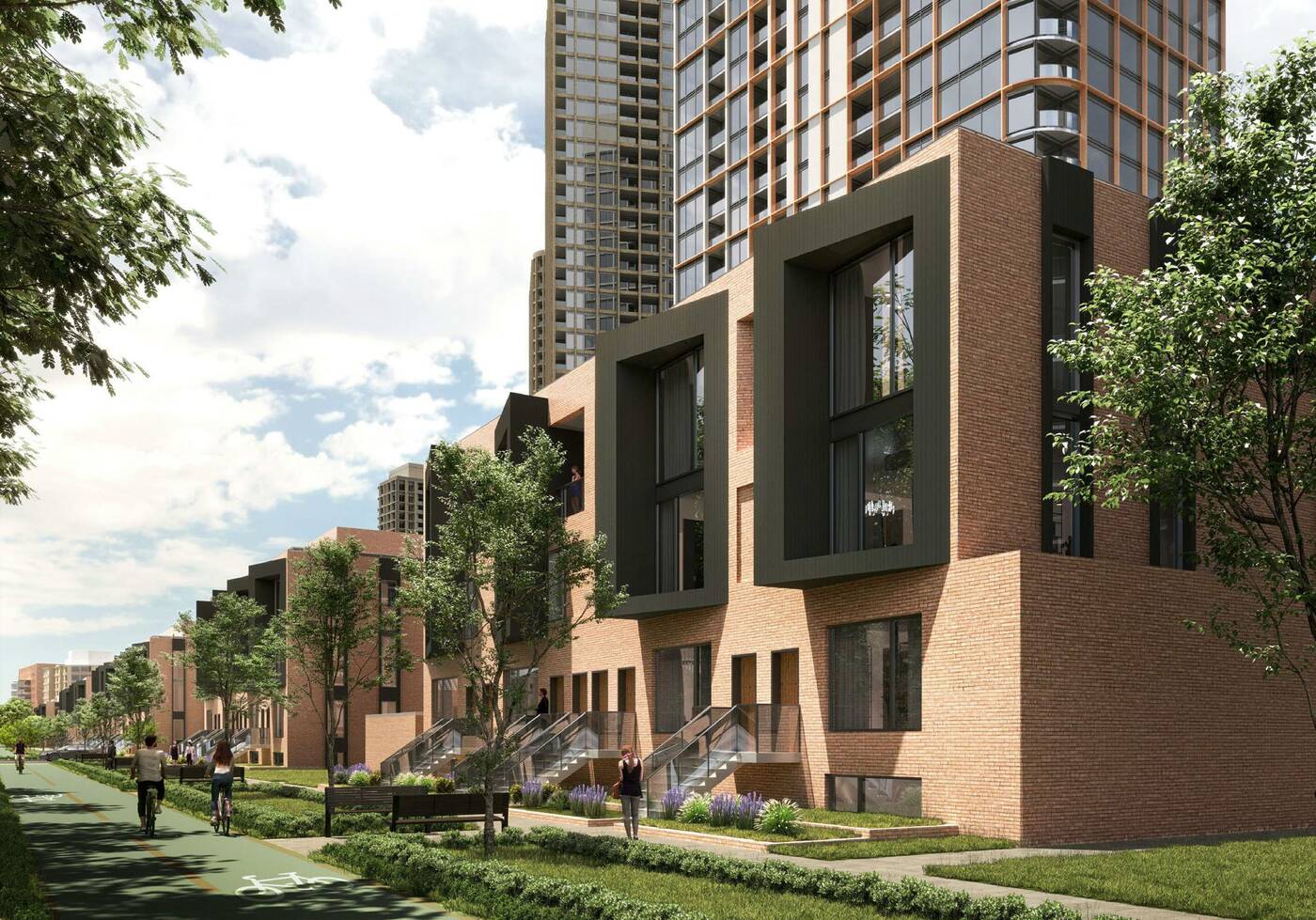 But this is still Mississauga, and even with a new LRT at the development's doorstep, developers are hellbent on preserving the car-dependant lifestyle of 905ers.

For the total of 4,690 units, the developer has proposed a staggering 5,429 parking spaces, meaning they expect buyers to need a ratio of about 1.15 cars for every home.