Average rent prices in Toronto have now been rising for seven months straight, as of October — a significant trend considering that they completely tanked amid the COVID pandemic, turning markets upside down both locally and in smaller cities all over Ontario.

And yet, while we've been seeing consistent price growth on a month-over-month basis since last spring, we had yet to see rents tick up year-over-year in the GTA until now.

The latest Toronto GTA Rent Report from Bullpen Research & Consulting and TorontoRentals.com shows that October marked the first month since March of 2020 that average rents in the Greater Toronto Area actually increased compared to the year previous.

When broken down by specific areas of the region, however, we see some wild deviations in rates of price growth. 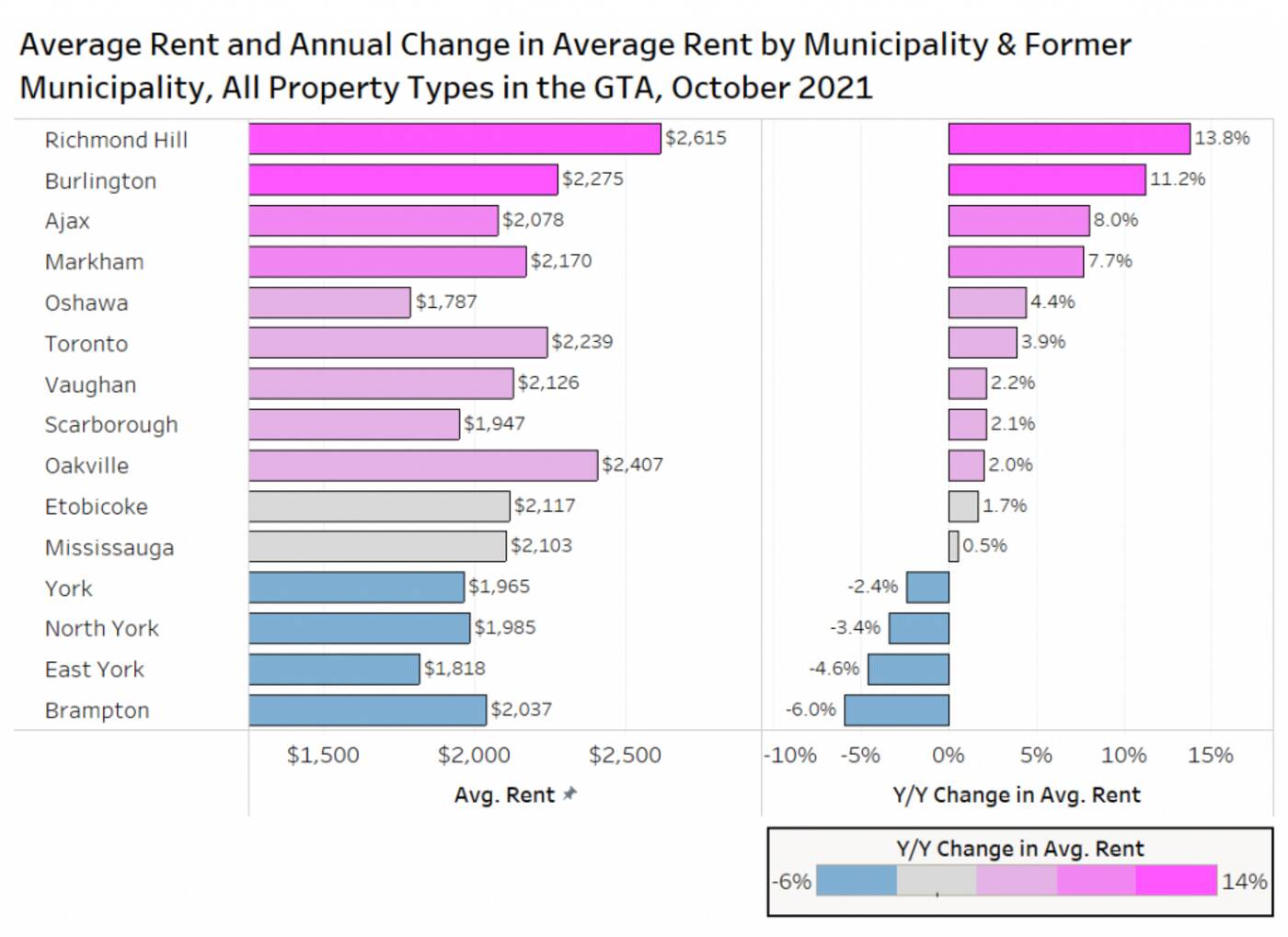 Rents are starting to go up modestly in Toronto as we near the end of 2021, but prices are exploding in nearby suburbs such as Richmond Hill, Burlington and Ajax. Image via TorontoRentals.com.

Toronto proper experienced an annual increase of 3.9 per cent in October, according to the new rent report, while average rents for Richmond Hill, Burlington, Ajax, and Markham all shot up by well over seven per cent during the same time period.

"The narrative that tenants are fleeing the downtown core for larger units in suburban areas is still showing up in the data," notes the report.

Whether despite or because of more activity on Toronto's rental market lately, the "mass exodus" of young renters from Toronto's downtown core observed earlier in the pandemic appears to be ongoing.

One only needs to look at the record rent price spikes in Ontario cities far beyond the GTA's border to see continued evidence of this trend.

Skyrocketing rents in coveted downtown neighbourhoods could be driving some Torontonians into the arms of our city's suburbs, especially as the vast majority of office employees continue to work from home. 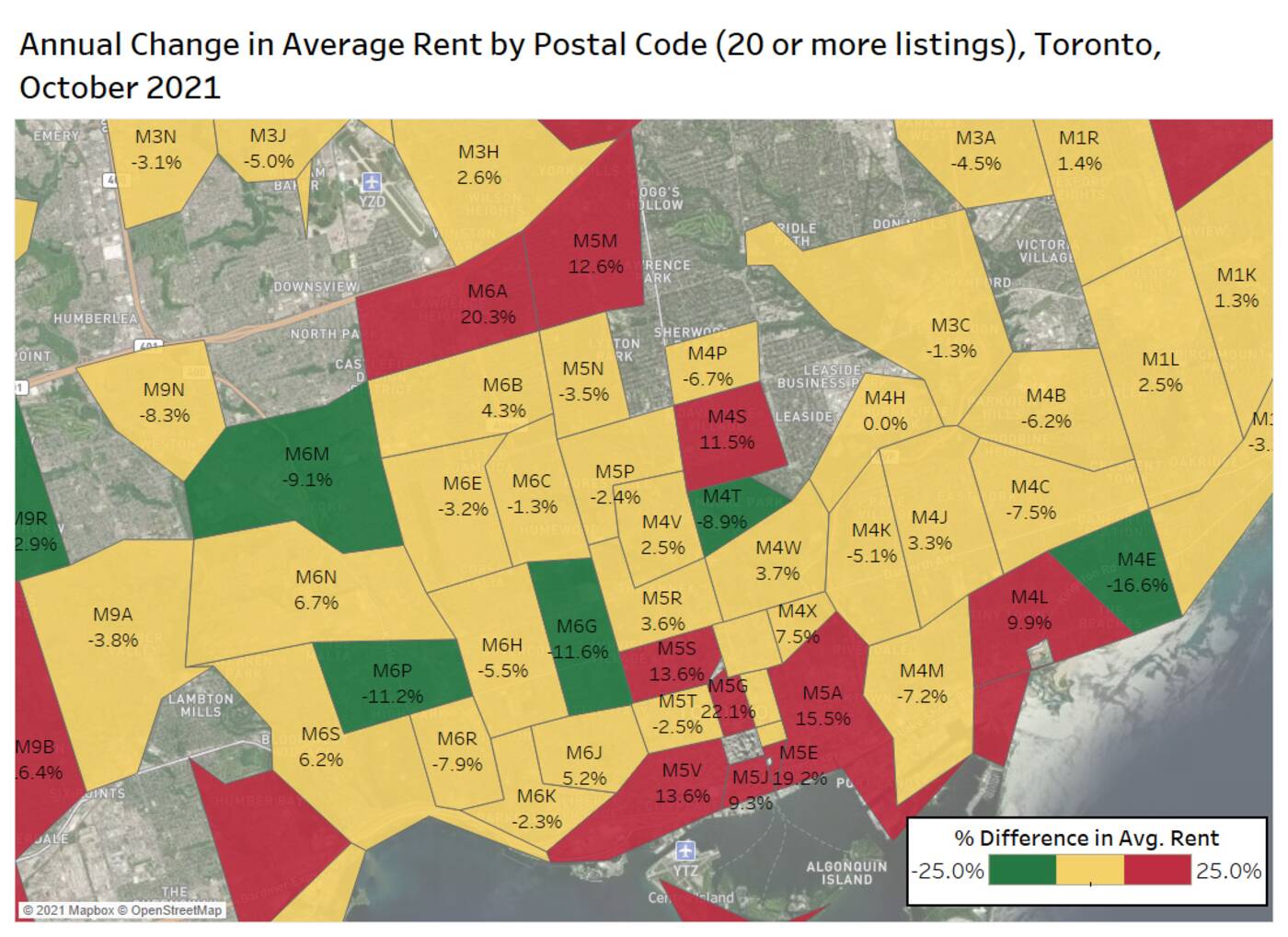 Toronto rent prices are on the rise again after bottoming out in January of 2021, but some postal codes are seeing faster growth than others. Image via TorontoRentals.com.

What's the point of paying exorbitant prices to live in the M5V or M5A waterfront postal codes, which shot up by 13.6 per cent and 15.5 per cent respectively last month, when you could do your job from a larger, less-expensive pad in Brampton?

It's a question people are clearly considering as the city slowly starts to reopen and rent prices climb back up.

We're also seeing data that suggests some types of units are more in-demand than others, influencing where renters might choose to live within the GTA. Average monthly rents for single-family homes, which are in notoriously short supply downtown, just rose 16.6 per cent year over year across the Greater Toronto Area.

"Condo apartments, after a long period of annual declines, are on the path to recovery as average rental rates look to move higher than the early 2020 levels. Moving forward, look for these trends to continue as the economy recovers and returns to normal."