Toronto rent prices continued to rise — albeit ever so modestly — between July and August of 2021, marking the fifth consecutive month of increases after 14 straight months of unprecedented declines.

Rents went up 0.9 per cent on average across the entire GTA last month, reaching $2,097 according to a freshly-released report from Bullpen Research and TorontoRentals.com, though some parts of the region saw far greater gains than others.

Prices are also still significantly lower than they were before the COVID-19 pandemic turned Toronto's rental market on its head: On a year-over-year basis, average rents are down four per cent in total.

The two-year figure is even harsher, putting rents a whopping 14 per cent lower than the $2,450 average they reached in August of 2019. 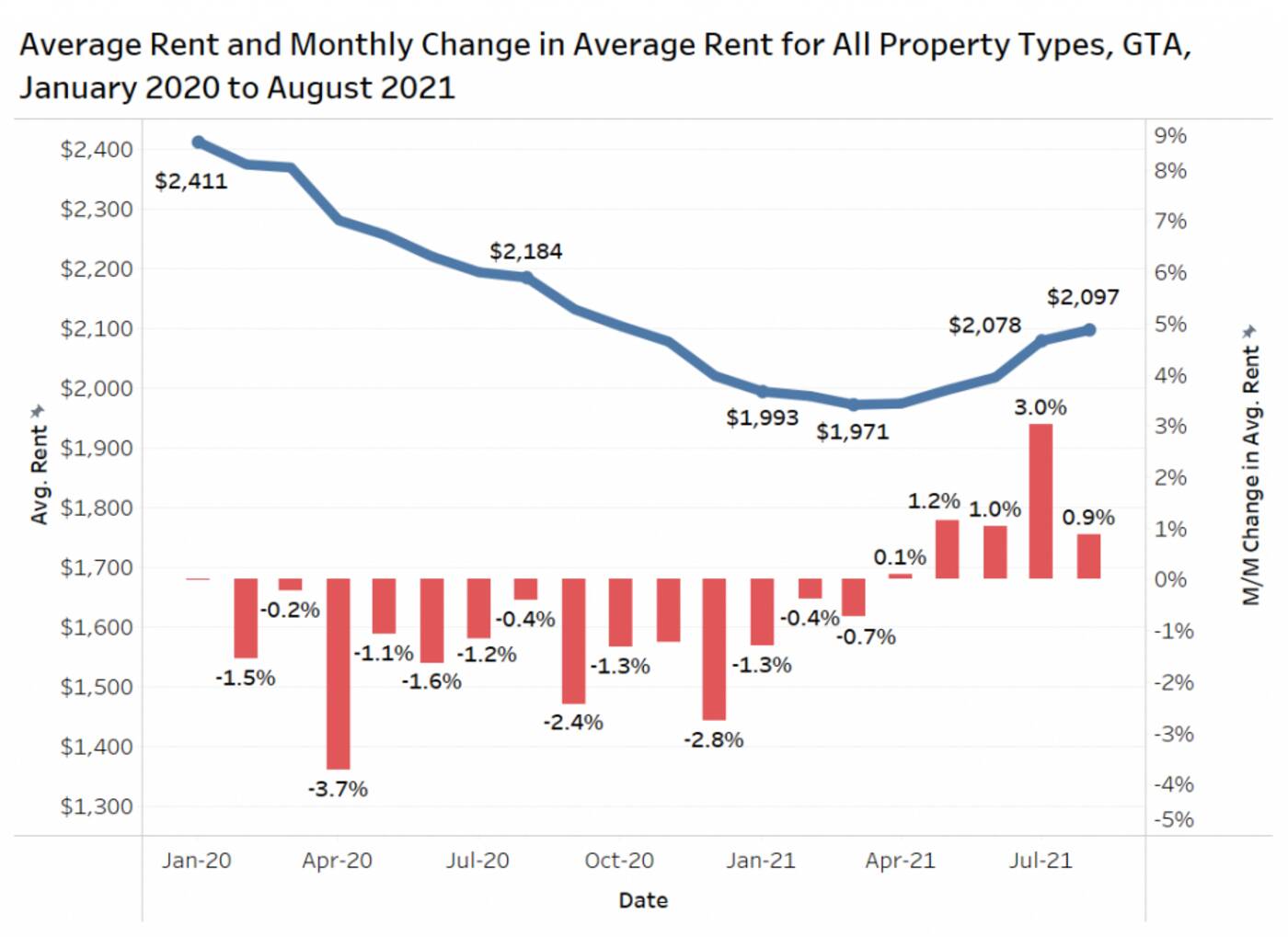 Average rent prices are rising in Toronto again after more than a year of declines, but have yet to recover to pre-pandemic levels. Image via torontorentals.com.

Experts have been saying for months that they expect rent prices to continue trending upward, intensifying as lockdown restrictions lift and immigration rates soar.

"After several months of large rental units leading the recovery out of the pandemic-induced rental slump, smaller units were popular in August, with average rents for one-bedroom units increasing by a whopping five per cent monthly in the GTA," said Bullpen Research & Consulting president Ben Myers when releasing his agency's latest report.

"The market bottom is now clearly in the past, with many of Toronto's most desirable neighbourhoods seeing average rents increase by $200 to $350 per month over the last six months."

While slow-going thus far across the board, some types of units are rising in value at an above-average rate.

The average monthly rental price for one-bedroom units across all property types (condo apartment, rental apartment, townhouse, basement and single family home) shot up by 5.1 per cent month-over-month to reach $1,864.

Prices for three-bedroom units, on the other hand, fell 4.2 per cent on average between July and August, while studios increased by 1.4 per cent to reach $1,525 and two-bedrooms by 1.3 per cent to hit $2,308 per month.

Broken down by price-per-square foot, studios actually saw the biggest uptick at 9.9 per cent, followed by one-bedrooms at 7.2 per cent. 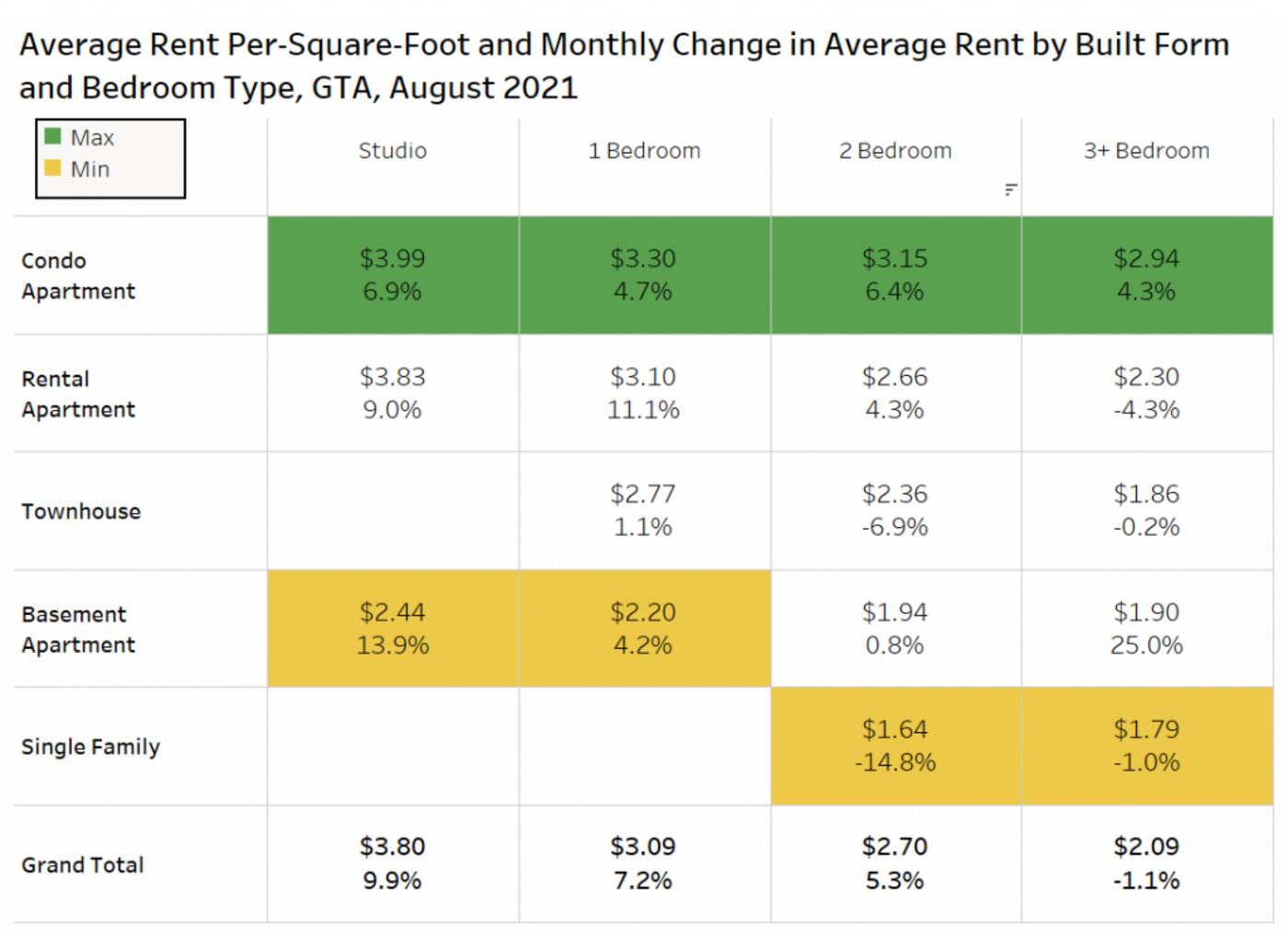 The average rent price for a basement studio apartments is increasing faster than any other type of unit in the GTA right now. Image via torontorentals.com.

In addition to unit sizes, there are specific parts of the GTA in which rent prices are rising more quickly than average: Whitby and Scarborough, for instance, saw prices rise by 6.6 per cent and 3.9 per cent respectively between July and August.

The City of Toronto meanwhile experienced a growth rate of just 0.7 per cent.

And of course, rent prices continue to vary widely across the 416 itself, with the highest rents in Toronto now found in the University neighbourhood at an average of $2,459 per month. Rosedale-Moore Park boasts the second-highest average price across all unit types and sizes at $2,437, followed by the Bay Street Corridor at $2,408.

Those looking for less-expensive options will find the best values in Wallace Emerson for studios, South Parkdale for one-bedrooms, Cabbagetown-South St. James Town for two-bedrooms and Islington-City Centre West for units with three or more bedrooms. 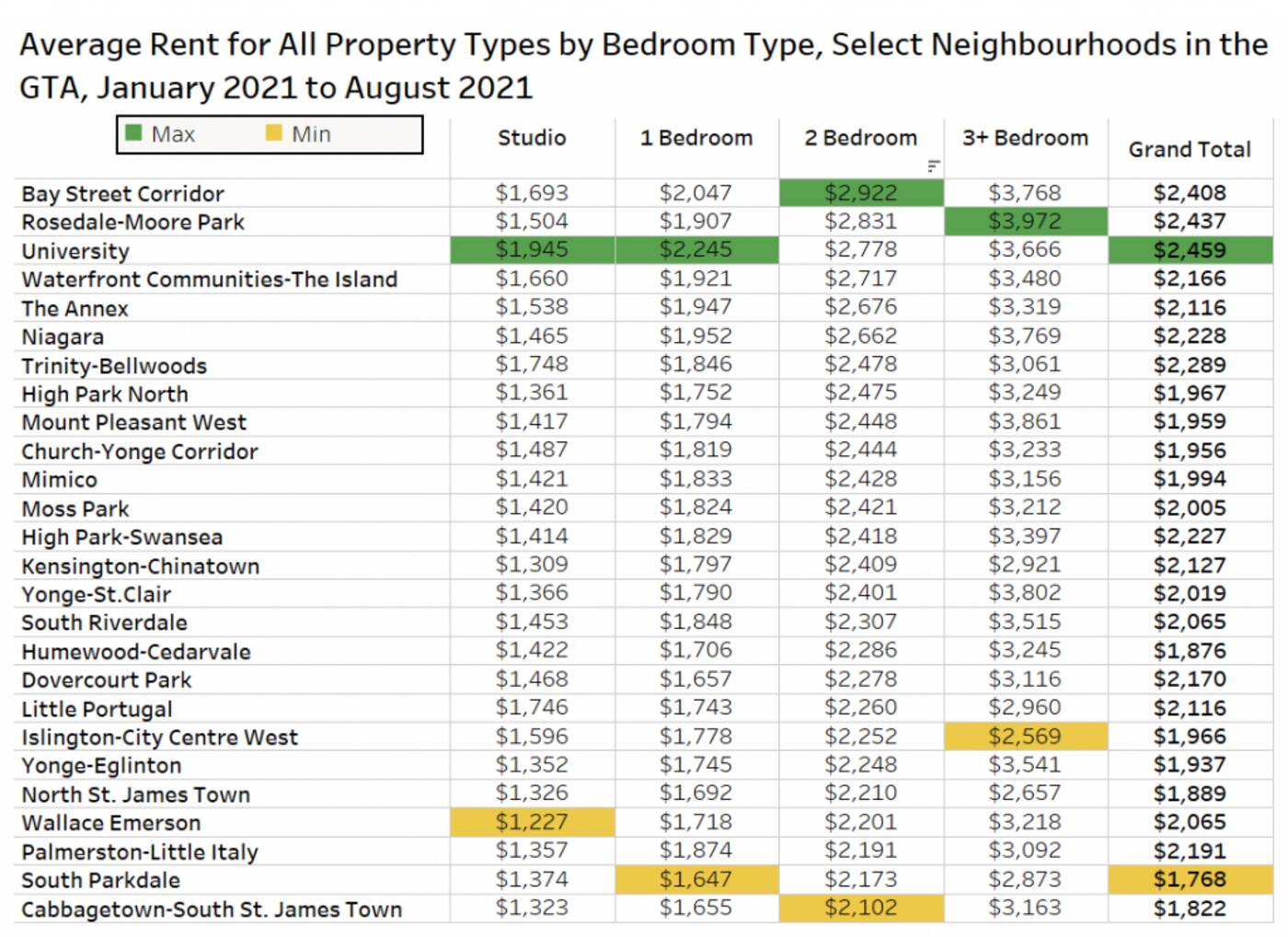 University is the most expensive neighbourhood to rent a place in Toronto right now for studios, one-bedrooms and across the board. Image via torontorentals.com.

Overall, Parkdale holds strong as the least-expensive neighbourhood for renting in Toronto across all unit types, but that could change fast, as you can't bank on anything in this city for long.

"Despite some concerns regarding the fourth wave, a return to normalcy continues in the GTA with colleges and universities opening up, as well as primary schools, malls, retail establishments, gyms and downtown office buildings," reads the rent report.

"With all of these things happening, the GTA rental market is returning to normal, which typically includes monthly rent increases as demand outstrips supply."