A charming historic building built near Toronto's eastern waterfront as a fire hall more than 100 years ago will soon be moving from its longtime location at 39 Commissioners Street to make way for new infrastructure as part of the enormous Port Lands Flood Protection project.

"When we finish Port Lands Flood Protection in 2024, the Port Lands will have been transformed from post-industrial lot to parks surrounding a new river," explains Waterfront Toronto in a new post about the relocation of Fire Hall No. 30.

The "why" of the matter is quite obvious: The structure must move, but it can't (and shouldn't be) destroyed. The "how" is a little more complicated. 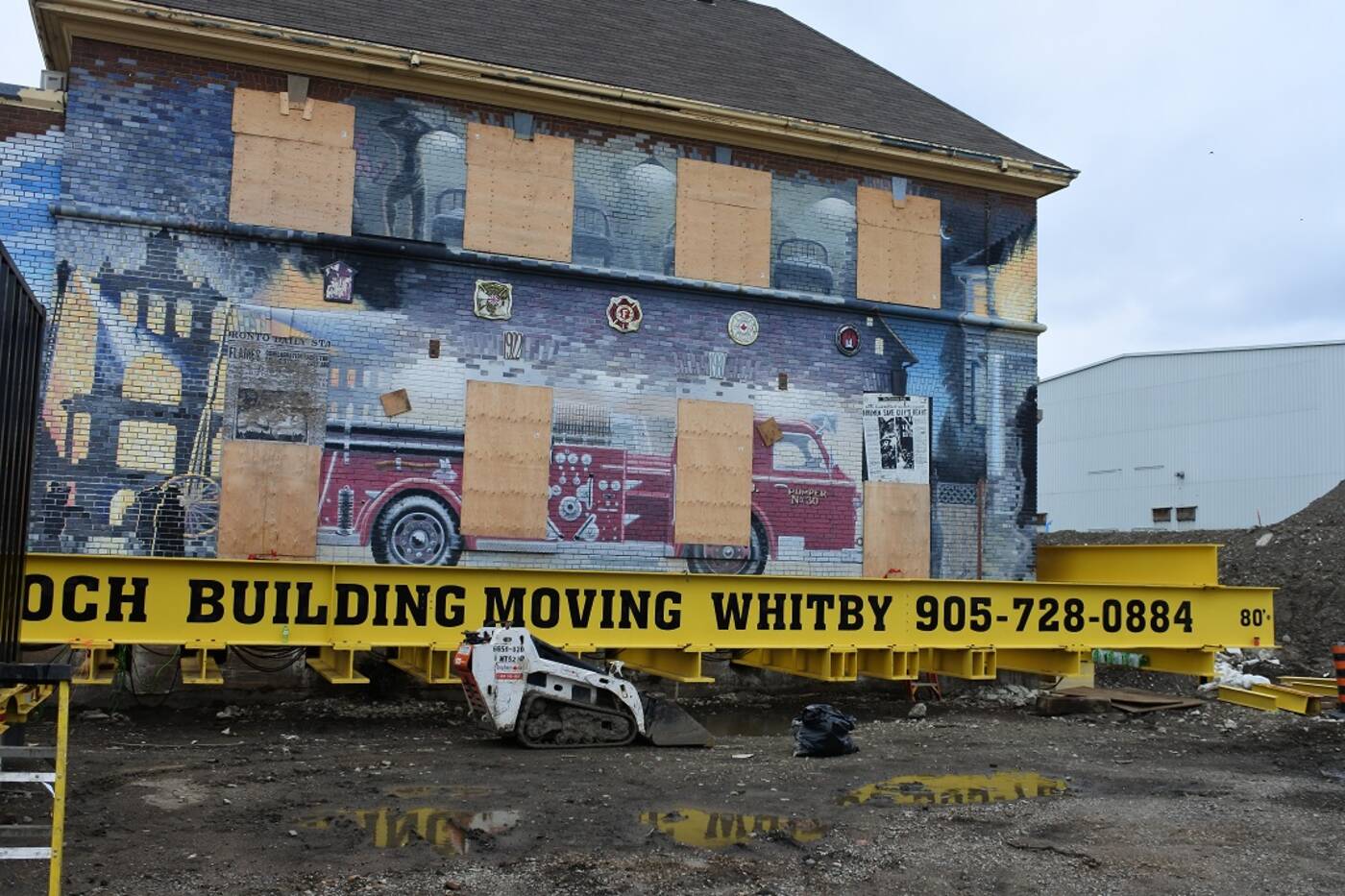 Completed in 1922 by architect J. J. Woolnough, Fire Hall No. 30 (otherwise known as the Ashbridge's Bay Fire Hall) was added to the City of Toronto heritage register in 2003 for its "Edwardian Classical styling" and historic "fire hall typology," among other features. It is also protected under the Ontario Heritage Act.

The building was used as a fire hall until the 1980s, but now sits vacant, right in the path of what will soon be a raised and widenened Commissioners Street.

"Port Lands Flood Protection will protect 240 hectares of land from flooding. As part of the design for flood protection, we need to raise Commissioners Street by one to two metres and widen the street," writes Waterfront Toronto, a consortium of officials from all three levels of government.

"The current location of Fire Hall 30 is in the path of the improved road. It will be moved back 78 feet and raised to the new grade in order to preserve the building and allow for work on Commissioners Street." 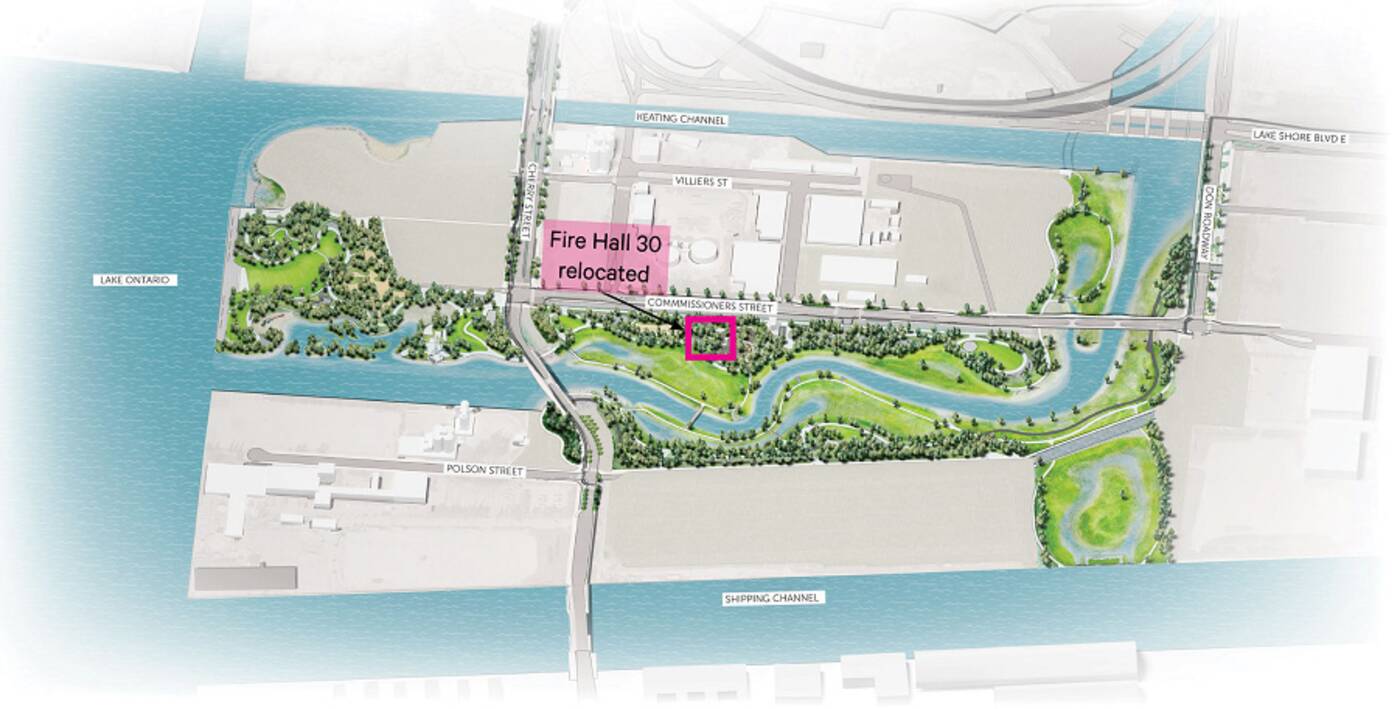 Fire Hall No. 30 must be relocated to make way for a new-and-improved Commissioners Street. Image via Waterfront Toronto.

The move will not only help protect the historic building from water damage, it will make way for new infrastructure that is expected to protect some 240 hectares of land in and around the Port Lands from future flooding.

The fire hall will also live on as a key part of River Park South — one of several sprawling green spaces being created alongside the brand new Villiers Island.

"This relocation brings new purpose to the old Fire Hall 30. In its new location, it will have a front row seat to the action in River Park South," reads Waterfront Toronto's latest blog post.

"Sitting on the edge of the main entry plaza into the park, the hall will be near one of the new playgrounds and be partly renovated to hold six washrooms." 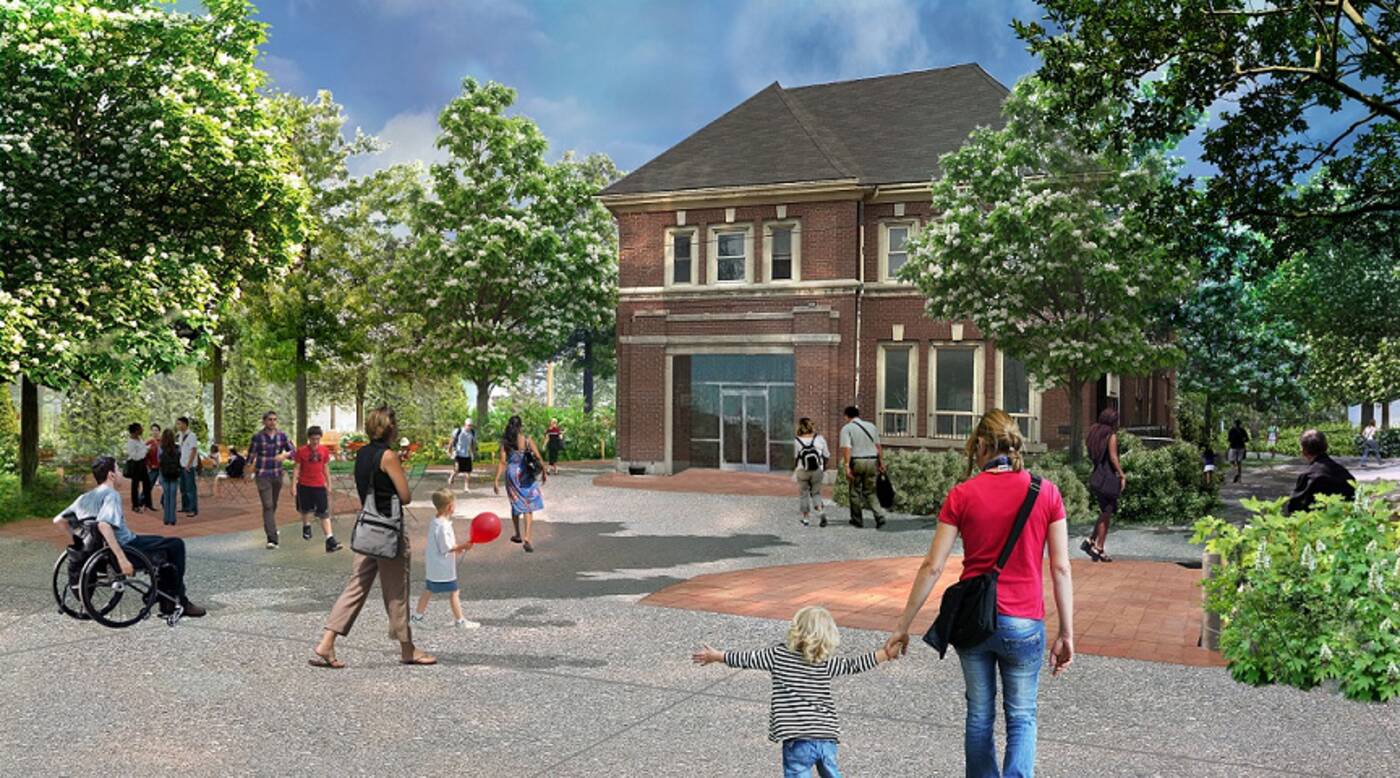 This rendering of the future River Park shows the fire hall restored to serve as a "key view terminus for the historic corridor." Image via Waterfront Toronto.

Now as for how they'll be moving the building, the consortium lays it all out in a three-step plan on its website, noting that "because the Port Lands were created by filling in a marsh, the soil around the Fire Hall is not very stable."

The soil's "soft, squishy consistency" means that the building's foundation must first be reinforced to support its own weight before it is lifted from the ground.

"The hydraulic jacks are attached to a machine that raises each jack the same amount at the same time, keeping the building stable as the cribbing is placed," says Waterfront Toronto. "Cribbing is built by cross stacking wooden blocks, similar to the wood in a log cabin. This forms a vertical rectangle that grows upright as more wood is added and the structure rises." 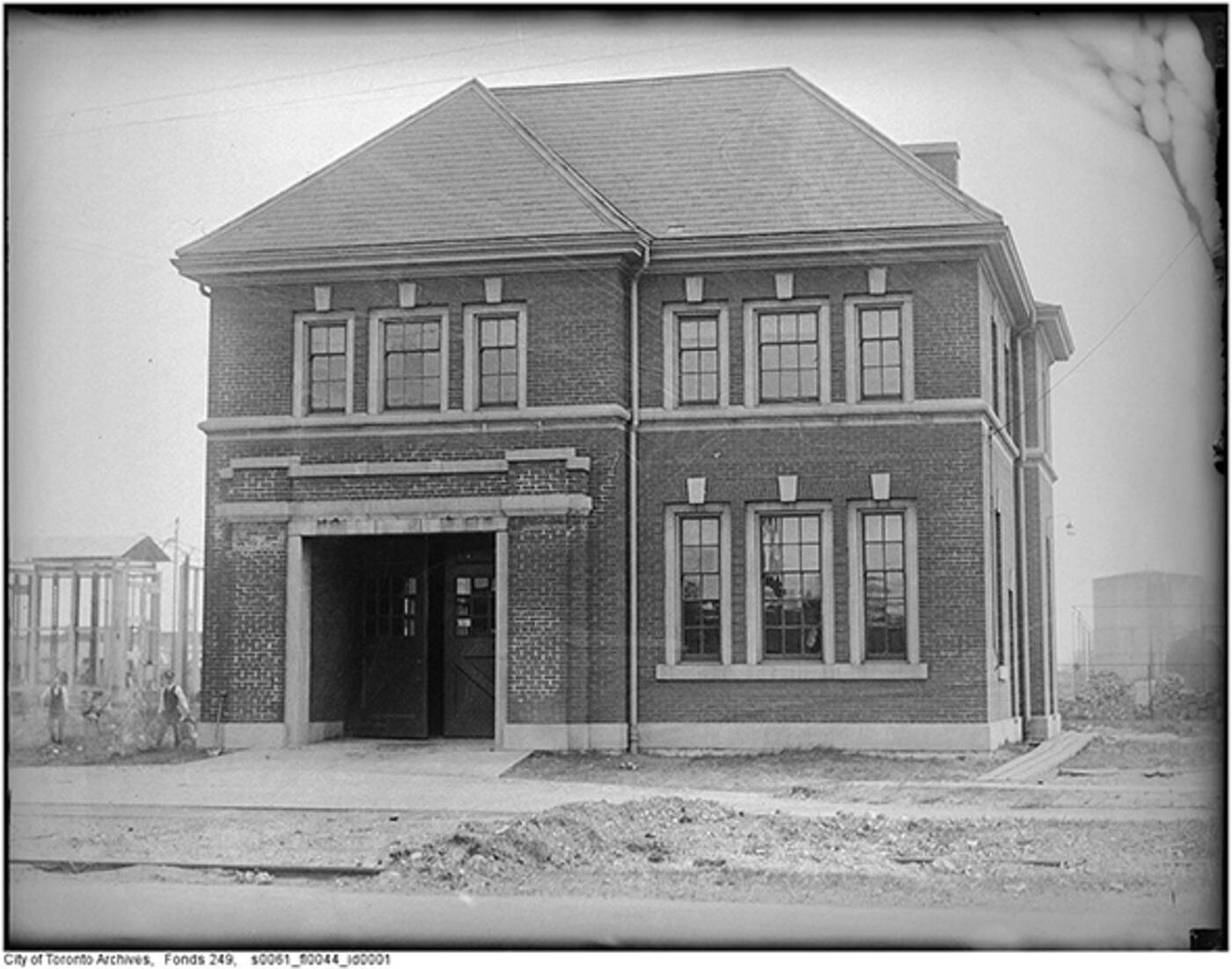 The fire hall was built by architect J. J. Woolnough in 1920s as Fire Station No. 30 but has not been in operation since the 1980s. Image via Toronto Archives.

Step 3 will see steel beams placed through the aforementioned cribbing and secured before the building is finally picked up and moved 78 feet south.

No word yet on when the structure will actually be transported, but excavations are already well underway for the Don Valley River's new mouth.

When all is said and done with the $1.25 billion Port Lands Flood Protection project — an undertaking Mayor John Tory has described as "one of the largest waterfront revitalization projects in the world" — a new, one-kilometre-long channel will stretch across the area.

While complicated to pull off, the work should drastically reducing flood risk in Toronto's southeastern downtown region, and will effectively create a new urban island and mixed-use community, purpose-built with nature in mind and respectful of the neighbourhood's rich history.