There are four times as many legal weed dispensaries (213) as there are dedicated liquor stores (50) in Toronto right now, according to the OCS and LCBO websites.

That's 213 licensed cannabis retailers across 630 square kilometres of space, with dozens more in the application process awaiting authorization from the AGCO to launch.

How on earth are they all surviving? Are that many people buying that much product? Is this cannabis boom headed for a big bust?

People in neighbourhoods where new pot shops now crop up faster than "for lease" signs can be installed have been asking these questions for more than a year — ever since the provincial government scrapped its licence lottery and removed the cap on how many legal dispensaries could operate.

To walk down Queen Street West, Queen Street East, Ossington Avenue or any number of hip strips in the 6ix right now, it's almost hard to believe that only 25 brick-and-mortar weed stores were initially allowed to open across Ontario (just five of them in Toronto) after the federal government legalized recreational marijuana.

Toronto's first five weed stores were given the green light to launch in April of 2019, more than half-a-year post-legalization, and subsequent rounds of licence lotteries saw at least 42 more approved by the end of that year.

The AGCO lifted store number caps (amond other restrictions) for pot retailers in January of 2020. The ability to apply for new store authorizations was opened up to everyone on March 2, prompting a flood of interest and applications.

And then the COVID-19 pandemic hit, throwing the retail landscape into freefall as lockdowns kept businesses closed for months at a time.

Weed dispensaries (many of which are still "coming soon") were quick to scoop up spaces left behind by shuttered bars, restaurants and retail stores.

A few cannabis shops have now even replaced Starbucks — itself once scorned for being too ubiquitous, a harbinger of gentrification and rising commercial rents.

1990s Toronto commentariat: STARBUCKS IS TAKING OVER MY FAVOURITE SPOT

2021 Toronto twitterati: MY FAVOURITE STARBUCKS IS BEING REPLACEDhttps://t.co/5fnPpbsAqy

As lockdown restrictions lift and people begin to live their lives somewhat normally, the question remains: How many weed stores can one city — scratch that — one city block support before there aren't enough customers to go around?

"The location is designed to be capable of serving over 300 customers a day." 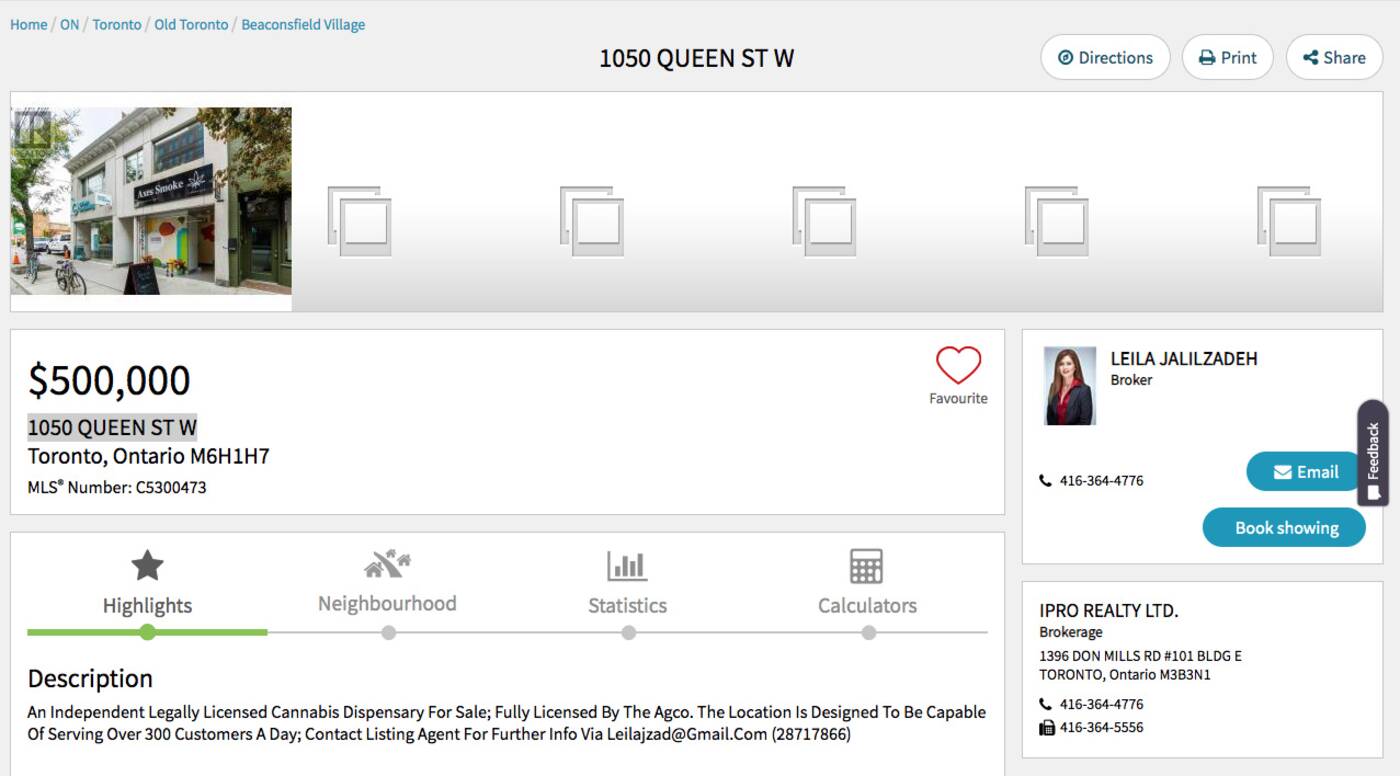 Canna Clinic in Kensington Market also appears to be up for sale at $699,999. Billed as a "turn key" cannabis business opportunity, the listing is for the business only — not the property itself.

"Be up and running before the second vaccination. Fully licensed by the AGCO, this canna dispensary is ready to open its doors again," reads the listing for 44 Kensington Ave.

"This location has the AGCO, operator, location and manager licenses. It can be sold plug and play or combined with the individual ACGO licenses. Manager is in place if needed." 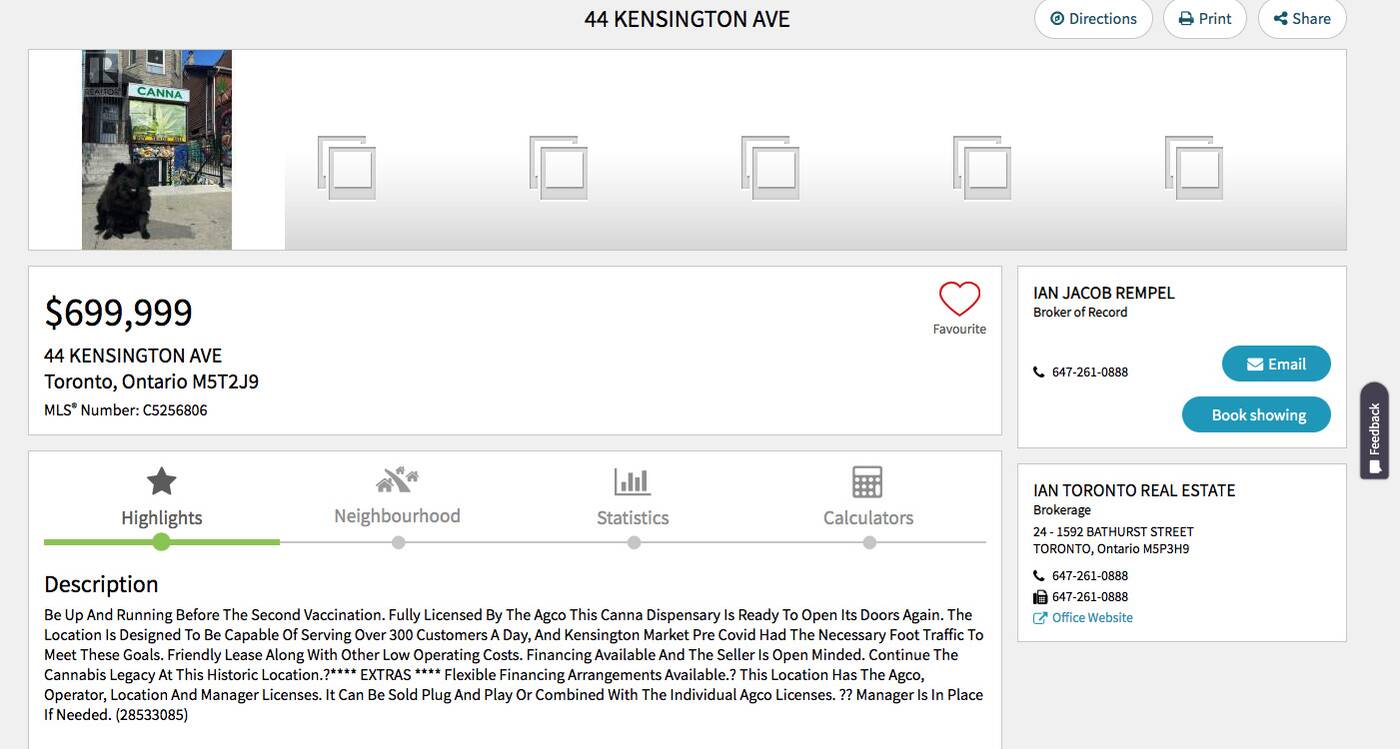 Several other licensed cannabis stores are up for sale in undisclosed locations around the city.

"One of a kind set up. No Royalties. All details of operational cannabis business handled up to and including grand opening," reads the listing for one that appears to be in a Vaughan strip mall.

"This is for qualified individuals or business people only. Please read ACGO (Alcohol And Gaming Commission) website for requirements." 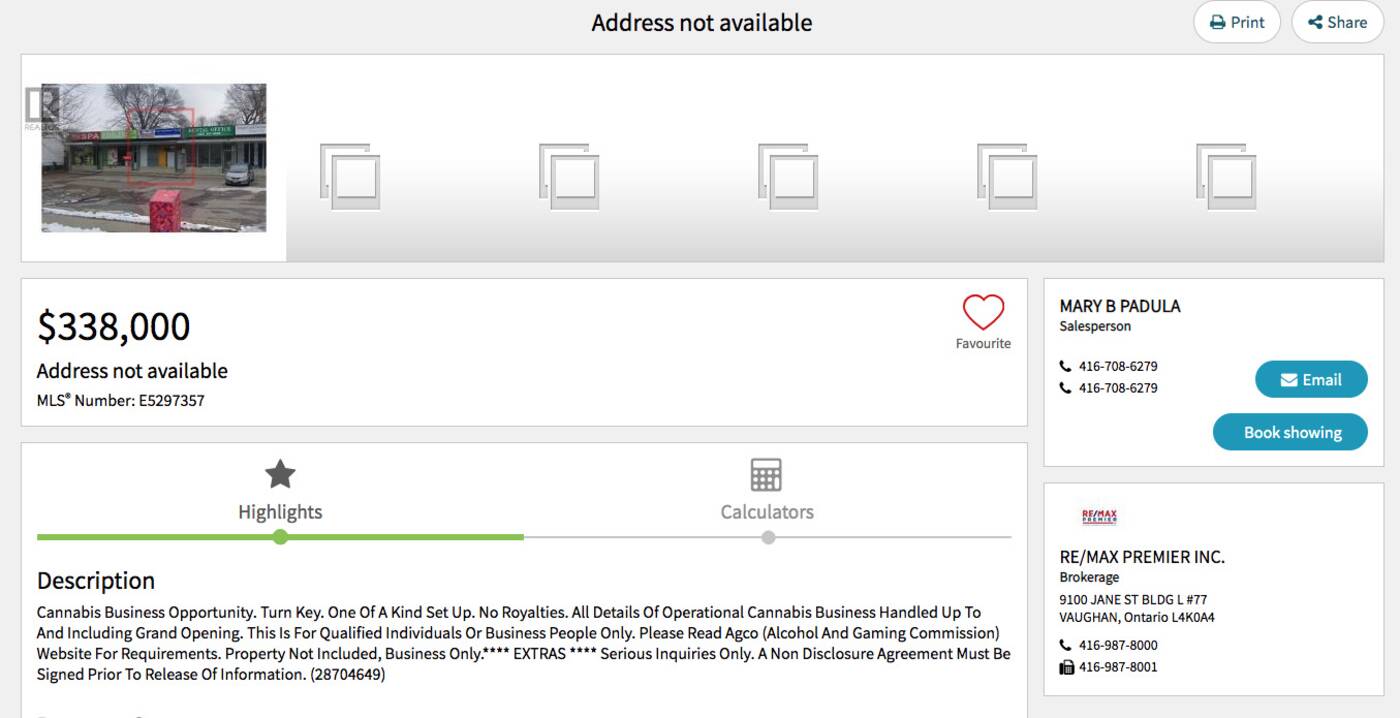 And then there's High Street Cannabis Retail in Queen West, site of the old "Condo Size" furniture and blinds store.

Currently open, this dispensary is on sale for a cool $1,989,888 and is described for buyers as a "unique opportunity to secure an independent legally licensed cannabis dispensary + laneway café in prime Queen West."

The fact that any of the businesses are up for sale does not mean that they are closing, or that they're not profitable — only that they're being sold, potentially even by investors who snatched up cannabis licenses early for this very purpose.

One listing for two stores in Toronto that does not include an address even goes so far as to boast that both legal dispensaries have just opened and are "doing nearly $100K a month in sales."

Only the future will tell if that's true, and if the over-saturation of Toronto's retail cannabis scene is as real as it looks.