Given that Ontario has become known as the lockdown capital of North America and Toronto specifically is still weathering what may be the longest forced business closures in the world due to COVID-19, it's no surprise that residents of the province are not exactly thrilled with how the government has handled the pandemic.

Compared to the rest of the world, Canadians overall have been pretty damn miserable while facing the health crisis, and Ontarians specifically have in many ways had it harder than the rest of the provinces and territories, at least based on new Misery Rankings from MacDonald Laurier Institute.

With the aim to "measure the burden that COVID has placed on Canadians and the effectiveness of their governments' response," the report, released on Tuesday, purports that people in Ontario have been the least pleased with their province's response, including lockdown restrictions.

Though people Alberta may be the most "miserable" when it comes to COVID numbers, government response and economic impacts combined, Ontario still came out as the province that has the largest measured "response misery" and was also named second most miserable overall. 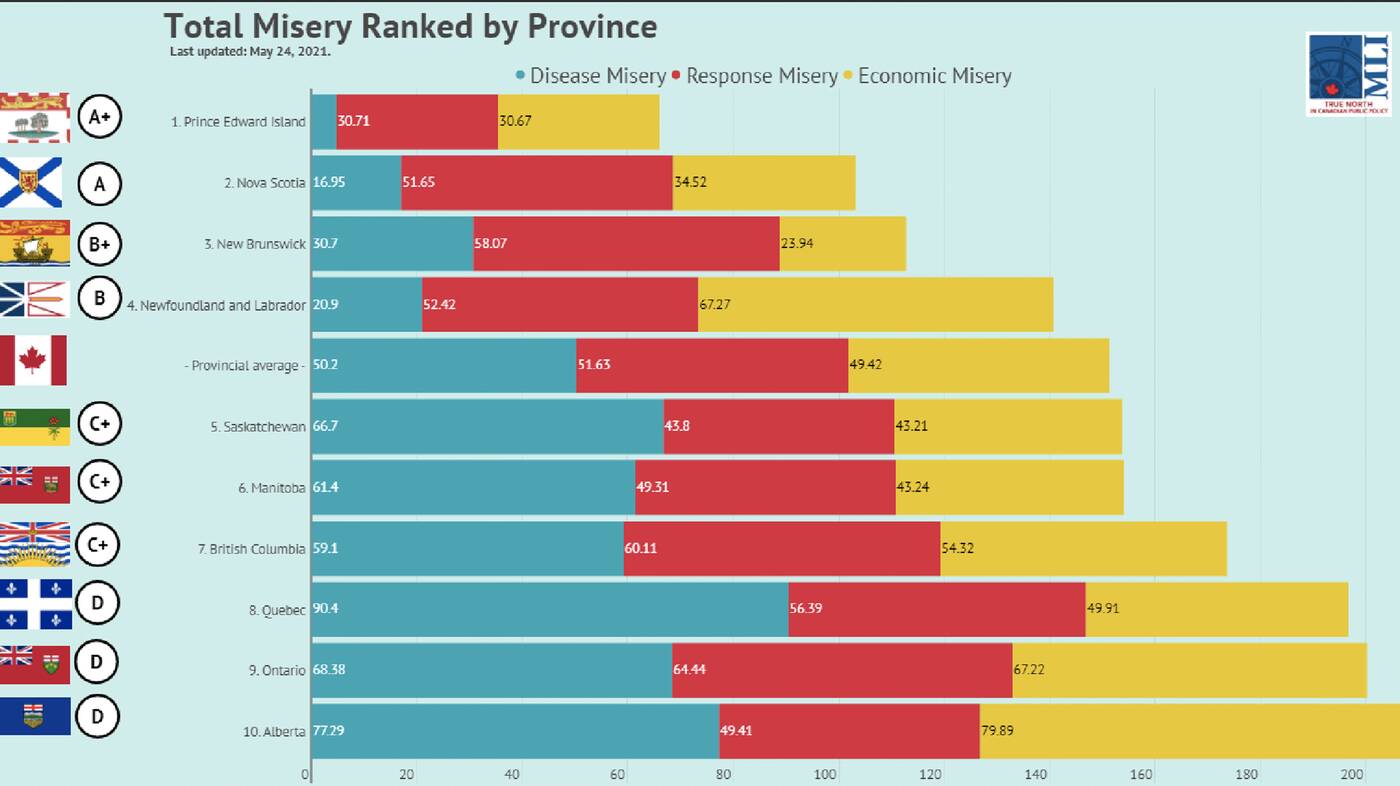 Chart showing how "miserable" residents of each province are when it coomes to the pandemic. From the MacDonald Laurier Institute's Provincial COVID Misery Index.

We also had the third-highest level of "disease misery" — meaning our COVID-19 numbers have been quite terrible, comparatively speaking — and the second-highest level of "economic misery" thanks to the fact that some business operations in some regions have been shuttered since October after being closed for most of last year.

Some of this is simply due to the fact that we are the most populous province in the country, and home to multiple large urban centres, including the biggest in the country.

But, Ontario's vaccine procurement and rollout was admittedly frustratingly slow at first, and our lockdowns have been among the strictest and longest, full of "suffering imposed by many days under stay-at-home orders, shuttered businesses and children stuck at home trying to learn online," as the report reads.

Time to end the bullshit @fordnation US state have reopened successfully, as can Ontario.
You are forever moving goal posts, first is was "2 wks to flatten the curve" now its 14 months later and we are still in lockdown with no end in sight. #firefordopenontario pic.twitter.com/qNDwHqlNPC

Though we may have experienced the worst of the pandemic compared to other provinces in some ways, hopefully this means we'll be more appreciative when measures finally begin to ease in a few weeks, regardless of how much the vast majority of us may now forever hate Premier Doug Ford and his team.