This $4.2M Toronto home comes with a treehouse bedroom

A home for sale in Toronto brings a bit of nature indoors with enormous windows and a rooftop patio overlooking a ravine.

The home at 49 Don River Boulevard in Toronto doesn't come cheap — it is listed for $4.2 million. 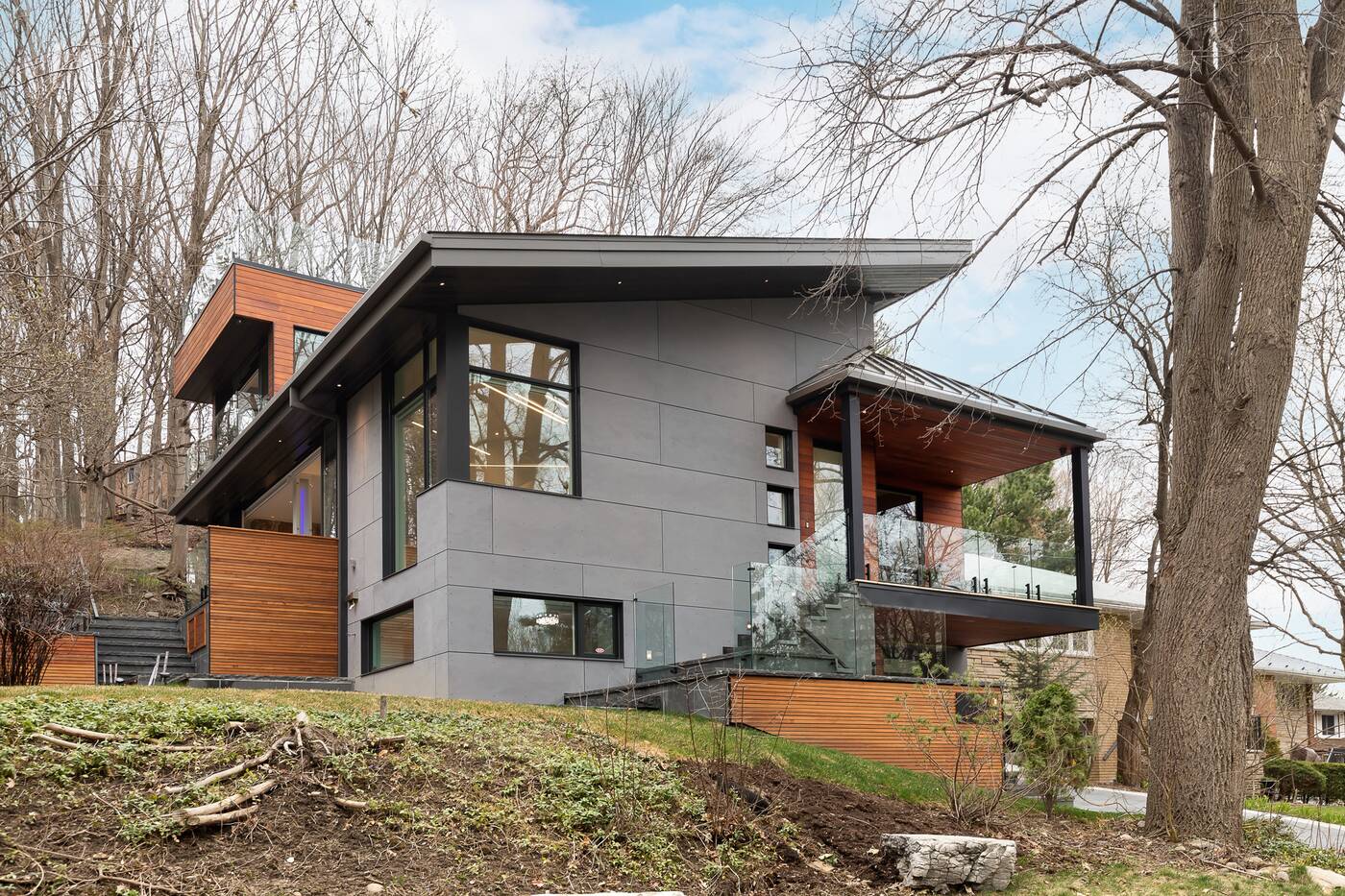 The home was just completed.

The original bungalow home on the property was built in the 1950s, but the new build has a second floor added as a primary suite with a roof top patio, said Eve Goldstein who designed the custom home.

"I call it the adult treehouse," Goldstein tells blogTO. "You can touch the trees." 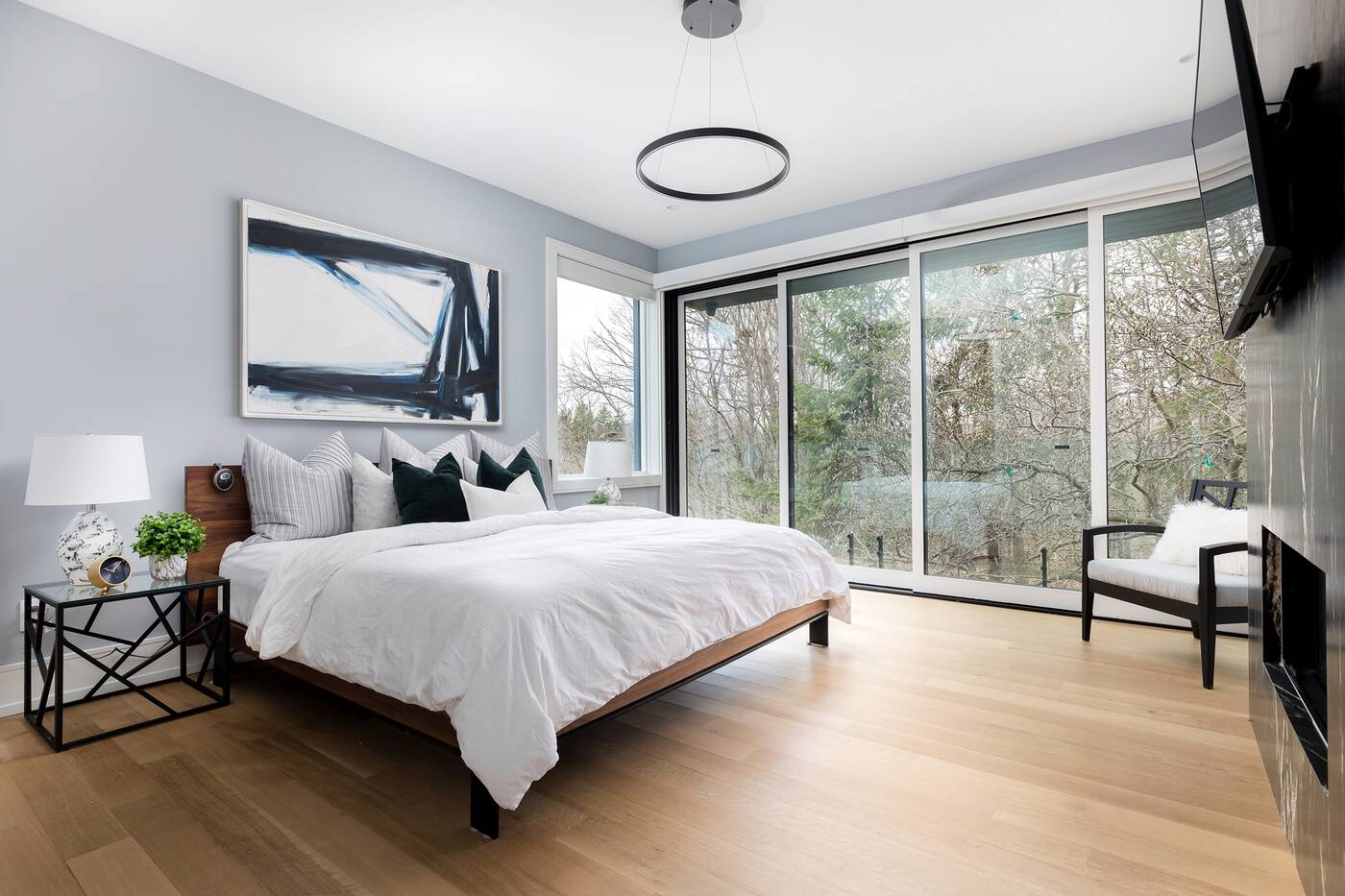 The main bedroom is on the top floor and is surrounded by trees.

The patio has glass panelling so there are unobstructed views of the surrounding forested area. 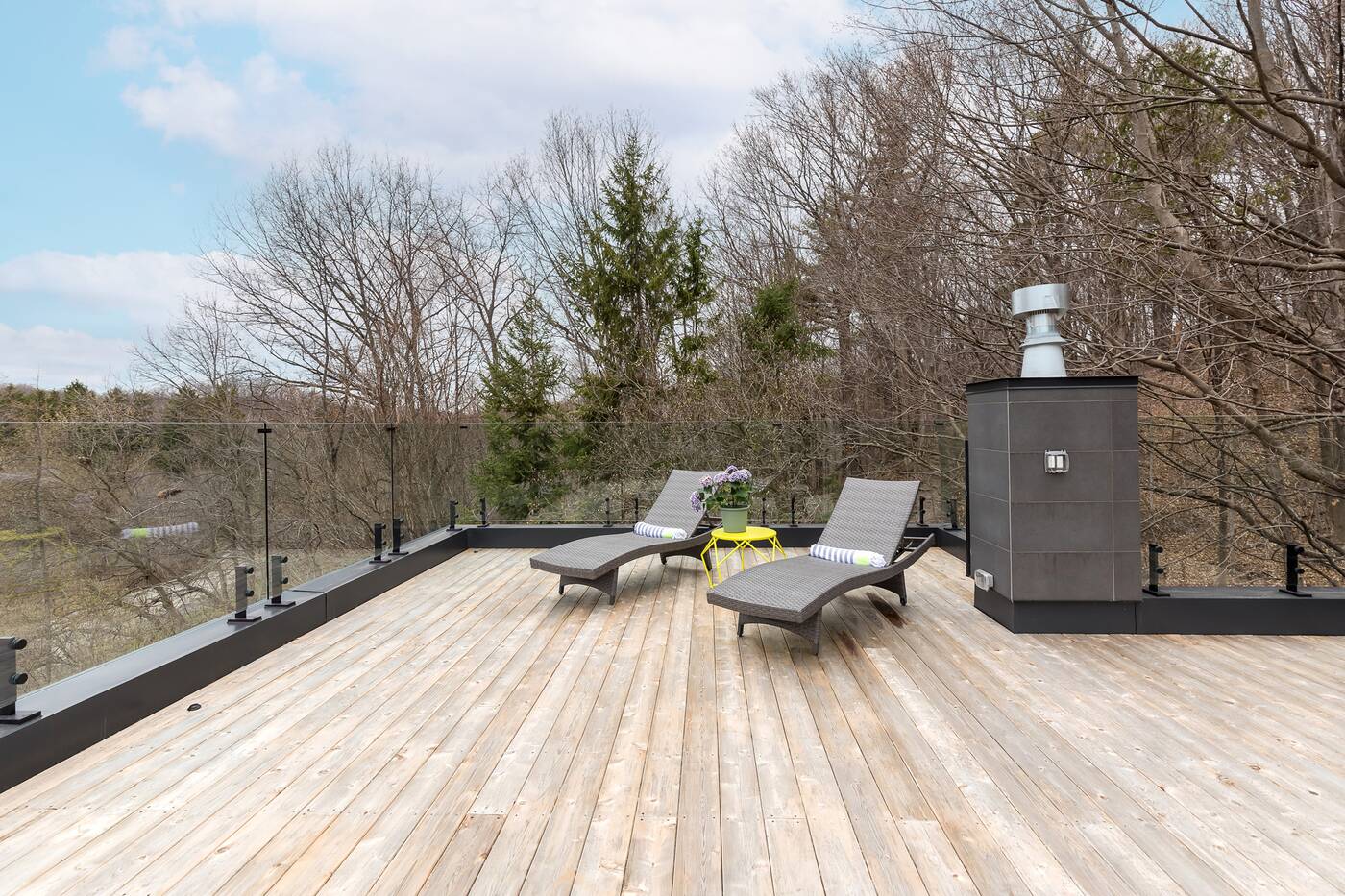 The rooftop patio has views of the ravine.

The four-bedroom home is perched on top of a hill in the middle of the Don Valley ravine.

"It is just a sensational view," she says. 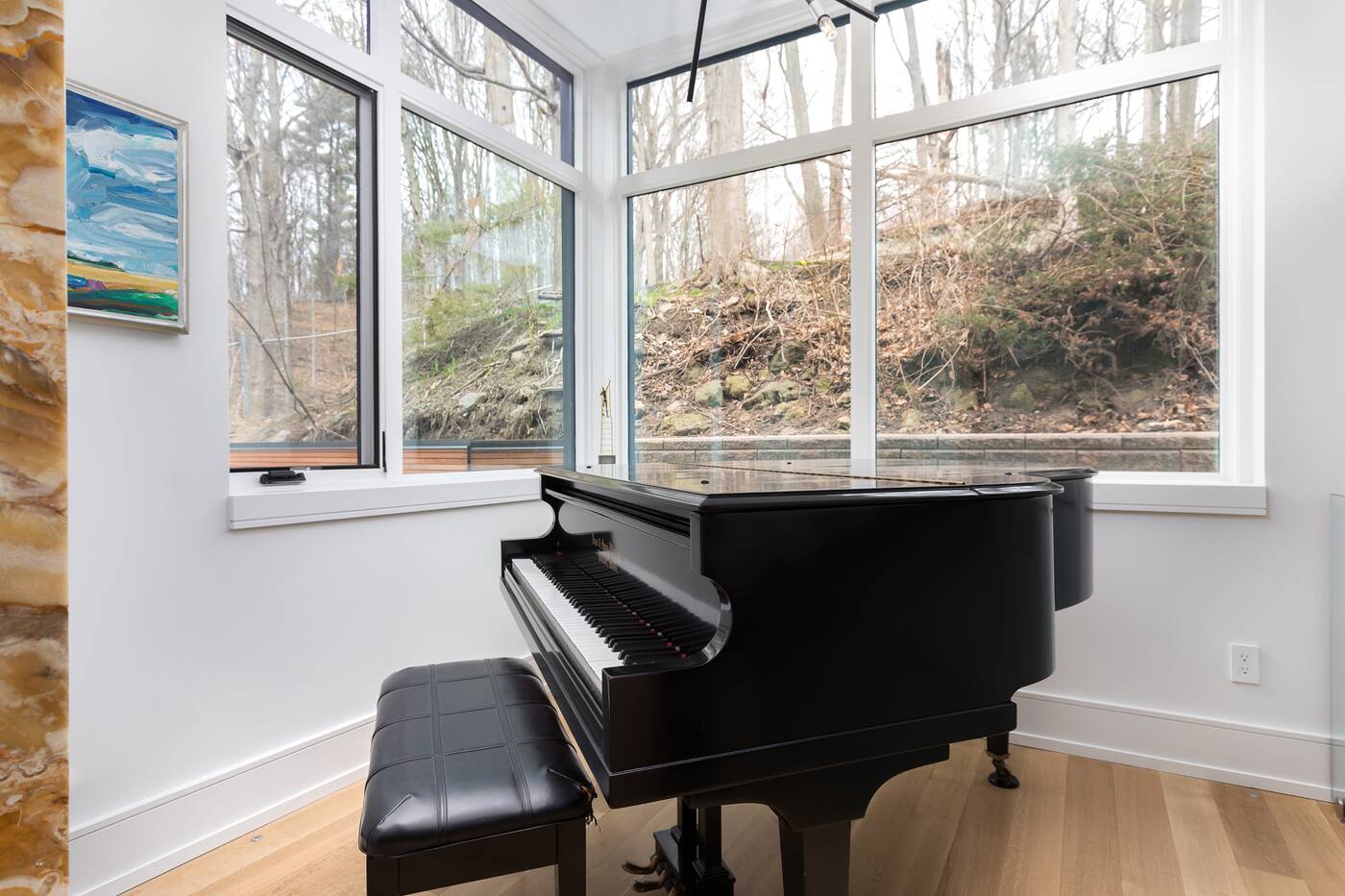 There is nature all around the home.

The home is on the Hinder Property, a secluded part of the Don Valley known for hiking and bird watching.

Goldstein wanted to bring the feeling of nature into the home, so for example, the entrance floor is blue — representing water. There are also floor-to-ceiling windows. 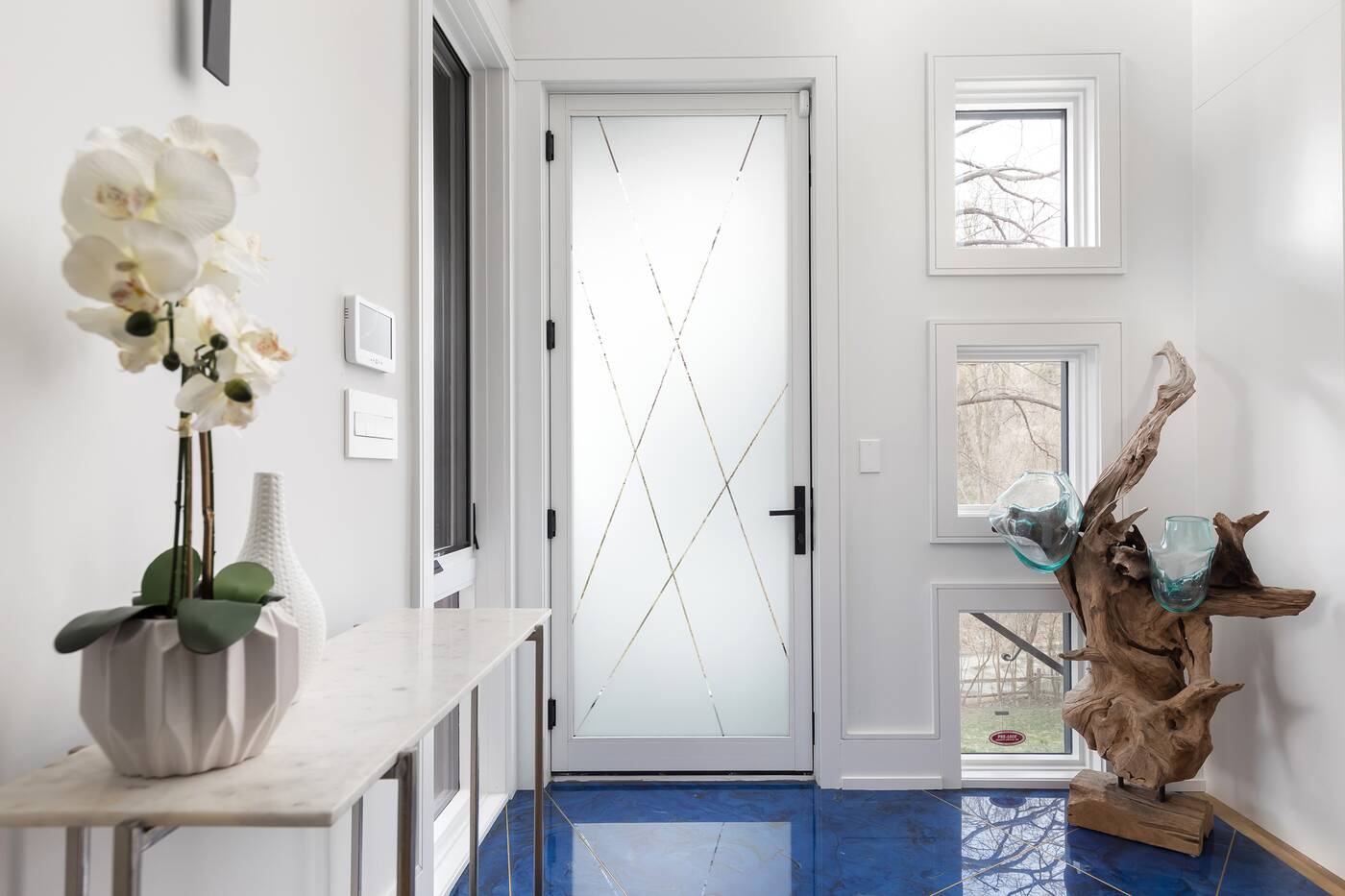 The bright blue floor at the entrance symbolizes water.

"You really are being embraced by nature," she said.

The kitchen is modern with a centre island. 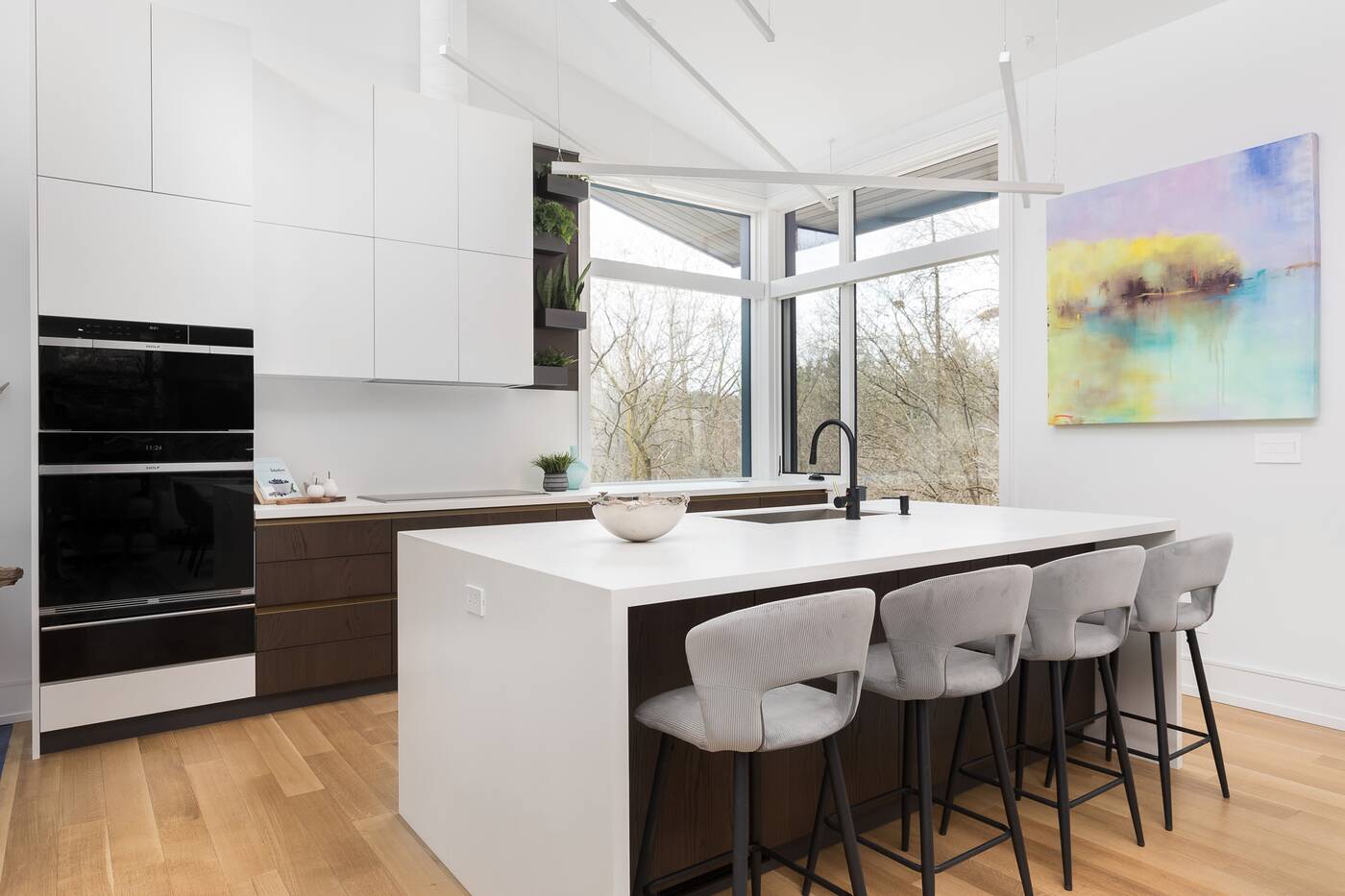 The kitchen is modular and not at all woodsy.

The dining room and living room are open-concept. 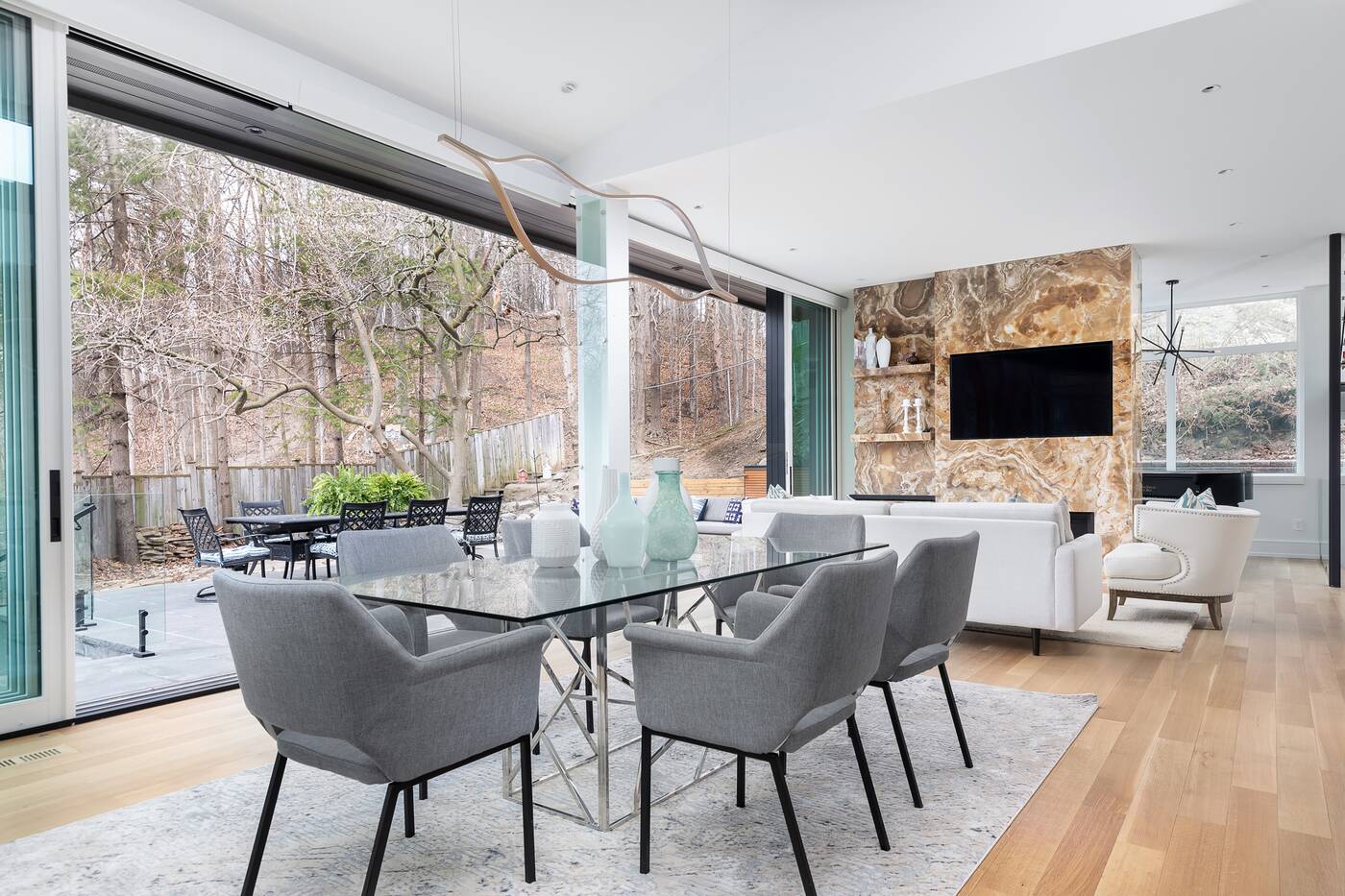 The kitchen, dining room and living room are open to each other and the great outdoors.

In the living room, there is an onyx entertainment wall. 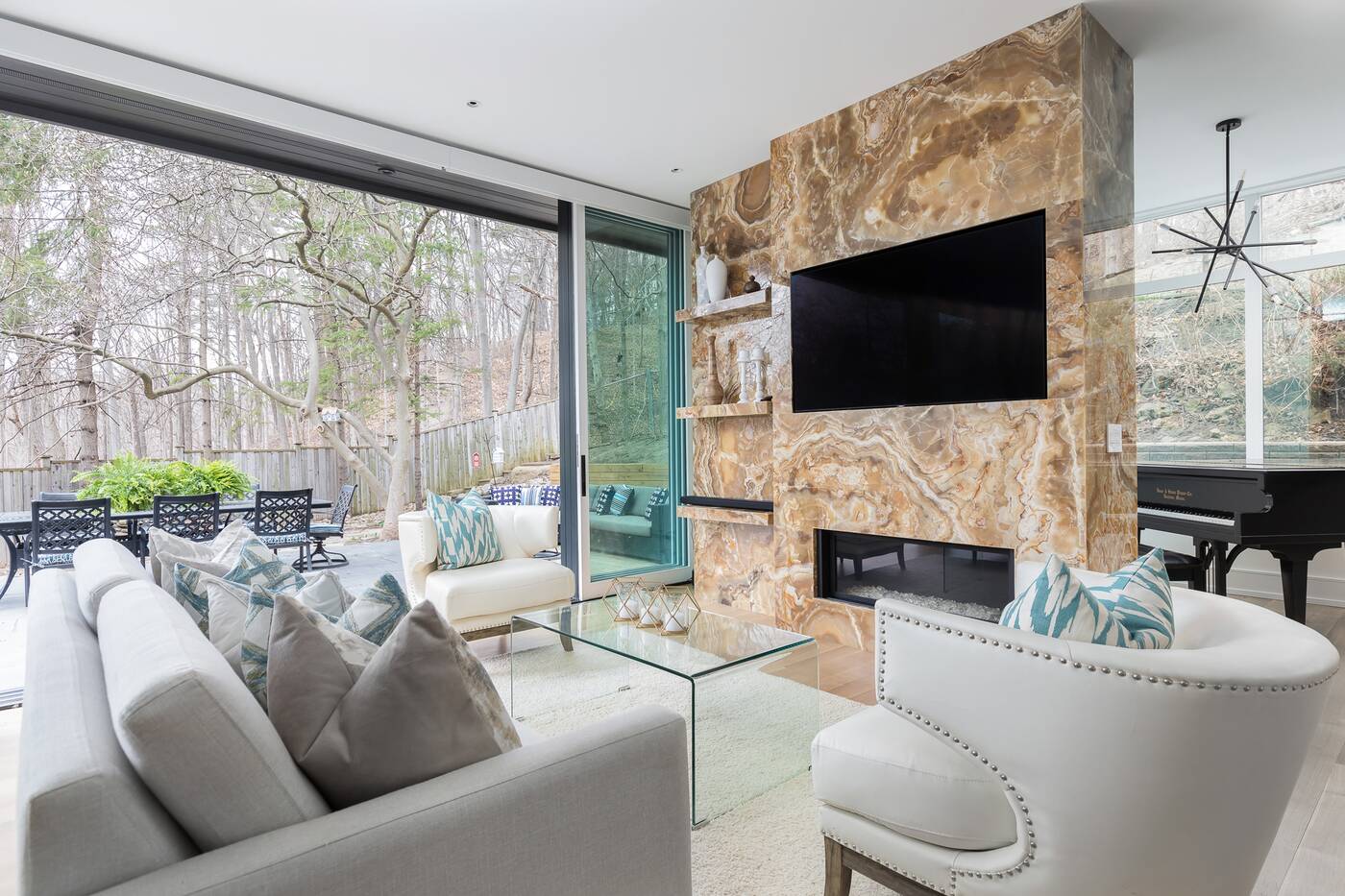 The living room brings geology inside with a big rock wall.

The home comes with a sauna and there is a suite in the basement. 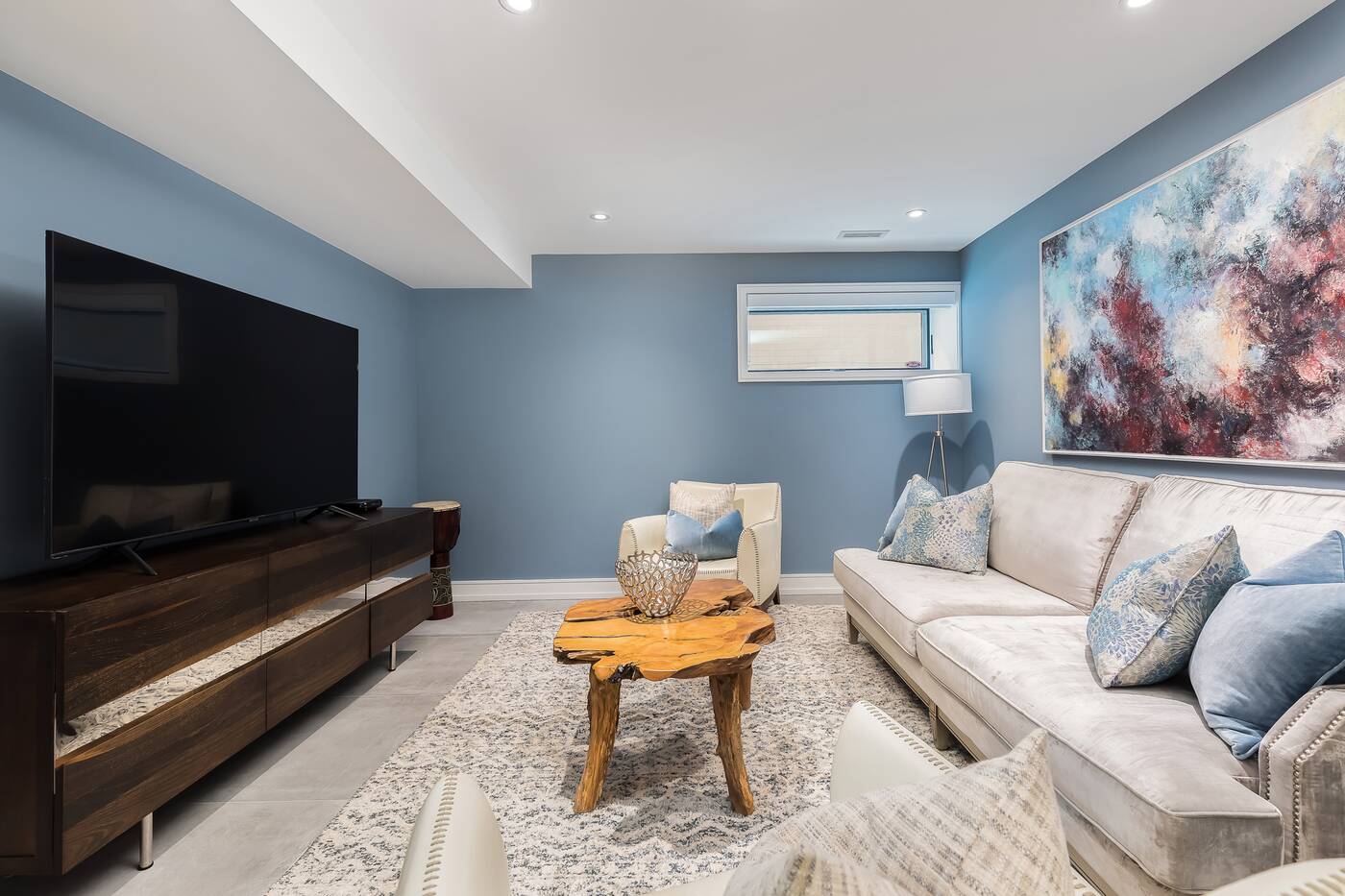 There is another living space in the basement.

The driveway is heated with space for four cars. There is also a Tesla charging station (Tesla not included). 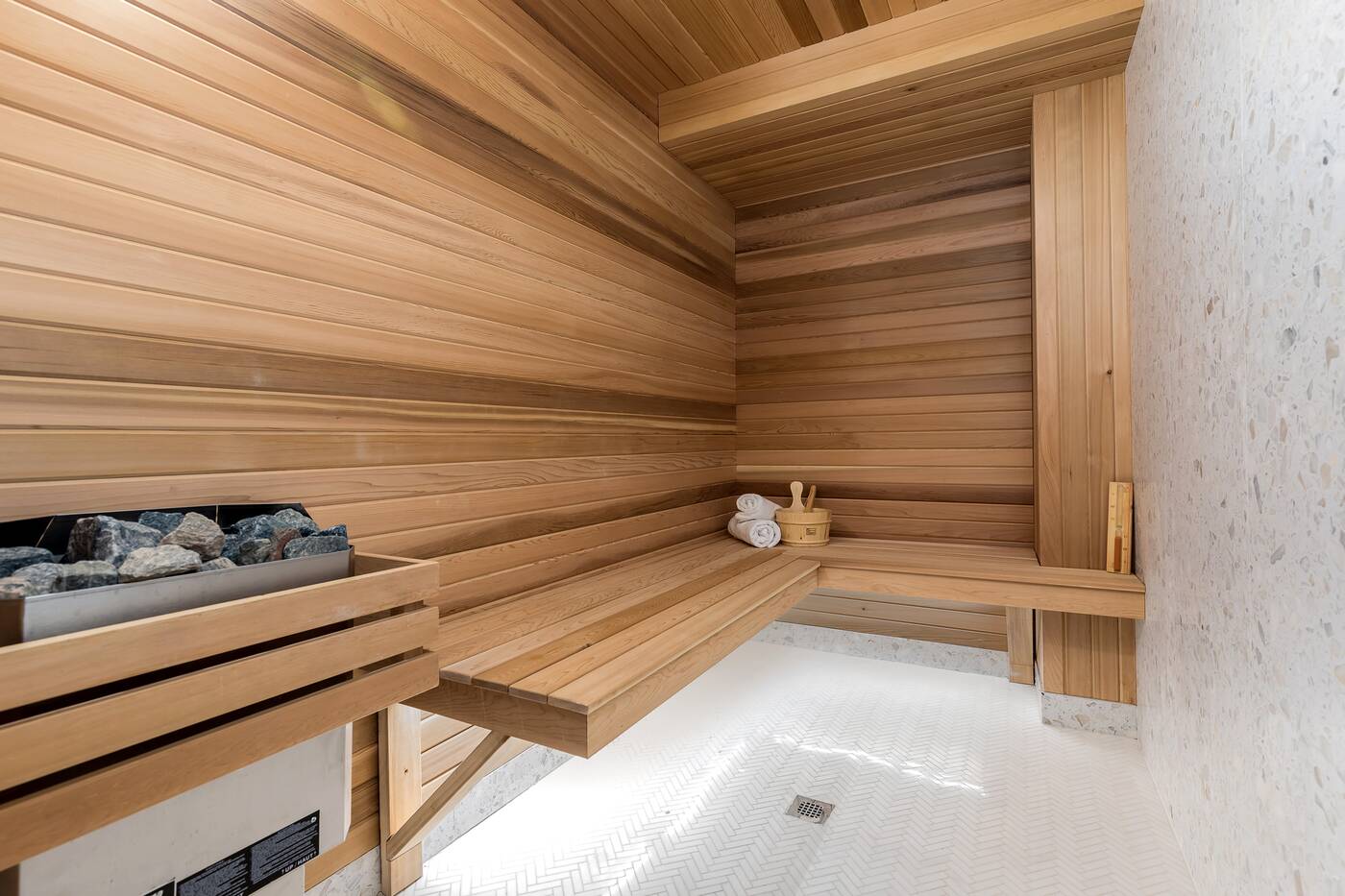 The home also has a sauna.

Whoever buys the property should also know that the home is blessed. Goldstein threw 18 pennies into the foundation as it was built.

"Eighteen, for Jewish people, is for good luck and prosperity," she says. She also wrote blessings on the walls and doorways as they were being built. 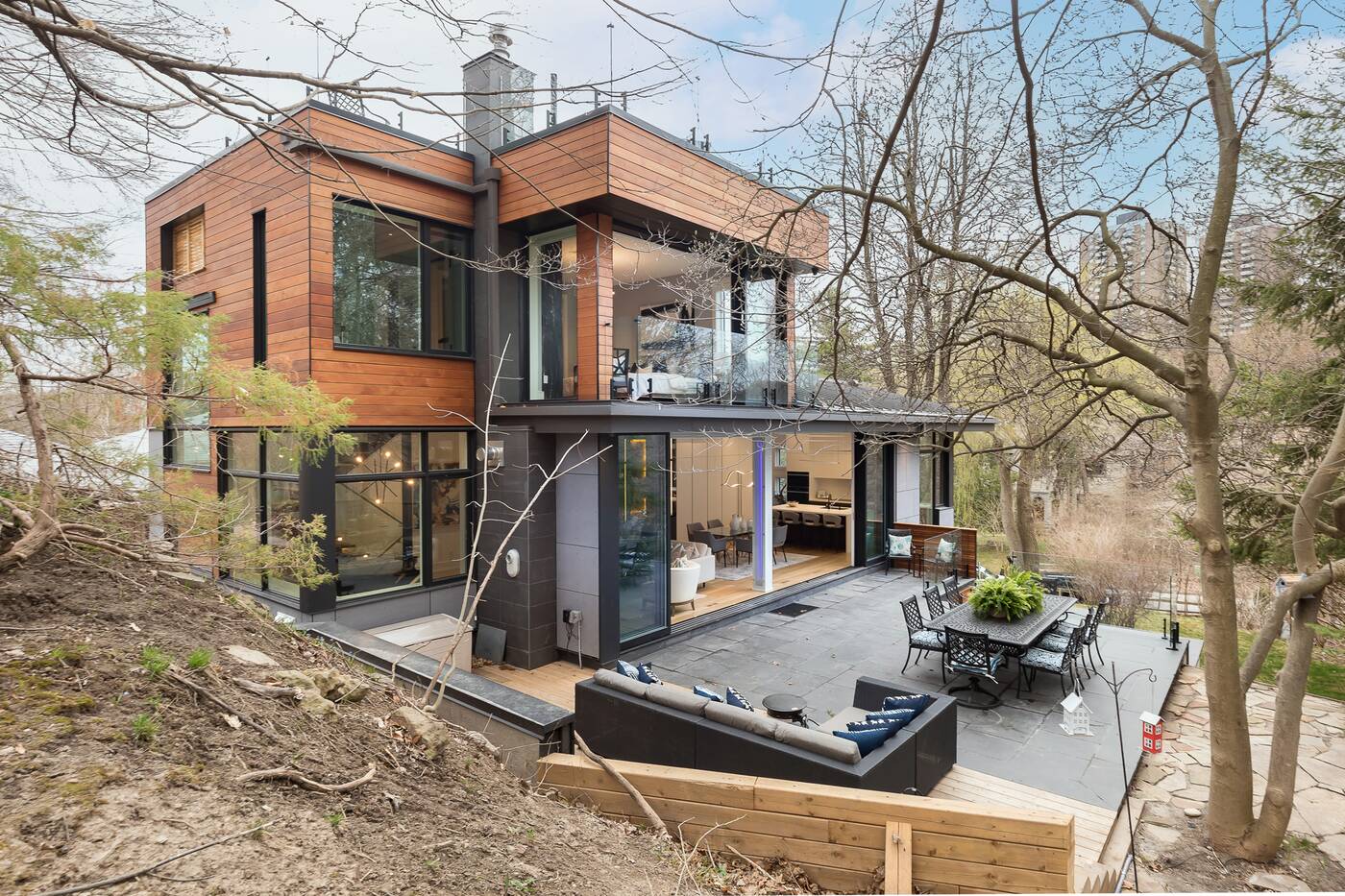 The home is surrounded by trees with just a hint of the city in the distance.

"The whole house really has a beautiful energy," she says.