After more than eight years of back and forth, up and down, all around 'will-they-wont-they' wishy-washery, the team behind Toronto's forthcoming Mirvish + Gehry towers have released new plans for what is expected to be one of the city's most exciting developments in decades.

The pair of planned skyscrapers on King Street West are truly stunning, even if only for their size: At 308 metres and 266.5 metres tall, they'll be two of the tallest buildings in Toronto upon their completion.

They'll also be two of the most unusual-looking, for better or for worse, depending on who you ask (better, if you ask me.) 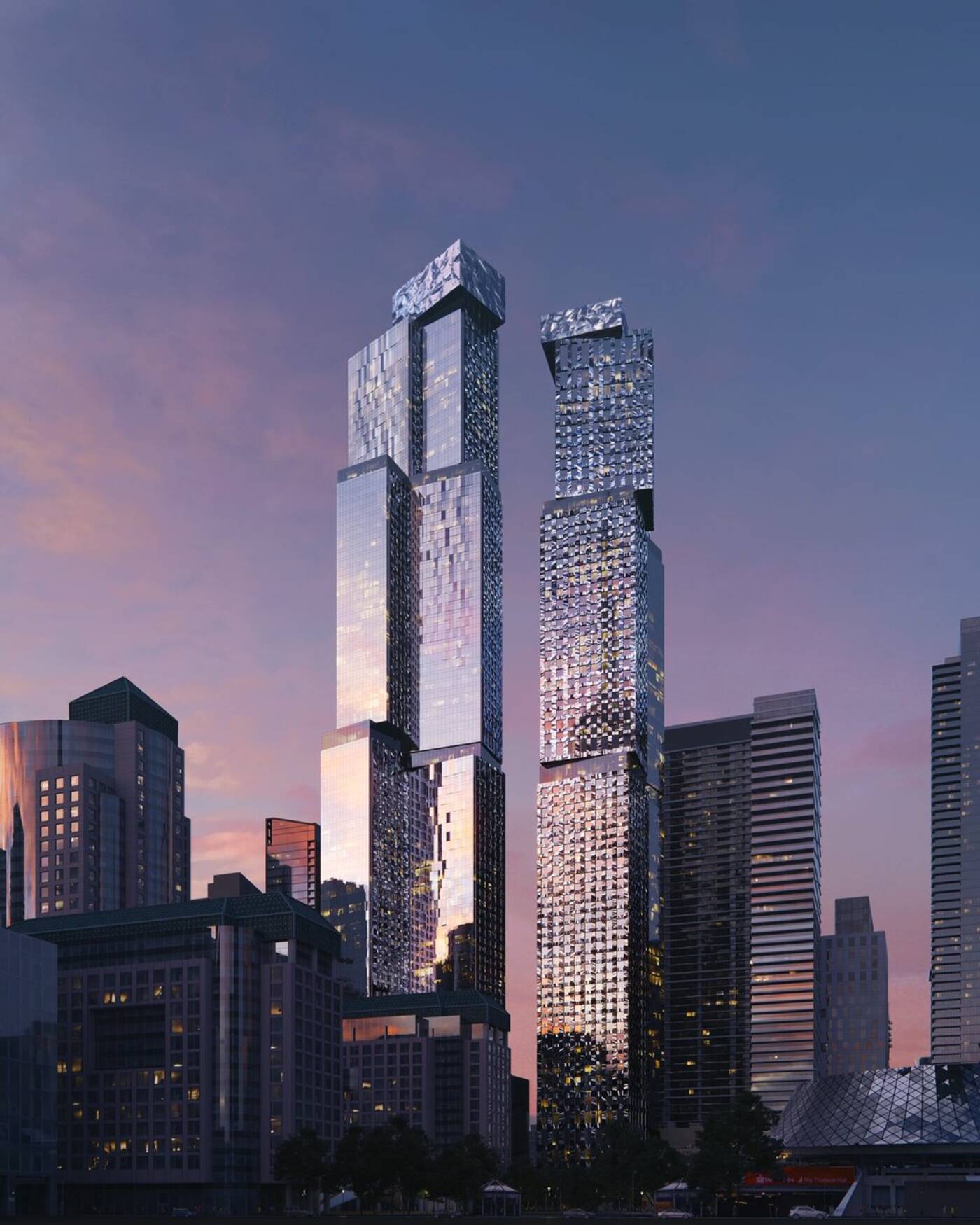 The Frank Gehry-designed condo, commercial and retail towers will eventually stand in the heart of Toronto's Entertainment District. Rendering by SORA, courtesy of Gehry partners.

The latest design updates for the mixed-use buildings at 260 King St. W. show structures far blockier than the curvy three-tower complex Gehry initially proposed back in 2012.

It also appears more cohesive (and less cheese-gratery) in the new renderings than it did in some earlier revisions, with vertical columns of blue glass and textured steel comprising each building.

"Each tower is still made of asymmetrically stacked boxes, which cantilever out in different directions. They're a bit more regular now, but still a complementary pair," notes Globe and Mail architecture critic Alex Bozikovic of the new design. 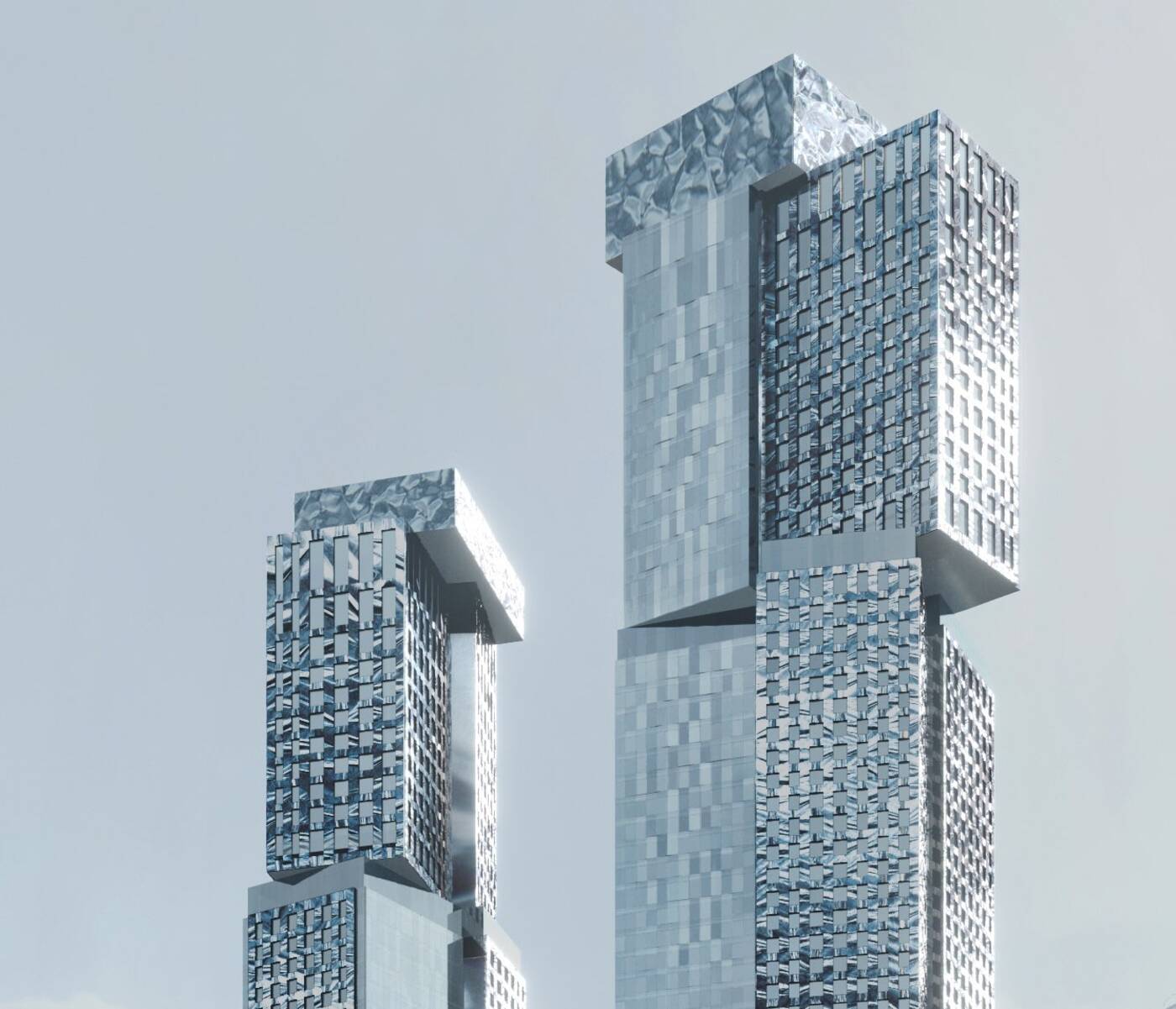 Selected panels of glass on the west tower will tilt outward by as much as one metre to catch light at different angles, according to Bozikovic. Rendering by SORA, courtesy of Gehry partners.

Gehry himself was present (via Zoom) at a City of Toronto meeting on Tuesday to discuss the project, no doubt thrilling fans and admirers of the great Canadian-born architect.

"With this project, I wanted to create an ensemble of buildings that were respectful to the city and referential to the Toronto that I once knew," said 92-year-old Gehry during the presentation.

"The detailing of the exterior is intended to give the buildings a human scale and hopefully reflect the light and color from the city and the sky around it." 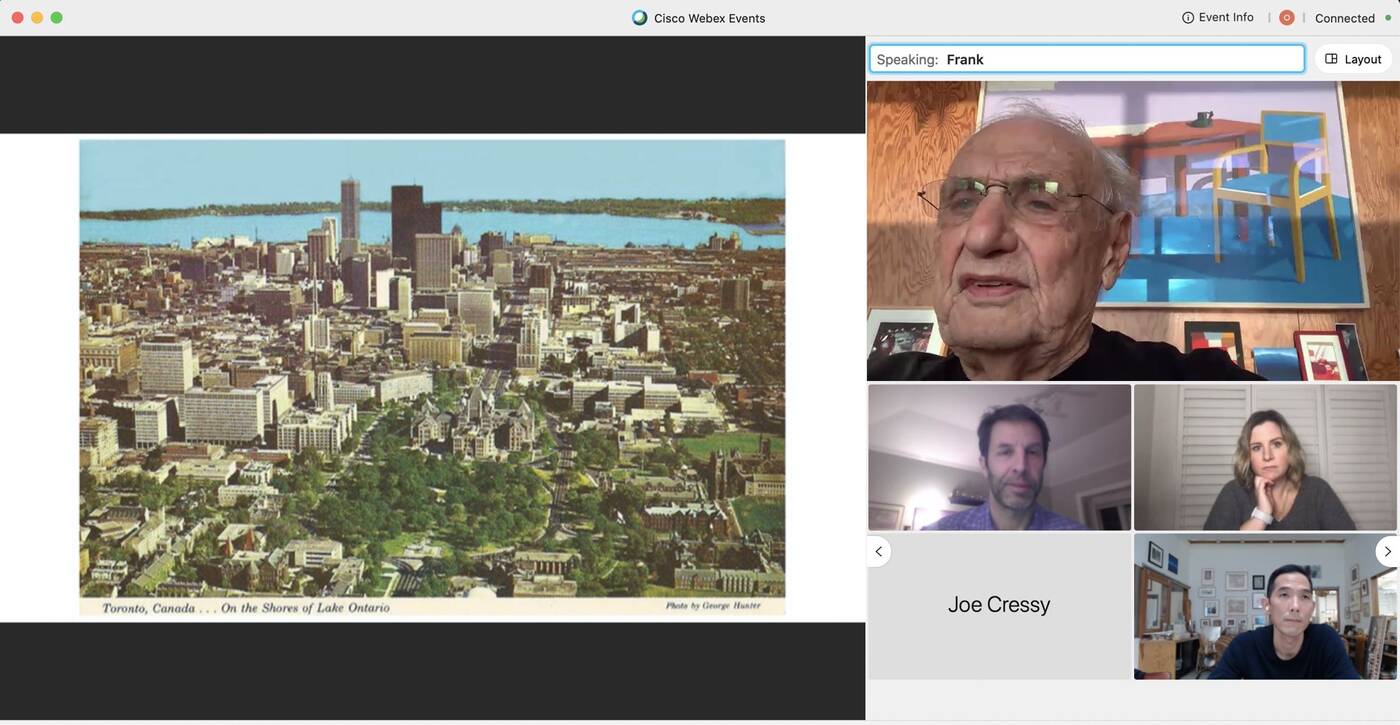 The legendy Frank Gehry spoke to stakeholders in a meeting hosted by the City of Toronto on Tuesday from his home in California. Image via Bousfields Inc.

Sitting atop the site that now holds Mirvish's Princess of Wales theatre, these will be the tallest and biggest buildings designed by Gehry to date. Some say they may also be his last, given his advanced age.

Regardless, the towers will be a huge deal upon completion, transforming Toronto's skyline and serving as a visual tribute to the architect for decades to come.

"I wanted the two towers to each have their own personality, but I also wanted them to talk to each other, creating a dynamic and changing addition to the skyline depending where you were viewing them from in the city," said Gehry. 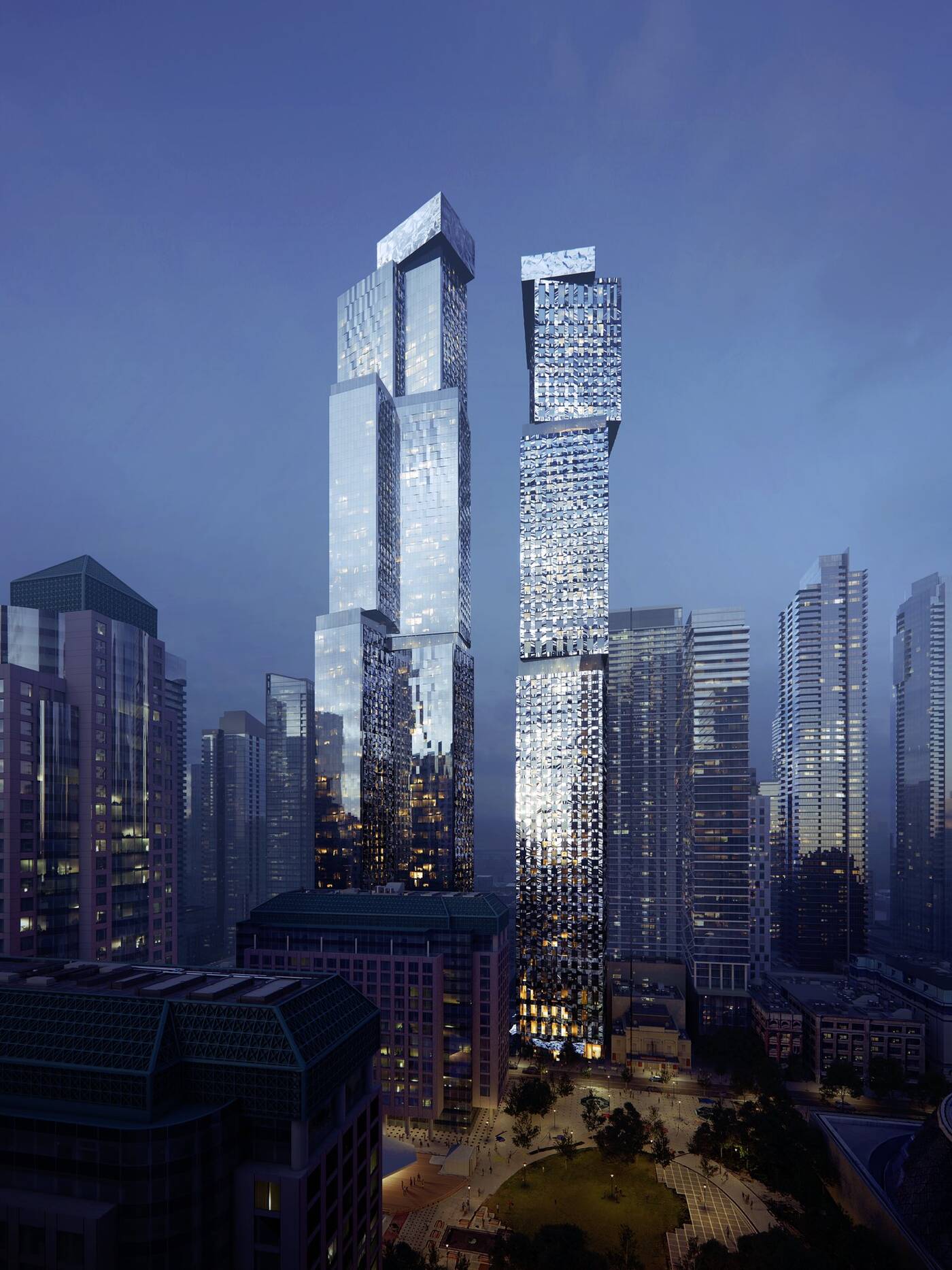 The show-stopping towers will transform Toronto's skyline as two of the city's tallest and most creatively-designed buildings. Rendering by SORA, courtesy of Gehry partners.

If all of the new changes are approved by the city and the project moves forward as is, the two towers will contain some 2,087 condo suites between them, as well as new facilities for OCAD University, plus plenty of retail and potentially hotel or office space.

Developers Great Gulf, Westdale Properties and Dream Unlimited plan to begin selling condo apartments in the complex as early as 2022, according to Design Boom.

"This project represents a coming home for Frank Gehry to the city he loves and will be one of his most significant architectural achievements," said Westdale's Mitchell Cohen, as cited by the British industrial design magazine.

"He is the heart and soul of the project and it has been an honor working with him and his team. We're excited to be progressing in our goal to execute Frank's vision for the development of such an important site in downtown toronto."