It was just over one year ago when music mogul Pharrell Williams appeared on huge screens all around Yonge-Dundas Square with a message for the people of Toronto.

Paraphrased, that message was: "I'm the face of a new condo development at Yonge and Eglinton."

The master beat-maker is said to be working with Toronto-based architects at IBI Group and interior experts at U31 to design the complex — titled "Untitled" — for developers Reserve Properties and Westdale Properties.

Slated for occupancy in 2023, the condos at 110 Broadway Avenue are nowhere near complete, but the involvement of a 13-time Grammy Award winner has already sparked an appetite for details among prospective buyers (and Neptunes fans.)

Fortunately for them (and us), developers haven't been shy about keeping the public up to date.

Earlier this week, Westdale and Reserve released new marketing materials for their "curated condominiums at Yonge and Eglinton, in collaboration with Pharrell Williams."

The latest video is about as cheesy as any other condo promo video, albeit with a better soundtrack, but it did bring to our attention some additional features that residents of the two-tower, roughly 750-unit complex can expect.

I'm not quite sure what this is supposed to be (I think it's an onsite daycare?) but hot damn if that isn't one gorgeous looking space: 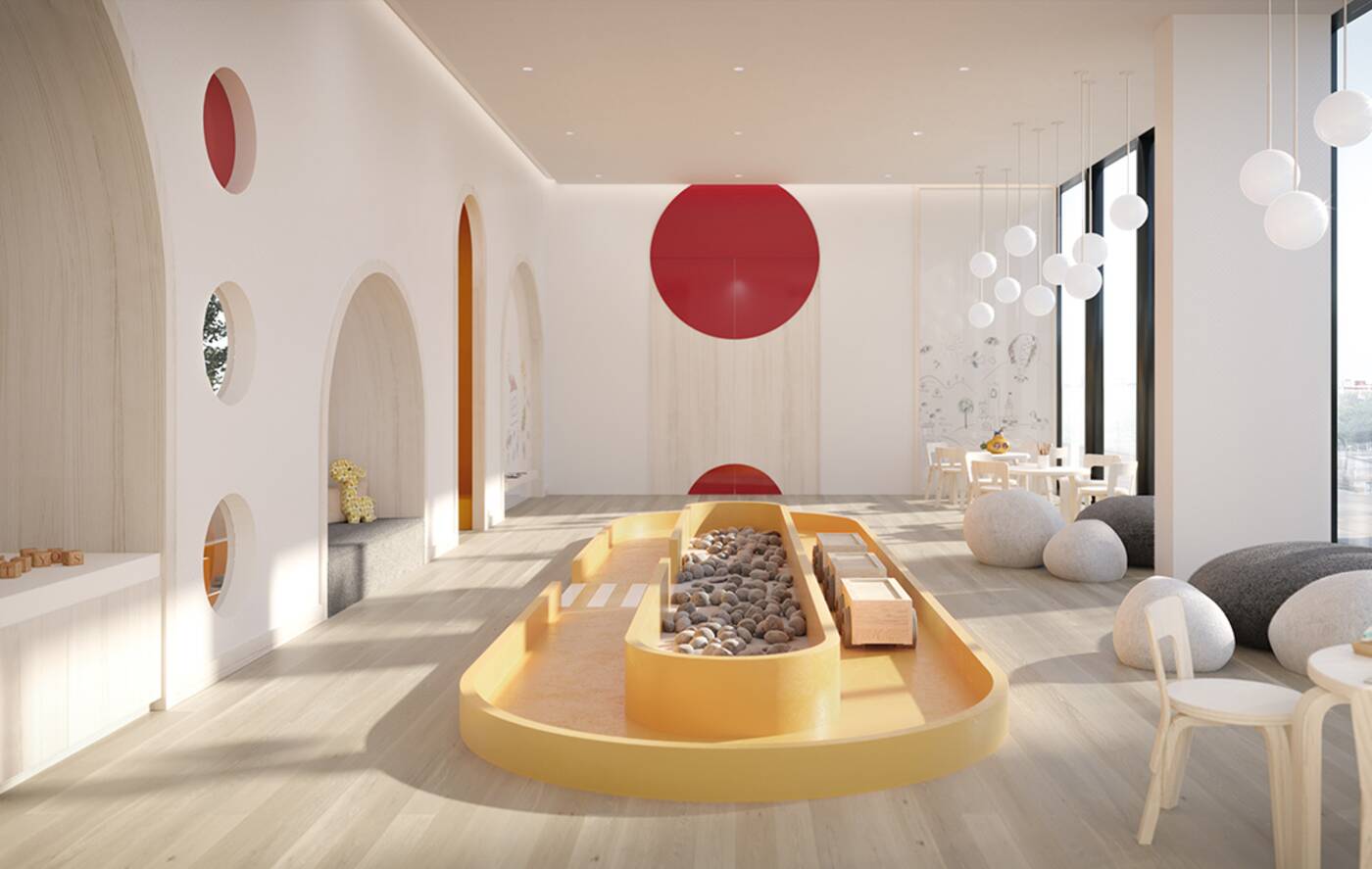 Pharrell's new condo building in Toronto will include this amenity space with a wooden choo-choo track and zen rock garden. Image via Untitled Toronto.

We already knew that this project was focusing heavily on amenity spaces, of which it will reportedly have a whopping 30,000 square feet.

Renderings released last fall revealed not only unique building exteriors inspired by sound waves, but several communal spaces meant to "an exploration of the interplay between nature, essentialism and Japanese inspired minimalism using a palette of plants, water, light and form."

At the time, designers promised that a podium made of natural stone would anchor the towers, punctuated by a courtyard featuring Japanese maple trees growing out of slate. 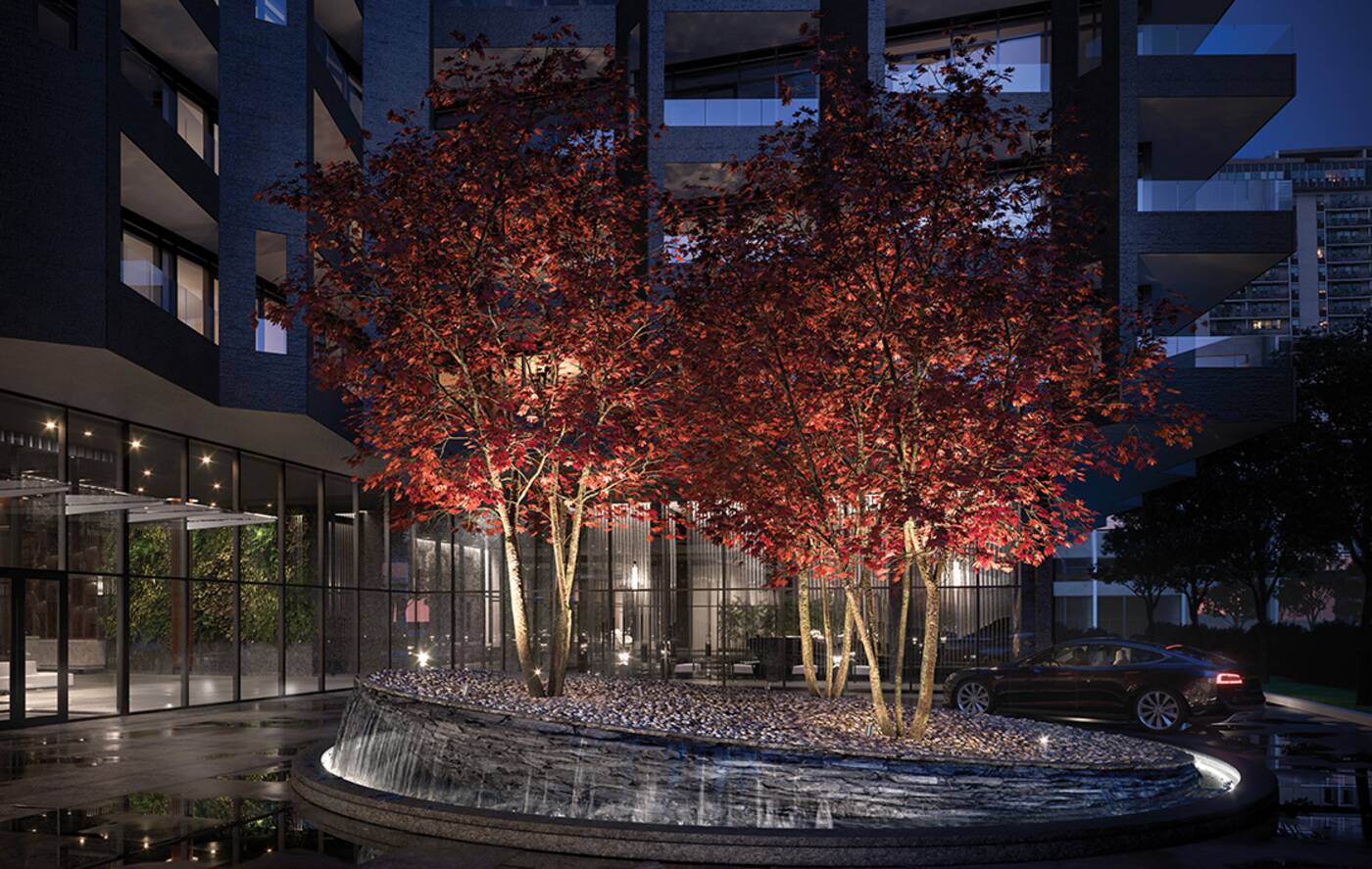 Rendering of a courtyard outside the forthcoming condo complex by Pharrell Williams near Yonge and Eglinton. Image via Untitled Toronto. 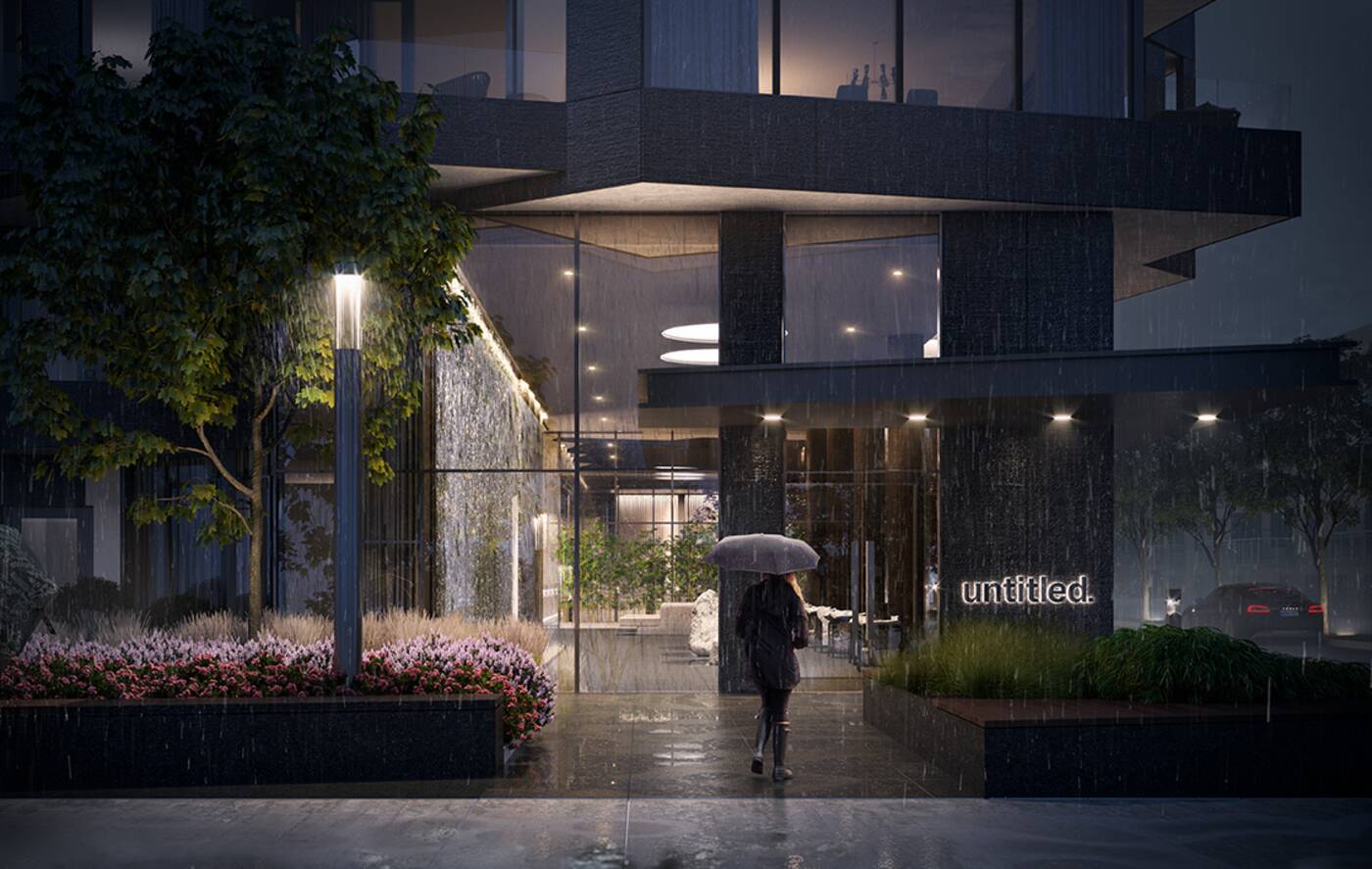 Pharrell has said that his team's goal with Untitled is to create a space that serves as a backdrop to each individual's life experience, "rather than projecting a lifestyle onto the residents." Image via Untitled Toronto.

It wasn't until recently, however, that we got a first look of a sprawling indoor recreation space with its own grand piano, shuffleboard and table tennis. 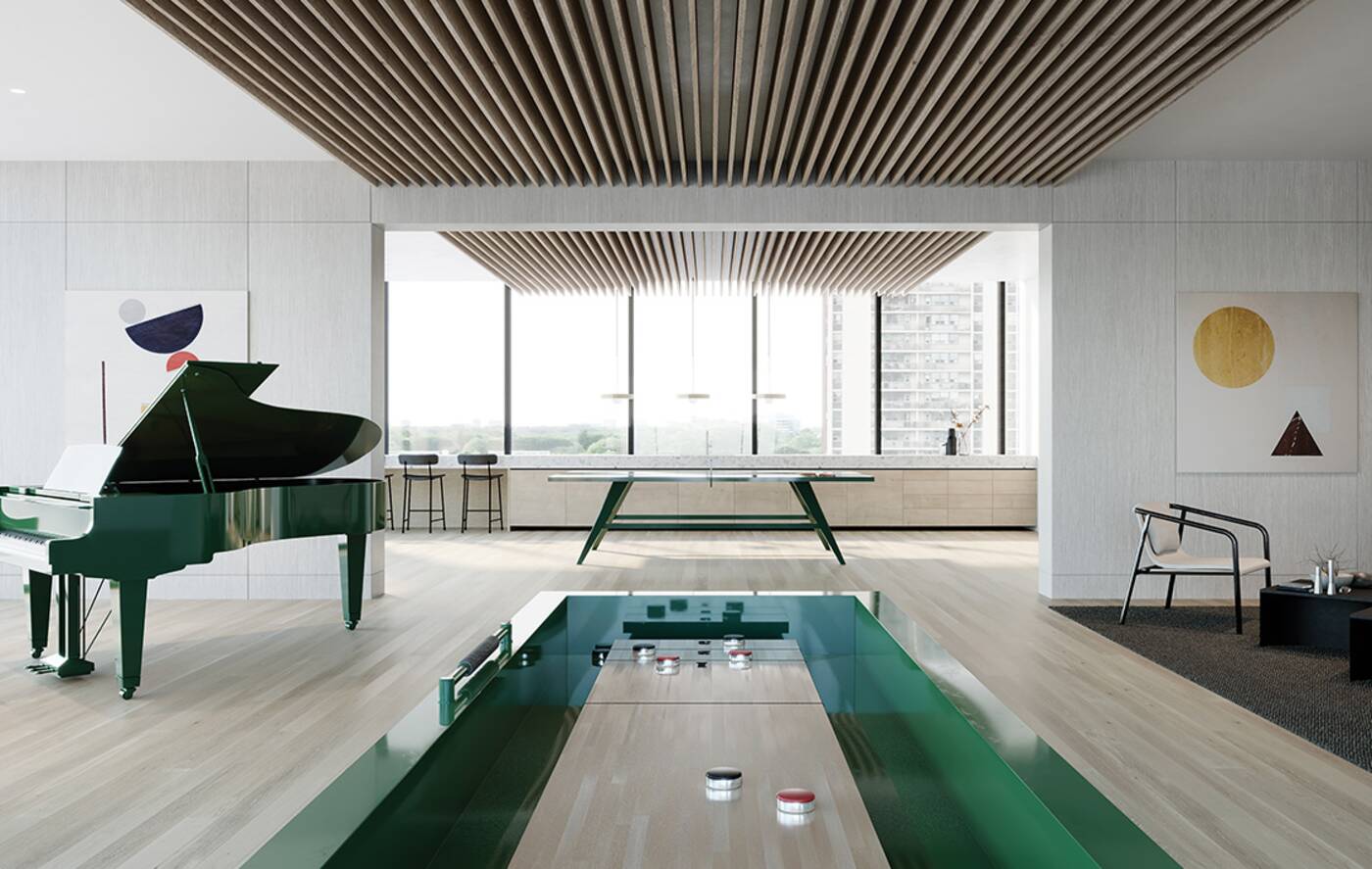 Amenities aplenty will be available to guests and residents at the new Unitled complex once it's finished in 2023. Image via Untitled Toronto.

... As well as layout plans for the space showing where the team wants to build everything from a co-working garden and reflection lounge to an indoor-outdoor pool and "oasis gallery," whatever that means. 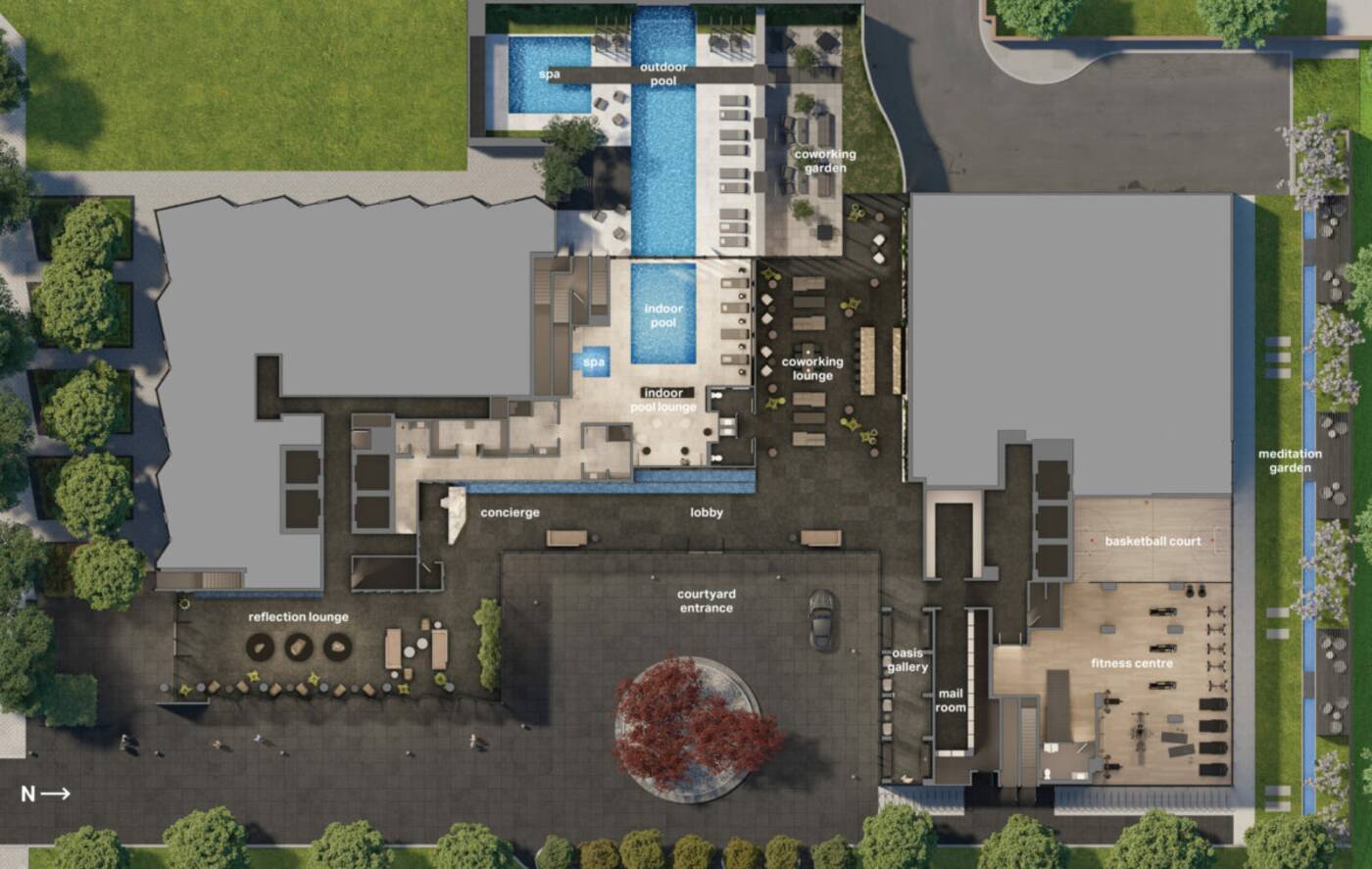 Designers have planned for multiple floors of indoor and outdoor amenity space, with a central 30-foot-tall waterfall providing a backdrop for both pool and lobby space. Image via Untitled Toronto.

Coolest of all, in my humble opinion, is a personal basketball court splashed with millennial pink. High ceilings, full sunlight, tree views, minimalism: This looks like the kind of place that could shift a mood real quick. 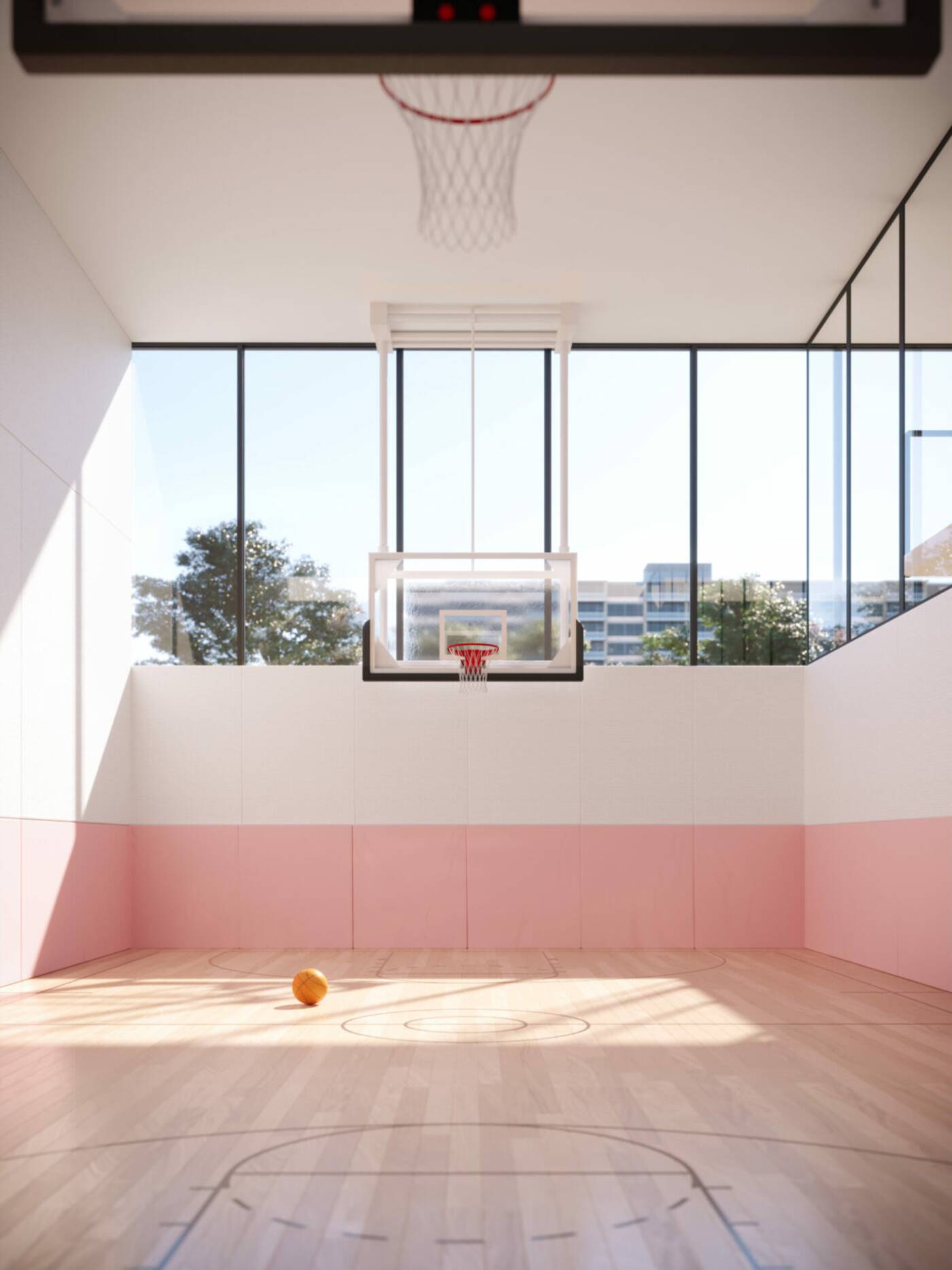 Nothing like a good game of HORSE in a millennial-pink room to turn that frown upside down. Image via Untitled Toronto.

Eat your heart out Drake, am I right?

Okay, so it's not a personal basketball court, but few condo buildings can boast this feature — and the ones that can are usually on the less-glamourous side.

Keeping in mind that these are only renderings, and that the complex is still in pre-construction mode, you can register to purchase one on Untitled's website.

Prices are said to start in the low $400,000's, but will almost certainly range up into seven figures for larger units.

A massive investment for something that isn't even built yet, but if Pharrell — the man who brought the world such iconic hits as Nelly's "Hot in Herre" and Jay-Z's "I Just Wanna Love U" — is involved, it's bound to be a good one.