The untitled buildings are real and, by the looks of it, will be pretty slick when finished. 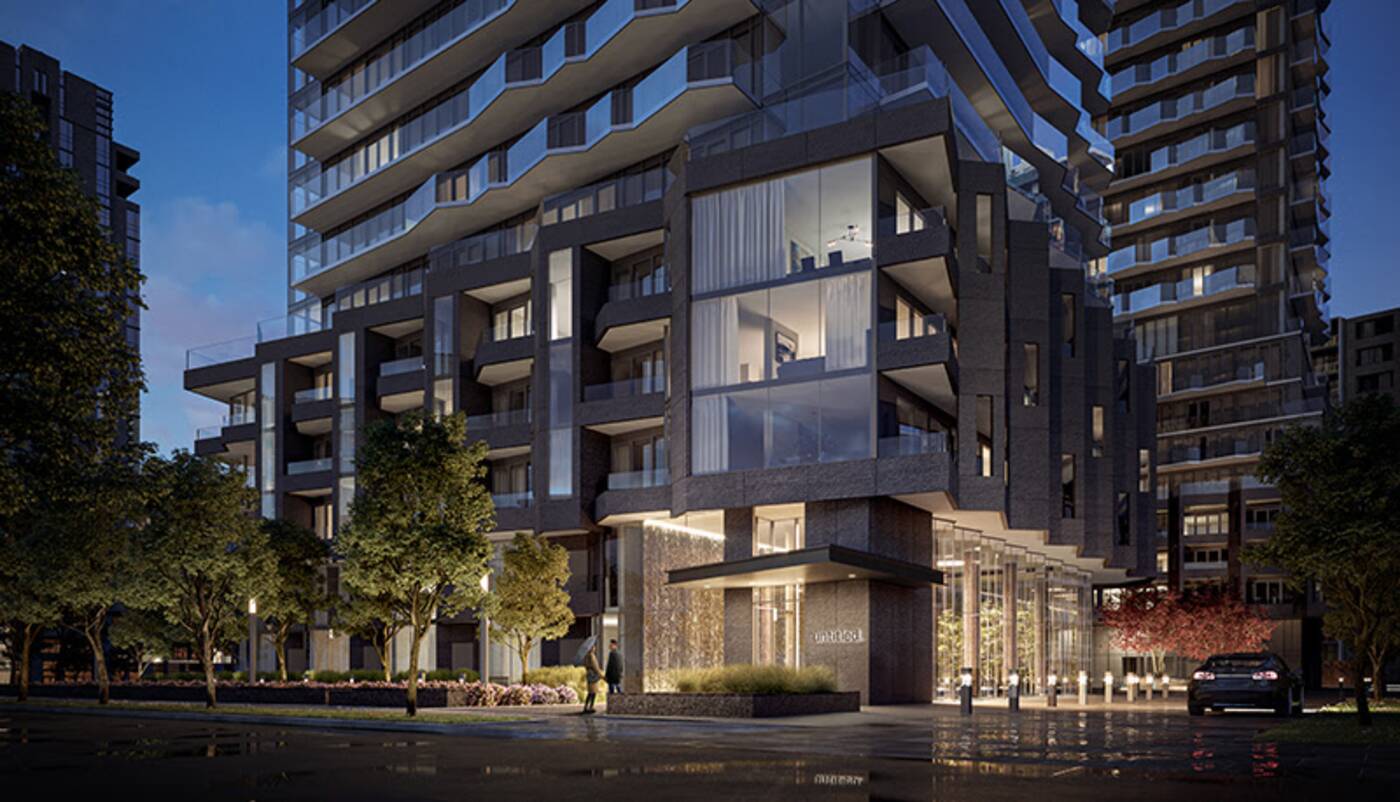 An exterior rendering of the Pharrell Williams-designed condo complex planned for in Toronto. Image via Norm Li/Westdale Properties/Reserve Properties.

Working with architects from Toronto's IBI Group and the interior design firm U31, Reserve and Westdale have come up with what they call "a collective vision for the project" based on Williams' 2014 song "Gust of Wind."

The two-tower development is imagined as an articulation of the song's wave pattern — a "visual abstraction of music" created using parametric design.

"We arrived at the concept fairly early in the process and worked with Pharrell to select a song that really meant something to him and could help bring this idea to life," said IBI Group lead architect Mansoor Kazerouni in a press release issued Wednesday morning.

"There is a sophisticated, elemental feel to the building... Once we had the song, there was a lot of testing and iterating to find the right notes that would produce the most fluidity." 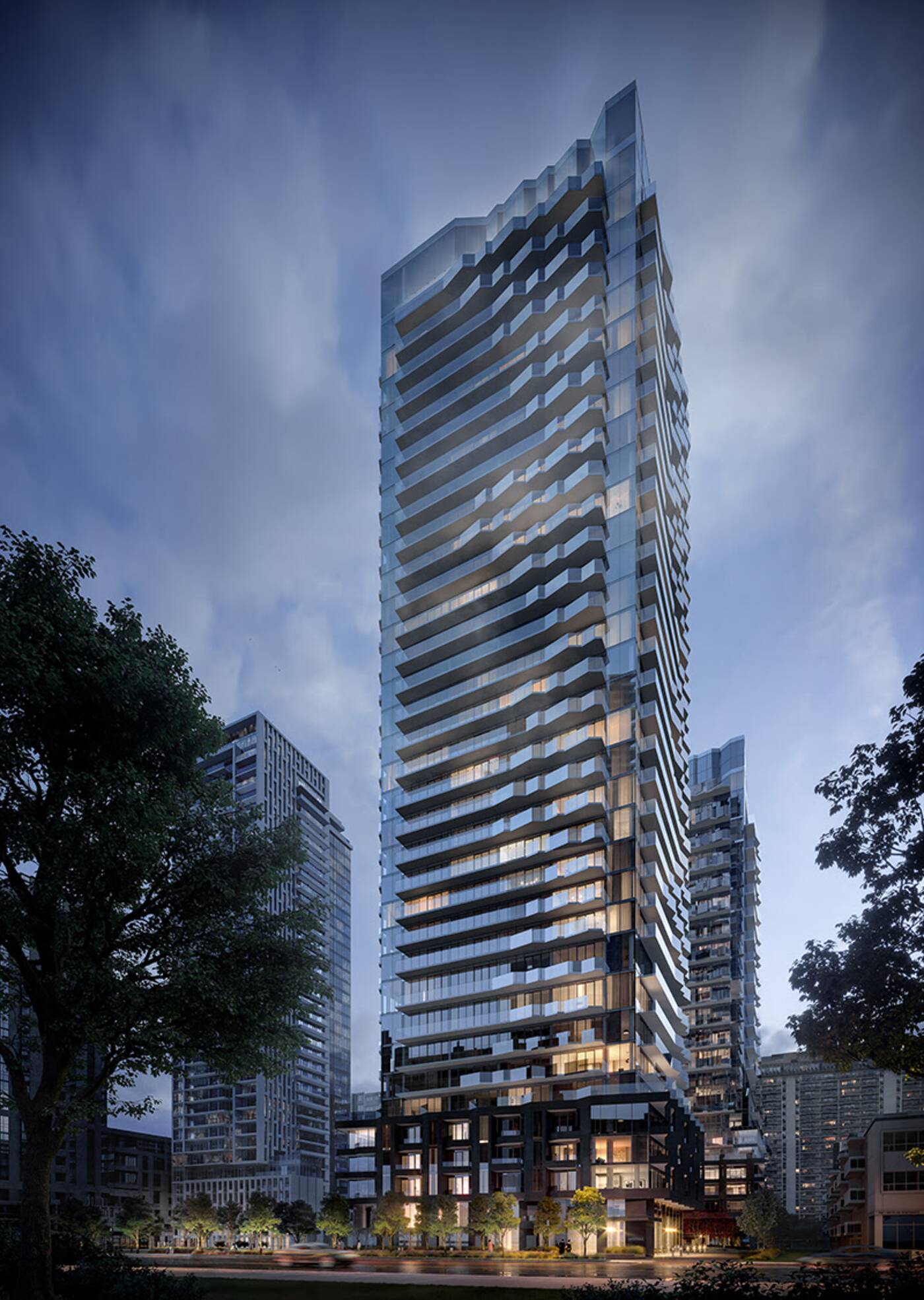 The planned set of condo towers will be located in Toronto's bustling Yonge and Eglinton neighbourhood. Image via Norm Li/Westdale Properties/Reserve Properties.

As revealed when the project was announced last month, the development will contain 751 condominium suites, a mix of studios, one-bedrooms, two-bedrooms and three-bedrooms.

New to the plan is a separate, 413-unit purpose-built rental building adjacent to the main untitled complex, as well as a new public park.

"The rental building will contain 200 affordable housing units, 165 mid-range units, and 49 market units, delivering a range of housing options," reads the release, nodding to concerns previously raised about the creation of a new luxury condo building in the midst of a housing crisis. 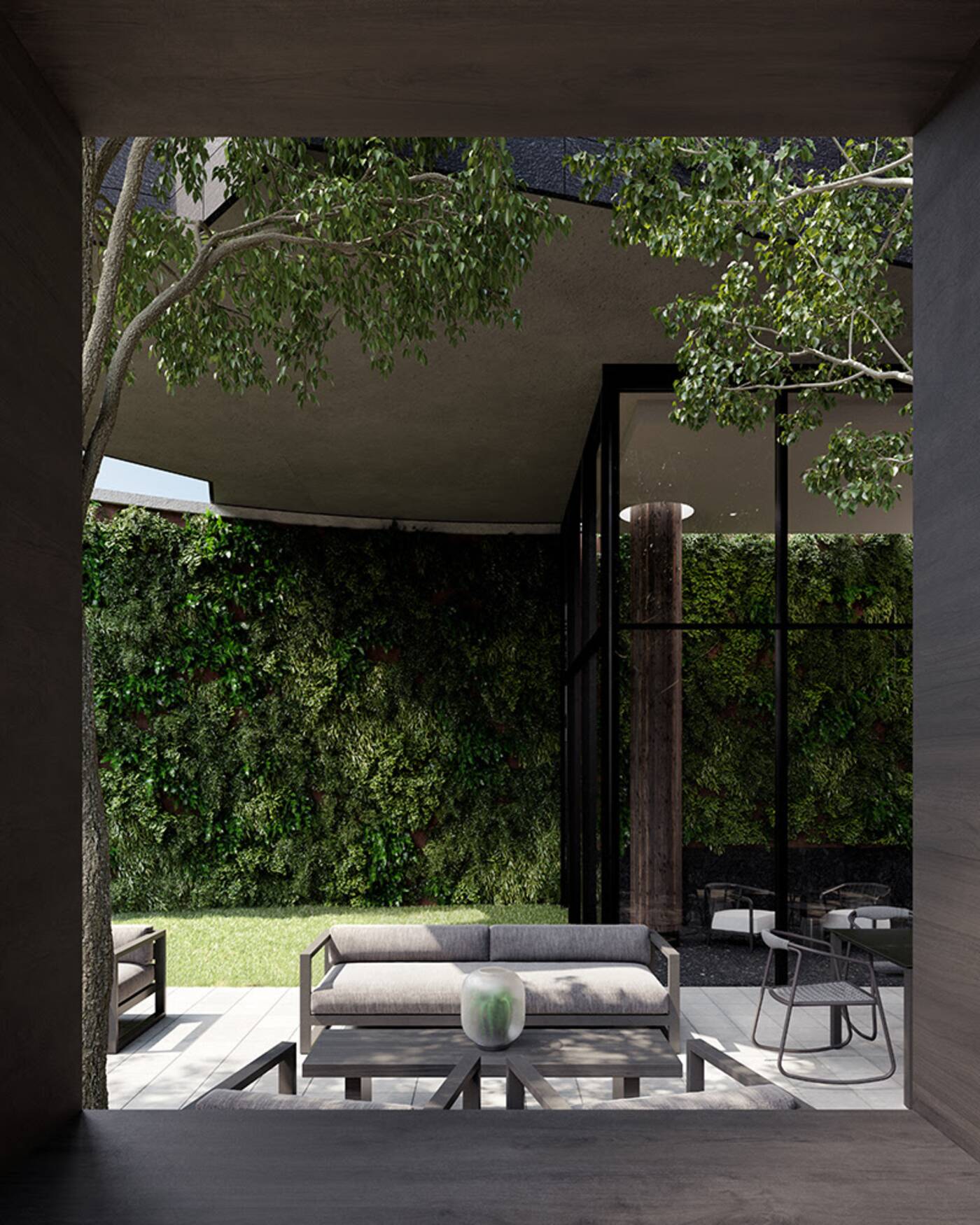 A podium made of natural stone will anchor the towers, punctuated by a courtyard featuring a Japanese maple tree growing out of slate.

Decidedly dark in terms of its palette with a heavy emphasis on natural materials, the lobby will be comprised almost entirely of "deep charcoal stone" with water features throughout.

The resulting spatial experience is described as "an exploration of the interplay between nature, essentialism and Japanese inspired minimalism using a palette of plants, water, light and form." 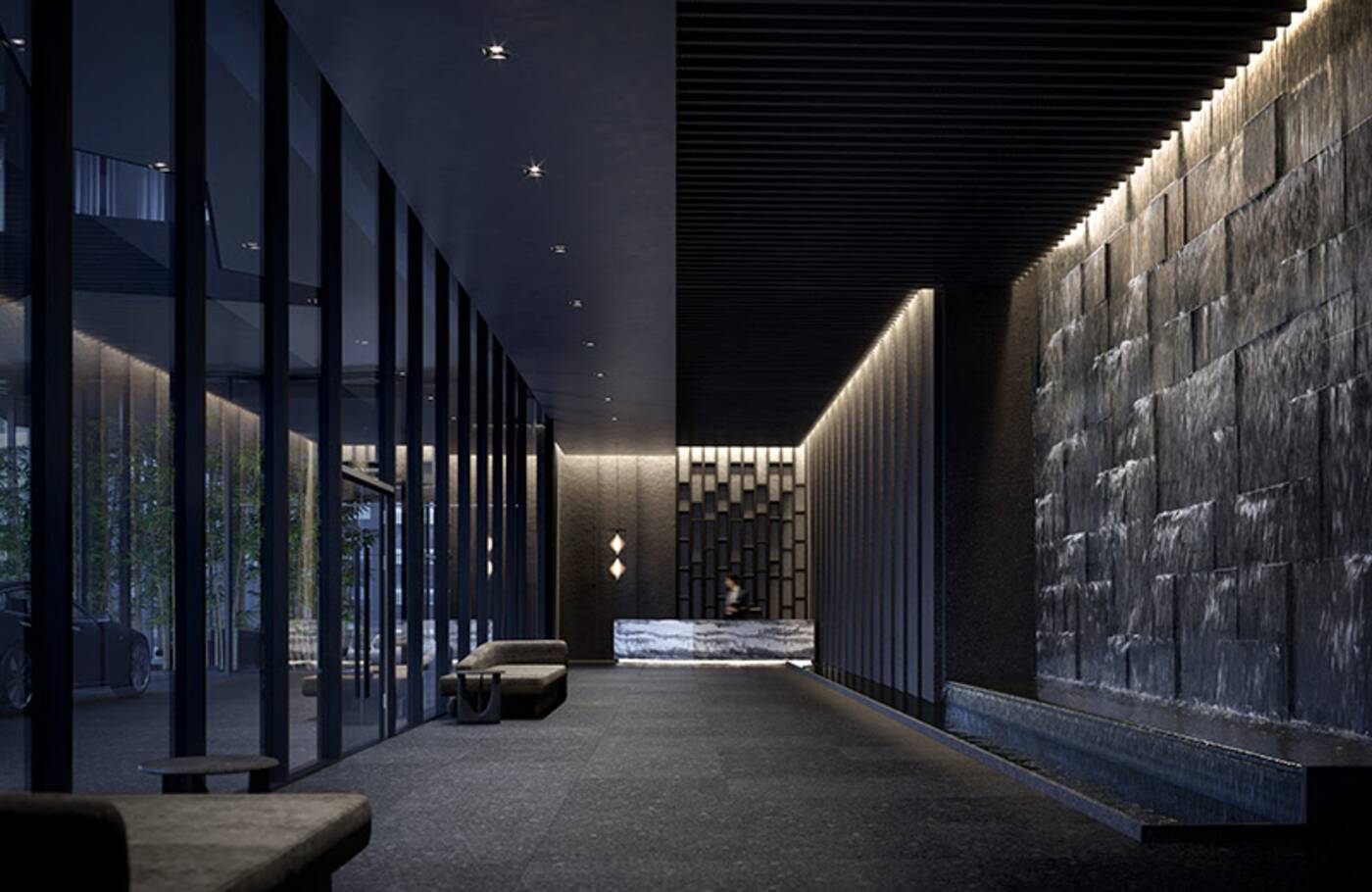 The goal, as stated previously, was to create a space that serves as a backdrop to each individual's life experience, "rather than projecting a lifestyle onto the residents."

"A cascading water feature adds movement to one's journey, extending through the arrival hall to the concierge," write Reserve and Westdale of the building's entrance.

"The flow of water that welcomes residents is purposefully intended to evoke feelings of energy and movement when you first step into the building; an experience that is continued as a memory in surrounding spaces."

Some 32,000 square feet of space within the building will be dedicated to "an extensive amenity program" across multiple levels, both indoors and outdoors. 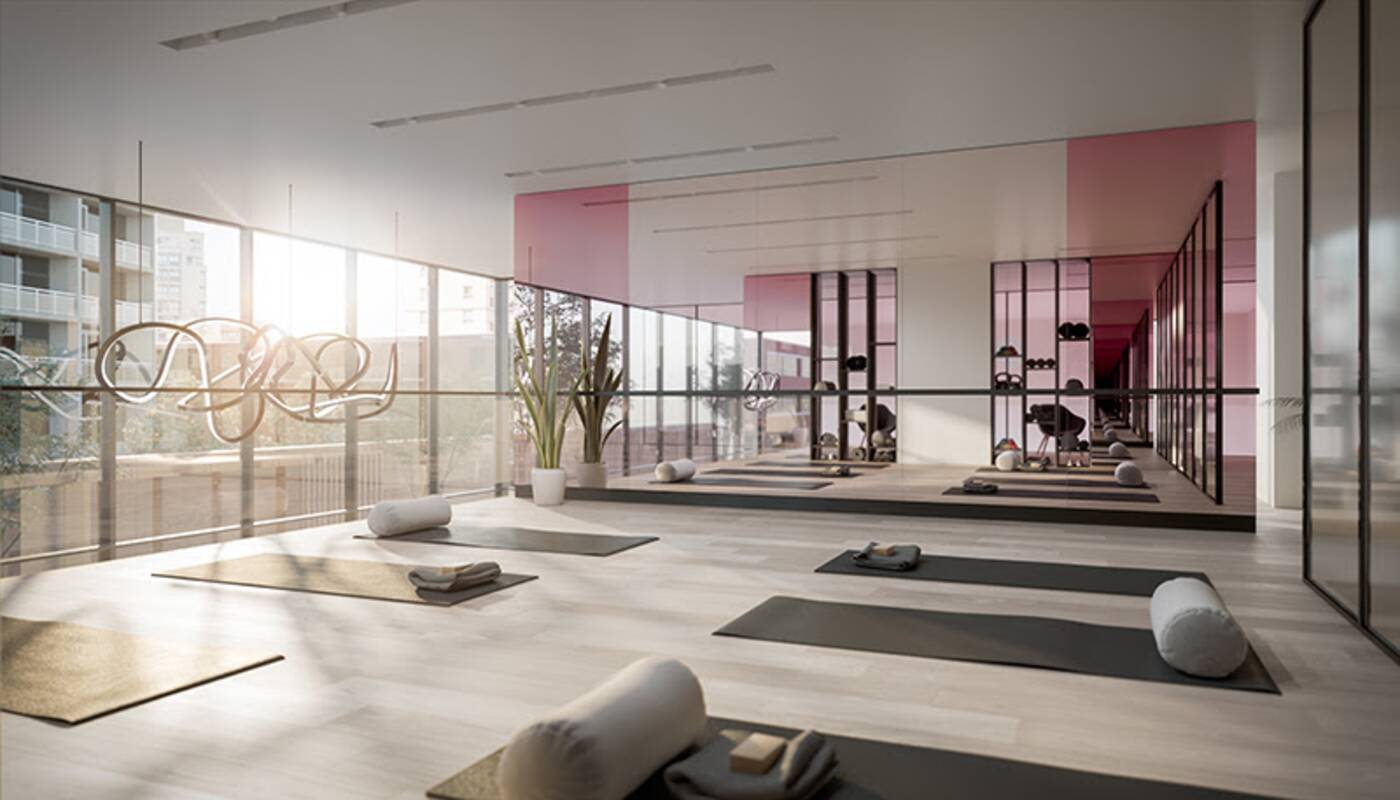 Amenities revealed to date include a co-working garden lounge, a screening room, an active fitness centre, a kids club, a rec room, a social lounge and a private dining room with a sake tasting area.

The complex will also have its own wellness centre with a spa, plus an indoor-outdoor swimming pool with "expansive floor to ceiling glass screens separating the two sides."

A "dramatic, thirty-foot water feature" will flow into the far end of the pool, according to developers. 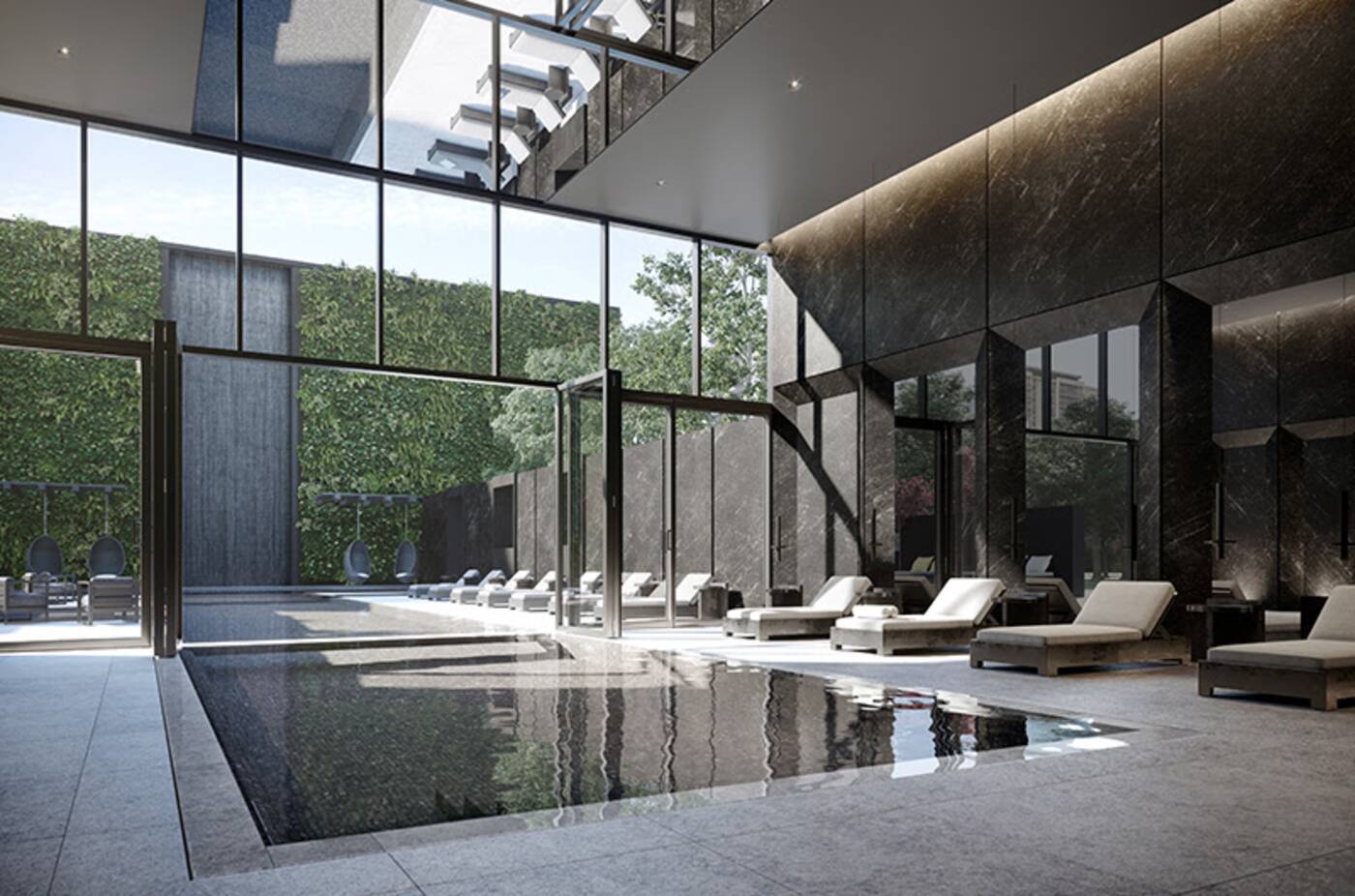 An indoor/outdoor pool will be available for residents of the new Pharrell-inspired building year round. Image via Norm Li/Westdale Properties/Reserve Properties.

"There was a real evolution to the process working with Pharrell and the whole team, from where we started with the interiors and where we ended up," says Kelly Cray of U31 of the project.

"Everything is engineered towards supporting the function of the room. When we transition into the gym or the rec room, the palette shifts to brighter tones in specific spaces to encourage activity and play."

A construction date has yet to be announced, meaning we're still years out from seeing the untitled complex rise at Yonge and Eg. Still, those interested can already register for more information about how to purchase.

Prices are said to start in the low $400,000's, as of right now, but will likely rise in coming years along with the rest of Toronto's real estate stock as the city's popoulation grows faster than the housing market can accommodate.