Weekend events in Toronto is our guide to events happening this Friday, Saturday and Sunday. Here's what's happening in Toronto this June 13-15, 2014.

Taste of Little Italy
Hope you're ready for BBQ, churros, and gelato (and soccer jerseys), because if you haven't heard it's summertime on College Street. Taste of Little Italy is a lighter version of that more popular culinary street festival that happens east of the Don Valley in August - less congestion and a shorter distance, but offering a similar array of food that has little to do with the neighbourhood's original cultural establishment. Live music and performances will compliment the eats all weekend. June 13-15, Little Italy (College between Bathurst and Shaw).

World Cup
People are yelling and getting excited! Let me tell you, yesterday I decided my team is Brazil. Love you, Antonio. Not to make light of what is for some people a very serious game - World Cup fever is stronger than ever in Toronto this year. We've got a list of the city's best patios from which to watch, and a round up of where to watch the game depending on which country has the cutest dogs - I mean which country you hope kicks balls with the rawest passion. 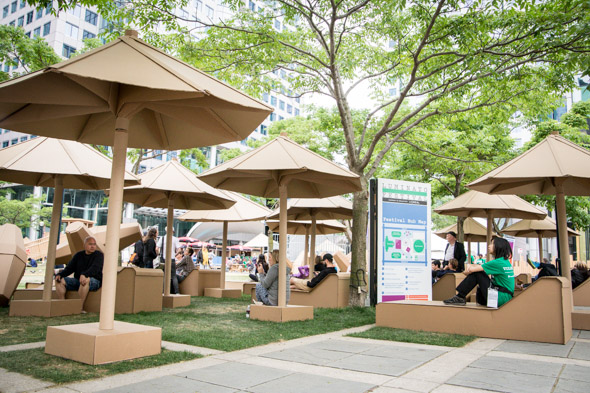 Luminato
On now in Toronto, the Luminato festival celebrates the best and boldest of creative minds, enlivening the city with cultural activities. Check out our full preview here and don't forget to stop by the Cardboard Beach installation at David Pecaut Square. June 6-15th.

NXNE The Photo Show
NXNE's annual photo show is back. See some of the city's best music photography as part of NXNE's art programming. Not feeling the quiet gallery-gaze vibe? The opening party is Tuesday, June 17th from 7:30pm until late. June 13-18, The Black Cat Gallery, (2186 Dundas St W).

The Session Craft Beer Festival
The close of Ontario Craft Beer week and something like the official start of summer for beer drinkers, Session this year is even bigger than ever before. Taking place June 13-14 at the ridonkulously high profile location of Yonge and Dundas square, this year's festivities include live music, food, and over 100 craft beers, including 30 made just for the event in collaborations between craft brewers and artists for "Collaboration Nation" (including, ahem, a hotly anticipated collaboration between this writer and Canadian Brewery of the Year, Great Lakes). Tickets tickets will cost $39.50 and this includes your glass and five tasting tokens. June 13-14, 5pm, Yonge & Dundas Square (1 Dundas St E).

Vegan Pop Up Shop
This pop-up will take place Sunday at Bento Miso. Vendors like ApieCalypseNow! and Hot Beans will be in there between 11am and 5 pm, showcasing baked goods, meals, snacks, body care items, zines and more. Sunday, June 15, 11am-5pm, Bento Miso (862 Richmond St.).

159 Manning BBQ 2014 - Part 1
Wish NXNE was more like SXSW? This Friday and next, Tim McCready wants you to come by his backyard, his living room, and his basement for three different stages of music. It's a house show / BBQ, and it's cheaper than going to Austin. You're already missing this today - but don't fret, it's on until 11pm and Buck 65, Bizzarh, Biblical, the Golden Dogs, Ice Cream, the Pairs, Choir!Choir!Choir!, and Almighty Dreem Egg can still be yours for the watching. It's BYOB and "plates of food" (mmm, food) are $10. Friday, June 13, all day until 11pm, 159 Manning, $20.

NXNE Park Shows
What better way to enjoy free music than to also sit outside in a park on a sunny afternoon or early evening? Parks all around the city - including Trinity Square Park in the Eaton Centre courtyard, Berczy Park in the Distillery Distinct and St. James Gazebo between Church and Jarvis - will feature lunch hour and afternoon performances. Learn more on NXNE's website. June 14-21.

TimesTalks Luminato: David Byrne
Just go to this talk, 'cause it's frickin' DAVID BYRNE (current cultural Renaissance man, of Talking Heads fame). He'll be talking to a pop music critic from the New York Times, as part of a series of talks presented by the newspaper. June 15, 6pm, MaRS Discovery District (101 College St.), $25.

MMVA's
Queen Street is the place to be Sunday night! If you don't value your ear drums. Screaming teenagers will be there to see some of their fave musicians, which they refer to as "celebrities" because what is the difference? Very astute, young teens. If you want to save your ears the whole event will be live streamed for the very first time. Some celebs I'm too old to have heard of will be on the red carpet. Eeee. Sunday, June 15.

For more music listings, check out our This Week in Music, June Concerts, Spring Concerts, and Spring Music Festivals posts.

Girls Rock Camp at NXNE
Girls Rock Camp Toronto, the cool initiative that offers girls and young women a chance to learn an instrument of their choice with strong female mentors and role models has teamed up this year with NXNE for an afternoon at Harbourfront Centre. There'll be a performance with Unicorn Patrol and Brighid Fry on the Redpath Stage, a screening of Girls Rock! The Movie in the Studio Theatre and Women Who Rock! Bingo! in the Boulevard Tent. Saturday June 14, Harbourfront Centre.

The 2014 Toronto Animation Arts Festival
TAAFI will bounce ever-so-perfectly Friday, June 13 until June 16 at Corus Quay and George Brown College on the Waterfront. The fest's programming schedule includes a gala party, tons of screenings, talks, workshops, demos, kid-friendly programming (I won't get into animation not being just-for-kids because we're all past that, right?), a market, free costumed life drawing, and more. This year's highlights will include Michel Gondry's new Noam Chomsky-starring animated feature and a tribute to Norman McLaren, arguably Canada's best known animator. Ticket info can be found here. June 13-16, Corus Quay & George Brown College on the Waterfront.

All The Sex I've Ever Had - Luminato
Youth is wasted on the young, especially when it comes to dialogues about sex. Toronto-based research-art atelier Mammalian Diving Reflex present All The Sex I've Ever Had, a performance/discussion with a group of older members of society, where they will provocatively regale their audience with stories about their sexual adventures and misadventures. Having been performed internationally, Toronto will be the seventh stop for the show, bringing in a roster of international players, speaking German, English, Czech, and Mandarin (with English subtitles). June 12-15, Isabel Bader Theatre (93 Charles St. West), $35.

'100 Crushes' Book Launch and Signing
One for fans of comics and graphic novels: Elisha Lim's 100 Crushes brings five years of queer comics together in one soft cover book. That book ain't free, but the launch is, and you can also check out Robert Flack / John Greyson / Elisha Lim / Kiley May's Generations of Queer, too. Sunday, June 15, 2pm, Onsite [at] Ocadu (230 Richmond Street West, Street Level).

Luminato's Day of Literary Activity
Luminato is showing their bookish side on Sunday. Lit fans should be in Trinity Bellwoods this Sunday for A Literary Picnic, plus take a Literary Walk through Kensington Market, the ravines, and/or Queen Street West.

Algorithmic
This two-room warehouse party is pretty much the opposite of the bottle service club scene: BYOB (no glass), chai & smoothie bar, and an "Interactive Labyrinth Installation". The techno room features live performances by Arthur Oskan, Mark & Matt Thibideau, and Spooloops, while in the bass room you can catch DJs like Anthologic, Jonah K and many others. June 14, Jam Factory (2 Matilda Street) 10pm, $25.

For more dance listings, check out our Top Dance Parties in Toronto in June post.

Roncy Rocks
Roncy's street fest has a packed music line up on several stages, plus a juried art sale, a sidewalk sale, and more. They even put a sampler together on Reverb Nation if you'd like to hear the bands in advance, which is pretty endearing. Saturday, June 14, Roncesvalles Village.

Father's Day Gifting Shoppe
Did you forget your pops? Hey, it's not like he's going to disown you for that (not for that). Shop men's fashions and gift items (by appointment or by dropping in) while sipping some Stella Artois. Until June 15, 399 Queen Street West.

Toronto Flower Market
Why not go spend some time with flowers? Here's a sneak peak at what the market looks like in its new digs this year. Saturday, June 14, 10am-3pm, 1056 Queen St. West.

Northern Panic: Cosplay Clambake & Food Drive w/ Scavenger Hunt!
Bring donations of non perishable food items (plus snacks, toys, sunscreen, and picnic blankets) to this food drive / scavenger hunt with a twist. The twist is that everyone is dressed up in cosplay (cool costumes), because dressing up in cool costumes and going to the park is awesome. Bonus: I'm so feeling the Allan Gardens dog park lately - so many cute pugs with overbites. I think I might dress as a pug dressed as Sailor Moon, so say hi to me. Saturday, June 14, 11am, Allan Gardens (19 Horticultural Ave).