Weekend events in Toronto is our guide to events happening this Friday, Saturday and Sunday. Here's what's happening in Toronto this November 16-18, 2012.

Santa Claus Parade
Santa Claus is coming to town as this Sunday marks the 108th Santa Claus Parade in Toronto. A tradition started by Eaton's department store in 1905, the parade continues its legacy by beginning at 12:30PM in Christie Pits park, then heading eastward on Bloor. Television coverage begins at 12:30PM and the parade ends at St. Lawrence Market, with crowds welcome along Bloor, University and Front streets. Bundle up!
Christie Pits Park (750 Bloor Street West), November 18, 2012, 12:30PM Free

Cavalcade of Lights If the Santa Claus parade is just too kid-ridden for you, but you're still looking to jumpstart your holiday spirit, head to Nathan Phillips Square for the Cavalcade of Lights. There will be live music from some unknown artists, but it's really all about the fireworks. Go for them not the music. Trust me.
Nathan Phillips Square, November 17, 2012, 7PM, FREE

Unibrow Bash: A Frida Kahlo Jam
Inspired by the Mexican artist with a singular eyebrow, Unibrow Bash: A Frida Kahlo Jam is a colourful, one-night party at The May to celebrate painting and women who come as they are. Stick-on unibrows and make-up artists willing to paint one on will be on hand as activities like live mural painting and performances by Spawn of Phil and DJ Geordie Gordon take place. This party coincides with the Frida & Diego: Passion, Politics & Painting exhibit at the AGO. Text 647-929-9650 for reduced cover.
The May (876 Dundas Street West), November 17, 2012, 10PM $10

Fare Game: Life in Toronto's Taxis
A multimedia play that travels alongside taxi drivers during the daily minutiae of their work, Fare Game: Life in Toronto's Taxis opens at Theatre Passe Muraille this Friday evening. A changing mode of transportation with the advent of affordable hired car services and the increasing population of a traffic-ridden city, the tale of the Toronto taxi driver is told by the actor/creators of the show, Ruth Madoc-Jones, Marjorie Chan, and Alex Williams. Tickets are available at the theatre box office and the show runs until December 8th.
Theatre Passe Muraille (16 Ryerson Avenue), November 16-December 8, 2012, 7:30PM $30-$35 regular, $25-$30 student/senior/artist

Sirius Xm & Perfect 10 Present: The 4th Anniversary Show And After Party
It's an anniversary of something somewhere, so you might as well celebrate it by checking out some stand-up at Toronto's newest comedy club, The Lot on Ossington. The 4th Anniversary Show, presented by SiriusXM, will be recorded for XM Radio with an after party to follow. If one of the comedians--like Sara Hennessey, Jean Paul or Chris Robinson--bomb, not to worry, there are nine in total so someone is guaranteed to make you laugh at this large ensemble show.
The Lot Comedy Club (100 Ossington Avenue), November 17-18, 2012, 9:30PM $15-$20

For more film listings, check out our This Week In Film post. 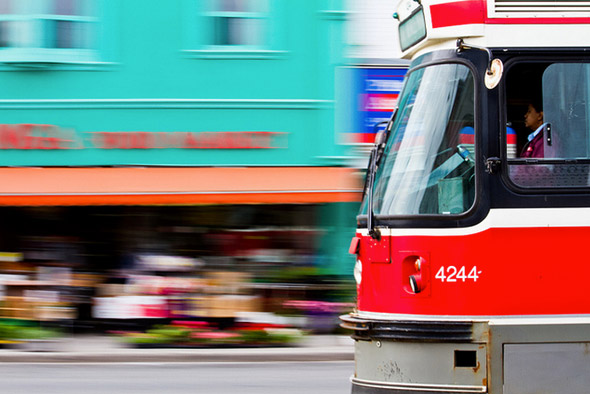 501 Streetcar Food Tour
Ride the Queen streetcar through six neighbourhoods and make six stops at local food joints this Saturday on the 501 Streetcar Food Tour with Foodies on Foot. Beginning at Parkdale's Glory Hole Doughnuts and heading east to Leslieville, this FOF tour will be a 5-hour journey on Toronto's longest surface route to find the best food, baked goods and drinks with an expert guide. Tickets are available through the Foodies on Foot website. (Hint: use your own metropass and tickets are only $65.)
Glory Hole Doughnuts (1596 Queen Street West), November 17, 2012, 11AM $75

For more food listings, check out our This Week In Food post.

DX Intersection
All forms of design meet at Intersection, the Design Exchange's new annual fundraiser gala. A large celebration of Canadian architects, artists, chefs, filmmakers and designers, the most impressive party of the year will feature art installations by Douglas Coupland, Niall McClelland, Alex Durlak, Scott Cudmore and Jonah Falco. The multi-level DX will have several DJs spinning with a special set by Toronto hip-hop electronica trio Keys N Krates. Other event highlights include a moonshine distillery, raffles, a silent auction and a food market, complete with food trucks at the end of the evening. Tickets are available through the Design Exchange website with VIP passes featuring an early dinner with Douglas Coupland in attendance.
Design Exchange (234 Bay Street), November 16, 2012, 8PM $175 general, $150 member, $75 student

Bored & Mentally Ill
Bored & Mentally Ill attempts to visually express the neuroses and various psychological states that produce creativity through the works of local artists. Fifteen painters, photographers and illustrators draw their own internal environments during the process of creation, no matter how disturbing it may be. The opening reception of the show takes place from 8PM-3AM in the basement gallery of Vintage Grounds at Bloor and Bathurst this Friday evening.
Vintage Grounds (760 Bathurst Street), November 17-23, 2012, 10AM Free

Kreayshawn with Rye Rye & Honey Cocaine
No matter how many times you ask what a Kreayshawn is, she just won't go away. 23-year-old Oakland rapper and White Girl Mob member Kreayshawn plays Toronto to disrupt your otherwise quiet Sunday evening. Joined by Baltimore rapper Rye Rye, Kreayshawn is set to take her shrill rap to stage at The Hoxton along with local hip-hop artist Honey Cocaine and trap pop sensation Chippy Nonstop. Tickets are available through Ticketweb, Rotate This and Soundscapes.
The Hoxton (69 Bathurst Street), November 18, 2012, 8PM $22

CunninLynguists at the Opera Hall
The band with the cleverest name out there roll through Toronto Saturday night in support of Oneirology, released in March. It's hard to believe these guys have been around since the early 2000s, but their brand of atmospheric Southern hip hop is masterfully produced and they're known for being able to to translate this to their live shows, a feat that's not necessarily the easiest thing to pull off. Check out @TheUnionEast's Twitter feed for a ticket giveaway.
Opera House (735 Queen St E). Doors at 8PM, 19+, $20

For more music listings, check out our Hot Ticket and November Concerts posts.

101 Markets @ 3030 Dundas West
Vintage and handmade artisanal goods come to the Junction's latest night spot, 3030 Dundas West, during 101 Markets. Vendors specializing in vintage and contemporary designs, independent or retail goods, all gather at 3030 this Sunday for a monthly one-of-a-kind market. The market opens early and closes by 5PM.
3030 Dundas West, November 18, 2012, 10:30AM Free

Roger Vivier Lecture Series "Looking Pretty: How The 1950s Celebrated The Female Figure"
Victoria Dinnick knows vintage as the owner of one of Toronto's most successful vintage retailers, Gadabout Vintage Clothing. Taking part in the Roger Vivier Lecture Series, Dinnick will walk attendees through the trends of the 1950s in "Looking Pretty: How The 1950s Celebrated The Female Figure," with samples of pencil skirts and crinoline from her own collection. Dinnick will encourage guests to feel and touch the clothing samples during the illustrated talk so prepare for a hands-on experience. Ticket price includes entry to the Bata Shoe Museum, valid for all day Sunday.
Bata Shoe Museum (327 Bloor Street West), November 18, 2012, 1PM $16

Swap!--Don't Shop! Clothing Swap Party
All your out-of-season and unwanted clothing wanted for the return of Swap!--Don't Shop! Taking place at Beaver Hall Gallery this Saturday afternoon, this clothing swap party is only $8 to enter when joined with an armful of gently used clothing. A stylist will be on hand to help second hand shoppers purchase the right goods and on-site alterations will also be available. No used clothes you're willing to give up? No problem--just pay an extra $5 at the door. Any unsold items will be donated to local charities at end of day.
Beaver Hall Gallery (29 McCaul Street), November 17, 2012, 12PM $8

Photos by sniderscion and Greg David