Weekend events in Toronto is our guide to events happening this Friday, Saturday and Sunday. Here's what's happening in Toronto this September 28-30, 2012.

Scotiabank Nuit Blanche 2012
Toronto's citywide contemporary art festival returns for its 7th sleepless night during which pedestrians roam the streets at ungodly hours to visit installations, performance pieces, and interactive art stations in three zones placed throughout the downtown core. Nuit Blanche kicks off at sunset with artists pulling all-nighters until dawn. For zone highlights, check out our breakdown of the 20 most intriguing Nuit Blanche exhibits and a few, shall we say, renegade events. How late can you go?
Various locations, September 29, 2012, 7:03PM Free

Harvest Fair
If pumpkin spice lattes just don't cut it as a signifier of autumn for you, Harvest Fair will. With pumpkin carving contests and apple pie bake-offs, autumn-themed activities and foods will ring in the new season along Mount Pleasant Road. Music, sidewalk sales and tastings will also take place at the dozens of small businesses that participate in this annual neighbourhood fair, which runs all day Saturday. If comfort food could be a festival, Harvest Fair would be it.
Mount Pleasant Village (Eglinton Avenue and Davisville Avenue), September 29, 2012, 10AM Free

Calvin Harris
Calvin Harris, the Scottish DJ and producer responsible for helping Rihanna find love in a hopeless place, plays the Sound Academy tonight while on a limited North American tour with his third studio album 18 Months. Harris, whose album is a namedropper with collaborations featuring Kelis, Ne-Yo, Florence Welch and Ellie Goulding, will perform songs from the upcoming album along with fellow tourmates BURNS, Nick Thayer, Dvbbs and JELO. This show is 19+ and tickets can be purchased through Ticketmaster, Play De Record, Soundscapes Rotate This, Dr. Disc and Culture Rising.
Sound Academy (11 Polson Street), September 28, 2012, 9PM $35-$45

Anthrax
'80s heavy metal legends Anthrax are still touring--believe it or not--and they make a stop this Friday night at the Danforth Music Hall to deafen your ears and get you headbanging. Though they're accompanied by younger metal bands Testament and Death Angel, Anthrax isn't your dad's hair metal group--these guys are still pumping out albums and are currently touring with last year's LP Worship Music, which is their 10th studio album. Tickets available through Ticketmaster.
Danforth Music Hall (147 Danforth Avenue), September 28, 2012, 8PM $35-$45

For more music listings, check out our Hot Ticket and September concerts posts.

ClickinWalk 2012
Photographers walk the city together on a guided tour, cameras in hand, on ClickinWalk 2012. Meeting at St. Lawrence Market, the tour is all about capturing the perfect shot, so this photography tour will include plenty of photo opportunities at historic landmarks like The Gooderham Building and St. John's Cathedral Church. Participation must be confirmed through Uniiverse but it's free to book a spot. Suitable only for those who can click and walk at the same time.
St. Lawrence Market (95 Front Street), September 29, 2012, 3PM Free

Art of Fashion 2012 Design Competition RAW
Ten Canadian up-and-coming fashion designers compete in an annual design challenge at Nuit Blanche to become Canada's Most Promising Designer. Displaying six pieces of a collection centered on the theme of RAW and showcasing their work in a fashion show, the designers are all judged by Nuit Blanche attendees, who will cast their votes on a People's Choice Award ballot. Admission is free, but it's an event on its own so be sure to dress to impress.
Hazelton Lanes, Oval Square (87 Avenue Road), September 29, 2012, 7PM Free

Dear Liar
The Dora Award-winning theatre company Why Not Theatre goes Bollywood with international stars Naseeruddin Shah and Ratna Pathak performing in a new production at Regent Park Arts and Cultural Centre, beginning tonight. Jerome Kilty's Dear Liar will feature the actors--who are married in real life--in the roles of playwright George Bernard Shaw and Mrs. Patrick Stella Campbell, an actress with whom Shaw had an emotional affair and later used to inspire his characters. This is the first theatrical production in the new performance space and it runs this weekend only.
Regent Park Arts and Cultural Centre (585 Dundas Street East), September 28, 2012, 7:30PM $22-$88 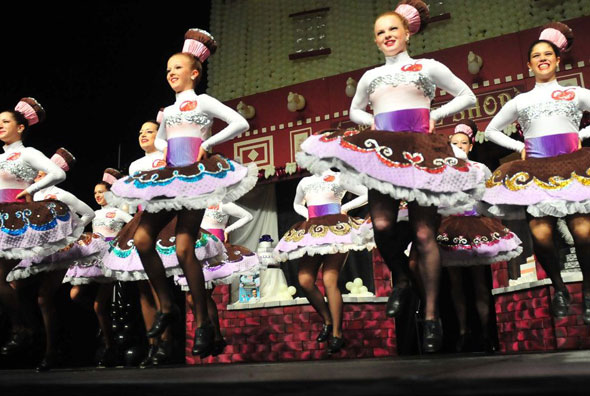 Canada's Baking and Sweets Show
Sugar fiends, take note: It's that time of year again. The country's best baking convention returns to the International Centre with Canada's Baking and Sweets Show, which showcases impressive cakes, sweets and desserts from national baking gurus. This year, celebrity appearances will include Duff Goldman, the DC Cupcakes Girls, Anna Olson and SugarStars. Check out the awesome display of intricate designer cakes, watch baking demos and eat until your sweet tooth aches. Tickets are available at the doors.
International Centre (6400 Airport Road), September 28-30, 2012, 11AM $14

Ride and Go Feast: Gone Southern
Spicy foods, BBQ flavour, and lots of hooch are what make mealtimes good and southern, which is what Ride and Go Feast is aiming for at this month's event. The tour starts at the King and Church pick-up location, where the group will gather before venturing off to the best southern food spots in Toronto, spending a Sunday getting liquored up on Jack Daniels and feasting on southwestern comfort foods. There is a maximum of 24 seats available on the tour so purchase tickets quickly. In keeping with southern hospitality, all profits will go to the Daily Bread Food Bank.
39 Church Street, September 30, 2012, 4PM $85

For more food listings, check out our This Week In Food post.

Toronto Palestine Film Festival
Now in its 5th year, the Toronto Palestine Film Festival has achieved great success, and is expanding this year to five venues with films of every genre, and a focus on the themes of art, poetry, music and cuisine. With several world premieres taking place at TPFF, it is no surprise that the gala opening film, Abdallah Omeish's award-winning The War Around Us is a Canadian premiere. Several special events will take place throughout the festival, including a traditional Palestinian brunch and a closing concert. This festival is much more than just a celebration of film, so join the TPFF community in honouring Palestinian culture before the festival closes October 7th.
Various locations, beginning September 29, 2012, $10 regular, $7 student/senior

Alice In The Wall
A new spin on the usual combination of Pink Floyd's Dark Side of the Moon and The Wizard of Oz, The Projection Booth will host a special screening of Alice In Wonderland tonight set to the music of Pink Floyd's The Wall. In what they are calling a 420-friendly environment (with a liquor license!), this is the greatest movie-viewing experience you will have this weekend--viewing a classic film on the big screen with live performances and a DJ accompanying. Doors open at 9PM and this will be a popular event so arrive early to get your tickets.
The Projection Booth (1035 Gerard Street East), September 28, 2012, 9PM $10

Headliners: Standup Comedy at the Bloor
The Bloor Hot Docs Cinema hosts an entire weekend of comedy in honour of the Just For Laughs Festival, screening stand-up films accompanied by sets with some hilarious up-and-comers like Neal Brennan, Darrin Rose and Big Jay Oakerson. Beginning Friday with Sarah Silverman: Jesus Is Magic, the highlight is likely to be the Saturday night film, because Eddie Murphy Raw was filmed in '87 and is still so, so quotable. Individual films are $11, but an all-access pass for true comedy lovers is just $22. It's worth it, friends. Worth it.
Bloor Hot Docs Cinema (506 Bloor Street West), September 28 (beginning at 9:30 PM) - September 30, 2012, $11