Scotiabank Toronto Caribbean Carnival Grand Marquee Parade
The showcase of Caribana has arrived! The Grand Marquee Parade featuring the colourful and ornate costumes, steelpan bands and dancing in the streets begins this Saturday. This internationally-known festival is expected to draw near a million people to the streets of Toronto but if you're not interested in maneuvering the crowds, there are upgraded seating options (cabanas!) available this year at Ontario Place.
Exhibition Place (100 Princes' Boulevard) August 4, 2012, 10AM Free

VELD Music Festival
Not heading to Osheaga? VELD Music Festival, the city's largest carnival of electronica, is taking place in Toronto's front yard at Downsview Park with acts like Deadmau5, Avicii, Steve Aoki and Steve Angello playing to crowds of over 25,000 people at this two-day event. Tickets are still available at Soundscapes and PlayDeRecord but prices are rising fast.
Downsview Park (35 Carl Hall Road), August 4-6, 2012, 12PM $88.99-$383.45

Snoop Lion & The Jungle
Snoop Lion, the artist formerly known as Dogg, brings his band The Jungle to The Hoxton to showcase his freshly released reggae album Reincarnated in an intimate club show. In town for the Caribbean Carnival, Snoop's show is all about his alter ego's new Caribbean sound and tracks off of Reincarnated produced by the likes of Major Lazer's Diplo. Drop all expectations of izzle speak and melodic alliteration and grab tickets at Rotate This and Soundscapes.
The Hoxton (69 Bathurst Street), August 3, 2012 7PM $60

The Black Keys with The Shins
Cramming in a performance between Lollapalooza and Osheaga, The Black Keys join The Shins to play the Amphitheatre this Saturday. Banding together in alt rock goodness, these two indie acts are guaranteed to be the show of the long weekend. Tickets may be sold out but keep an eye on Ticketmaster for a last minute release.
Molson Canadian Amphitheatre (909 Lakeshore Boulevard West), August 4, 2012, 8PM $35-$80

Justice and M83 with Austra and Buraka Som Sistema
This is the weekend for great musical acts in Toronto so to round out the shows, Garrison Common features an evening with French electronic bands Justice and M83 on Saturday night. Local Polaris Prize shortlisted act Austra will join in on the indietronica fun along with Portuguese music project Buraka Som Sistema. Tickets to this outdoor festival are available through Ticketweb.com.
Fort York: Garrison Common (100 Garrison Road), August 4, 2012, 5PM $49-$69

For more music listings, check out our Hot Ticket post and our comprehensive list of Toronto concerts taking place in August.

Artisans at the Distillery Show
The Distillery District welcomes artisans to its 19th century streets to sell their original creations and wares at this outdoor weekend art show. Featuring over 75 artists from across Canada, the event is the brainchild of artist and veteran producer Lory MacDonald. This free event features pottery, photography, crafts, art, body, clothing and food products that are all handcrafted and Canadian-made. The show runs all weekend so stroll through the Distillery for a look.
Historic Distillery District (55 Mill Street), August 4-6, 2012, 11AM Free 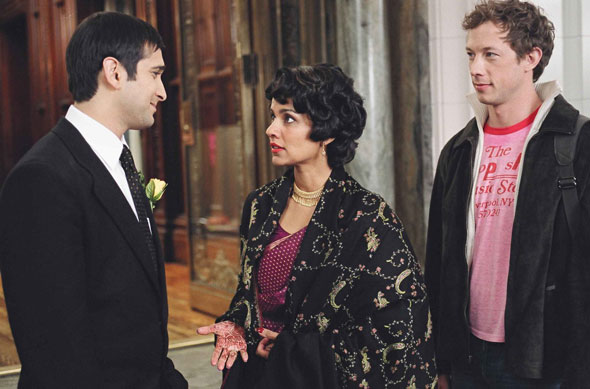 Backyard Cinema: Touch of Pink
Alim is a gay man living in London, where he is trying to escape his confined Toronto life, when his devout Muslim mother shows up for a visit in Touch of Pink, a 2004 Canadian romcom. Screening Saturday night in Cawthra Square Park as part of the Green Space on Church initiative, lovers of all kinds are invited to cuddle up under blankets to enjoy a free outdoor screening presented by the Church Wellesley Village BIA.
Cawthra Square Park (519 Church Street), August 4, 2012, 9PM Free

Really Really Free Market
Happening on the first Saturday of each month, the Really Really Free Market is really, truly free. Held in a community space, eventgoers are asked to bring goods and offers of services they do not need in order to barter in exchange for something they want. Described as a potluck for goods and services, everyone offers something in a fair exchange and walks away with a free find. Simple, right? Offerings must be submitted by 4PM and attendees are invited to a campfire dinner at 5PM (the food is served with a suggested donation of $5).
Campbell Park (195 Campbell Avenue), August 4, 2012, 10AM Free

Toronto Island Party
Toronto rock ska legend Prince Perry is hosting a free party on Toronto Island this Sunday that includes free music, BBQ and booze. Guests are invited over to the island at 6PM for cocktails before Perry performs live with his back-up band The Gladtones at 8:30PM on the upper deck patio of the island marina bar. If you're looking for a laidback way to spend your holiday weekend, head to the island and get hyped on ska.
Toronto Island Marina, August 5, 2012, 6PM Free

Pop Kult #10
For all those not attending any of the city's many music festivals and concerts this weekend, but who still want to enjoy some good music, definitely consider Pop Kult. With Joakim playing a set, you are in for dark disco meets indie rock and pop. The lineup is among Pop Kult's all-time best, so don't miss out. Tickets via TicketWeb.
The Gladstone Hotel (1214 Queen Street West), August 3, 10PM

Outclass Summer Sale Pop-Up Shop
Outclass is opening a pop-up shop this weekend at A.R.T. Bike Gallery, where clothes and bikes meet in a happy medium. The spring and summer 2012 collections by Outclass will be on sale for 50%, alongside vintage bike frames by A.R.T. Bike. This cash-only event will take place Friday and Saturday but the earlier you go, the better your chance at finding the pieces you want in your size.
Outclass (127 Ossington Avenue), August 3-4, 2012, 5PM

Cultura 2012
Cultura festival returns this weekend with food from restaurants and caterers across the city, sampling the best of international cultures. With plenty of artists performing at this weekly Friday night event, vendors like Casa Manila, Agave y Aguacate and Motimahal Restaurant will be frying, boiling and baking foods for eventgoers to munch on. Experience the diverse traditions of world cultures through tasty and cheap food at Mel Lastman Square tonight.
Mel Lastman Square (5100 Yonge Street), August 3-10, 2012, 5PM Free

A History of Forgetting
Clay and Paper Theatre takes on its 16th season of live performances in Dufferin Grove Park beginning this weekend with David Anderson and Krista Dalby's A History of Forgetting. A baby narrator takes the audience on a journey through the memory--finding those moments lost, buried and discarded--to surreal locations where anything is possible. After the show, "Memory Tea" will be served to attendees. This event is pay-what-you-can with a suggested donation of $10.
Dufferin Grove Park (875 Dufferin Street), August 3-26, 2012, 7PM PWYC

Lead photo by yedman, film still from Touch of Pink