They were there to celebrate the launch of the upcoming third season of Webdreams, a docu-drama on Showcase's Fridays Without Borders.

I had attended the premiere of season one in Montreal a few years ago when I was working for 2Much, and recall a wild time. People were making out everywhere, classic bathroom lines of coke were being snorted. I guess, everything you'd expect the nature of such a party to be.

"We love the journey, but it's not as easy as people think," Rhodes said. "People look at a DVD and they think they just show off to the camera and have sex."

"You have to adjust to circumstances - we were getting ready to do this shoot, but then an ear infection came up."

Drawing from more than 600 hours of footage, the docu-drama captures the glitter and grime of this multi-billion dollar industry, as seen through the eyes of six new characters, including Maxine X and Scott.

Paris (not to be confused with Paris Hilton, even though she's a blonde) is a bonafide "solo girl," meaning she doesn't do any scenes with anyone else but herself on Webcam. She says she got into the adult industry after many restricting years as a "good girl" at a Richmond Hill private school. 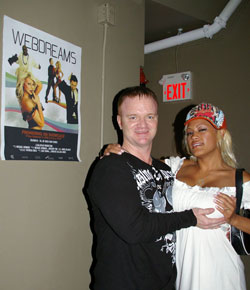 She launched Play With Paris and Cam With Paris, which she boasts has over 5,000 paid members worldwide.

The 10-part half-hour series produced by Galafilm premieres Sep. 5 at 10 p.m. on Showcase.