Here's a recipe for a quick and easy art show:

Take a slightly-naughty theme, gather a bunch of submissions that kind of relate, you know, in an ironic way and secure a venue where you can play the music loudly and serve the booze cheaply.

Hopefully the venue will come with a crowd of pretty young exhibitionists and, of course, all of your friends will show up so everyone should have a pretty good time. Big Dicks and Barbie Dolls, a recent show at Spin Gallery, was a terrific party but what about the art?

Sexuality and pop culture have always been favored topics of the artist and in my time at OCAD, I saw a lot of bad art and even some good stuff exploring that theme. This show is no different. Some of it was alright but a lot of it was, in the words of a participant who wishes to remain anonymous, "juvenile" and I would have to agree.

As usual, illustrations ruled the show, at least technically if not conceptually. The rampaging cock creature was cool and detailed enough to be visually stimulating if nothing else but was also emblematic of what was wrong with the show as a whole.

With the exception of the glass jar full of chewed-and-spat-out cyber sex conversations, I can only assume there wasn't a whole lot of thought put into the majority of these pieces that didn't extend beyond a wink-wink-nudge-nudge reaction to exposed naughty bits. At least one artist decided to crochet her depictions of hardcore genitalia but when that kind of one-off is amongst the best-in-show, you're operating on a lower common denominator than this theme demands. Waxy naked women cavorting on a canvas reminds me of a t-shirt I picked up in South Carolina. It's not very interesting. It's not even arousing which is, I suppose, worse. 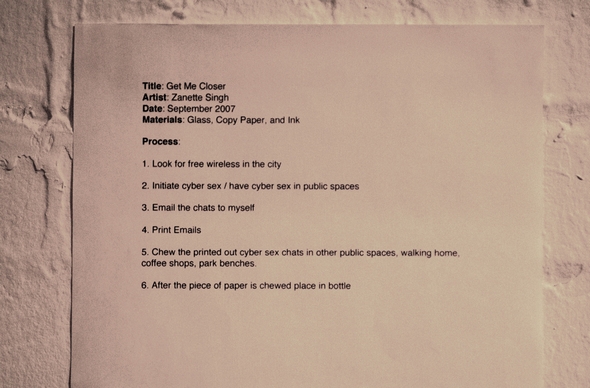 My favorite piece was the winged Al Bundy wearing a Viking helmet which was a bit more subtle and in the words of the immortal Mel Brooks, "rose below vulgarity." The painted cityscape at the entrance was also competent and would look really great in my hallway which is about the highest praise I can bestow on any work of art (leaving aside any discussion of the sublime which aside from Larry Clark's films, rarely features in work about sexuality anyway).

Frankly I'm tired of BJ shots, soft-core photos and other phallic imagery. You'd think no one ever read a porno mag or bought a novelty LP. This isn't to say that those two pioneers have said all there is to say on the subject (and god knows its getting more difficult for artists to do something interesting when they splash around in a small pond like Toronto, hanging out with the same people, consuming the same media and going to places like OCAD) but simply depicting these kind of things isn't good enough; you actually need to say something too. I also think there was a fashion show although it was more blink-and-you'll-miss-it than hot-n-bothered haute couture. 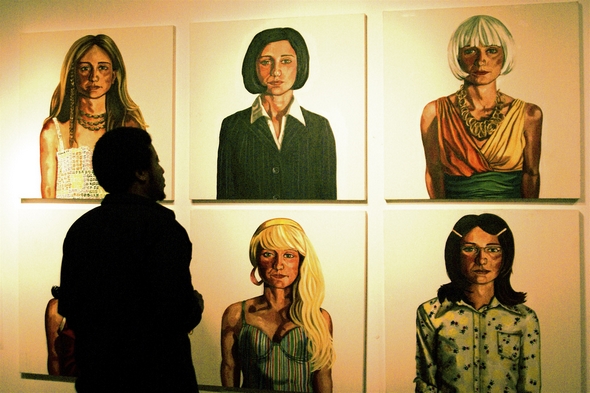 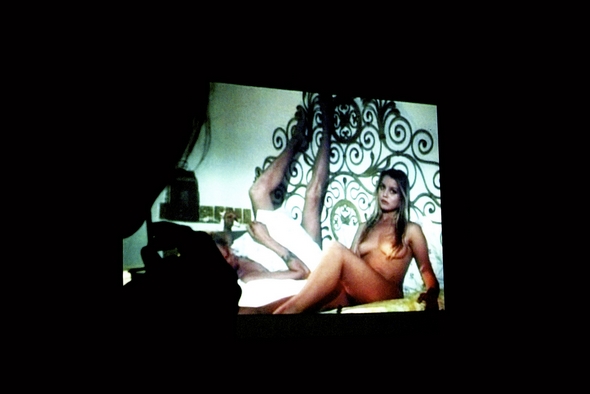 Mind you, I'm not of those close-minded folks who believe that depictions of pornography are degrading and coarsen any dialogue that might result but I'd appreciate a something a bit more challenging with my slice of sluttiness. How about a piece that explores what people bring into their digestion of porn via their own experiences? Or how about a questioning of gender identification beyond chicks with dicks? The possibilities are endless and not too difficult to arrive at; especially when you delve deeper into people's often-flippant answers to questions concerning how they perceive their sexuality and that of others around them.

Hell, anyone can find a bunch of tawdry videos at Suspect and project them on a wall (giving your own JPEGs a much-needed boost of credibility) but when are we going to realize that these superficial depictions are fluff and don't provoke any critical discussion of the theme, a cop-out that is all-too-common amongst younger artists?

For those of you looking for something with a bit more depth, I suggest checking out Nuit Blanche for Nightless City, a group exhibit that reimagines a strip of Church St. between Wellesley and Andrew as a red light district. Or for those of you who harbour unrequited crushes on high-school teachers from years past, head over to Hart House and you might be asked to slow-dance with one of the teachers. Copping a feel is encouraged of course.

So I didn't like the show but I did have a good time and I would be the last person to suggest that some poorly thought-out art got in the way of me having a good time. The music wasn't half-bad and it got a whole lot better when some dude got up on a box and started freestyling to some beats provided by the DJ. When I wasn't drinking two-fisted, I was dancing my ass off and with the tunes and a very-fine dance partner the art faded into the background which is where it belonged. 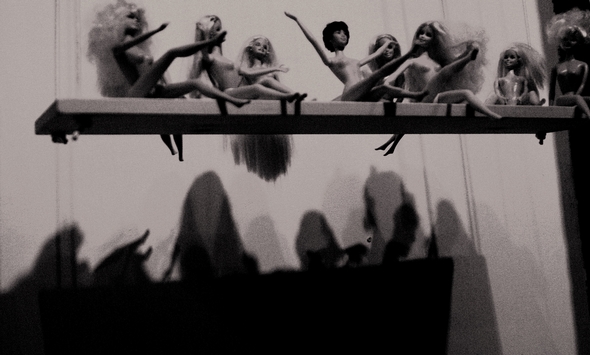