Life Drawing Flaunts its Sexy Side

It's 7:30pm and I'm sitting in the back room of the Cameron House, pencil and pad in hand, waiting for the model to get on stage. An unconventional environment to be sure but quite appropriate for a show that had promised to be anything but. I was here for the premiere of Dr. Sketchy's Anti-Art School, a life drawing session with a healthy dose of burlesque all over it.

The idea of sharing a pint and a laugh with friends and composing some sketches that extend beyond the usual doodling on a bar napkin sounded like a good to me. Giving me even more impetus were my memories of quiet life drawing classes at the Ontario College of Art & Design and the endless succession of sketchy, look-to-the-left-and-cough art-school models who got hard-ons whenever girls in the class glanced downward. Besides, you can go on all you like about how rewarding and challenging it is to capture average people on paper but I know I'd rather draw a beautiful woman any day.

For this particular evening, the featured model went by the name of Veronika and she regularly performs with the Shameless Dames, a burlesque troupe. Despite this seasoned background, she seemed to be rather nervous that night, maybe because she had no idea what to expect.

She needn't have worried; the Cameron doesn't have a whole lot of room and of the thirty or so folks who came, most had an art school background and seemed to take their drawing rather seriously. While she was performing her opening dance number, some of them even tried to capture it.

Veronika then got busy with a variety of one-minute poses which gradually got longer throughout the course of the night. By the time she'd gotten around to the ten-minute poses, there had been several wardrobe changes, my favorite being the space-girl armed with Nintendo light guns. There's really something for everyone here, from kitty costumes to Soviet kitsch, and with the models being encouraged to get creative with what they wear (and what they leave out), you never know what you're going to see.

To liven things up a little, the audience was given drawing challenges, provided by words randomly plucked from a hat full of our suggestions, where we had to incorporate the chosen theme into our drawings. The winner, chosen in a line-up with an applause-o-meter, received a prize which ranged from pasties (won by a very lucky, tall red-headed guy) to CDs to free shots from the bar.

The skill level of the participants seemed to vary wildly, all the way from my crude scrawls to some very accomplished work. I found that, just like with anything, the more I practiced the better I got. Hell, by the halfway mark, my sketches were actually recognizable as people. Point being, you don't need to be a real-live artist to partake in this sexy life drawing; anyone who likes a little art with their bar should check this out. 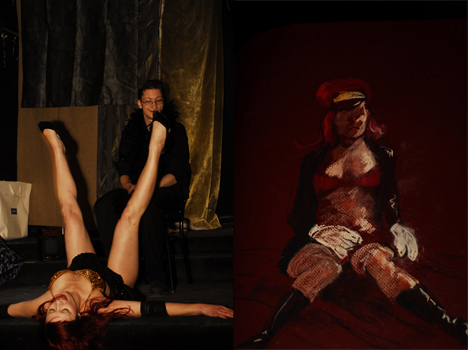 The next Dr. Sketchy's is on the 26th of February.