Get to Know a Chef: Adisa Glasgow, 3030 Dundas West

Though he's just turned 30, chef Adisa Glasgow says he feels like an old soul. But his menu at 3030 Dundas West in the Junction isn't sticking to the classics. Glasgow wins over crowds with creative dishes that pay homage to his heritage and other culinary influences. The Trinidad native talks about his vision for bringing Caribbean food to Toronto, surprising his diners with unexpected ingredients, and one dish he's currently obsessed with.

Everyone in my family cooks, and I screwed up a lot trying to help out in the kitchen when I was younger, but I always wanted to be a chef. We always had huge meals; Thanksgiving at home was not like here. If you had a decent year as far as money was concerned, you fed the neighbourhood, so that was a lot of fun.

Where did you grow up and what brought you here?

Half in Trinidad and half in Vancouver. I came to Canada when I was 12, and I moved to Toronto about a year ago. I was chasing a woman, who was Italian, so I wanted to move to England to move closer to her. But being Trinidadian and getting a work visa there is pretty impossible, so then I decided instead of coming back to Vancouver, I might as well try out Toronto and see what the scene is like here.

How would you describe the food scene in Toronto?

It's exciting. There are a lot of hungry, young chefs, and a lot of new restaurants. I just felt like everyone out here was trying to really push the envelope. It's competitive as hell, and it's hard to try and come up with some really innovative stuff. 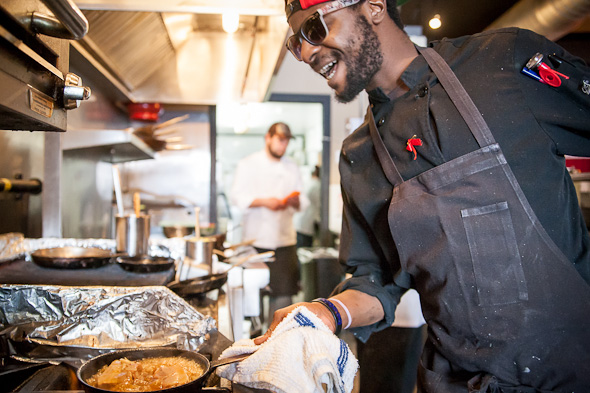 I started as a dishwasher in a restaurant. I never went to school; I just started washing dishes, then started prepping. From there I moved to garde manger, then sauces, then eventually moved through the whole thing. I even took a hiatus for a year and worked in the front end, just so that I could get a good grasp on what's going on. Then I did my tour around Vancouver, working at different restaurants. I decided to settle down in an Italian restaurant, Quattro, and the chef, Bradford Ellis was very good. He's a pretty jovial guy, but he taught me a lot.

What's the biggest lesson you've learned working as a chef?

Probably just to put your ego aside and learn from the people you've hired. Just in the short time that I've worked with other chefs in this city, I've noticed there's a little bit of arrogance and I'm not sure where it comes from. Maybe it's because of the press they've gotten, that they think they're rockstars, but I've learned to keep the ego in check. Also, just to be able to do what I want, because honestly, I just put stuff together hoping it tastes good. Don't stop making something because you feel like the crowd's not going to love it. I had to stand through a lot of things on this menu to let it shine and give everybody a chance to try it.

Craigslist. I quit Grand Electric, and I was going to move to Winnipeg because my dad was really sick. Then I got a phone call from him saying the cancer was in recession and he was doing well, so I decided to stay here. I was looking through the classifieds, and my girlfriend found this head chef position so I figured why not. I came in and they picked me, so I guess I got lucky.

You have some pretty adventurous items on your menu. How do you feel the food works with the bar crowd?

I do get a little roadblock with people sometimes, they don't know about eating beef cheeks, dandelion greens, or that black cod is worth $26. People come in and see pinball tables, brick walls, and they kind of get thrown off a little bit. But once they relax, they realize that you don't need to be on King Street or have white tablecloths to enjoy a good meal.

People really grew on a lot of stuff; the pigtail torta was tough to sell for a while, then all of a sudden we're flying through them. So they're opening up to me, and slowly but surely they're giving me a chance. The goat wellington is the only thing I'm really surprised about with people. Typically when you see goat, it's probably inside a roti, but I find that people are just blowing through goat right now, and it's kind of strange.

Is the Goat Wellington your Trinidadian roots coming through?

There's that and the bread with the pigtail torta, that's called a fry bake, from Trinidad. It's a little puffier the way we do it in Trinidad; we add more water, stretch it, and fry it so it puffs up, I just use less water here so it's flatter. It rises a little bit, but it still has that flakiness, almost like puff pastry. The hot sauce that I put on it is my mom's recipe, and she actually emailed that to me. 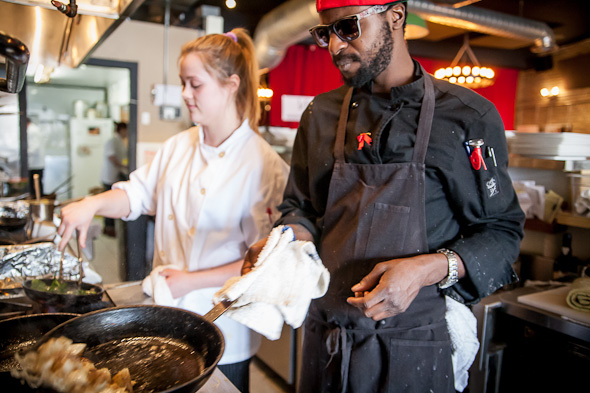 Any other cuisines you're currently obsessed with that influence your menu?

The butter chicken wings is from me growing up in Vancouver eating tons of East Indian food and loving it. With the next menu, I'll probably do a lot more Trinidadian-influenced stuff. I didn't want to label this place with a cuisine, because then you're limited by that. But I feel that in this city, there really aren't any great Trinidadian restaurants. There's lots of shops with lions painted on the walls, with an old lady in the back pumping out rotis, which is great, but I'm really going to try and find some classic Trinidadian recipes and kind of meld it with my cooking background, and see what I can do with that.

How do you keep pushing yourself creatively?

That has a lot to do with me just trying to impress my boys back in Vancouver. I'm trying to get them all to come out here, and really see the scene. For myself, it might sound a little cheesy, but it's all about my mom. She shipped me off here, and I just want to show everybody back in Trinidad that the boy is doing it up and taking some of our culture and throwing it out there. I came to Canada to do something and hopefully take it back to Trinidad, hopefully open up a restaurant there.

I definitely want to start experimenting more with food. I love the egg; I'm working on the egg right now and doing this crazy thing with a tartare. This place has its niche, but it can only go so far with what I have going on. Friday and Saturday nights it's chaos, and I don't think anybody's tasting my food; it's just fuel for the madness. Eventually, I do want to open my own place--a small restaurant--and do some intricate stuff. Hopefully I can get that done later than sooner, because I don't want to rush into anything. I know the city's getting hit hard with any chef that's seen some sort of success opening their own place within a year or two. I want to take my time.

What do you do when you're not in the kitchen?

I have this sweet motorcycle that I like to rip around. I collect records; I used to be a DJ when I was younger, so I still have a lot of them. I play hockey, though a lot of people can't believe that I skate quite fast. And just going over to 416 Snack Bar and tear apart their steam bun. I stroll in there all grimy and shady, ask for a steam bun and a double scotch, and then I'm out in 10 minutes. 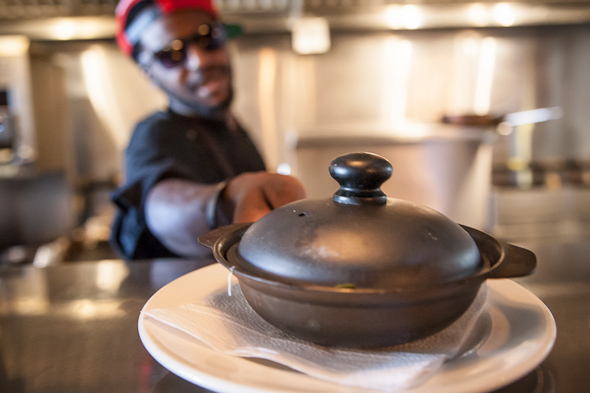 A chef that inspires you? Mark Ota

What's one dish you can't live without? My mom's tomato sauce or fried okra

What would people be surprised to find in your fridge? Something